No one owns the outdoors

Korn Ferry empowers ambitious individuals and businesses to Be More Than: Seize opportunities. Embrace new perspectives. Never stop learning. Be ready. In this series, Korn Ferry interviews people who are living these “Be More Than” principles. 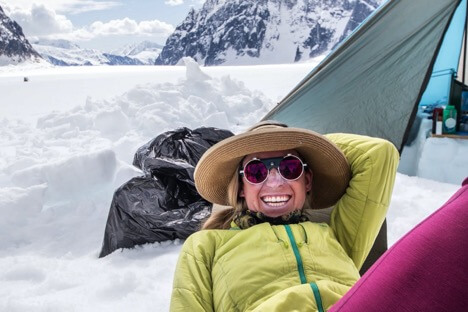 “When I was 26, I had a good job in private equity, but felt like a part of my being was withering away.

That summer, I did a bike trip in Alaska. At the end of it, I met a guy who asked me if I wanted to go sailing in Mexico for four months. I quit my job and went with him. Not long after that sailing trip, I found my way back to Alaska. I worked in a bakery and a cycle studio, doing the bare minimum to support myself so I could explore what Alaska has to offer.

My great-great-grandmother arrived in Alaska in 1899 with the gold rush, and my family stayed. My father was a gold miner. I grew up in Orange County, California, but spent my summers in an Alaskan mining camp. As a child, I learned that there was more than one way to live.

The first time I guided a trip, in 2015, I spent 75 days in Denali National Park. You fly out there and then hike. I realized for the first time that guiding was a job and it opened up a whole world for me. But once I got inside the industry, I began to see gaps. There weren’t any trips up here at the time that catered to women. There’s a particular magic that happens when women are learning a new technical skill together. I wanted to give more people access to that.

At the end of that season, I told a coworker about my idea to start the first women-focused, locally owned adventure company in Alaska. I told him all my fears: being blacklisted by my former bosses if I went out on my own and tried to compete with them, not having enough experience, being an imposter. He looked at me and said, “Nobody owns the outdoors.”

So right there over coffee, we made a plan and priced out all the gear I needed to buy.

My biggest challenges have been internal. I had to learn to live alongside the feeling of being an imposter. I’ve only been guiding for five years, whereas some people have been out here for 30. I felt like a kid coming up to the adults’ table and asking them if they wanted to play.

I use skills I’ve learned from being in the outdoors to address the voice that tells me I don’t belong. When you’re on a backpacking trip, or climbing a big wall, or skiing a big line, you’re in a situation that you chose to be in, but it’s a lot more uncomfortable than you thought it would be. There’s no clean exit; the only way out is through.

You’re not trying to banish the fear or discomfort. You learn how to accept that it’s there, then decide that you’re not going to let it lead. Sometimes after a really hard day in the outdoors, you cry because you succeeded when you didn’t know you had it in you.