Briefings Magazine
From Antiquity to AI: A Stoic Renaissance
An ancient philosophy is making a comeback. But why?
Download

It was early November 2018, and the Woolsey Fire hurtled through the Santa Monica Mountains, devouring hundreds of structures with stunning ferocity. As the fire drew closer and gusty winds changed direction unpredictably, David Heinemeier Hansson, known as DHH, imagined his Malibu Hills home going up in flames. It wasn’t a morbid hallucination. Instead, the Danish programmer turned tech darling deliberately envisioned with pixelated precision the flaky ash his home might become; he played out the years of battling insurance adjusters that would inevitably follow. Without regret or yearning, he simply said goodbye to the hazy sunsets and crystalline memories unfulfilled.

Though in this instance the flames were real, it wasn’t the first time the 40-year-old cofounder of Basecamp, a project management software company, had fantasized losing that which is most precious to him. For years, Hansson has been imagining worst-case scenarios as a way to channel the anxieties that come with running a growing business. (He’s also a father, a successful race car driver, and a New York Times best-selling author.) “As I acquire things, I keep in mind these things could be temporary,” says Hansson, who also authored the programming language Ruby on Rails, which powers web apps like Airbnb, Hulu, and Twitch. “Most businesses go out of business. When I can remove the fear that it’s all going to end, the calmer my life is.”

It’s a practice ancient philosophers termed “negative visualization,” which Hansson learned after entrepreneur and author Tim Ferriss recommended he read A Guide to the Good Life: The Ancient Art of Stoic Joy by William B. Irvine. Stoics also dabble in self-imposed austerity as a means of honing oneself against the hardships of life. So when Hansson finds himself impatient that his Uber is taking five minutes instead of the quoted two, he takes the bus. He eats cheap cheeseburgers and ventures into the cold underdressed. “This modern life that we’re living is smothering us in comforts,” he says. 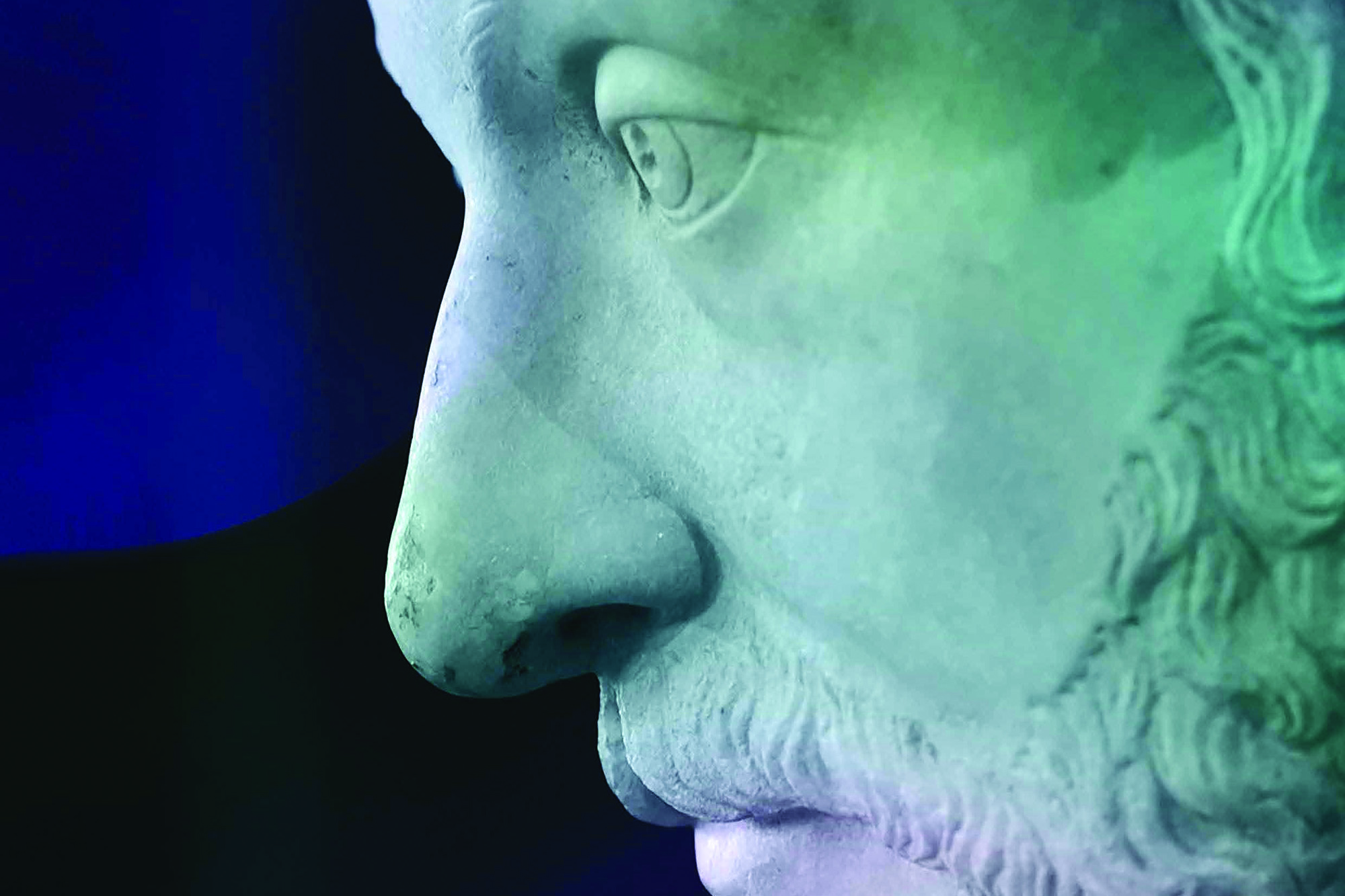 A growing number of people, from gilded elites to everyday folk, are shedding the 21st-century accouterments of comfort in exchange for a Hellenistic philosophy born almost 2,300 years ago that extols the virtues of detachment and discipline. Stoicism is the antithesis to the overly accommodating, snowflake culture of recent generations. It urges adherents to identify what is within their control—essentially only personal character—and to let go of worrying about all that is external, whether that be a natural disaster or another’s expectations. Proponents say eudaimonia, the Greek word for prosperity and well-being, can be found in the virtues of courage, justice, and wisdom, rather than worldly success.

Of course, the philosophy does have its critics; some call it outmoded, others a hollow life hack. But advocates point out that today’s modern brand of Stoicism has spread broadly and briskly—from its Silicon Valley adopters to the worlds of sports, military, and media, to name a few. Almost every week a new book is released on the topic. But why, after two millennia, is Stoicism seeing a resurgence now? And does it deliver on its promise of greater purpose?

While today the word “stoic” is most often employed as a lowercase synonym for emotionally aloof, the term originates from the Greek name Stoa Poikilê, which refers to the muraled porch in Athens where the intellectual seeds of Stoicism first germinated. Around 300 BC, in the wake of Plato, Aristotle, and Socrates, a philosopher named Zeno of Citium began holding public discourse on the veranda’s steps. Stoicism would go on to spread to Rome as the reigning school of thought for half a millennium, greatly influencing Christianity.

The Stoics taught that virtue is the only good worth striving for and everything else—whether it be health, wealth, or other worldly pleasures—is indifferent. Preferable, perhaps, but not worth chasing. Since outcomes are uncontrollable, the emphasis is placed on intention and action. This may sound familiar if you’ve ever heard the closing prayer recited at 12-step meetings: “Grant me the serenity to accept the things I cannot change, the courage to change the things I can, and the wisdom to know the difference.”

After the fall of the Roman Empire, Christianity and theology eclipsed Stoicism and philosophy. But throughout the centuries, countless leaders and artists, from George Washington and Bill Clinton to Shakespeare and J.K. Rowling, have returned to its teachings for guidance. While many Greek and Roman philosophies from antiquity remain frozen in the past, this one has proven to be easily adaptable.

Seven years ago, a small group of academics and psychotherapists in London organized the first Stoicon conference in an attempt to bring Stoicism into the modern era. The annual meeting has since traveled to New York, Toronto, and Athens, growing year after year. There are dozens of Stoic Facebook groups, with tens of thousands of members looking for advice on parenting, teaching, dating, and athletic competition. Ryan Holiday, the former marketing director for American Apparel, has published several New York Times best-selling self-help Stoic adaptations, attracting a cult following among society’s highest rungs.

“Stoicism is roughly one part theory and nine parts practice,” says Massimo Pigliucci, a biologist turned philosophy professor at City University of New York, who earlier this year published A Handbook for New Stoics: How to Thrive in a World Out of Your Control. “It’s explicit. You don’t have to have a background in philosophy to incorporate it into your life.”

Without doubt, Stoic-esque techniques circulating Silicon Valley have garnered the most attention, including fasting, cold showers, and silent meditation retreats. For some, these practices can serve a purpose in building resilience; others say they can also amount to little more than virtue-signaling when Instagrammed from a multimillion-dollar Victorian.

Pigliucci started his career studying how genes interact with the environment. He waltzes between the worlds of nature and nurture, which is where Stoicism has come to reside. It’s about controlling base reactions and stripping away external values that put us in conflict with ourselves and others, so that it’s possible to, as the Stoics say, “live in accordance with nature” internally, socially, and physically. To update Stoicism for a contemporary audience, Pigliucci and others simply swap its divine cosmology for evidence-based research.

What Stoics call “turning the obstacle upside-down” and “the view from above” are reframing techniques, which form the foundation of cognitive behavioral therapy, one of the most scientifically proven and widely practiced psychotherapies. So what if I don’t make my numbers? Or if I lose all of my wealth? As Epictetus, the freed slave and notorious Stoic, wrote, “It is not events that disturb people, it is their judgments concerning them.” The argument is that when we can reframe the minutiae of life in a broader context, it helps to bring into focus what matters most.

When entrepreneur and venture capitalist Brad Feld, cofounder of Foundry Group, a large venture capital firm in Boulder, Colorado, began sinking into a deep depression, he says his life preserver came in the form of Stoicism and therapy. He later sent Holiday’s book The Daily Stoic to all the CEOs in his portfolio. “It completely changed my relationship with what is happening, what I think is happening, and what I want to happen,” Feld wrote in an email.

Executive coaches have also begun incorporating Stoic frameworks into their work with clients, saying it reduces anxiety and makes for more nimble leaders. “The trouble is most people want to change it, control it, avoid it. The last thing they want to do is accept it,” says David Langiulli, who, from his base in Naples, Florida, specializes in nonprofit leadership development. “When you accept, you can take powerful action.”

Not surprisingly, some big names have criticized Stoicism, including Sandy Grant, a University of Cambridge philosopher. “The problem with this attitude is that it can lead us to accept things that we shouldn’t,” she wrote in an op-ed. Others say some of the more well-to-do adherents are simply inauthentic, allowing those at the top to dismiss the impact socioeconomic circumstance has on well-being. It’s one thing to fast for 24 hours, but try telling someone without access to clean water, healthcare, or housing that those are just trivial externals.

Still, scholars say the Stoicism renaissance is understandable if you compare modern times to when the philosophy reigned. In the centuries before the fall of the Roman Empire, there was cultural transformation and distemper that in some way resembles the current zeitgeist. There was uncertainty. Massive inequality. A series of ongoing and controversial wars. Flourishing religious fanaticism and anti-intellectualism.

Whatever the reason, advocates say a form of Stoicism appears to be reaching the very top of corporate structures, especially as the so-called purpose movement expands. An example may be the well-publicized letter that nearly 200 CEOs signed earlier this year that redefined “the purpose of a corporation” away from just shareholder value. Instead, the leaders say companies must have higher guiding principles, such as protecting the environment and treating employees and suppliers with dignity.

Or as Hansson—who in the end didn’t lose his house in the fire—puts it, “If my purpose is simply to make my business as big and profitable as possible, that’s a terrible guiding principle for why I’m on earth. Stoicism helps us answer the question: Why are we here?”

New research is laying out the skill sets CEOs need, including many their predecessors didn’t.
Read More
Briefings Magazine

The speed of medical advancements is tremendous. The ability to implement them is not.
Read More
Briefings Magazine

Electric Vehicles: The Race for Lithium

Lithium is not a rare mineral, but thanks to the growth in electric vehicles it is suddenly an in-demand one. Can producers keep pace?
Read More
Sign Up for our 'This Week in Leadership' email