2019 could be a record-breaking year for initial public offerings—if investors can be convinced. Two big IPOs from the past may offer some lessons.

The problem:
IPOs are high-stakes events that are closely watched not only by the investment community but other stakeholders. Navigating them poses several challenges.
Why it matters:
The longer-term success of firms such as Uber, Airbnb, and WeWork may hinge on early communications surrounding their IPOs.
The solution:
Align the corporate communications and investor relations teams well to create a synchronized business and brand messaging strategy.

\When Alibaba went public in the fall of 2014, investors were gaga over tech companies, ready to pour millions into several big-name IPOs. But as a relatively unknown company in the United States, Alibaba had a problem—it was labeled China’s version of another, more familiar digital retailer: Amazon.

That couldn’t have been more wrong. Amazon is primarily a marketplace that sells products to consumers and takes a cut. Alibaba brands set up and operate their own stores. That created quite a challenge for Jim Wilkinson, who as Alibaba’s senior vice president and head of international corporate affairs led communications efforts around the company’s IPO: How do you get reporters and investors to understand the nuances of its business model and brand position?

“IPOs are not just purely financial events. They are major reputational events as well,” says Wilkinson. “Some part of every company’s valuation is tied to reputation, which means communications is central to its P&L.” 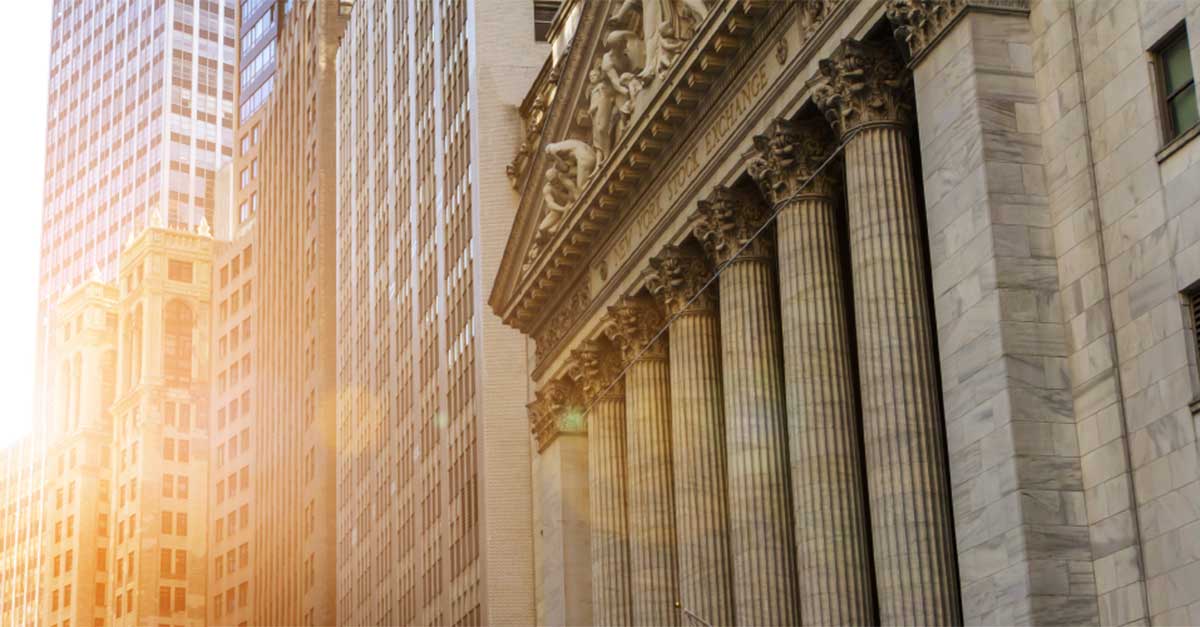 Flash forward to the year 2019—which may well be the year of the IPO in an unprecedented way. If all goes as those on Wall Street expect, more than 150 companies will launch IPOs, including household names such as Uber, Lyft, Airbnb, WeWork, and Slack. In all, the IPOs could raise by some estimates the staggering sum of $100 billion— practically the gross national product of New Zealand. All of which raises the stakes and pressure enormously for these firms’ communications and investor relations departments. The mission: get as much buy-in as possible from an investor community that has become more demanding and critical of deals.

According to Richard Marshall, global managing director of Korn Ferry’s Corporate Affairs and Investor Relations practice, “An IPO in today’s market is very different than it was a few years ago.” Investors scrutinize a wider range of things like culture, diversity and inclusion, and environmental and social sustainability. “Numbers are only part of the story now,” he says.

What’s more, swings in the markets are both huge and frequent, with investor patience and sentiment seemingly changing from week to week lately, creating whiplash for firms going public. And, as many early start- ups have discovered, going public is only the first key step in building an all-too-critical relationship with Wall Street, especially its analysts. “You need to have a more thoughtful communications strategy,” says Marshall.

All of which sends us back to take a closer look at how some of the highest profile and most successful companies pulled off their IPOs and have managed them beyond just the IPO event. For this, we heard from two of the biggest names—Alibaba and Pandora—and the listings director at the New York Stock Exchange.

“The test isn't going public, it is the 12 months after."

It was the summer of 2011, and the music streaming service Pandora had garnered quite a bit of attention as the next big “disruptor” of the music business.

The attention was such that, as IPOs go, the firm would have it pretty easy. In fact, investor demand was so strong during its road show that Pandora raised the offering price a few times. On its first day of trading, investors sent the stock up nearly $3 per share, valuing the company at almost $3 billion.

But Dominic Paschel, who as Pandora’s vice president of corporate finance and investor relations led its IPO, says there were issues from the start that would later dog the company. Among them, investors and the media had the wrong thesis.

“We had to repeatedly lean into communicating that we were disrupting traditional radio, not music as a whole,” says Paschel, who has also taken part in IPOs for enterprise software companies Salesforce and SuccessFactors and now serves as senior vice president, global communications, for the data management platform Yext. “People thought we competed against iTunes or their CD collection.”

To some degree, now nearly eight years later, Pandora continues to try to shake that narrative. Shrinking usage, difficulty turning a profit, and competitors like Spotify, which went public last year, also factored into the equation. In February, satellite radio provider Sirius XM closed its acquisition of Pandora at a per-share price less than half its IPO price.

One of the lessons Paschel took away from the experience is that organizations planning an IPO need to spend as much if not more time with the sell- and buy-side analysts who are going to cover the company as they do with the investment bankers who are going to take it public. That means changing the historic mindset of hiring into the investor relations function after the IPO. Instead, Paschel says, smart firms are hiring IR teams a year or more before they plan to go public.

“They are realizing that the test isn’t going public, it is the 12 months after,” says Paschel, “so they are building the infrastructure earlier rather than later.”

Some of the biggest IPOs expected in 2019 include: 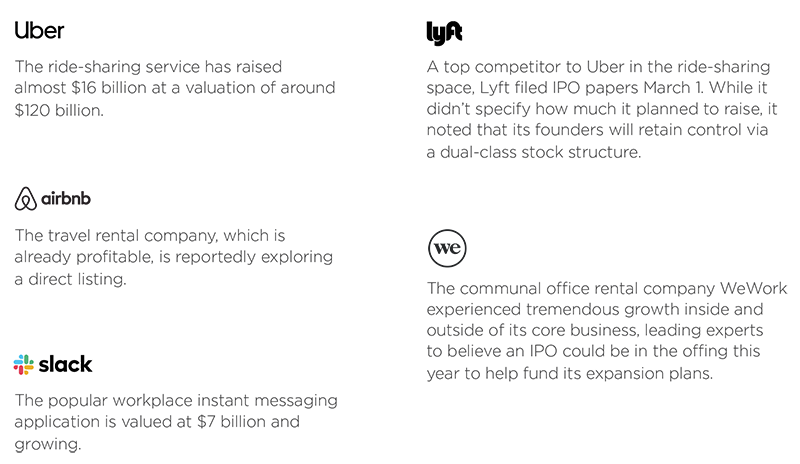 Put another way, organizations are starting to understand that during an IPO “they only date the banker—they marry the analysts.” And, like marriages, it takes time, effort, and patience to understand each other fully. The more organizations can better educate analysts on their business and culture when private, the more analysts will understand how to value it when public.

Linda Pazin, regional head of global listings for the West Coast with the New York Stock Exchange (and the former investor relations officer and chief communications officer at Live Nation Entertainment and Deckers Brands), says one reason organizations are hiring IR teams early in the process is to have them work with the CEO, the CFO, management teams, and banks to help develop and succinctly tell their story to all stakeholder groups. This is particularly true during an IPO road show, when the company is looking to gain interest among potential investors in its long-term strategy and vision. With the emergence of new listings mechanisms such as a direct listing, it is also important for company management teams to work together to assess the path to the public market that is right for them. A direct listing is ideal for companies with a known brand that does not need to raise capital, but instead is looking for a liquidity event for existing shareholders.

“Every company must choose the path that is right for them, as it’s not a one-size-fits-all scenario for companies looking to enter the public market,” says Pazin, who advises companies valued at $2 billion or more on marketing, financial reporting, and governance issues pre- and post-IPO.

“Working together under one executive could be a winning combination."

Another emerging trend that underscores the importance of investor relations and communications is the rise of Exchange Traded Funds, known as ETFs. The funds, which are basically stocks that track entire markets, sectors, or groups of assets, make it exponentially more difficult for organizations to tell who is trading their shares. The communications side of the house needs to be able to translate such financial nuances to the media just as well as the IR team translates them to shareholders and management.

But often things get lost in translation. Organizations that can tell a story that combines strong financial insight with the ability to communicate it in plain language could have a competitive advantage in an IPO. For this and other reasons, Paschel says it might make sense to combine the corporate communications and investor relations teams into one function, reporting to one C-suite member. Historically, they have been separate. “Working together under one executive could be a winning combination,” he says.

Editors love stories about how many new millionaires a big IPO, particularly of a tech start-up, created. Another go-to IPO story is how much senior leadership is worth after the first day of trading. These seemingly innocuous stories actually pose a communications challenge. They breed jealousy.

“One of the biggest problems in an IPO is not how much money people make, but the potential for the new life as a public company to change the company’s culture,” says Wilkinson. Going public, Wilkinson says, creates pressure on executives to drive results and meet numbers. “Your team members are the people they are spending most of their time with, and you need to be focused and engaged—otherwise they will just think their leaders are there to make millions and leave. The culture can’t change.”

That’s why Wilkinson, who has his own communications and IR advisory firm, TrailRunner International, says one of the most critical but also most overlooked aspects of IPO planning is internal communications. “Employees are on guard to see if and how the company is going to change once it is public,” says Wilkinson, whose firm worked with Spotify on its IPO last year. “Making sure you don’t change the culture is crucial. Employees need consistency, and they need to work for an organization that has values and is doing something important for the world.”

The story organizations tell analysts, consumers, employees, and investors can directly impact the success of IPOs and the future of the company. Here are some areas corporate communications and investor relations teams should keep in mind.

Some part of a company's worth is tied to what people think of it.

Don’t waiver from the organization’s purpose and values after becoming a public company.

Align financial and brand messaging to create a unified narrative.

Spend time going over your business model and culture with analysts and reporters who are going to cover your organizations pre- and post-IPO.

Pazin of the NYSE agrees, saying that as the competition for talent becomes a bigger part of an organization’s focus and strategy, culture becomes an even more important element for communicating stories. “Today, we are seeing an increasing number of technology companies come to market with a strong mission and sense of purpose. IPO day is no longer just for the C-suite, but about celebrating the successes of the entire workforce to reach this milestone and commit to delivering against their long-term strategy,” says Pazin.

Perhaps that’s why ride-sharing service Lyft explicitly listed loss of company culture as a risk factor in a recently preliminary filing. More pointedly, it said, “We believe that our company culture, which promotes authenticity, empathy, and support for others, has been critical to our success ... if we cannot maintain the culture as we grow, our business could be harmed.”

Wilkinson believes some of Alibaba’s successful listing on the NYSE is tied to how the company’s strategy aligned with its culture. Wilkinson stresses that Alibaba is a company with strong values and principled leadership. As a foreign company, it remained consistent with the regulations it was governed by in multiple countries and the political and economic environment in which it operated. It fell to Wilkinson and his team to make sure US-based analysts and reporters who were going to cover Alibaba pre- and post-IPO understood that.

Wilkinson says that working hand in hand with the finance team also contributed to Alibaba’s IPO success. Despite being the most heavily hyped IPO by the media and others since the Facebook IPO, the partnership helped to tell a “methodical and disciplined story to investors,” he says. Clearly, it worked: Alibaba raised $22 billion in its IPO, which still stands as the largest public initial public offer debut ever.

Perhaps until this year?