Great digital leaders possess traits that are easy to overlook or misunderstand. From First Data to Clorox to S&P Global, here are tales of avoiding a critical trap.

The problem:
Change is happening so quickly that organizations can't develop the next generation of leaders fast enough.
Why it matters:
An organization's ability to survive and thrive amid constantly changing business conditions hinges on its people.
The solution:
Adjust talent identification, development, and retention strategies to where the business wants to go, rather than where it is.

It took a simple idea to create a game-changing technology—for fast-food chicken lovers. Two years ago, Chick-fil-A launched an app that let devotees of the brand’s juicy chicken sandwiches preorder and pay from their phones, avoiding lines at the chain. In the first three days alone, a million people downloaded it.

Today, of course, many companies have repeated this “skip the line” technology, but the idea didn’t come from a garage in some Silicon Valley backyard—rather, it was developed by the $12 billion payment processing company First Data. It assigned what it calls its Young Professionals Employee Resource Group (YoPro) and its Innovation Lab to work on an “action-learning project” to improve the customer experience. “As we transition from payment processing to technology, we are relying more on early career professionals to underpin the work of our senior leaders,” says Anthony Marino, executive vice president and head of human resources at First Data. In short, the company has made an impressive cultural shift. 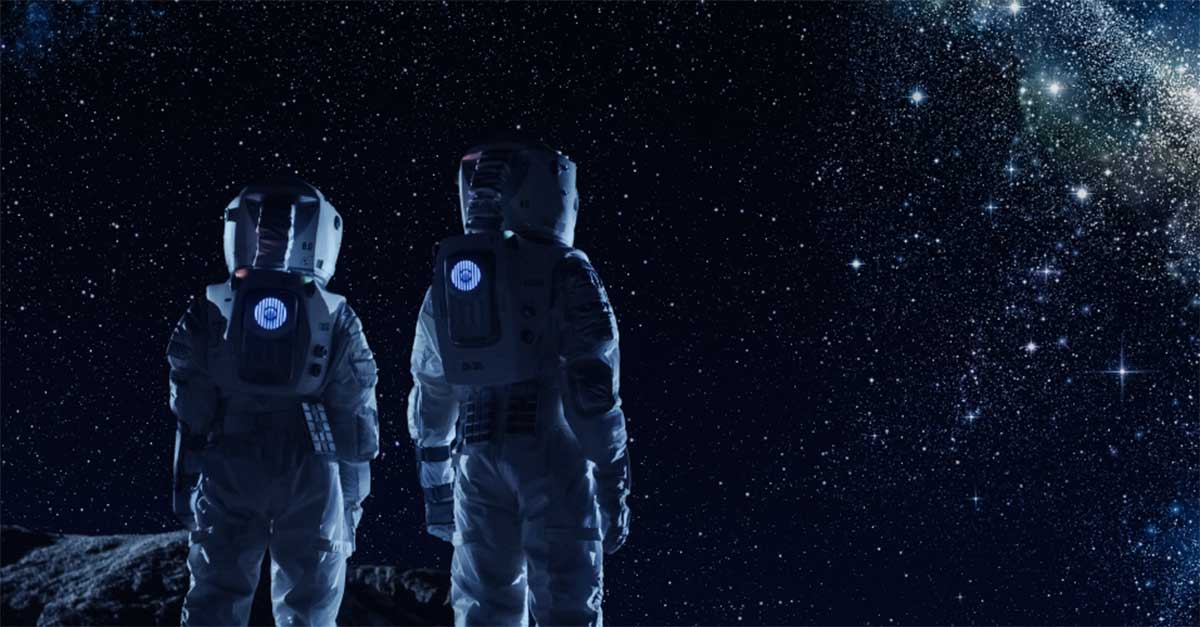 Such shifts, though, have apparently eluded the vast majority of firms today. To be sure, organizations are spending massively on tech to keep up with the pace of business change. But it turns out many of them tend to emphasize process—not the people behind it. As Melissa Swift, a senior client partner at Korn Ferry and leader of the firm’s Digital Advisory, puts it, this critical mindset shift has been “meaningfully neglected” in favor of old versus new hiring and development models.

Indeed, often the talent that doesn’t seem to fit the mold is the very one that does, she says. The wrong stuff may very well be the right stuff in the complex world of digital transformations. “Businesses need talent strategies for where they want to go, but too many are still recruiting for where they are,” says Swift.

“The goal is to create the right learning opportunities to develop a pipeline of leaders.”

Historically, as companies got larger and more complex, they focused on creating autonomous groups of people and minimizing risk. The result: hierarchies, traditional rewards, static teams, and closed ecosystems. But research shows that digital sustainability—an organization’s ability to continuously adapt and thrive amid constantly changing business conditions— requires precisely the opposite: a much more agile, team-based methodology.

Fostering this kind of culture requires an entirely new approach to leadership. “As the human resources function becomes more integrated with operations, specialists are becoming more of a partner in identifying the type of knowledge and skills, rather than experience, needed for success,” says Ashley Inman, a member of the Society of Human Resources Managers and part of its Talent Acquisition Panel, which develops best practices on workforce planning, recruitment, and retention.

Such changes can occur in the unlikeliest places. The Clorox Company, for example, is about as far from a tech firm as you can get. It sold one product, bleach, for more than a half-century before diversifying into charcoal, cat litter, salad dressing, and more. But that doesn’t mean it isn’t a digital company. Digital sales account for about 5% of Clorox’s $6 billion in annual revenue; more than 50% of its advertising and marketing budget is in digital; and investment in innovation continues to drive upward of 2% incremental sales growth annually. “Digital has to be one of our core capabilities,” says Rick McDonald, vice president of global operations at Clorox, who cites as an example that the company now employs around 40 “digital scientists” to analyze consumer data alone.

Companies across industries are changing the way they recruit and develop talent to amplify their digital leadership pipeline. Here are some ways First Data, Clorox, and S&P Global are addressing the challenge. 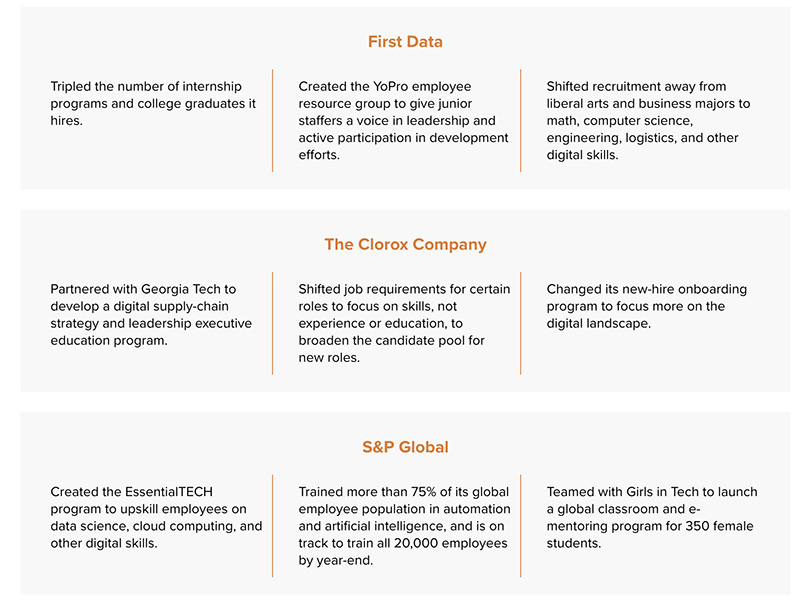 But the company was just as aggressive on the recruiting side, shifting or waiving previous prerequisites for positions, such as educational background. McDonald says the onboarding process for new hires has also been tweaked to focus more on the company’s digital tools and architecture. The result: Clorox now ranks above average for high-performing companies on the Towers Watson index of sustainable engagement, which measures workers’ level of engagement and commitment to stay at their current company.

“The goal is to create the right learning opportunities to develop a pipeline of leaders that matches what we expect our digital architecture and capabilities to look like in the future,” says McDonald.

New ways of working require new ways of evaluating the work histories and character traits of talent. Here are some red flags of the past that may now signal something different.

The company carousel on some resumes could represent job-hopping. But it could also signal the “pioneer mentality” that characterizes digital leaders.

A seemingly unconnected arc of companies and positions could actually represent the high tolerance for ambiguity that many digital leaders need.

A lack of brand-name employers on a resume doesn’t mean the candidate isn’t ready for the big leagues. It could mean he or she was curious enough to try something new.

Staying with one company could still mean loyalty and commitment. But it could also mask the lack of learning agility today’s digital talent needs.

The right leadership, of course, plays an important role in all this change. And here may be one of the biggest changes companies face. “The traits that make for great digital leaders don’t look good on a resume,” Swift says.

She says, for instance, digital leaders have a “pioneer mentality,” meaning they show higher levels of curiosity, adaptability, and risk-taking than others in assessment tests. On a resume, those traits could look like job-hopping, positions lacking a linear narrative, and fewer “brand name” employers. In the past, 10 years of experience in the same role at one company may have signaled stability; now it could mean a lack of learning agility.

What’s more, contrary to the Silicon Valley archetype of what a digital leader looks like—i.e., a white male millennial with a “move fast and break things” mentality—Korn Ferry research shows such leaders are far more inclusive and rate higher on emotional intelligence than the norm.

Still, it isn’t easy for recruiters to decipher what traits are embedded in a one-page resume. Many organizations, therefore, are turning to artificial intelligence for help. Data and analytics company S&P Global, for instance, is using artificial intelligence to look for patterns in certain areas where it has both high attrition and engagement. S&P Global employs roughly 20,000 employees in Australia, China, India, the United States, and 27 other countries. “We’re using AI to recognize patterns within data sets to highlight trends and tie them together in a way that tells a story,” says Dimitra Manis, S&P Global’s executive vice president and chief people officer.

To be sure, a large part of S&P Global’s vision for “Powering the Markets of the Future” involves funding and training for new digital technology. The company plans to double the amount of technology investment devoted to what it calls “EssentialTECH.” S&P Global recruited Manis in part because of her extensive background in assessing the talent and culture of potential acquisition targets while at Thomson Reuters, AXA, and other companies.

Manis says a recent $550 million acquisition of the data analytics and machine intelligence company Kensho will help accelerate innovation and serve as a key pillar of S&P Global’s EssentialTECH training program, which aims to align the company’s entire workforce around data science, cloud computing, and other digital skills to meet the rapidly evolving needs of its customers. The scale of the effort alone, needed in this age of fast digital change, is impressive. Within EssentialTECH’s first nine months, more than 75% of the company’s global employee population have been trained in automation, AI, and other technology courses, and the program is on track to engage all 20,000 employees by year-end.

“Everyone needs to understand and use the same language around technology,” says Manis. “At S&P Global, we are putting people first by investing and building in these new capability areas.”