Briefings Magazine
The Data Deliverer
One year into the job, the CEO of Hewlett Packard Enterprise aims to give the world more leverage over data.

On May 17, Hewlett Packard Enterprise announced that it was acquiring supercomputer maker Cray for about $1.3 billion. It's another of a string of acquisitions HPE has made under CEO Antonio Neri. But, as Neri told Korn Ferry recently, HPE's success hinges not on its computing power, but its talent and culture.

Antonio Neri sits down in the conference room wearing what could be described as “engineer-chic,” a purple and white checked button-down shirt tucked into jeans. The wardrobe reflects Neri’s career path. At age 28, the Argentina native started at a Hewlett-Packard call center answering complex technical problems for business customers. Twenty-four years later, he’s the CEO of Hewlett Packard Enterprise, the three-year-old, $31 billion business-technology-focused offshoot of the iconic Silicon Valley firm.

HPE, as it’s known in the industry, is focusing on the more than 2.5 quintillion bytes of data gathered worldwide every day (enough to fill 55 million DVDs) by company computers, smartphones, and every other internet-connected device. HPE develops servers and software that help people store and interpret all that data. “People who can extract insights from data faster will end up winning,” Neri says. While the business is not as straightforward as, say, designing computers and printers (that’s what the other spin-off from HP does), there’s little doubt that the world will produce ever more data at an increasing pace.

Neri spent his first year in the role making several acquisitions to set up HPE’s strategy. Now, he says, the firm has to execute. That involves finding and retaining top talent and remodeling HPE’s culture. After years of seeing management shake-ups and failed strategies, HPE employees need to feel like they work at a place that allows them to innovate and excites them about the future, Neri says.

That’s why he personally helped design HPE’s new headquarters, a six-floor building along the waterfront in San Jose, scheduled to open in early 2019. He picked out the colors (whites, grays, and walnut), approved the floor plans (lots of open space), selected the windows (their panes automatically darken as the sun gets brighter), and even co-designed the sculpture in the main lobby (three people coming together, surrounded by water). There’s a cliché about micromanaging bosses measuring the drapes, but Neri believes the new headquarters should be the embodiment of HPE’s culture. “We need to make this place a fun place to come and work, and give [employees] the ability to fulfill their dreams,” he says. 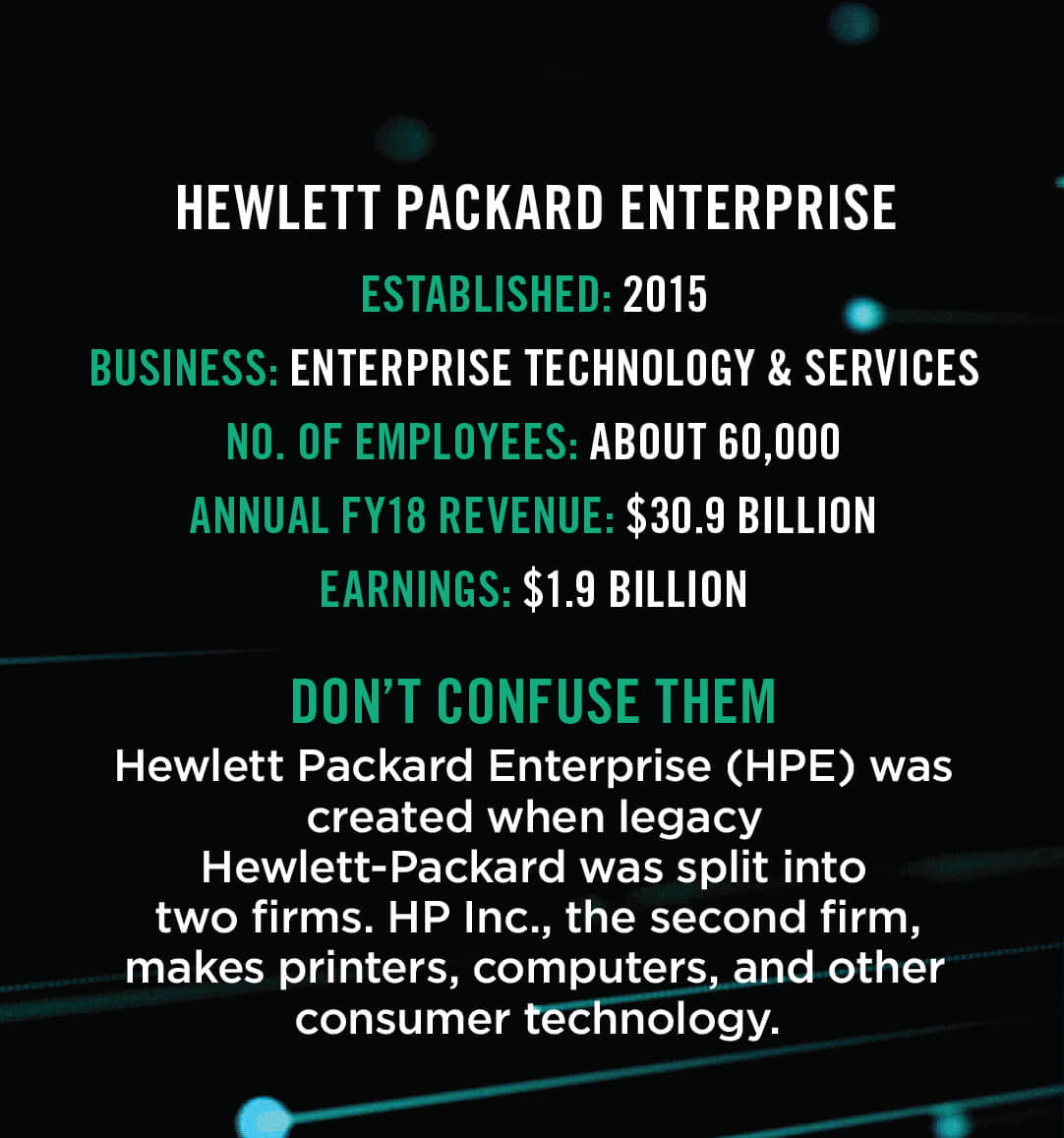 Korn Ferry spoke with Neri to find out about his path to the top, the importance of employee culture, and why he says the CEO job is lonely but not stressful.

How did you wind up at the original Hewlett-Packard?

I moved to Holland, and this opportunity came along to apply my skill sets, which at the time were around PC client/servers. They were looking for people who understood that architecture and spoke Spanish and Italian, which at the time in Holland was rare to come by, so it was the perfect combination. I never imagined I would be the CEO of the [spin-off] company 24 years later.

Which role most prepared you to be CEO?

I really treasure and appreciate that first job because of the customer centricity. I was speaking to customers eight hours a day, taking 20 to 22 calls. You’re solving problems and building a connection with them. You also learn how the company operates. But it all came together in jobs where I was running a whole business; as a general manager, you own the end-to-end execution of it. It gives you the understanding and the scale to operate at a CEO level.

No HP-related firm has had an insider as CEO since 2000. Why was it important to the firm’s board to pick an insider?

Meg Whitman, the former CEO, was very clear that the next CEO should come from the inside. [HPE], after the spin-off, became very technology driven. Learning the company from zero would be a hard thing to do.

Plus, all of the transitions from the outside hadn’t worked very well. The board wanted to reinstate some of the old Hewlett-Packard values that had been lost along the way. But my promotion wasn’t a given. I became president of the company in June 2017. It was clear that there was going to be some sort of CEO transition eventually, but the board wanted to keep open its options. I had to build relationships, and the board developed a comfort level with me.

You became CEO barely a year ago. So why are you already thinking about who will replace you?

I’m not going to lock myself into a certain time frame. But, at some point, there is a diminishing return. I truly believe you need to bring the next generation forward. People saw my potential and spent time with me. I want to do the same.

You say the CEO job is the loneliest job in the world.

All decisions eventually end up with you. On one side, you run the company. On the other, you run the governance with the board. You have to manage those aspects all the time.

You don’t seem too stressed about it.

I enjoy the hard things and working with our teams to tell a story. I’m optimistic by nature. I enjoy life. I don’t live to work, I work to live.

Many CEOs come in and make big, strategic changes, but you are not. Why not?

I had been working hand in hand with Meg for six-and-a-half years. The strategy was co-developed by me, Meg, and the board. We now have to execute.

How are you going to find the highly skilled talent to execute your strategy when tech firms big and small are looking for the same thing?

Competing for talent in the Bay Area is a war. We’ll offer subsidized food and all the amenities. You have to get the basics right. But, importantly, you have to excite people about the future. People want to come to a company where they are going to win. You have to give them a career path.

But attracting talent is not the biggest issue, it’s retaining it. It’s easy to find a job. There’s a shortage of supply of talent in certain areas. Cybersecurity is a problem. AI is a problem. You have to give people a long-term view of why they should stay at the company. It’s not just money. Money is one component, but it’s also about an employee’s ability to do things and grow.

So that’s what keeps you up at night, retaining the talent?

To me it’s more about the culture. If you ask me what my legacy will be, yeah, they’ll measure me on shareholder return and all the things that CEOs are measured on. But the measurement I will look at is how I made this company relevant and brought a culture that is unique that can attract and retain talent. All the other stuff you figure out along the way.

Why does the culture need to be changed?

During the last seven-and-a-half years, employees went through a lot. At one point there were three CEO transitions in 10 months. There were things from a benefits perspective that were not done. There was a constant churning of spin-offs, mergers, and separations. What employees see now is a purpose-built company with a clear purpose with a clear set of values with a clear strategy. And over the last 12 months we’ve done many benefits and cultural changes to reinvigorate the environment.

How does this new headquarters play into that?

Restating our image inside our buildings is a big deal. It has to reflect our three values: Partner. Innovate. Act. The interior was designed by me.

You really picked out the colors?

The colors. The carpets. The layouts. You’re going to see a sculpture outside the lobby that I designed with a friend of mine. You have to go by, you can’t miss it.

A New Korn Ferry survey finds the uniqueness of the pandemic is bringing out empathy in managers.

Clustering tech operations made sense—until the pandemic threatened to shut down firms’ access to their networks.

Who Do You Want to Be?