A surprising number of firms are asking workers to return to the office—and meeting plenty of resistance. Will there be a revolt if leaders push it?

Jon Passman is, in many ways, a great corporate employee. Since he started at his current employer in 2017, he has trained three software project teams from scratch to support a successful multimillion-dollar product launch. When he isn’t training others, he’s managing 20 software coders across several states and two countries.

Even the pandemic didn’t really slow him down; since mid-March, working from a desk in his laundry room in suburban Chicago, he and his team have made all their deadlines. “I feel like I haven’t missed a step,” he says.

But right now, there’s one thing the 47-year-old says he will not do for his employer: go back to the office. It’s not about having to wear a mask all the time (he can do that) or having to commute again (it’s only 20 minutes each way) or having to social distance from his coworkers. It’s his kids he’s worried about. His 14-year-old daughter is spending at least her first semester of high school online, and he’s uncomfortable leaving her, let alone his 11-year-old son, home alone all day. His company hasn’t given anyone any deadlines yet about returning to the office, but Passman has no doubts what he’d say now. “If they were to demand that I come back tomorrow, I would have to say no,” he says.

From the annals of Harvard Business Review to the teachings of former CEOs and board members, there has always been a wealth of well-regarded books, case studies, and seminars about motivating employees to work. But the greatest minds in business have never quite had to deal with this: What happens if a large chunk of loyal, hardworking staff members, or even your entire workforce, simply refuses to return to your offices? Indeed, gripped by fear of a deadly pandemic and now fully comfortable working at home for months, employees at all ranks are openly questioning a host of companies’ little-publicized plans to reopen offices—plans that CEOs and other leaders see as a critical step for returning to normal operations. Experts worry that corporate leaders don’t recognize the extent all this may reach, and already in recent weeks they’ve had to unravel some plans, hoping to avoid more friction from workers. For Jacob Vigdor, a public affairs professor at the University of Washington and researcher at the National Bureau of Economic Research, it’s all very complicated and unnerving. “There’s not a single action that you can take that will satisfy everybody,” he says. 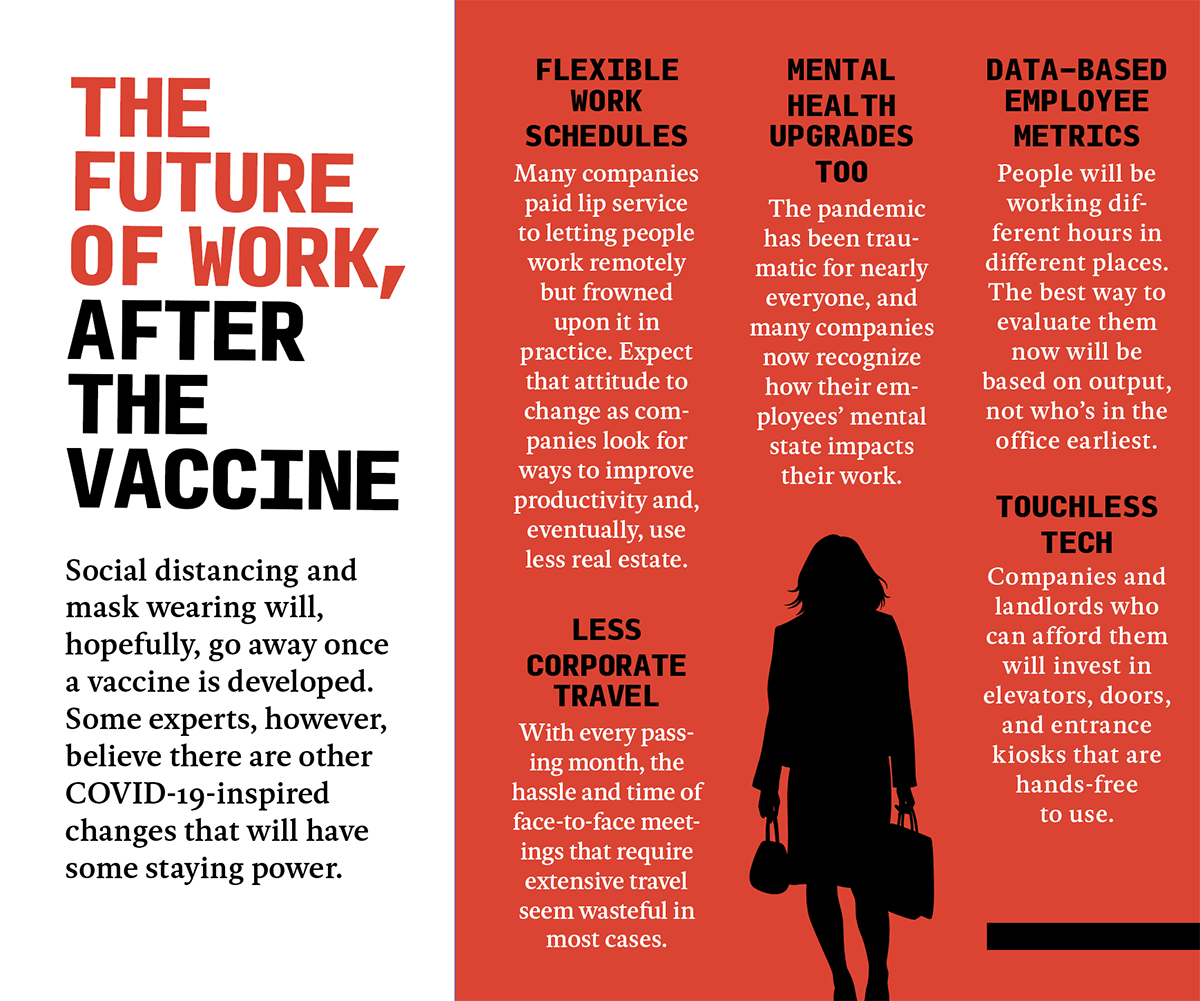 At a minimum, the likelihood of all this mounting is only growing. Although headlines are focusing on firms that will be working remotely for the long term, a significant number of organizations are moving in the other direction. Big-name firms in key sectors like finance and retail, along with parts of the federal government, are reopening home offices and branches, albeit in stages and with heavy modifications. In one recent Korn Ferry survey, more than a fifth of professionals said they were going to be back in the office after Labor Day, while another 31 percent said it was possible. These firms were working on safety protocols and emphasizing that they want only volunteers to come back first. But experts say employees who fear for their career advancement prospects, or even their jobs, will feel pressure to come back.

The case on either side is easy to understand. On the one hand, some employees fear for their health and safety, or another upheaval in their work-life balance. And some don’t want to go back because they’ve found remote work is more productive. On the other side, organizations have billions of dollars tied up in office leases and other real estate costs they can’t easily get away from. Plus, many organizations generally do not support the concept that all work can be converted into “home work.” They and many experts believe people thrive better working together face-to-face, leading to new products and new collaborations. “The casual interactions at the office actually provide a lot of support, both professionally and personally, for employees,” says Mark Royal, a senior director for Korn Ferry Advisory.

To some degree, experts say that unless there’s a disability or family-leave issue involved, companies have wide latitude to require people to work from a certain office as a condition of employment. The question is, should companies be that strict? And if they were, what might happen to the rest of the workforce? “You might want to be reasonable,” says Christopher Bacon, a Houston-based employment lawyer who works with corporate clients. “It’s probably good business, especially if you have good employees.”

It’s well known, of course, how we got here. During the COVID-19 crisis, companies staged a D-Day-like campaign to get workers home and safe, while providing the tech support they needed to work. Many leaders marvel when looking back at what their staffs did. The UK’s National Health Service, which had debated for 10 years how telemedicine would work, took just one week this spring to get thousands of doctors seeing patients virtually. One week was downright slow compared to what Passman, the software manager, experienced. On a Thursday in mid-March, his employer emailed him and all nearby coworkers that there was a case of COVID-19 somewhere in their office building and they had five minutes to pack up their belongings and get out. By Friday, Passman was working effectively on his company-issued laptop. 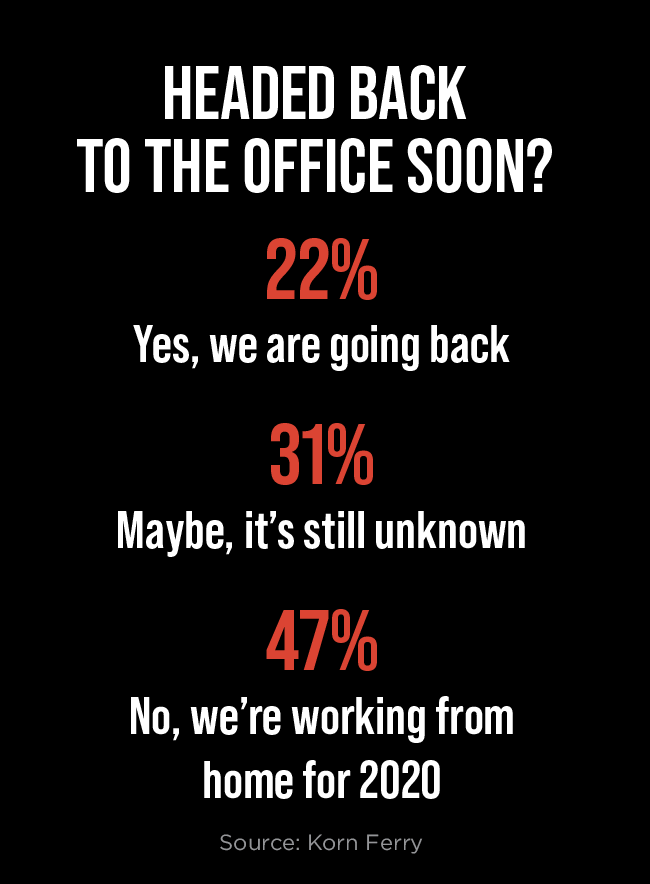 But putting all this in reverse is going to be an entirely different matter. Sure, some workers are eager to get out of the house and into the office, for various reasons. But far more fear the risk. What’s more, organizations must track what local governments are allowing in terms of people in one place. They will also need to do some redesigning to incorporate social distancing and other measures recommended by government healthcare agencies to curb the virus’s spread. Companies that don’t “risk a myriad of lawsuits” if employees were to contract COVID-19, says Bacon.

There are less obvious changes to be made as well. Along with helping its clients redesign their offices, for example, the Boston-based design cooperative Bergmeyer has been retooling its own workspace to get its 85 employees back on-site. Some employees volunteered to return early to test the initial changes. When it came to video calls, the volunteers found that their on-screen images were impossible to see because there was so much sun coming through the office’s massive windows. One of the pre-COVID office perks—an office with tons of natural light—was now a detriment to doing work in the post-COVID world, says Rachel Zsembery, Bergmeyer’s vice president. “Taking a Zoom call in an open office is really challenging without the right equipment,” she says. And those are just problems within a company’s control. Many firms have to rely on their landlords to make changes to elevators, ventilation systems, and cleaning processes (see “The COVID-19 ‘Elevator Pitch’”). And there is nothing companies can do about their workers’ commute, especially if it involves public transportation.

But the biggest issue out of corporate control may be schools. This spring’s sheltering-at-home scenario was tough on everyone, with working parents often having to juggle their assignments with keeping their kids occupied. They could be in for more of that if schools have to shut down again because of the virus. Many schools are staggering their schedules, meaning some kids physically go to classes on Mondays and Tuesdays while the rest go on Wednesdays and Thursdays. Even if that makes kids safer, it still creates a dilemma for parents—do they go to the office on the days their kids are learning at home?

Experts say there are many ways all this could shake out, and that it’s possible the right steps may reduce any employee revolt. That includes making some physical changes that emphasize health and safety, like removing desks and chairs to make social distancing easier. Hand sanitizer dispensers are being installed in office hallways and near main doorways. For an office cafeteria, Bergmeyer designed a placemat that diners turn over after finishing lunch to alert cleaning personnel to wipe the table down. 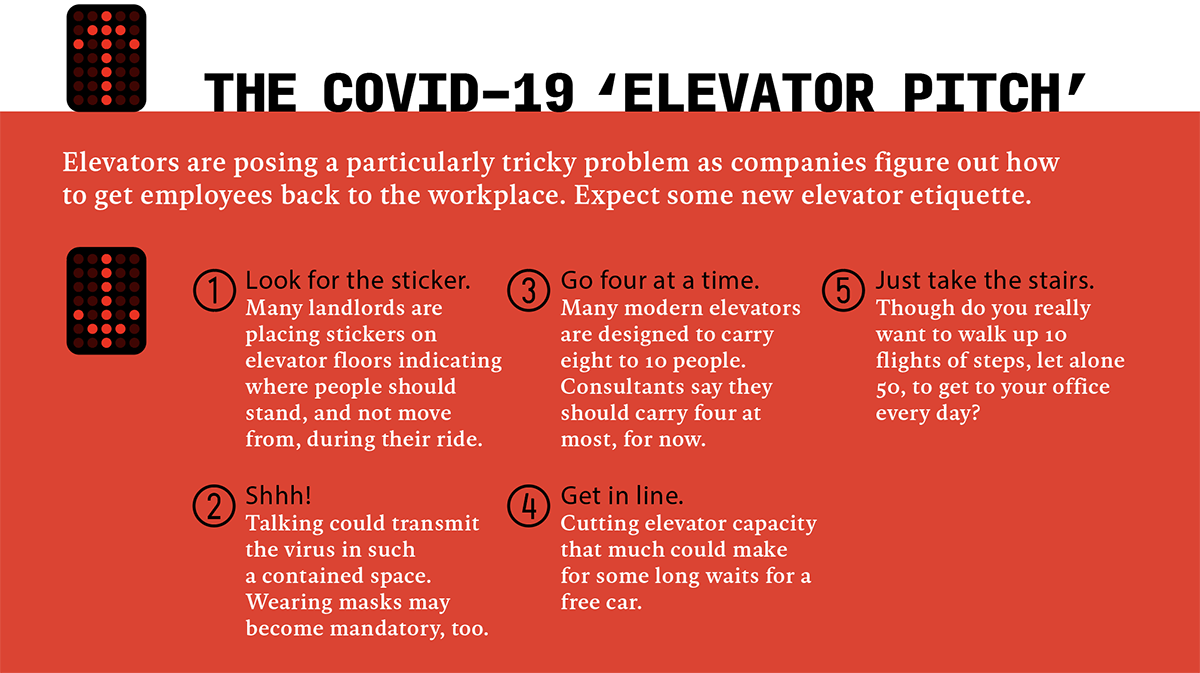 Staggered work schedules are also growing in popularity. Automotive companies, some of the first firms to bring people back, are using modified schedules to keep fewer workers on the floor and in shared spaces like cafeterias. The idea, experts say, can work for non-production-line employees too. One set of workers, preferably groups that work with one another routinely or on a specific project, comes in on Mondays, Wednesdays, and Fridays, while another set comes in on Tuesdays and Thursdays. Doing this may not only lower the risk of the virus spreading but also “reestablish the sense of community that the office life can create,” says Korn Ferry’s Royal.

Or, of course, many companies may change their minds and embrace working remotely. Google and Twitter are already keeping people home. And over the next two years, Fujitsu, the Japan-based technology firm, will shift 80,000 of its employees to remote work full-time, a move that it estimates will cut the amount of real estate it uses in Japan by 50 percent. The government of Barbados told its workers that they can work remotely for a year. Facebook has said workers can work from anywhere they want permanently, although it has reserved the right to change someone’s compensation based on the prevailing wages in the employee’s region.

Most important, according to experts, is to be transparent about any changes and consistently communicate them with employees. In practice, that means sending emails and memos updating people about what’s different in the office as well as noting what hasn’t changed. Experts say employers should back up these messages with signage in the workplace reminding people to keep social distance and other safety measures. But if there are still some employees who are fearful, give them some time. “You can’t control when someone is going to feel comfortable coming back,” says Zsembery at Bergmeyer.

As long as organizations decide to bring back employees before the pandemic ends, they’re going to have to convince a lot of skeptics like Laurie Wilkins. Wilkins works as an editor of Call Outdoors, a website devoted to fishing, camping, and all things outdoors. The website’s office in Cheyenne, Wyoming, closed back in March, and even as many businesses around town have started to reopen, Wilkins doesn’t want to let his guard down. He’s anxious going out to buy groceries and other necessities, so much so that he showers the moment he gets back to his home. He just doesn’t want to get anyone in his family sick.

He knows that things would run a bit smoother if he were working there again. Brainstorming and collaboration are still easier when everyone is together in the same room, he says, and working together creates a sense of collective accountability. “Nevertheless,” he says, “I think I won’t be returning at least until after a vaccine has been developed.”