By Pat Commins and Patricia Crisafulli

For two months, the volcano had been rumbling with earthquakes and small explosions, spewing steam and plumes of ash. Steve Malone, a geophysicist and research professor from the University of Washington, flew in with colleagues by helicopter to undertake the perilous task of adjusting seismometers on the side of an extremely active volcano. As they worked on the equipment, the ground shook so much that Malone and his colleagues squatted down at times and held on. “It felt like the mountain was going to kick us off,” he recalls.

That volcano was Mount St. Helens, which erupted on May 18, 1980—a mere two days after Malone and his colleagues had worked at the site.

Now, 41 years later, Malone reminds us about the Mount St. Helens disaster—one of the largest in recent memory. It began with a magnitude 5.1 earthquake that triggered a huge landslide—the largest avalanche of debris ever recorded. A violent blast of hot ash, rocks, and boulders blew down every tree within the area and seared those on the perimeter. The damage extended almost 20 miles. Fifty-seven people died, including some of Malone’s colleagues and friends, and hundreds of homes were destroyed. After the blast, the summit of the mountain was gone, more than 150 new lakes and ponds were formed, and rivers changed course. “It was basically worse than the worst-case scenario,” says Malone, who is now a professor emeritus but continues his passion in volcanology.

Out of that destruction, however, came a new era in volcano monitoring—essentially gathering as much data as possible to try to forecast the unpredictable amid vast uncertainties and unknowns. All of which is not that unusual for business leaders. The more you talk to leading scientists and researchers in volcanology, the more parallels you can draw to today’s business landscape—particularly the seismic impact of the COVID-19 pandemic on organizations around the world. Indeed, one crucial parallel emerges: the fact that the latest science, the best observations, and voluminous data cannot eliminate uncertainties. For scientists and business leaders alike, there is only proceeding with caution and agility, by learning from the past and discerning patterns in the data to inform the future.

Unlike hurricanes, whose paths can be tracked, and blizzards, which can be predicted with some accuracy, volcano forecasting is not a precise science. “Forecasting implies that there are uncertainties and errors,” explains Heather Wright, a research geologist with the United States Geological Service (USGS). That’s why volcano scientists do not use the word “prediction.” As Wright tell us, “Predictions imply certainty about what’s to come, but natural processes are inherently uncertain.”

Despite the constant uncertainties, improving forecasts remains mission-critical for volcanologists. They need to generate more accurate projections to produce timely warnings and save lives. “You need to communicate what the hazards may be and communicate the uncertainties as well. That’s a big issue in the volcanic world,” says Josef Dufek, a professor of volcanology at the University of Oregon.

Of course, a similar balancing act of warnings and uncertainties has played out during the COVID-19 crisis—country to country, and state to state in the US. Throughout 2020 and into 2021, leaders have been dealing with peaks and ebbs in the pandemic, which has made forecasting their own business climate difficult. The only way forward is to examine the possibilities—and volcano science may help show the way.

Eruptions such as those at Mount St. Helens in 1980, Pinatubo in the Philippines in 1991, and Hawaii’s Kilauea in 2018 and 2020 may appear to be sporadic, infrequent events. But the fact is, volcanic eruptions average about 50 to 60 a year, often occurring in remote areas of the planet.

The challenge with volcanoes is that so much happens below the surface, unseen and unobservable. Complicating matters, volcanoes don’t all behave in the same way—not even those in the same region. To understand these destructive yet spectacular forces of nature, scientists travel the world to study active volcanoes, measuring everything from gas and ash emissions to the viscosity of lava flows. They also undertake forensic work, digging holes and sampling rocks and other deposits left by previous eruptions.

The more scientists observe, the more accurately they can find patterns to help forecast what could happen in the future. “The way we think about volcanoes is that the past is the key to the present and even the future,” says Ben Andrews, a geologist and associate curator of rocks and ores for the Smithsonian Institution.

A Day in the Field

For Andrews, a typical day in the field means hiking to a remote area to examine volcanic deposits from eruptions that occurred in the past, whether 20 years ago or 20,000 years ago. A site might be a river cut, where flowing water has eroded volcanic rock, exposing a cross section that serves as a visual timeline—with the most recent layers on top and the older ones on the bottom.

Examining such rock formations or other deposits yields clues to what happened at that spot, but only at that spot. “That may not be the same as what happened a mile away—or 10 miles away or maybe even 100 yards away,” says Andrews. Only by observing many different locations around the volcano can scientists begin to reconstruct how eruptions occurred. For Wright of the USGS, field studies are also at the heart of her work as a leading expert in eruption forecasting and crisis response. By studying geological history, she and other scientists search for the keys to improve their understanding of when a threat is escalating.

Scientists can then turn their observations in the field into small-scale simulations and models to help them re-create and observe specific scenarios. “So if we have an eruption of this magnitude and with these physical properties, what would the likely outcome be?” Dufek says. This kind of visual examination isn’t what business leaders do, of course, but they can certainly study the past to inform themselves about current and future risks. Organizations can see how they responded to the financial crisis of 2008–2009, or to disruptive technology or the emergence of new competitors. Knowing what happened in the past—especially which strategies worked or failed—can shape more effective responses. For volcanologists and business leaders alike, it’s all about connecting the dots of the past into projections of the future. 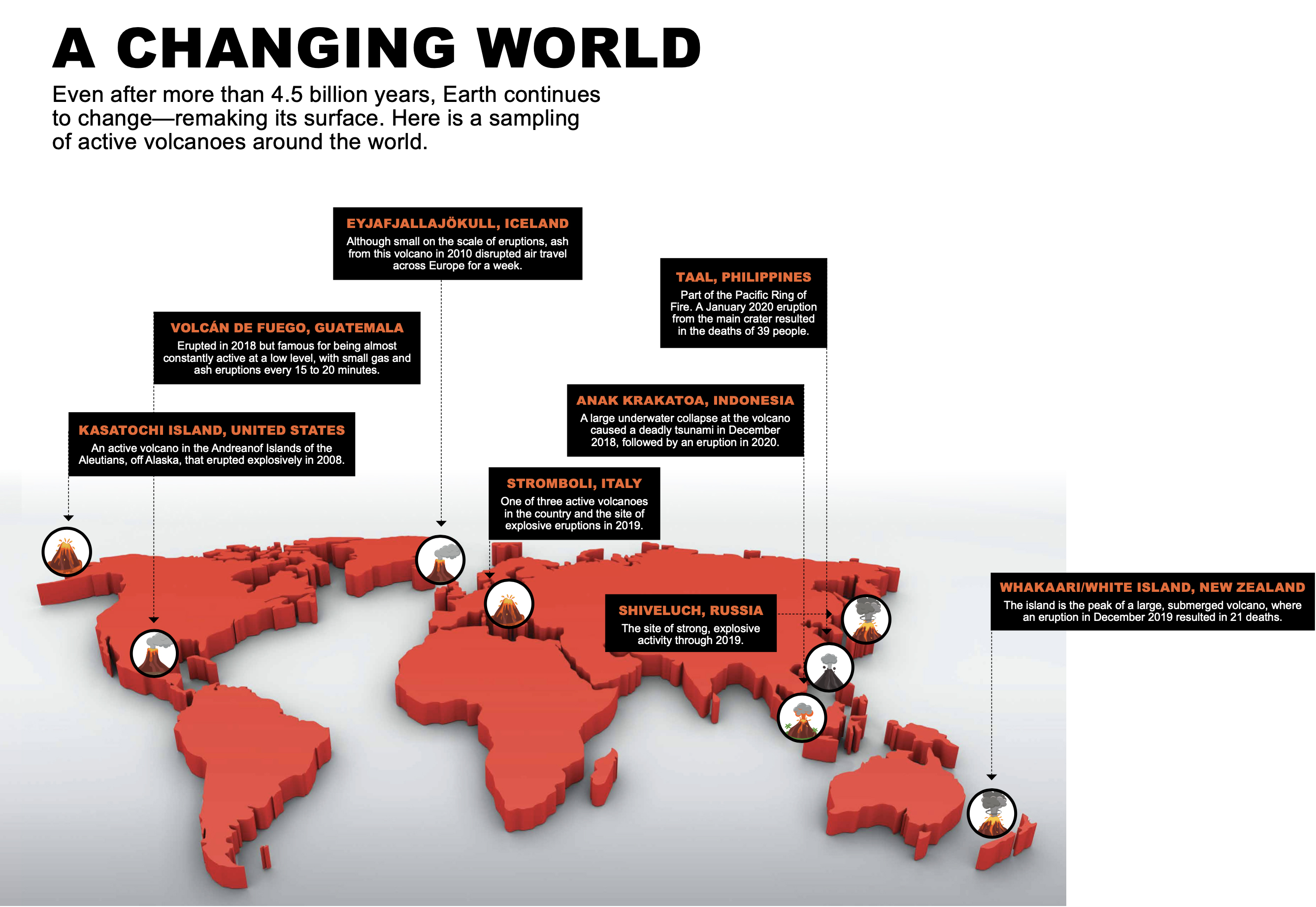 The “Internet of Wild Things”

Volcano science, like any technology-intensive study, is undergoing significant advances, from gathering big data to using computer clusters for massive computations. To give an example, Dufek describes a network of sensors installed in active volcanic regions to detect gas and particle emissions, as well as sensors that identify lightning that often occurs in conjunction with explosive eruptions, often in very remote places.

As Dufek explains how the sensor network functions, we are reminded of the internet of things (IoT) that’s helping drive data science in the business world. “That’s exactly right,” Dufek tells us. “I have a colleague, Doug Toomey, at the university, who calls [the volcano sensors] ‘an internet of wild things.’?”

The takeaway for business leaders is clear: the importance of gathering data across an enterprise—such as deploying IoT along the supply chain. The purpose is to amass feedback and detect changes as they occur. Just like the scientist looking for an increase in activity in a volcano, the business leader is searching for new trends or threats as they emerge.

Volcanologists come from a wide variety of scientific backgrounds: chemistry, physics, geology, and specialties from fluid dynamics to engineering—a melting pot of academic backgrounds. Business leaders who want an example of the benefits of increased collaboration need look no further than the unlikely pairings of colleagues in volcanology, where a geologist studying ancient rocks might be working closely with an expert in satellite imaging. A cross-disciplinary approach yields a greater understanding of the dynamics at work within volcanoes. As Wright of the USGS puts it, “Behavioral decision-making is a complex process.”

One of the unwanted influences in decision-making is the “loudest voice in the room,” the scientist who voices predictions so strongly that others second-guess their own assumptions. One solution, Wright says, is to separate the roles of scientists who are gathering and analyzing data and the ultimate decision-maker who determines the current risks of a volcanic eruption and whether to evacuate. “That’s good for making sure that the natural human biases of scientists, especially their unease with risk and their concern for people’s safety, doesn’t enter into their assessment,” she says.

In the same way, business leaders need to ensure that information and feedback flow continually across their organizations. By seeking input from those on the front lines, leaders can make decisions based on the broadest perspective—and not just the loudest voice. Still, even with great input and robust data, uncertainties will always remain, in both volcanoes and business. Indeed, living with ambiguity is unavoidable. For her part, Wright says she remains suspicious of attempts to provide yes/no answers: “That’s just not the way nature works.”