In sports, wellness joins the team

From NCAA football to the NBA, college and pro sports teams are waking up to the value of wellness programs. Our peek into their playbooks.

For the New York Jets, the trend is visible in the pro football team’s locker room, where players listen on headphones to mindfulness exercises designed to boost mental energy.

In the NBA, team doctors for the reigning champions, the Golden State Warriors, are busy creating sleep playbooks to neutralize the effects of so much travel across time zones. And then there are Major League Baseball's Toronto Blue Jays—right after the season ends, players will be given special exercises that focus on strength, nutrition, and mental focus.

Across all sports, from colleges to the pros, from baseball diamonds to football gridirons, preparing athletes for grueling seasons has moved to a whole new level. The hot trend today is for teams to create “wellness programs,” and by that we mean an entirely holistic approach that relies on specialist teams to design programs that enhance player nutrition, sleep, long-term health, and even mental health and mindfulness. It starts at the beginning of the season and continues well past the off-season; in fact, its never stops. “Wellness isn’t seasonal, cyclical, or isolated,” says Mark Shapiro, the Blue Jays’ president and CEO.

Though some treat the details of wellness plans as team secrets, MLB teams alone have dozens of professionals, from doctors to nutritionists to psychologists, behind them. And entire leagues are getting involved, as well; in one recent example of the trend, the NBA announced this year that it would fund an independently run mental wellness program to help players deal with everything from panic attacks to depression. 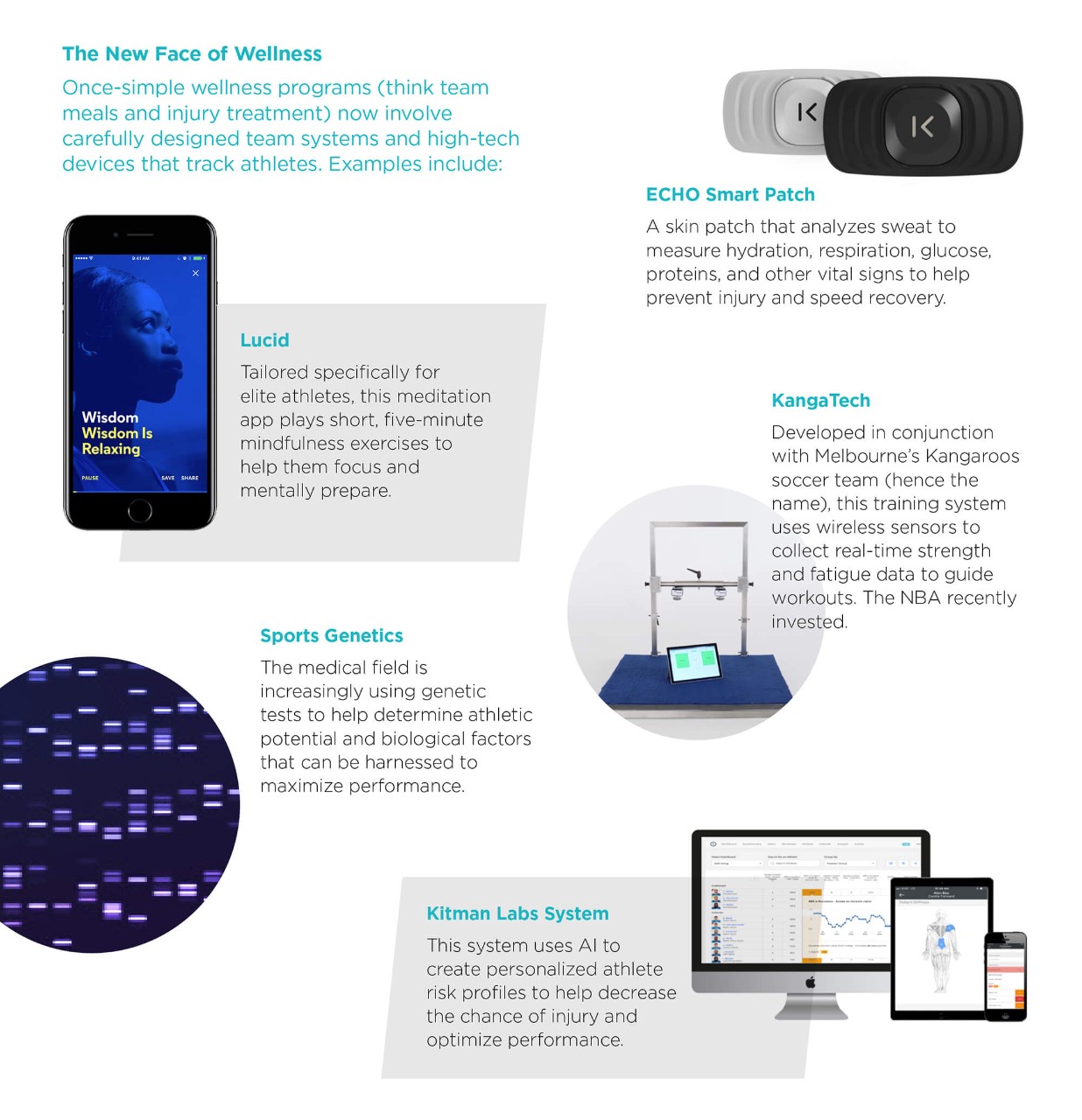 But if you think general managers or college athletic directors struggle with trades or recruitment, the idea of setting up properly integrated and well-run wellness plans is no easy pass into the end zone. As with all things in the world of sports, ramping up wellness programs at this level comes with a string of complexities: Who should be responsible for the programs: the leagues or individual teams? What does a wellness staff look like? Who leads it? How is success measured? For the moment, with little precedent around, there are no rules or uniformity for any of this.

And then, of course, there are the talent questions: According to Kyle Bowlsby, senior associate with Korn Ferry’s Sports practice, it isn’t entirely clear if a sports background is needed or not. “What we are seeing in the wellness space is a variety of backgrounds being utilized,” he says. And yet, for the future health of these athletes—with multimillion-dollar contracts in the balance—the clock on developing the talent and design of this budding new field is clearly ticking.

Historically, wellness in sports consisted of strength and conditioning trainers and a team doctor. Athletes worked out, practiced, and played, and if they got injured they got medical treatment. That was pretty much the model for decades until technology and data analytics slowly started to infiltrate sports, focusing training on the tracking of heart rates, fatigue levels, and other biometric indicators to improve performance and, more importantly, decrease the chance of injury or speed recovery in the event of one. Think of Ivan Drago’s training regimen in Rocky IV, minus the steroid use.

In recent years, however, performance training has expanded to include sleep, stress, mental health, nutrition, and other factors under a broader definition of wellness. Athletes themselves are partly responsible for driving this change, particularly as it relates to mental health with such stars as the NBA’s Kevin Love or Olympian swimmer Michael Phelps using social media and other platforms to act as change agents for this. As part of its new mental health initiative, the NBA hired Keyon Dooling, a sexual abuse survivor who suffered a mental breakdown while playing in the league, as a player wellness counselor; he gives talks to teams and players about dealing with emotional issues. “Athletes are expected to be perfect and not show any weaknesses, and for the longest time no one spoke up,” says Bowlsby. “But now they are finding strength in talking about their experiences.”

Teams are getting behind this, too, as their financial values soar; according to Forbes, more than 100 sports franchises globally are now worth more than $1 billion. Since much of that worth is due to, and invested in, players—contracts aren’t getting cheaper—building out sports science and wellness capabilities is both a business imperative and key recruitment and retention tool.

“It’s a bigger business now, and the consequences of not having your best players on the field are larger,” says Jed Hughes, vice chairman and global head of Korn Ferry's Sports practice.

To update his team’s wellness program, the Blue Jays’ Shapiro says he borrowed liberally from some European soccer models when he joined the Blue Jays in 2016; there, clubs and Olympic training centers have been employing wellness for years. But he adapted it to the needs of his new club, creating a jolt of innovation to a team that had operated more similarly to the corporate world. That came in the form of not only a new general manager and director of player development, but a new “High Performance” unit led by a British-trained doctor with no prior baseball experience.

The doctor, Angus Mugford, was given an assistant GM-level ranking, overseeing the areas of strength and conditioning, medical, sports science, and mental skills. His mandate: to link health and wellness to every aspect of the Blue Jays’ organization, from scouting and player development to road game meal planning and injury recovery treatment. One indicator of the enormity of the task is there are 36 professionals listed as members of Dr. Mugford’s High Performance team on the Blue Jays website, with titles such as fueling coordinator, Major League chef, and head of mental performance.

“Linking all these areas together, and then linking them to the larger organization, is how we can keep players healthier longer,” says Shapiro, who likens the model to retail’s “consumer at the core” mantra but for athletes.

For competitive reasons, the Blue Jays won’t provide too many details on the effort, yet Shapiro says he wanted someone with a background in the European model but new to professional baseball. “As a leader, he had the emotional intelligence and temperament to deal with the cultural challenges introducing new things to baseball presents,” Shapiro says. “He puts the player at the center as opposed to the organization just providing resources for them.”

It’s a bigger business now, and the consequences of not having your best players on the field are larger.

According to Korn Ferry’s Bowlsby, that kind of emotional intelligence is just one of several common themes that the wide range of experts coming into the wellness space have. He says these include innovation mindset around technology and training, strong leadership skills, and a holistic approach to organizational development. At the same time, as Hughes points out, teams need to overcome the challenge of aligning goals—which can be as much an issue on the college level as in the pros.

At West Point, for example, tradition requires cadets to eat together, which means trainers and coaches for the academy’s 1,000 cadet-athletes across 30 sports struggle over nutrition. Long-standing as it was, the tradition put many of its teams at a competitive disadvantage. “We don’t see our athletes until 3 p.m.,” says West Point athletic director Boo Corrigan. “By the time they arrive for practice, we have no idea what they’ve eaten or what nutrition they received.”

His answer? He enlisted an outside group that works with the military special forces to install nutrition centers in weight and team rooms, and convinced the academy’s leadership to give his strength staff control over the ordering and delivery of supplements to athletes.

United States Air Force special operations training is similarly rigid in its routines. So when Col. Ron Stenger, a 27-year veteran, was asked to completely revamp the assessment, selection, and training of the program, it was a figurative shock to the system. He made his case with data that showed 86% of airmen dropped out before finishing the initial special ops training course. Data also showed that tech skills and equipment prowess peaked at precisely the same time special operators began to break down physically. “That’s not a great business model,” he says. It’s also similar to what happens with professional athletes—their mastery of the technical aspects of the game often coincides with a physical decline.

Stenger and his staff changed all that by employing strengthening and meal plans that are similar to what pro teams do—and trying a whole new level of sophisticated wearable technology that monitors g-forces, heart rate variability, and central nervous system fatigue. With such equipment, staff can better tell when the trainees, for example, are reaching their breaking point on long runs. He also created a first-of-its-kind “Human Performance Support Group,” basically the Department of Defense’s version of the Blue Jays’ High Performance unit.

The results were impressive: Within a year, the dropout range for new airmen in the initial special ops training course dropped by half. “The military does a good job of taking care of its tanks and ships, but its most important asset is its people, and they need to be maintained just like fighter jets,” says Stenger. “Rather than wearing them down further, let’s change the training program.”