LOS ANGELES, April 17, 2019 — A new Korn Ferry (NYSE:KFY) analysis of the top 1,000 U.S. companies by revenue finds the percentage of women in key C-suite positions has risen slightly in the last year, but is still dramatically lower than that of their male counterparts. The study, conducted in early 2019, examines the percentage of women by title and by industry.

The analysis found that across the most prominent C-suite titles (CEO, CFO, CIO/CTO, CMO, CHRO) and several industries (consumer, energy, financial, healthcare, industrial, retail, technology and services) an average of one quarter (25 percent) of the top leaders are women. That is up slightly from a year ago, when 23 percent of leaders in the studied C-suite positions were women. While there were increases in the percentage of women in CFO, CIO/CTO and CMO roles, the percentage of women in the CEO and CHRO roles remained constant. 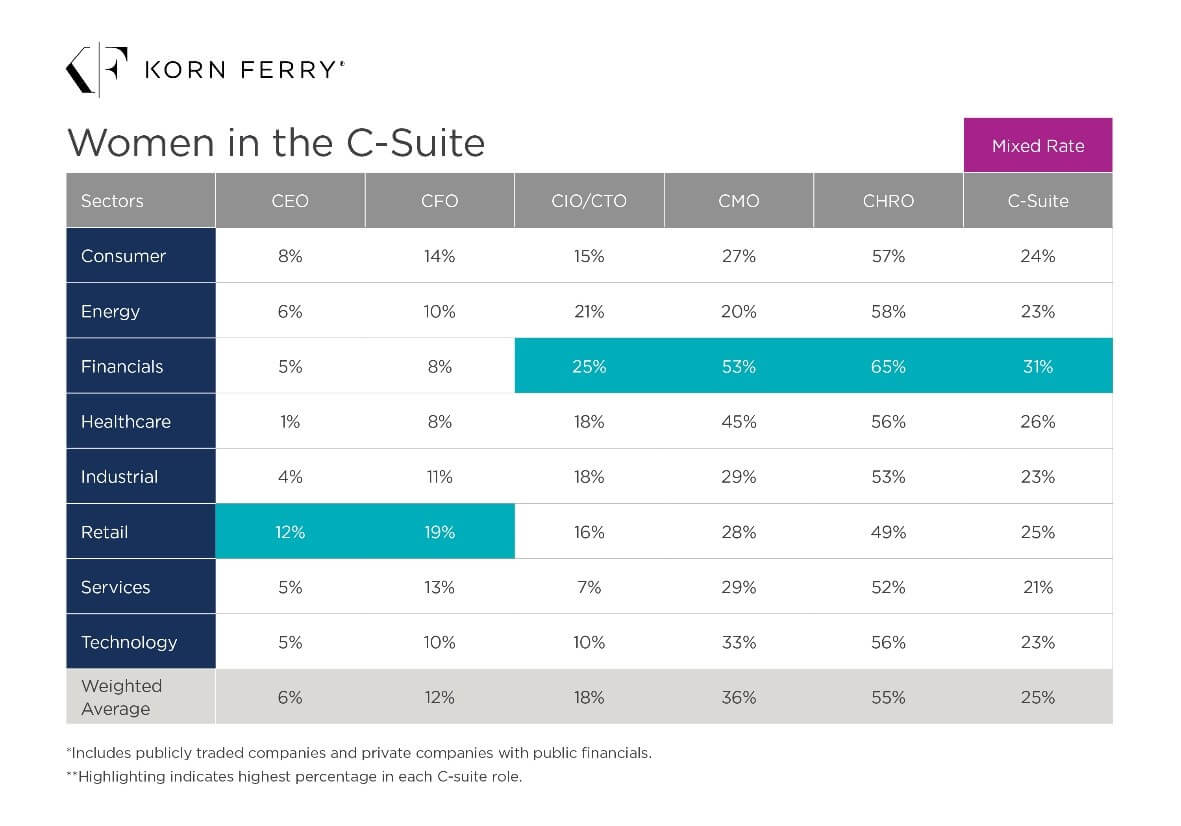 The study found that across all C-suite positions, the most senior post is held by the smallest percentage of women, with only 6 percent serving as CEO. This percentage is the same as last year.

The highest percentage of female CEOs is in the retail industry (12 percent), followed by the consumer industry (8 percent). The industry with the lowest percentage of women CEOs is healthcare at 1 percent. (This excludes some healthcare providers and hospital systems, which are often non-profit organizations that may not publicly disclose financial information).

“In a recent Korn Ferry study, we interviewed dozens of current and former female CEOs, and the majority of them said they hadn’t even considered vying for the top spot until they had a sponsor tell them they were well-suited for the role,” said Jane Stevenson, Global Leader of Korn Ferry’s CEO Succession Services. “It’s critical that both talented women and those around them focus on creating a clear path for advancement.”

Twelve percent of CFOs across industries are women, which is up from 11 percent last year. The industry with the most female CFOs is retail at 19 percent, followed by consumer at 14 percent. Those industries tied for having the fewest female CFOs are financial and healthcare at 8 percent.

“While the percentage of women CFOs is growing only slightly, we see some progress is being made,” said Bryan Proctor, Korn Ferry Global Financial Officer Practice Leader. “Increasingly companies consider diversity an absolute requirement when considering CFO succession options.”

“We are seeing a greater percentage of impressive and capable women who are choosing to grow their careers in the technology field,” said Craig Stephenson, Korn Ferry Managing Director, North America CIO/CTO Practice. “Our research indicates women CIOs/CTOs rank just as competitively as their male counterparts on key competencies, and we believe it is important to establish explicit and unbiased methodologies in how technology leaders are assessed by both competency and experience.”

The CMO role saw the biggest percentage increase of all C-suite roles, rising to 36 percent from last year’s 32 percent. The financial industry has the highest percentage of female CMOs at 53 percent (up from 45 percent last year) and energy has the lowest at 20 percent.

“To be successful leading the ongoing, customer driven transformation that is now part of most CMO’s mandate, marketing leaders need to excel at many leadership capabilities that female leaders often possess. These include inspiring across organizational silos, building and engaging teams and holding them accountable, and putting the customer at the center,” said Caren Fleit, Managing Director, Global Marketing Officers Practice. “So it stands to reason that the leadership capabilities that differentiate female CMOs would position them well to be successful in this pivotal role.”

The CHRO role is the only C-suite role where there is gender parity, with 55 percent of CHROs across industries being women, which is the same as last year. The industry with the largest percentage of women CHROs is financial (65 percent) and the industry with the lowest is retail at 49 percent.

“In recent years the CHRO role has been increasingly tied to business success as leaders understand that talent, when properly motivated and deployed, can be a significant lever for differentiation,” said Dan Kaplan, Korn Ferry Senior Client Partner in the CHRO Practice. “Woman CHROs bring several competencies to the table, including collaboration, agility, empathy and an ability to coach and influence that are critical to successfully optimizing the leadership of an organization.”

The Mix by Industry

When considering the percentage of C-suite women by industry, the financial sector comes in the highest at 31 percent, followed by the healthcare industry at 26 percent and retail at 25 percent. The consumer sector has 24 percent of women in the C-suite and 23 percent of C-suite members in the industrial, technology and energy industries are women. The services industry comes in last at 21 percent.

“In every industry we analyzed, there’s a tremendous need for improvement to bring more women to the C-suite,” said Stevenson. “This is a joint responsibility of the women to seek out experiences and development that can help them lead and succeed, and for organizations to create an environment where women feel empowered to progress in their careers at all levels.”

Korn Ferry is a global organizational consulting firm. We help clients synchronize strategy and talent to drive superior performance. We work with organizations to design their structures, roles, and responsibilities. We help them hire the right people to bring their strategy to life. And we advise them on how to reward, develop, and motivate their people.