Companies spent a record $3.5 trillion to buy other firms last year. Can they avoid the missteps that have riddled so many megadeals before?

There were $3.5 trillion worth of deals worldwide in 2018, a 12 percent jump from 2017, making it the third-largest year by value in history. Chipmakers bought rival chipmakers. Cable companies bought movie studios. Drug stores bought health insurers. And private equity groups bought firms in every industry. 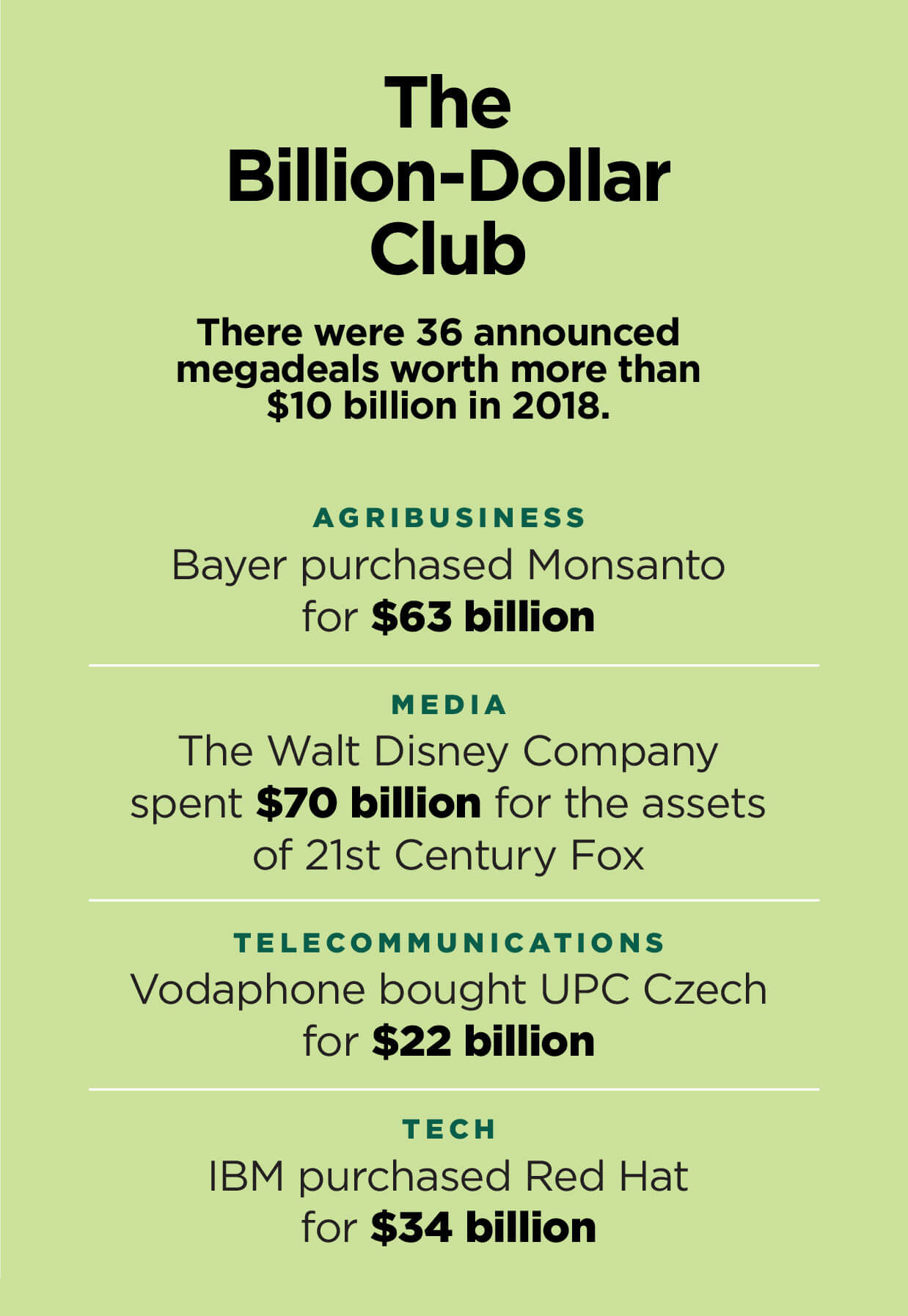 But now that the big-money announcements and deal closings are complete, leaders have to go about the much less glamorous but considerably more difficult task of making the mergers successful. How tough is it? Consider that most research shows 60 to 70 percent of mergers fail to meet expectations or fail outright. There will be a lot of focus on getting supply chains humming, making sure computers from former rival companies can work together, and managing other infrastructure issues that consultants often call “plumbing and wiring.” But experts say that any integration risks failure if it doesn’t take into account how to make employees more effective, appreciated, and engaged. “You can have a great strategy and integration plans, but if the employees don’t work well after the merger, it won’t matter,” says Alex Jakobson, a senior client partner at Korn Ferry who works in the firm’s Strategy Execution and Organizational Design practice.

Companies can start working on “architecture” issues, such as who reports to whom or what the jobs are, almost immediately, says L. Jay Bourgeois III, a professor at the University of Virginia’s Darden School of Business. Identifying reporting lines and job responsibilities will help create ownership and accountability for all employees.

Before the Italian cable manufacturer Prysmian actually finalized its $3 billion acquisition of General Cable last year, it figured out that it needed 300 senior leadership spots for the combined entity, says Fabrizio Rutschmann, Prysmian’s chief human resources officer. Importantly, Prysmian wanted to make sure that there was a healthy representation of General Cable executives who would take important decision-making roles. “The success of the post-merged firm depends on the vision of the new, combined leadership team to succeed. You need to engage with people of the other company,” Rutschmann says.

Most leaders recognize that any merger will bring up corporate issues, but they may not anticipate the extent of how a firm’s culture impacts the types of people it can attract and keep. Companies with a so-called “tight” culture have well-defined processes, performance standards, and hierarchies. On the other hand, “loose” cultures can have more self-management methods, and give individual employees a great deal of autonomy, says Michele Gelfand, a professor at the University of Maryland and author of Rule Makers, Rule Breakers: How Tight and Loose Cultures Wire Our World. “Employees who thrive in a tight culture may think a loose culture is just too forgiving of mistakes, while workers in a loose culture may think a tight-cultured firm stifles them,” she says.

Even a change in leadership style can sway talent. If employees at one company were motivated by a boss who constantly coached them, then they may be turned off by a new hands-off boss brought in after an acquisition.

Finally, leaders need to work on all the technology systems and processes that allow a company to do its day-to-day business. If a company is buying another to expand its geographical reach, the leaders had better make sure that the two firms’ supply chain systems can work with one another. But wiring goes beyond things such as computers. Firms also need systems to be able to find, hire, and retain the employees that they’ll need to execute their post-merger strategies, Jakobson says.

In Prysmian’s case, it wasn’t enough to figure out that the firm needed 300 senior leaders; it needed to determine the capabilities of those 300 leaders. It developed success profiles to determine the skills and traits needed. Then it created an interview process to determine the strengths of the leaders it already had. Prysmian now uses the system to find new recruits.