The Show Must Go On

Our guide to how concerts, sporting events, and conferences still manage to go on during the pandemic.

Broadway theaters are still dark. The Olympics are out for the first time in 75 years. And so on.… As the wait continues for vaccines on a widespread level, the world remains in the grip of a pandemic that has cut off the massive events that were once such a routine part of life.

But not all events. As everyone knows, professional sports leagues from Major League Baseball to the National Basketball Association found ways to hold games and televised championships. Comedy shows hit the fields—like Dave Chappelle’s invitation-only shows in Ohio. And large concerts have gone entirely online or adopted a drive-in approach, with fans attending from inside their own socially distanced vehicles. All of which has created new challenges for fans—accustomed to the old way—to score tickets. Here’s what to expect and what works.

What to expect: In May, America rocked its first concert in months as singer Travis McCready took the stage in Arkansas. Concertgoers were required to buy seats in small clusters, known as “fan pods,” for a group of six that would be comfortable in close proximity. Fan pods were distanced from one another, and all attendees underwent temperature checks and were required to wear face coverings. Drive-in concerts have also popped up around the country, with attendees watching from their cars, and there’s no shortage of virtual concerts online for those who prefer to stay safe at home.

Tips: If you venture out to a show with fan pods, consider buying out the entire pod of six but bringing just one or two guests, for added caution. If drive-in concerts are more your speed, think about parking in the back for extra distance from others and so that it’ll be easier to leave at the concert’s end. Still prefer to stay home? Check out a virtual concert, like the Trans-Siberian Orchestra’s recent livestream performance, which fans could access for a $30 fee.

What to expect: The MLB World Series games allowed fan attendance in small numbers, at just 25 percent capacity—but for indoor sports, it hasn’t been as easy. The NBA has gotten creative by allowing spectators to score great seats from the comfort of their homes. The league is utilizing Microsoft Teams’ new Together Mode to put fans on 17-foot-tall LED screens to appear like they’re in the stands. Even celebrities are getting in on this new trend. In June, former pro basketball player Chris Bosh sat in on a Lakers–Clippers game as a virtual fan.

Tips: If you’re looking to snag a virtual seat to a big game, check out individual team sites, like the Miami Heat or Phoenix Suns. There you’ll find a rundown of the steps you can take to score a virtual presence alongside your team.

What to expect: While business conferences aren’t exactly a place where folks go to kick back and unwind, they’re certainly one way to boost careers, which has only become more critical in these tough economic times. But for now, they are trickier to attend. True, in some countries where COVID transmission rates are low, conferences may be taking place. But in the United States, they’re being scheduled later into 2021. In the meantime, only one word applies to them: virtual.

Tips: To get some value from attending online, reach out to keynote speakers and attendees ahead of time to start building a relationship. Also, use the chat function to make your voice heard with insightful questions. Follow-up emails after the event can make a big impression as well, and don’t forget to report back to your company with all you’ve learned during the event.

Many folks are indeed traveling these days—without leaving their homes. Take a livestream walking tour of the Old Town district of Prague; observe jaguars, sloths, and monkeys in a Costa Rican working rescue center; or practice your empanada-making skills during an Argentinean cooking demonstration. A new product, Amazon Explore (amazon.com/explore), offers live virtual experiences with tour guides around the world. Tour prices vary, from around $20 for a virtual stroll through quaint boutiques in Ohio to $125 for an action-packed hour in Jerusalem’s Machane Yehuda Market. 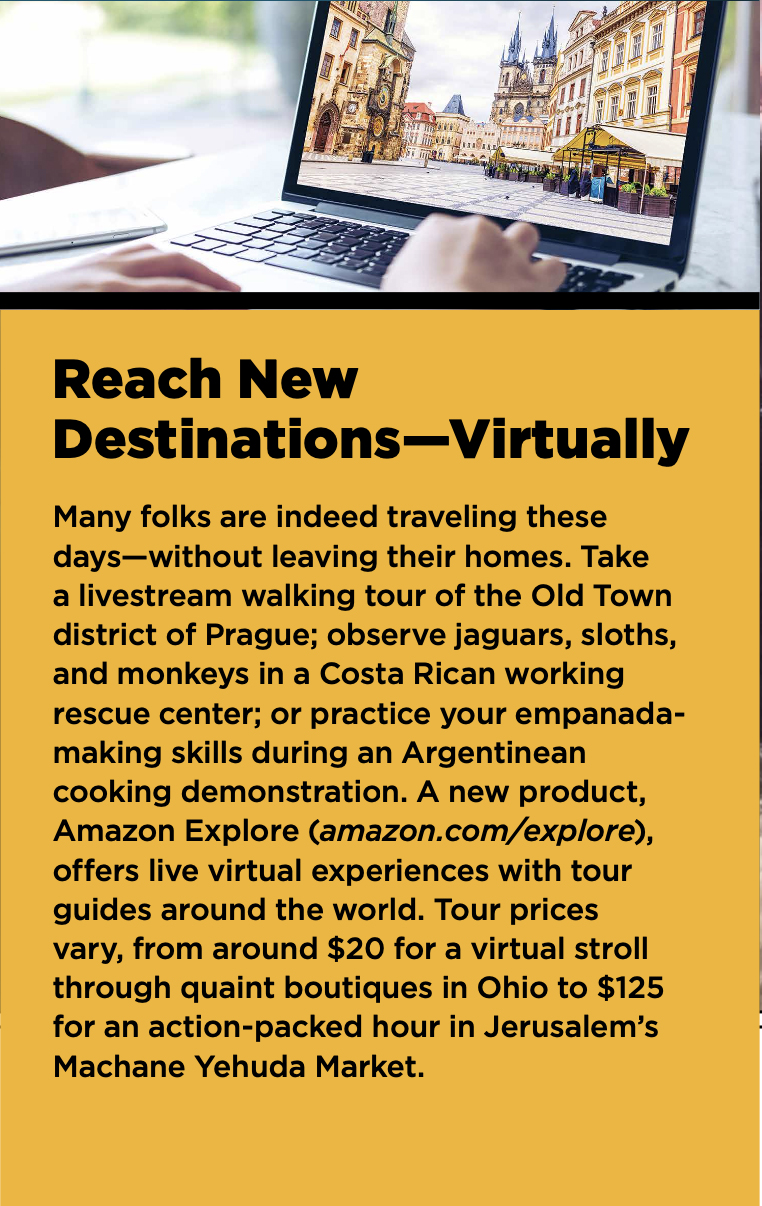