For all the good it will mean, firms know a COVID-19 vaccine may create many workplace issues. Are there any answers?

By all accounts, it’s just around the corner: the widespread rollout of vaccines that could end the pandemic of the young century. For many who have suffered from COVID-19 or know someone who has, the anticipation grows by the day.

But all the anticipation and advance knowledge in the world hasn’t helped a lot of large companies figure out the flip side of this scientific feat. While everyone wants to see the pandemic end, organizations find themselves smack in the middle of a perennial debate about whether to require workers who come to the office to take vaccines—or just urge them to do it. The liability issues, personnel problems, and workplace dilemmas are, in the opinion of many experts, mind-boggling. “Having a vaccine is a lot different than getting people vaccinated,” says Brian Bloom, vice president of global benefits at Korn Ferry and cochairman of the firm’s COVID-19 task force.

Historically, vaccines, whether for measles or the flu, have always faced some resistance. But a far more substantial portion of the population doesn’t want to take the new one, says Daniel Pasternack, a partner in the Phoenix office of law firm Squire Patton Boggs who specializes in labor and employment law. In fact, a recent Gallup poll found that more than 40 percent of people plan to skip it, citing concerns about the approval process and the drug’s safety.

All of which translates into a litany of issues for firms hoping to bring workers back into the office. Although new rulings are pending, the Equal Employment Opportunity Commission has generally recommended that organizations encourage, but not mandate, vaccinations. Either way, employees could mount legal challenges against taking the vaccine, on religious, medical, or ideological grounds. Conversely, in offices where the vaccine is optional, employees who get COVID could sue the firm—or even an unvaccinated colleague.

But it only gets more interesting from there. Suppose an employee whose organization mandates vaccines winds up traveling to see clients at a firm that doesn’t. That person could take action if they happen to contract COVID—against both their clients’ firm and their own. On the flip side, companies could sue employees who say they have received a vaccine but haven’t.

The sheer myriad of liabilities that organizations could face raises the kind of legal precedents courtrooms love to debate, from “duty of care” to “mutual aid and protection” to “reasonable accommodation.” The fact that regulations differ across states only compounds the possibilities. And while organizations mandating vaccines isn’t new—many healthcare organizations do it—experts are already suggesting that firms work out the nuances before rushing more people back in. “There’s no trophy for being the first company to reopen,” says Bloom.

The good news, of course, is that organizations still have months to sort out the details, based on the current timeline for the vaccine rollout. Some hope that a large chunk of the public will have come around to the idea of getting vaccinated by then. Indeed, the recent history of mass vaccinations suggests that despite initial hesitation, ultimately they will. Unlike swine-flu vaccinations rolled out under President Obama in 2009 and President Ford in 1976, where complications led to death and paralysis, so far the COVID-19 vaccines being used have shown a high level of efficacy—upwards of 90 percent.

Together, these data points may make it easier on organizations planning to require vaccinations. Still, experts advise companies to make it as easy and inexpensive as possible for employees, potentially by hiring an outside party to establish on-site clinics to administer the vaccine. Another method would be to offer it as part of an overall company-sponsored wellness program. Melissa Legault, an associate at Squire Patton Boggs, says that whatever steps they take, organizations at the very least should ask employees to sign waivers, whether they get a vaccination or not. “Documentation is so important,” she says. 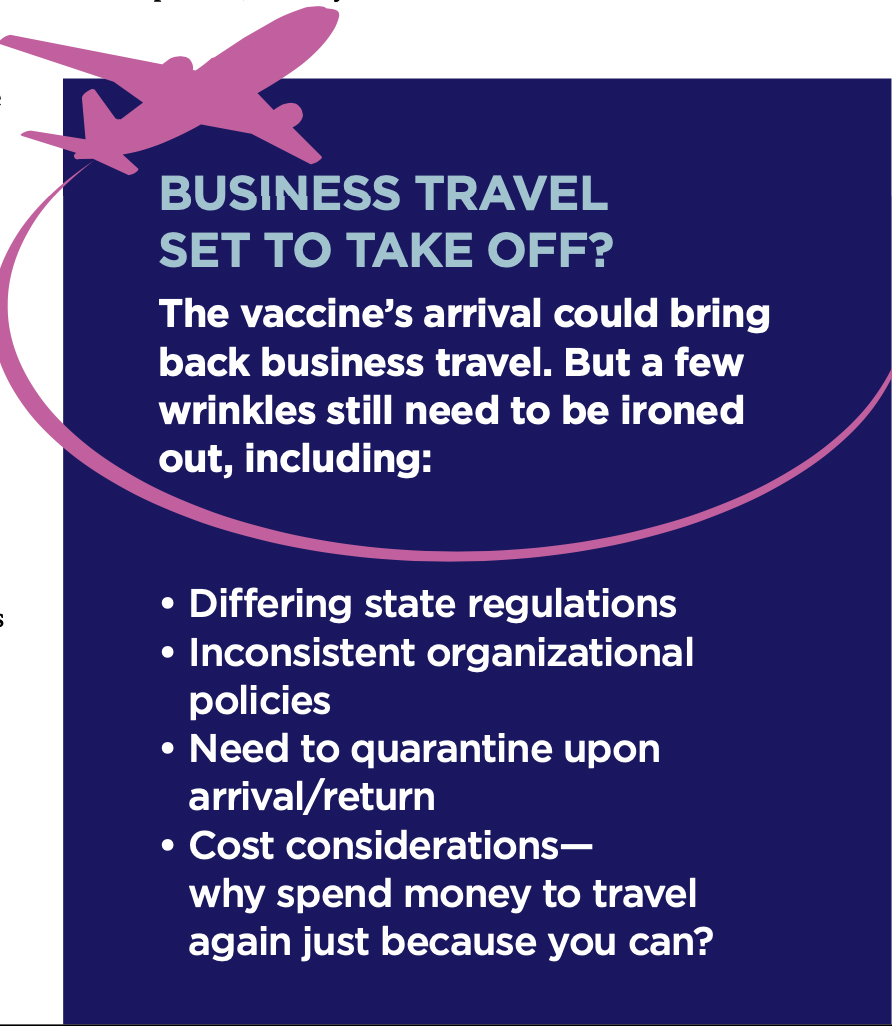