The Alluring and Secret World of Strategy Games

Andrew Cunningham, the founder of DailyPest, a pest-control service based in State College, Pennsylvania, often wears a pin on the lapel of his jacket. The accessory represents a 20-sided die and glints as a beacon to others in the know. When Cunningham showed up to an important business meeting several years ago to pitch his company’s services to a large real estate group, he was wearing the pin. A senior member of the board pointed it out. “For a split second, I thought it was a mistake to wear,” Cunningham says. As it turned out, the exec was a fellow gamer, and DailyPest now holds contracts to service eight shopping malls.

Polyhedral dice will be familiar to anyone who plays Dungeons & Dragons, one of a handful of enormously popular strategy games, which also include Catan and Pandemic. While the lockdown era of COVID boosted their mass appeal, top minds like comedian Stephen Colbert and writer Ta-Nehisi Coates were already longtime enthusiasts. Estimates say some 13.7 million escape the confines of reality through these adult pursuits in make-believe. “They’re mentally challenging,” says Bill Nara, director of the Chess and Strategy Game Association. “The conclusions aren’t predetermined, and there are many paths to success.”

For his part, Cunningham, 33, learned to play as a teenager. “What appeals to me about the game is part nostalgia—but also the strategic nature and creative outlet it offers,” he says. Still, he kept his interest in fantastical worlds on the DL early in his career, unsure whether it would diminish his credibility. Now, though, he prominently displays a D&D calendar in his office and plays with other heads of companies.

Cunningham isn’t the only one waving a flag. Catan, one of the best-selling games of all time, counts Facebook founder Mark Zuckerberg, LinkedIn founder Reid Hoffman, and Zynga CEO Mark Pincus among its aficionados. Indeed, the Washington Post called it “a necessary social skill among entrepreneurs and venture capitalists.” Hoffman and Pincus will play Catan—which involves deploying any means necessary to acquire material wealth, and therefore social capital—with potential hires to assess their ability to make quick decisions and manage resources.

“You’re able to take what you do from nine to five, where you’re thinking about the order of operations and how to set yourself up for success, and apply it in a playful way,” says Shelby Ring, chief executive of Ruby Riot Creatives, a destination wedding videography company in Charleston, South Carolina. Ring plays Catan with coworkers and vendors, saying, “It lets me see how they run their business, how their minds work, and how they troubleshoot.” 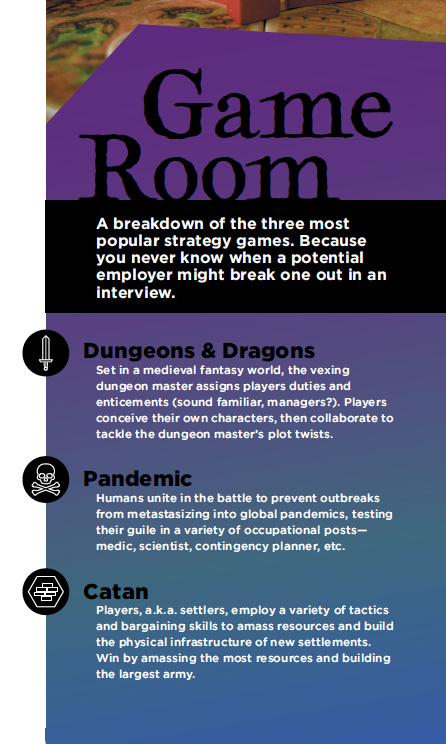 While interest in strategic board games has risen steadily over the last five years, it got an added boost as people searched for entertainment while sheltering in place, Nara says. Catan saw sales shoot up 144 percent in the first five months of 2020. Then, of course, there was the morbid allure of another ominously named strategy game. Pandemic, created in 2004 after the SARS epidemic, is premised on working together as a group to prevent viral outbreaks from proliferating into global pandemics. Pandemic and D&D, unlike Catan, are cooperative efforts, where failure or success happens as a team. The antagonist is what unfolds on the board, not the other players.

So why play a game of strategy when the vicissitudes of running a company provide plenty of plotting, networking, and dice rolling? Flynn Zaiger, chief executive of Online Optimism, a New Orleans digital marketing and design agency, says it’s because leadership doesn’t come with a rulebook. And sometimes, “when you’re an executive, you don’t necessarily know what the right step is to win. With a board game, there can often be a clear, satisfying path to victory,” he says.