The Wounds of COVID

He started out as a software professional, working with multinational companies. Then 13 years ago, Sreenivas Dasari pivoted to something entirely different, helping launch the 7 Food Court along a busy stretch of highway between the south Indian cities of Hyderabad and Vijayawada. The gleaming rest stop offers travelers a place to refuel with hearty local fare like dosas and idlis, while teenagers mill around sipping cold drinks from the Thick Shake Factory. This bustling food court is praised in online reviews for its immaculate cleanliness and has been recognized for its food quality by the Telangana state tourism bureau. Much like his burgeoning country, Dasari and his business were thriving. Then came COVID-19.

Through both the initial wave and the delta variant, Dasari has experienced a string of painful losses. First he faced the death of his aunt and his very close cousin, whom he reflexively calls his brother. While he was grieving their loss, the pandemic struck his business, afflicting 10 out of about 90 employees. During this stressful time, Dasari and his partners worked rapidly to help defray healthcare costs for their workers, even hiring a local doctor to care for them. As Dasari worried about his staff and the financial strain of temporarily closing the business, tragedy struck again: the food court’s on-site manager unit head died from COVID. “We lost another family member,” Dasari says of his longtime colleague. As for the employees who relied on and respected their boss, Dasari says they no longer have a sense of direction. “They lost their radar.”

Across the globe, COVID has been an unexpected and devastating blow, leaving country after country struggling to keep the populace safe while propping up some semblance of an economy. But perhaps nowhere has the scale of that combined assault been greater than in India, a nation with 1.3 billion people and the world’s sixth largest economy. It is here that the delta variant—which now plagues the rest of the world—struck first and hardest. At one point last spring, the country was recording roughly 400,000 cases per day and contributing half of the world’s total infections. (By the end of the summer, there were fewer than 40,000 daily cases.) Overflowing hospitals had no choice but to turn away sick patients, international media outlets shared footage of mass cremation sites, and desperate citizens appealed to Twitter for help finding oxygen tanks. By some estimates, India lost as many as 4 million people to the pandemic.

“These workers helped the factory grow, so it was our responsibility to do the same for them.”

In such an environment, where nearly everyone was fearful and grieving, virtually no business large or small was left unscathed. Yet amid the kind of trauma that may last for years, it was in the workplace, experts say, that Indians found ways to support each other—and in a fashion that would be unthinkable in most of the Western world. Companies developed new bereavement policies, expanded medical care and mental health services, and literally sheltered workers in need in their own offices and factories. In many cases, the help extended beyond, to families as well. “Companies stepped up more than anyone thought they would,” says Navnit Singh, Korn Ferry’s chairman and managing director for India. “It might have been the only way to get through it all.”

For his part, Dasari says he doesn’t yet have all the answers, but he did make one big commitment before his business partially reopened in June: the company will fully cover the education of his deceased colleague’s children. Says Dasari, “We know the value of a person.”

Prior to 2020, the Indian economy was on a very different trajectory. Following economic liberalization policies in the 1990s, the country achieved remarkable growth, pulling roughly 300 million citizens out of poverty. And while 80 to 90 percent of its workforce remains in the informal sector, India has nurtured a variety of thriving industries, including an IT sector that has been growing at 7.5 percent per year and is expected to reach 10 percent a year, according to one report. Despite India’s status as a developing country and its very real challenges, there was a sense of optimism about its future. After reaching $2 trillion in GDP five years ago, the government aspired to hit $5 trillion by 2030.

The coronavirus outbreak has clouded some of this rosy economic forecasting. In March 2020, Prime Minister Narendra Modi ordered one of the world’s swiftest and largest lockdowns in an effort to minimize contagion during the first wave, but it sent businesses reeling. The nation experienced its first recession in nearly 25 years; GDP contracted by 7 percent as approximately 200 million people saw their incomes drop to below the recommended need-based minimum wage of $5 per day.

As in many countries, sectors that could not shift to telework—including hospitality, travel, manufacturing, and construction—were particularly hard-hit. Although India has passed stimulus measures, including a $260 billion relief bill in May 2020, the process of accessing this support is often not straightforward. By comparison, the US has allocated nearly $4 trillion in relief spending, offering some industries, such as airlines, strong support that India could not.

Even sectors that could work remotely faced unique obstacles. Teleworkers everywhere had to balance childcare, employment, and the stress of the pandemic; but India is unique in that many families live in intergenerational homes, with a mix of parents, in-laws, siblings, and other relatives, limiting privacy. Employees who were used to spending most of their workweek at the office struggled to adjust to working in cramped quarters with multiple relatives. “Remote was hard,” recalls Singh. “You had enormous extended families jammed into tiny spaces.” It was in this environment that businesses struggled to find ways to forge on, to improvise, and in doing so, to develop new employer–employee relationships. 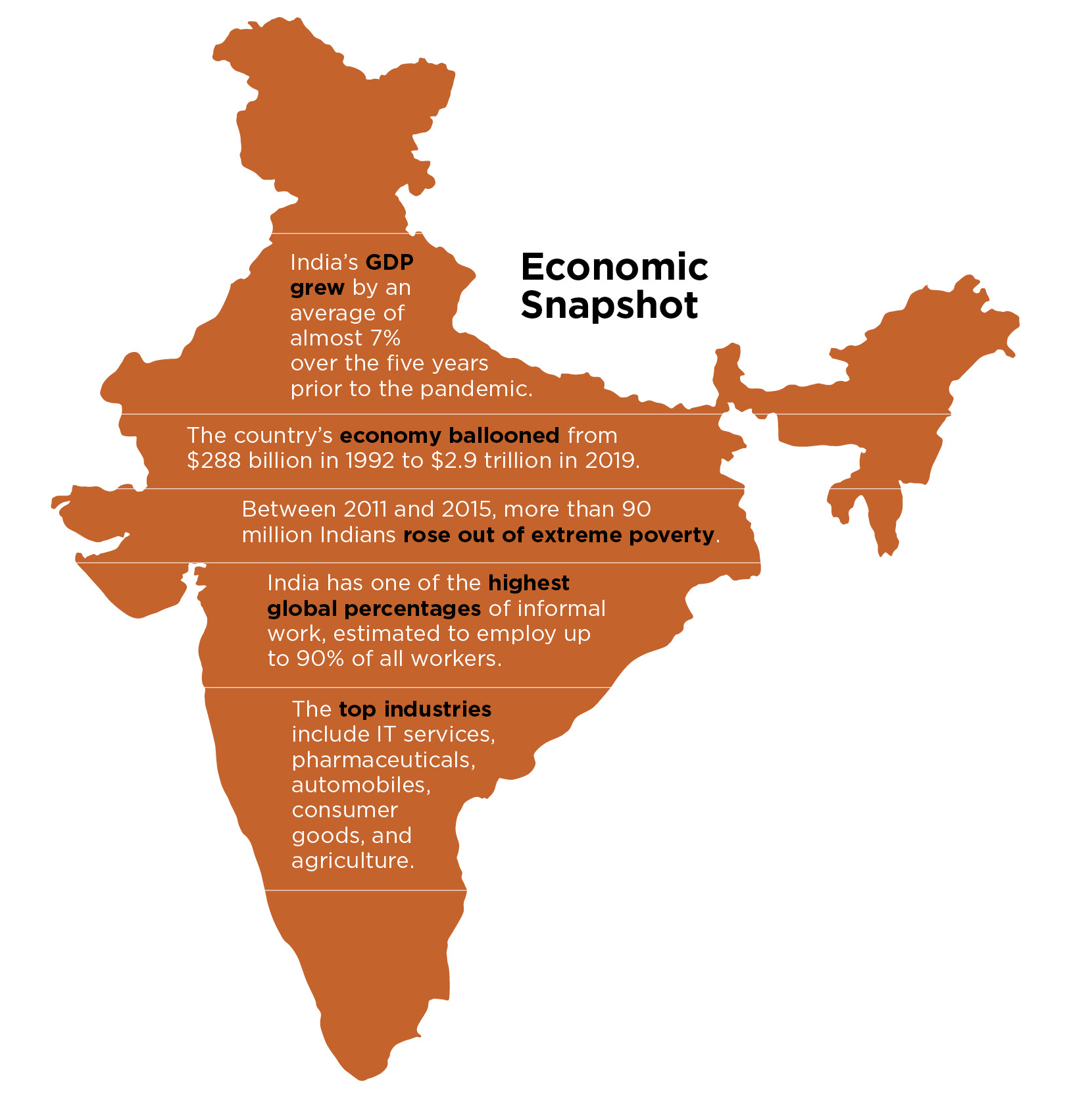 The small clothing factory is like many others in the industrial city of Ludhiana in northern India. Check out its website and you will find NG Apparels boasting about its clients, which include New Balance and Nordstrom, as well as its ethical approach to manufacturing. Pictures of smiling workers behind elaborate sewing machines suggest a modern, well-oiled facility—far, far removed from what it would become in the early days of the pandemic.

During the first wave of infections, thousands of laborers attempted to reach home by foot, sometimes traveling hundreds of miles and carrying COVID with them. The only way to prevent a mass exodus of employees, says NG Apparels representative Arpit Aryan Gupta, was to let them and their families live in the factory itself. There, setting up cots inside offices or spreading them across the floor, they would have free access to electricity, shelter, and water. (And birthday cake, when celebrating was warranted.) In all, Gupta estimates about 40 of the firm’s 75 workers and families were holed up there for three and a half months. “It is very difficult for factories to shell out money for months, and there was no government assistance,” he says. “But these workers helped the factory grow, so it was our responsibility to do the same for them.”

“You can’t expect them to restart with the same enthusiasm. It’s baby steps.”

This display of duty was not unusual, as firms went above and beyond to meet the moment. A small business specializing in agriculture fintech describes how, while trying to help the family of a deceased worker, they realized that the late employee’s wife had similar graphic-design skills. So they offered her employment. Small- and medium-size companies often made these kinds of situation-specific decisions, though they were less likely to be able to offer expensive medical care and mental health services. Many larger companies, however, ensured that their employees could contact counselors to discuss their challenges, even though employer-sponsored mental health support had not previously been a norm in India. Sushil Eapen, CEO of the employee assistance program Silver Oak Health, says his business alone has expanded 200 percent since the pandemic began. “COVID-19 opened up internal discussions about mental health, and I don’t think it’ll go away,” he says.

Multinational companies offered support that ranged from extended leave to zero-interest loans to wellness webinars. One human resources representative for a multinational data and insight company says her office made one-on-one calls to each employee to get a better sense of how they were coping. She became a deeper part of each person’s life as she learned about their struggles living with abusive spouses and frustrations about being quarantined with extended family. She offered them advice whenever she could, but also identified with some of the problems they were describing. As the workspace blended with the home, she says, “the biggest challenge is that work-life balance doesn’t exist anymore. I work 12 to 13 hours a day.” An employee at one large consulting firm echoes this point, saying that the workday has expanded. What once could be resolved with a quick office conversation now requires carefully coordinated virtual meetings.

In the end, HR representatives have been quick to point out that while their workplaces have tried to function as smoothly as possible, deadlines have become more flexible and managers have used their discretion to offer more leave and half-day options, depending on what each of their employees may be facing personally. Managers have also tried to be thoughtful when onboarding employees who have faced trauma, from losing family to recovering from COVID themselves. “You can’t expect them to restart with the same enthusiasm,” says one HR rep. “It’s baby steps.”