With massive mergers behind them, traditional media firms will battle to change culture and talent skills to keep up with all the media people watch today.

More than a decade ago, David Grant already had a feeling about how his own industry would soon transform. He had recently left his traditional Hollywood job as president of Fox Television Studios to become CEO of a start-up gaming media firm. Grant had predicted in a magazine interview that new content formats were coming, something entirely different than the standard TV shows and movies of the day. He called it “the next place you can do something interesting.”

Interesting indeed—that same year, the world would be introduced to YouTube, with an entirely new vision. “You could immediately see how short-form video, combined with easier access to it, could dramatically change how and who makes content,” says Grant, who is now the president of the video production arm of a widely popular different media company, called POPSUGAR, which reaches one out of every two millennial women in the United States every month.

But even back then, few people had a clue how this change would impact a rather significant player in media: the traditional studios. These are the giants that have relied on a straightforward model—creating television shows and movies and selling them to cable and satellite operators who retailed it to consumers. But, as the business shifts to a direct-to-consumer model, they now must make some make difficult trade-offs between old business models and new business opportunities. The disruption is so volatile that Rupert Murdoch, one of media’s most successful operators, got out of the business. On the flip side, Facebook, Amazon, Apple, Netflix, Google, and other tech giants are pouring billions of dollars into buying and developing live, reality, and scripted audio and video content for on-demand consumption.

“The bottom line is that the media world is not only about great content and distribution experiences.”

“The growth in streaming, coupled with the movement of eyeballs to social platforms, is creating a talent arms race among media, entertainment, telecommunications, technology, and any other company involved in the business of making and delivering content,” says Henry Topping, a Korn Ferry senior client partner who specializes in media, entertainment, and sports. “The competitive landscape is rapidly tilting in favor of organizations that can leverage data to develop new direct-to-consumer products.”

Topping says success in the future of digital media will hinge on organizations being able to engage and keep consumers on their platforms. For traditional media companies, that is no longer simply a creative decision. It is a complex equation involving programming, marketing, data and analytics, and distribution.

Netflix may grab headlines for all the money it spends on series like Stranger Things and Orange Is the New Black, but its main competitive advantage comes from building its business around a content-rich subscription direct-to-consumer model. It invests heavily in its product—the design, the interface, turning data into meaningful insights—all with the goal of making it as easy to watch as much Netflix programming as possible. And it has obviously been successful, with nearly 140 million streaming subscribers worldwide who watch one billion hours of its content.

But operating on that scale requires a mindset shift from looking for mass hits to collecting as much content as possible to serve a broad swath of consumer interests. “Whenever someone tells me we have too much content, it’s generally because they have not yet worked direct-to-consumer online,” says Robert Kyncl, YouTube’s chief business officer. “Working at scale is completely different than working at a bespoke network.” And Kyncl should know—more than 1.9 billion logged-in users visit YouTube monthly. They watch more than one billion hours of video daily and upload roughly 400 hours of new video every minute. By comparison, most of the big names in traditional firms, such as CBS and ESPN, have a far smaller audience of subscribers for streaming services.

Angiolet says that for new entrants and traditional companies, marketing and distribution talent will be critical to achieving the scale needed for these new offerings. He says a broader marketing skill set that includes knowing how to build customer relationships and apply key data analysis and product bundling is needed to manage the brass tacks of daily sales and subscriber turnover. Indeed, for any media company building up its business today that can seem monumental, considering how quickly people now sign up for one service with a hot show—and then drop it for another service with a different new series.

For their part, tech companies, unlike most traditional media firms, have built their culture and structure to deal with this rapid-fire model on a large scale, responding quickly to consumer demand. Another big plus: they have reams of data on what people are watching on their platforms, when, and for how long. Big traditional media companies, meanwhile, are left to make decisions about what content to produce through a combination of ratings, focus groups, and “gut feel.” “Our approach is data informed and very iterative,” says Kyncl. “Sometimes it leads to unconventional answers.”

To their credit, it isn’t as if big media hasn’t been trying to change—mostly through some impressively sized mergers. In the last two years alone, AT&T spent $80 billion to buy Time Warner while Disney picked up 21st Century Fox for $70 billion, among others. In its case, Disney plans to go head-to-head with Netflix by bundling Fox content with Pixar, Marvel, and other content into a new streaming service. AT&T’s Time Warner deal is driven more by the philosophy of vertical integration, with content creation, distribution, and platform converging to deliver an exclusive user experience.

Either way, the underlying motive in these deals is to get more informed about what is winning or not in the digital battle for eyeballs. “That’s what these deals are all about, and getting the talent and organizational design right for the newly combined assets is mission critical,” Topping says. 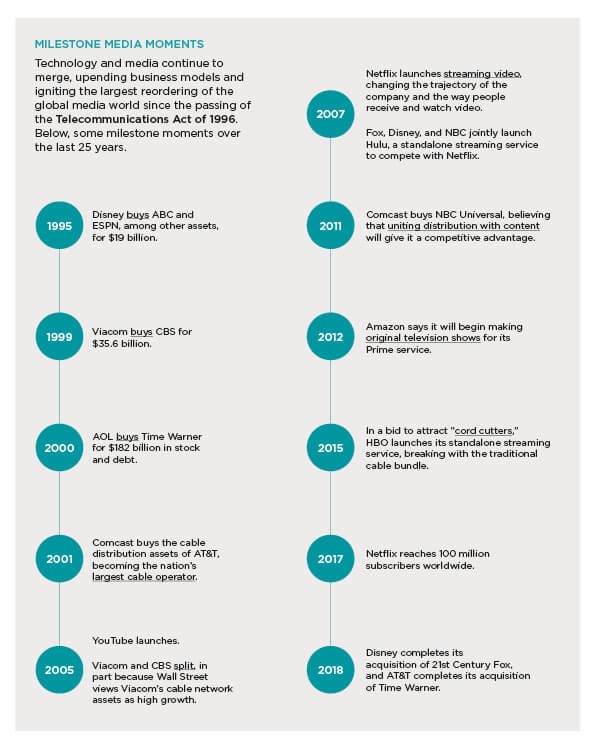 The problem is, the post-merger playbook for creating business value from deals centers on optimizing assets, growing margins, and increasing efficiency to drive revenue. Talent and culture often take a backseat, if they are even considered at all, even though those two elements ultimately determine the fate of most deals. “If talent in an increasingly digital-first world was an issue before a merger, it is even more so now, post-merger,” says Topping.

Simply merging or acquiring another company doesn’t necessarily equate to greater insight into customers, or better value across the supply chain. Achieving those results requires a methodical assessment and integration of talent to form a cohesive, collaborative, data-driven workforce. “The very difficult talent challenge is finding leaders who possess the left- and right-brain capabilities to work across the new business realities and the old core competencies to constantly check that execution and strategy are in balance,” says Verizon’s Angiolet, whose company spent more than $8 billion in recent years to acquire AOL and Yahoo to form the digital content unit Oath.

“The media world today is about how you bring the right content, on the right platform, at the right moment.”

Perhaps the only challenge more difficult than finding the right leaders post-merger is uniting the corporate cultures. Many media mergers have failed for this reason alone. The new firm tends to get caught up in fragmented strategies, siloed divisions, and old-guard decision making that is very top-down. Collaboration—critical in digital media—becomes undermined.

“The bottom line is that the media world is not only about great content and distribution experiences,” Topping says. “It is how you bring the right content, on the right platform, at the right moment. And your people are the ones who do it.”