As the private equity industry grows and competition for deals intensifies, firms are focusing on talent to drive returns.

It seemed like a tremendous opportunity. Private equity firm Frazier Healthcare Partners was seriously considering a carve-out of an international publicly traded company for its $800 million ninth fund. The price was in line with recent deals in the sector, and the growth projections looked promising.

But the firm’s view of the deal changed after its human capital team, led by Andy Caine, completed their work. In conducting due diligence on the company’s organizational and talent development needs, Caine informed the deal team that the costs associated with changing the organizational design, setting up new support functions, and recruiting additional talent, among other issues, would put the deal’s projected returns at risk. According to Caine, the “full multiple”—which includes not just the purchase price but also the subsequent investments required to achieve the deal’s projected returns— would sap resources and drain the upside. Because of the needed investments in talent, organizational infrastructure, and culture development, “we put in a less aggressive bid and the seller passed, which was probably the right outcome for us,” says Caine.

Private equity firms didn’t always evaluate talent this way. They focused instead on driving value through operational improvements. If they thought of human resources at all, it basically amounted to hiring a search firm to replace an executive or two at a portfolio company after acquisition.

Now, however, that view is starting to change. With more than 3,500 active private equity firms globally—an increase of nearly 150% since 2000—that combined have more than $3 trillion under management, the intense competition for deals is driving purchase prices higher. Increasingly high prices, coupled with rapid technological change, are eating into investment returns.

Focusing on talent retention and development is somewhat new territory for private equity firms, which have earned a reputation for acquiring companies and laying staff off en masse to cut costs. But as the industry grows and evolves, it’s critical to get the human capital part of the deal equation right.

“It used to be that firms did deals first and solved for their human capital needs only after the company missed a quarterly forecast or two,” says Caine. “But that’s like a football team hiring a new coach in the eighth game of a 16-game season and expecting to get to the playoffs. It is often too little, too late."

The total value of private equity deals globally increased to more than $550 billion in 2018, according to a joint report by law firm White & Case and financial-data company Mergermarket. That’s a 3% increase from 2017. In terms of deal value, the last five years have been stronger than any other period in the private equity industry’s history. Going back a little further, nine of the 10 largest private equity buyouts ever—excepting only the buyout of RJR Nabisco in 1988—occurred between 2006 and last year, all of them valued in excess of $20 billion.

“Not only are deal sizes getting bigger, so too are the companies being acquired,” says Kaplan. “That means that private equity firms have to get really good really fast at running talent development at scale."

While the number of private equity deals has fluctuated over the last decade, the dollar value has climbed almost steadily to historic highs. 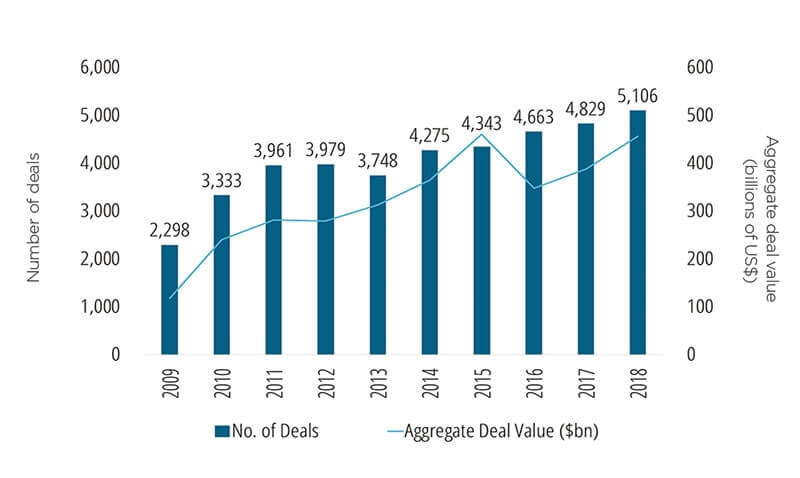 Case in point: the Blackstone Group, which has excelled in this regard. The Talent and Leadership practice within Blackstone’s portfolio operations team works closely across its operating companies on C-suite leadership assessment, coaching, and development, as well as senior- executive staffing, talent management, board development, due diligence, organizational design and transformation, and executive compensation. The goal, says Sharon Daley, an operating partner within the unit, is to develop a pipeline of talented workers who demonstrate “fit-for-purpose” expertise, the right sense of urgency, and the ability to lead change and operate in high-growth environments.

“Getting leadership at the company level to understand the growth journey we are on and commit to and get behind it can make a huge difference in how quickly we can realize returns,” says Daley.

She says that the single biggest topic her team works with portfolio companies on is talent availability, particularly recruiting and retention at all levels of the organization. Failure to address it proactively can be a significant growth inhibitor. Blackstone now leverages its data-science team to assist portfolio-company leaders in using a variety of digital tools to analyze local and global labor availability relative to skills needed, wage rates, education levels, and more. Recently, for instance, one company needed to recruit more software engineers and was deciding between two locations. A data analysis was able to find not only the number of similar jobs posted in each region and the average compensation but also the movement of candidates between competitors in each location and the average commuting time to each location.

“Our data allows us to have better conversations with our portfolio companies about talent decisions,” says Daley. She means that literally—during the last three quarterly conference calls that the Blackstone talent and leadership team had with the chief human resources officers of portfolio companies, members of the data-science team were invited to demonstrate new talent analysis tools for them to use. “These calls are a great forum to develop our CHRO network and exchange best practices, whether they are from Blackstone or one of the portfolio companies,” Daley says. “Seeing and testing new tools focused on talent has created a real pull from the operating companies and gives us a chance to impact their business model.”

“To continue to deliver compelling returns for our investors in this market, we need to put the right team with the right organizational infrastructure on the field within the first 90 days of close.”

Anne Arlinghaus—a director with KKR Capstone, which provides operational support to KKR’s deal teams and portfolio companies—says that as the private equity industry grows, success will depend in large part on how well firms connect talent across regions, industries, and teams. “Rather than each team developing its own network in silos, creating a centralized nervous system around talented operators we know across our whole firm provides more utility,” says Arlinghaus, who leads the development of cross-portfolio capabilities to drive talent acquisition and organizational effectiveness across KKR’s portfolio.

Part of the reason for the emphasis on connecting talent is sheer necessity—private equity firms and their portfolio companies are not exempt from the war for talent taking place across industries. The skill sets needed for success are also changing, with leadership in successful organizations today being less hierarchical and more collaborative and agile.

“Our data allows us to have better conversations with our portfolio companies about talent decisions.”

But an even bigger factor is that private equity firms are taking on the challenge of retraining and reskilling talent at portfolio companies that are undergoing digital transformation. To be sure, in many cases part of return-on-investment projections for acquisition targets are rooted in the ability to leverage digital technology to operate more efficiently.

“With many companies there is a talent gap that requires the repurposing of traditional skills to an adjacent area,” says Kaplan.

Talent, after all, is one of the biggest influences on a private equity firm’s performance, whether it’s the deal team evaluating an investment or the management team at a portfolio company. In many cases, firms aren’t just searching for a new CEO or executive team but also establishing a human resources function from scratch, including setting up performance management, benefits, and learning and development platforms, among other functions.

Four reasons for the focus on talent

Private equity firms haven’t historically been known as talent developers. But the changing dynamics of the industry are starting to affect how firms think about human capital. Here are a few reasons for the newfound focus on talent.

Private equity firms and their portfolio companies are not exempt from the war for talent taking place across industries.

Many portfolio companies are in the midst of a digital transition that requires talent to develop new skills.

Some private equity firms are building large, global companies that require running talent development at scale. Others are focused on midmarket activity. In either area, talent optimization is increasingly important.

The bigger the deal, the bigger the risk. Miscalculating the talent development costs and benefits could alter a deal’s investment thesis.

This bottom-up approach, which is a reversal from private equity’s historical mode, is particularly significant given the rise in secondary buyouts over the last decade. In 2010, secondary buyouts—when one private equity firm sells a company or investment to another private equity firm as opposed to a strategic buyer or the public—represented 36% of all exits and were the source of 14% of all buyouts, according to PitchBook Data. (An exit is the sale of a minority stake in a company, while a buyout is the sale of a controlling stake.) Last year, those figures increased to 48% and 18%, respectively. A number of factors are driving the increase in secondary buyouts, among them the rise in capital held by private equity firms, the smaller number of companies going public, and the fact that many potential acquisition targets are already backed by private equity money because of the growth in funds.

The more times a company is flipped from one private equity firm to another, however, the harder it becomes to grow and add value. Since private equity firms are adept at cutting costs and finding operational efficiencies, by the time a company gets flipped there likely isn’t much more the new owner can wring from it.

That’s a big part of the reason for the newfound focus on talent. Private equity firms are realizing that talent is the competitive differentiator that can lead them to bigger returns in a shorter time.

Or, to use another sports analogy from Frazier Healthcare’s Caine: “To continue to deliver compelling returns for our investors in this market, we need to put the right team with the right organizational infrastructure on the field within the first 90 days of close. If you do not start that process when you submit your [letter of intent], you are already behind.”