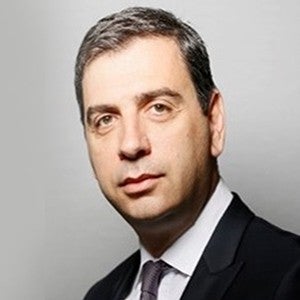 Panagiotis Floros is a Senior Client Partner for Korn Ferry, based in the firm’s Dubai office and leads the financial service sector in the Middle East.

He led the review and redesign of operating models and organisational structures for various financial institutions.

Mr. Floros directed a process and manpower analysis project for a leading bank in KSA. He also directed role clarity, job evaluation and grading design projects for financial institutions in Greece, Turkey and  the  Middle East.

He designed performance management systems for financial institutions, linking these with appropriate reward and development systems.

Mr. Floros is heading the Financial Services Sector for Korn Ferry Middle East. He has extensive experience in the areas of strategy, organisational effectiveness, role clarity, reward and performance management .

In his 16 years with Korn Ferry he has also held the positions of General Manager KSA, Head of BEO Middle East and Head of BEO and Rewards for the Athens office

Mr. Floros has also worked for National Bank of Greece S.A. as a management consultant, Ernst & Young Greece as a manager and Arthur Andersen Greece, as a consultant

He speaks Greek as his native language and English and French fluently.