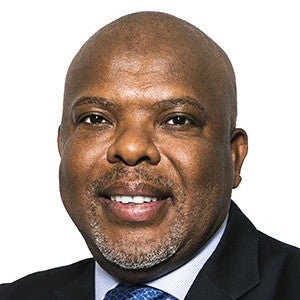 Thabiso Legoete is the Managing Director for Korn Ferry Sub- Saharan Africa based in Johannesburg.

Mr Legoete joined the firm from one of the four big banks in South Africa where he held senior roles spanning change, human resources, operations and strategy over a 12-year period with the bank.

In his last role as Managing Executive: Transformation & Change, he led large-scale change programs across the Retail & Business Bank. In previous roles within the human resources space, he advised and supported the Chief Executives of the business clusters on a myriad of human capital topics including building the top team, top team alignment, cultural transformation and post-merger integration. He was a member of the various business cluster Executive Committees in his last eight years with the bank.

Prior to joining the bank, Mr Legoete spent two and half years at the Johannesburg office of a leading management consulting firm, where he was a Senior Associate and served clients from both the private and public sectors across a number of disciplines.

He previously held a senior regional executive role at a listed insurance broker. He transitioned into the financial services sector with roles in the world leading underwriter at the time initially as a risk engineer, and later a key account executive.

Mr Legoete started his career, which now spans 24 years, as an engineer with a respected and listed South African gas company where he held a variety of technical engineering roles during his tenure.

Thabiso holds an undergraduate Mechanical Engineering degree and an MBA (with Distinction) from the University of the Witwatersrand. He also completed a post-graduate non-degree management program in Germany with the Carl Duisberg Gesellschaft and the Advanced Management Program (AMP) from INSEAD.