A recent Korn Ferry survey found that 83 percent of executives say, when hiring a college graduate, hunger and hustle are more desirable than pedigree, the caliber of the institution they attended.

There was no Instagram, YouTube, or Snapchat to mark that day— and the only “selfie” was trying to aim a disposable camera in the general direction of my own face. But the image is burned into my memory: It was September 4, 1984, and there I was in my Brooks Brothers suit and my shiny new wingtips, carrying the hard-sided leather briefcase I’d just bought.

As a graduate of the University of Southern California and having passed the CPA exam, I was fortunate enough to receive several job offers from accounting and consulting firms. I walked through the heavy oak door of Peat Marwick Mitchell (today’s KPMG) like I’d arrived—until I met all the others. There were 125 of us in that year’s class of new hires, in the Los Angeles office alone.

The picture in my mind changed instantly. There wasn’t anything special about me. Everyone in that room was smart—that was just the table stakes to get hired. Then they gave us the speech: Within two years, 50 percent of us would be gone—and even more within four years. Only one or maybe two of us would ever make partner. 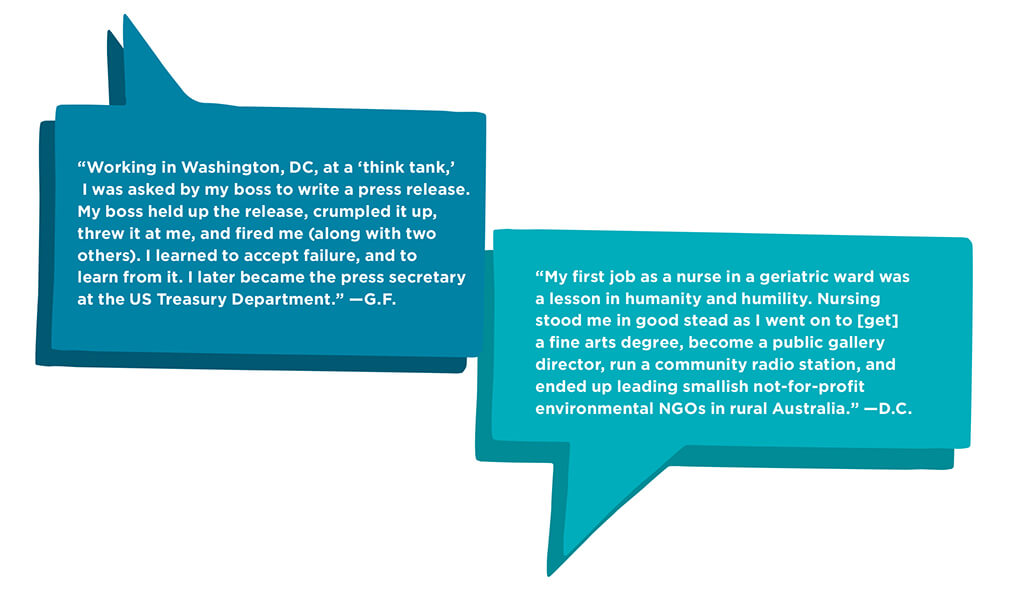 Although we obviously didn’t have webcams to record every moment as in today’s growing wave of “total transparency,” I knew others were watching me (and everyone else)—what I was doing and how I was doing it. It was all about being accountable.

Then came the instructions for our first assignment. We were moving boxes. I heard grumbling and complaints from others. And I’ll admit this was not what I’d expected. But I did what I was asked, and in the process, I learned two key principles: humility and hustle. That’s what this first job story is all about.

Humility is a lesson best learned early in your career, before you’ve risen too far so the fall back to reality isn’t such a drop. When I finished moving boxes, I was given a phone book and a 10-key calculator and told to add the rows of phone numbers to sharpen my 10-key skills. It was ridiculous busy work, but I did it without complaint, because that’s what I was asked to do.

I also noticed that certain people at the consulting firm stood out because they just “did it.” They had “hustle.”

All my young life, I hustled: delivering newspapers, painting houses, working construction—you name it. It wasn’t that we were poor; it’s just that we didn’t have any money. There is something about seeing, as a kid, all the furniture being repossessed and taken from the house that chills your bones. That image reminds me daily of where I came from and, more important, who I am.

My first real assignment at KPMG was doing inventory in a cavernous warehouse. My trial by fire from the warehouse manager was accepting (and drinking) a cup of coffee from a dirty mug he pulled straight out of the sink. But I got the job done—ahead of time and with a thoroughness that earned kudos from my boss. Most important, I earned the respect of that warehouse manager who saw that I wasn’t just another college grad who wouldn’t get his hands dirty.

Over the years, I’ve noticed how hustle and hunger quash pedigree every time. It’s been shown that people who have to scramble in their careers not only do well (and often better than their pedigreed peers), they learn from their failures and end up in a career that yields greater satisfaction. A recent Korn Ferry survey found that 83 percent of executives say, when hiring a college graduate, hunger and hustle are more desirable than pedigree, the caliber of the institution they attended.
The two Hs have served me well over the years. Flash-forward nine years after that first job, I was among a few people from my class at the firm who made partner. Flash-forward 23 years to 2007, I became CEO of Korn Ferry.