For most, roller coasters are a weekend thrill. But this multibillion-dollar business is full of leadership lessons.

Golf carts buzzed around the grounds, ferrying staging crews, their walkie-talkies crackling. Sets pulsed with bold colors—vibrant purples, neon greens, and fire-engine reds. The circuitous configurations of the queues spoke of big crowds to come, but for now they were empty. Everywhere it was nearly showtime; all that was lacking were the guests.

What felt like backstage at an open-air music festival, complete with well-stocked shelves of souvenirs, was actually preseason prep time at Six Flags Great America in Gurnee, Illinois, 40 miles north of downtown Chicago. It’s one of 26 Great America theme parks in North America and a small part of the $45 billion global theme-park and amusement industry that, according to the International Association of Amusement Parks and Attractions, is projected to grow by 6.5 percent annually to hit $60.5 billion in 2022.

When we visited, Six Flags Great America was open only on the weekends in preparation for the full season, which typically attracts hundreds of thousands of people each year. We walked the grounds with Lee Stellhorn, a corporate engineer for Six Flags Theme Parks, past the double-decker merry-go-round (one of only a few in North America) and an intensely twisted purple-and-green coaster named The Joker—located, appropriately, next to the rival coaster named Batman. Tall and lanky, with an easygoing manner, Stellhorn has been a roller coaster enthusiast since he was a boy. “To me, riding a roller coaster is a controlled thrill,” he says with a smile. And the thrills keep getting bigger, faster, taller. 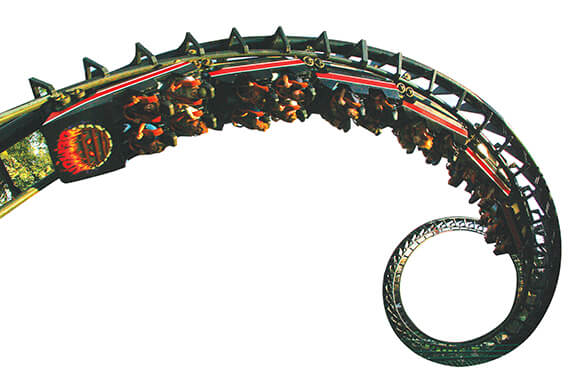 This year, Great America unveiled its newest attraction at the park and the 17th coaster on the property: the triple-record-breaking Maxx Force. This coaster has the fastest launch, going from 0 to 78 mph in less than two seconds; the fastest inversion—in other words, flipping riders upside down at 60 mph; and the tallest double inversion, at 175 feet.

The coaster comes on the heels of one innovation after another in an industry that seems to be on a continuous loop to outdo itself. Also new this year are the 220-foot Steel Curtain at Kennywood in Pittsburgh, with nine inversions, and the TMNT Shellraiser at the Nickelodeon Universe Theme Park in East Rutherford, New Jersey, with seven inversions and the steepest drop ever. Just to name a few. “In this industry, innovation is key, and it leads to a lot of firsts and new experiences,” Stellhorn says.

But innovation isn’t all that’s key in this business. The industry may be purely in the entertainment sector, but amid the screams and scares created for millions of thrill seekers, the firms behind all these rides are operating under some key leadership lessons. They too, for example, must focus on everything from customer loyalty to creating the kind of full-immersion consumer experiences that are not unlike some other industries. So join us on a different sort of ride. 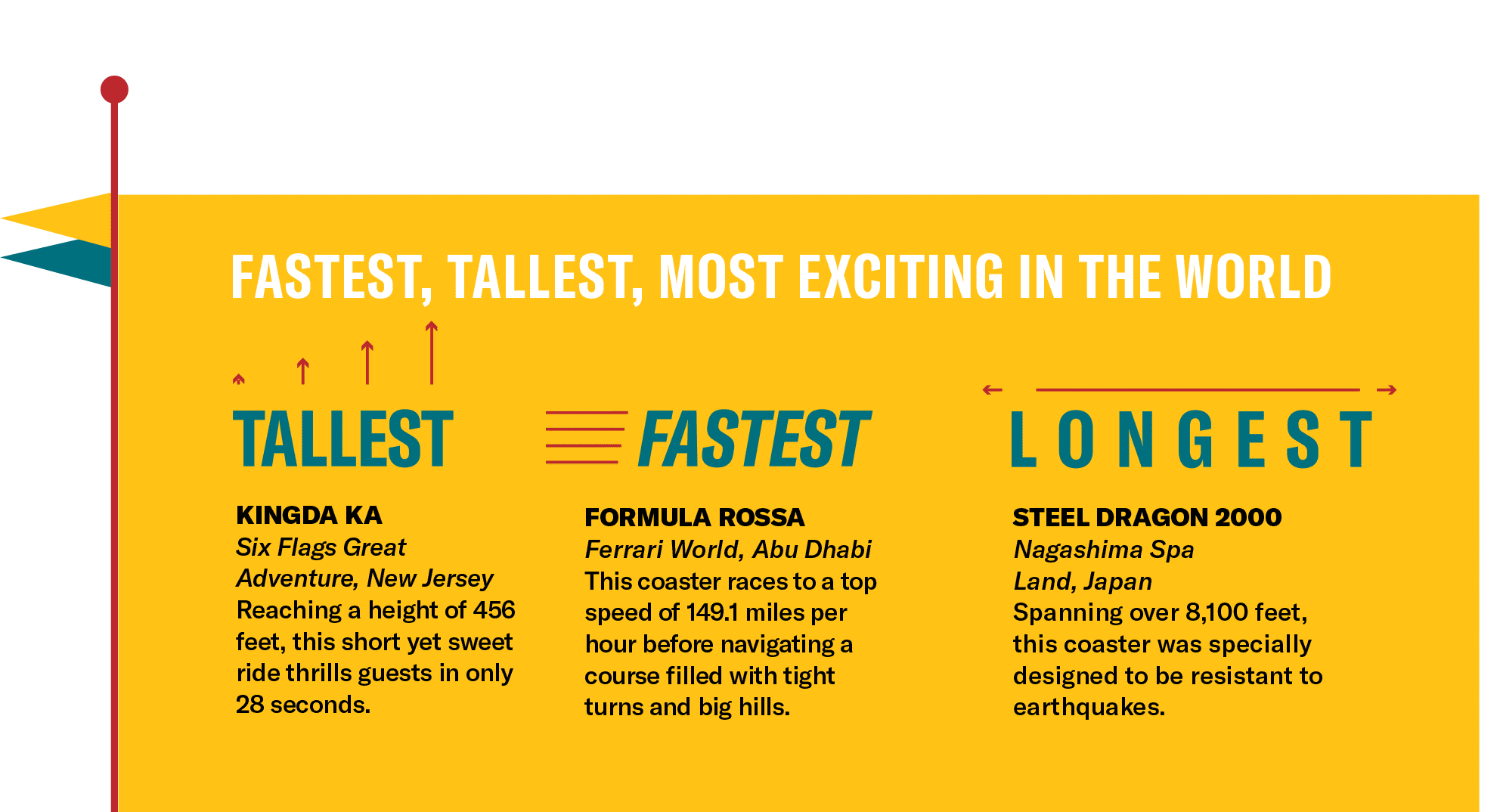 Today, there are nearly 5,000 roller coasters worldwide, typically centerpieces of theme parks. Some are hits right away, and some are not. Undeterred, the industry keeps expanding globally, as theme parks and amusements find enthusiasts everywhere. One of the fastest-growing regions is the Middle East and North Africa, where theme-park spending is expected to triple over the next five years. China has several new properties in works, including Universal Studios Beijing and Six Flags parks in the planning stages.

Driving that global growth is ­innovation—not just ever taller but creating thrills in all directions. “Flying coasters” simulate the experience of soaring through the air (riders are strapped in a prone position parallel to the track). “Wing coasters” seat riders on both sides of the track, with nothing above or below them. Add to that corkscrews, inversions, and airtime—that stomach-lurching feeling of floating out of your seat.

Driving all this innovation is a real passion among designers—those we talked to have been fans since childhood. In design labs and at drawing boards, experts say, imagination to dream up the seemingly impossible is the secret ingredient. Stellhorn recalls one roller coaster concept that literally started with a paper clip bent into a certain shape: “We said, ‘What if we could make something like this?’ It’s just a little bit of courage to take that step.”

For all the hype, not to mention wait times in line of two or three hours, the roller coaster ride lasts only a minute or two. The irony is, the faster roller coasters go, the shorter the ride. Even so, fans can’t wait to ride again and again.
For this industry, as in many others, the recipe for repeat business goes far beyond the ride—or the product. It’s creating a compelling experience, beginning with anticipation and continuing well beyond the actual “consumption.” According to Jim Mourey, assistant professor of marketing at DePaul University in Chicago, that could well be applied to the world of retail, to enhance online shopping experiences with interactive content and to create more memorable visits to brick-and-mortar stores.

“How do we think about what consumers are experiencing on their way into the store or while they are waiting in line?” he asks. “What is that service engagement like when they are actually consuming a product or service in-store?” For roller coaster riders, after the adrenaline rush, the fun is reliving it. That sparks a “word-of-mouth conversation after the ride is over, because the ride itself is too fast to take in all at once,” says Mourey.

A memorable experience doesn’t require being the fastest or tallest. It can also happen with a story, with amusement rides that create immersion into a different world—such as the Wizarding World of Harry Potter at Universal Orlando Resort in Florida, which spans two theme parks and includes rides through scenes re-created from the Harry Potter books and movies. The Walt Disney World Resort is also taking the storytelling route with the first roller coaster at its Epcot theme park in Florida: The Guardians of the Galaxy ride, set to debut in 2021, modeled after the Guardians of the Galaxy film series. “It may not be the fastest or the tallest or the most thrilling, but it’s telling a story that resonates with that brand community,” Mourey says.

Compelling consumer experiences bring together communities of fans who identify with particular brands. In terms of consumer psychology, brand communities are all about affiliation—think Mac computer users who distinguish themselves from PC people. Roller coaster enthusiasts are a similar breed. They want to be among the first go to there and ride that (ideally on opening day)—with the T-shirt and the social media postings to prove it. For brand marketers, that kind of engagement is a dream come true.

At the heart of the roller coaster community is a sense of achievement, says Mourey, and it’s a strong driver for consumer experiences. “It’s the anticipation of taking on a challenge and then living to tell about it afterwards,” says Mourey, who had to overcome his fear of roller coasters as a kid to join his siblings and cousins on the rides.

That sense of thrill and achievement attracts roller coaster fans of all ages and backgrounds. Alexandra Friedman, a business coach in Chicago, has been a roller coaster fan all her life. “One minute I can be screaming at the top of my lungs and the next flooded with a sense of joy and relief,” she says. Friedman spent her 50th birthday riding the Cyclone at Coney Island, while her husband and their friends looked on with bemusement. “It was me and a bunch of sweaty eighth graders,” she laughs.

A former sales training and development executive for Xerox, Friedman even sees business corollaries in her roller coaster passion. “Whether you’re launching a new product, merging with another company, or starting a new business venture, having the right strategy and the right resources in place will enable you to ride the highs and lows. At the end, you need to feel the journey was worth it.”

Now that’s something to think about while waiting in line for two hours.