Save My (Board) Seat

Many directors will lose their seats during this big year for mergers. But some will find ways to stay on.

The director spent days reviewing the takeover offer from her firm’s rival. The valuation seemed fair, and the rival CEO’s strategy was sound. So she, like the rest of the board, approved the deal and knew what would happen next: she’d lose her job.

But while all these deals make for big headlines and often lead to more competitive firms, job losses often follow—including for directors. After all, one firm left standing translates into one board left too. Academic studies have shown that directors on bought firms have only a 30% chance of keeping their posts. Even being on the acquiring firm is no guarantee: More than 80 percent of post-merger boards will have a new composition. “A transaction is an unfreezing event,” says Mitchell L. Marks, a merger and acquisition consultant and professor at San Francisco State University. “It will shake things up.”

Directors, of course, have a fiduciary responsibility to act in the best interest of shareholders, so they almost always unanimously approve a merger once negotiations are done. But experts say board members can change the odds for staying on if they have expertise the buying company needs. Contacts and networks matter too, of course. “There are no special rules in place around the mergers and the boards,” says Jared Wilson, a professor at Indiana University and coauthor of a recent working paper that analyzed board makeup before and after deals.

That was certainly the case in the more than 1,400 transactions Wilson studied. Looking at members of target firms who landed board seats, he says he noticed a clear advantage for directors with special skills. For instance, if the acquiring company is buying a company to begin doing business in Asia, the board may want to add a director who has experience doing business in Asia. The catch, Wilson says, is that the director must have experience above and beyond what they got from the firm being bought.

As one might expect, it can get a little more complicated when there is a so-called merger of equals—two firms of similar size uniting. All the directors in some of those cases sometimes stay on, creating an unruly-sized board of 20 people or more (the expectation is that some of the older directors will eventually retire and their spots will not be filled). But most often, the acquiring board will look to bring only one or two new directors after the transaction, says Dennis Carey, vice chairman of Korn Ferry’s Board and CEO Services practice, who has assisted in reducing the number of directors on a board after a merger of equals. “Thirty-two around the table is simply unmanageable,” he says. 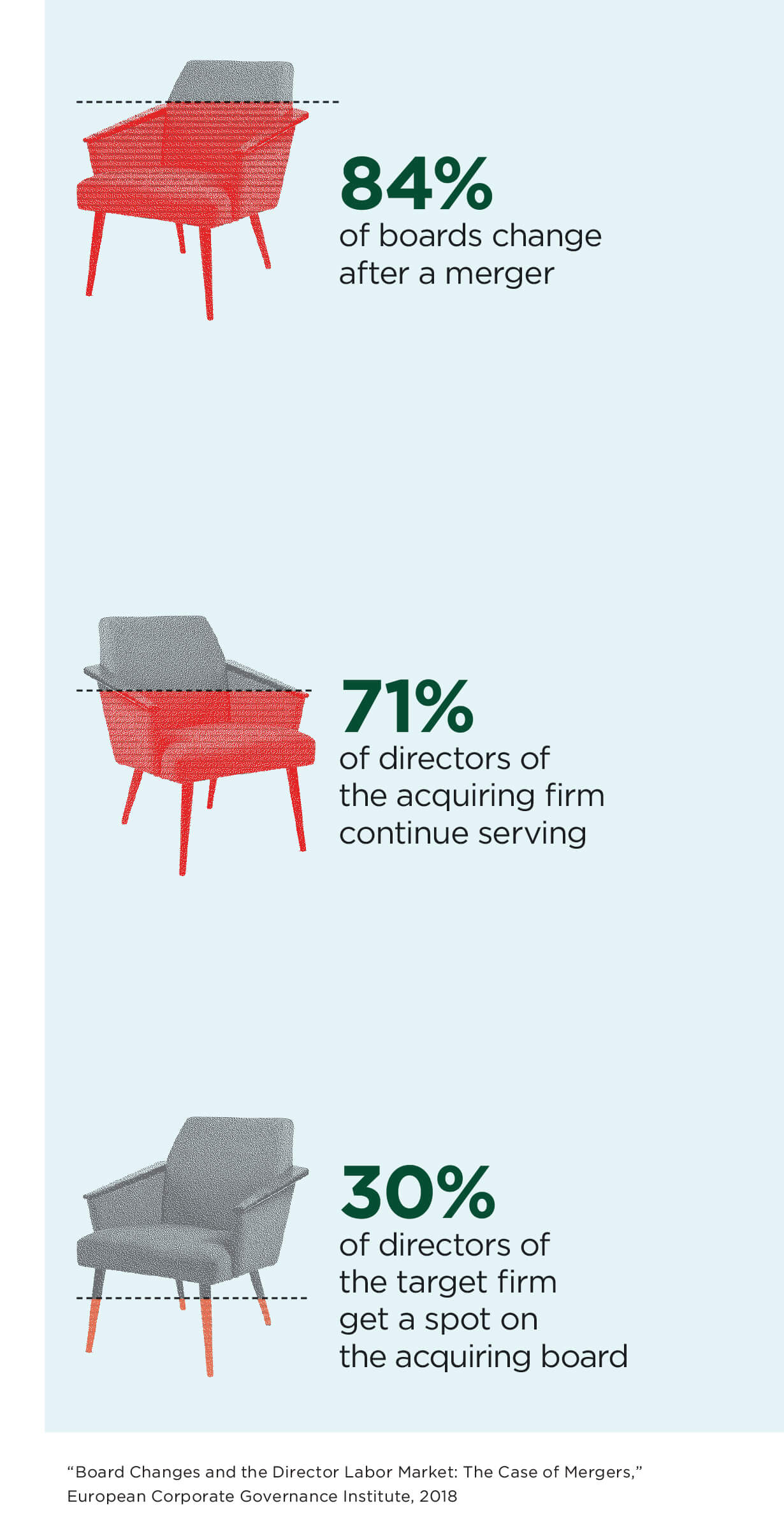