He’s the greatest coach in the history of pro football. Can emulating him help leaders triumph off the field?

Watching New England Patriots head coach Bill Belichick roam the sidelines during a National Football League contest, an oft-heard theory comes to mind. Belichick, the cerebral and hard-nosed mastermind behind the Patriots’ two-decade-long dynasty, is “playing chess while other coaches are playing checkers.” Other, far less flattering thoughts might be uttered by fans of any of the other 31 NFL teams; the Patriots and their tight-lipped, taciturn coach are often reviled. But even Patriots haters find it difficult to deny that Belichick is the greatest coach in the history of the league.

Spare me the barstool intelligentsia, who may cite legends such as Vince Lombardi, Don Shula, Tom Landry, or George Halas. Belichick’s accomplishments are unmatched. Entering this current season, his 20th as the Patriots’ head coach, his teams have gone 225–79 in the regular season, a whopping .740 winning percentage. They’ve won the AFC East division crown 16 times, including the last 10 in a row. In the postseason, the numbers are even more impressive:

The Patriots have won nine AFC championships, appearing in nine Super Bowls. They won six of them, tied for the most in league history, all under Belichick. His list of NFL records and achievements fills several pages in the Patriots program and, at age 67, he is without peer in the current NFL coaching ranks. Belichick’s achievements are all the more astounding given the demands of the modern salary-cap era and free agency, which makes it far more difficult than ever to win consistently and remain at the top.

What makes him distinctive is his absolute focus on winning, a trait that is the same in a locker room as in a C-suite, says Stephen Greyser, emeritus professor of marketing and communications at Harvard Business School. Moreover, Belichick has assembled a top-flight “next level” of coaches and executives within the organization, the equivalent of a senior management group. “He has built a coherence in the locker room that is crucial to winning,” Greyser says. 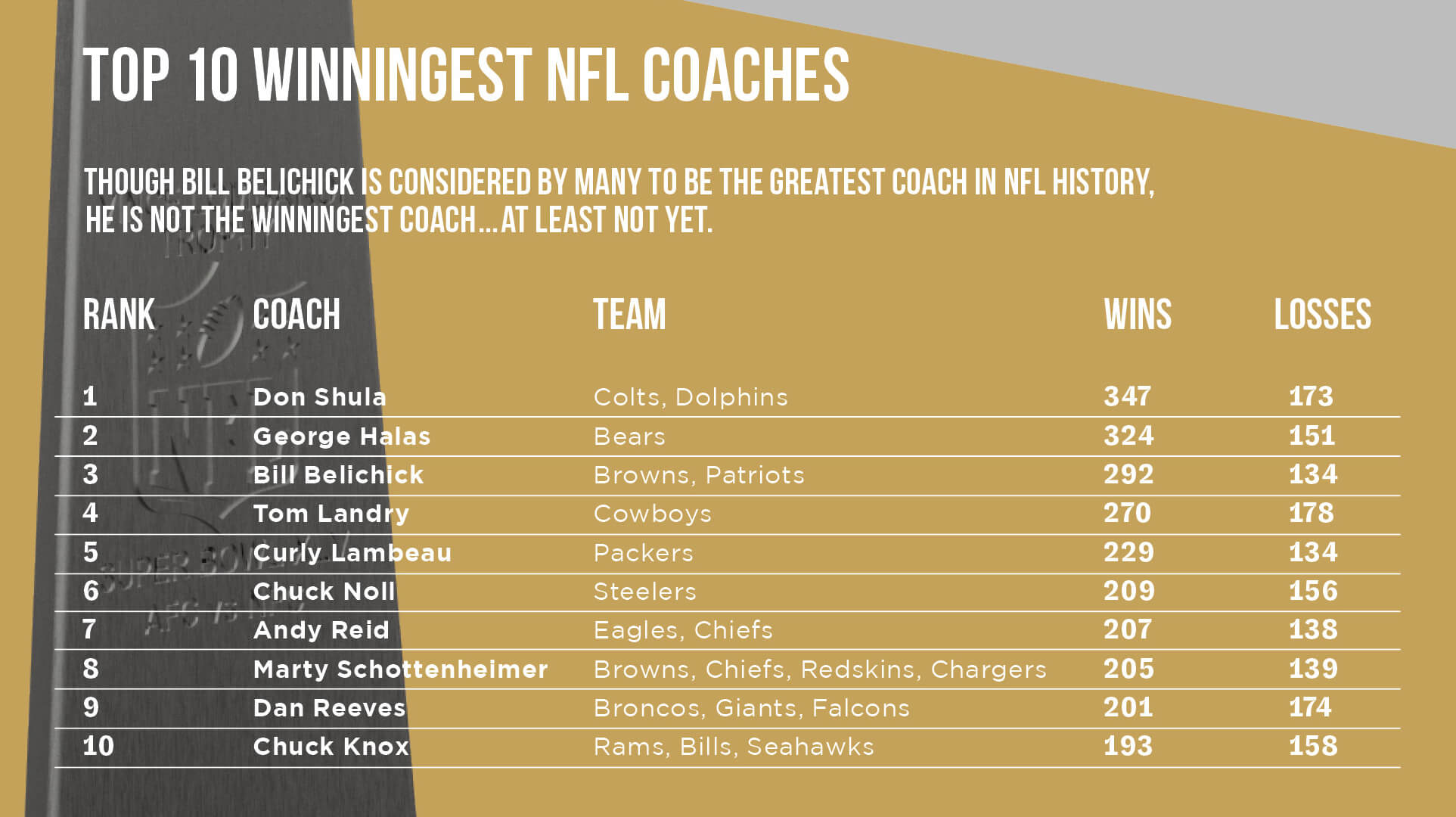 Belichick also has something even senior executives may envy: total control. “Belichick has a strong alignment with ownership,” says Jed Hughes, vice chairman and global head of the Sports practice at Korn Ferry. “He runs the whole show and is not battling a general manager. He has total control over all decisions and gets a lot of input from people he trusts. One thing that separates him from a lot of people is his decisiveness.”

Media averse, unsmiling, and not particularly charismatic in most public settings (postgame press conferences in particular), Belichick will never win a popularity contest among NFL fans. Fans of opposing teams find him arrogant and dour. But he is both admired and feared by fellow coaches, who recognize and appreciate his consistently excellent decision-making. Patriots fans, sometimes surprised by his personnel moves and his dispassionate disposal of popular players, long ago made clear how they feel. The local mantra is unambiguous: “In Bill we trust.”

Despite his social shortcomings, Belichick exemplifies the successful leader who consistently overcomes ceaseless obstacles and continues to win. Even though an NFL locker room bears little physical resemblance to a corporate boardroom, the Belichick Rules offer potent ideas for CEOs who seek to improve their leadership game. Given that the average tenure of an NFL coach is 4.3 years and the average CEO lasts 5.6 years, Belichick’s staying power—he is the longest-tenured coach in today’s NFL—is noteworthy. Having the acknowledged greatest quarterback of all time, Tom Brady, by his side for 19 of those 20 seasons has had no small impact on Belichick’s success, of course. But the depth of Belichick’s brilliance clearly goes beyond any single player, even Brady.

Belichick’s story has been told often enough. The son of a successful college coach and scout, he began studying game film at age 7 and had his heart set on an NFL coaching career from adolescence. His father, Steve Belichick, was an assistant coach at the Naval Academy, a legend among college coaches for his scouting abilities during the 1950s and ’60s. Steve’s influence on his son was profound.

“By watching him, I learned to see the game, how well prepared you have to be, and how quickly your eyes have to shift,” Belichick told author David Halberstam for his 2005 book The Education of a Coach.

Though he was an average student and an undersized football player at Wesleyan University, Belichick had an aptitude for the game that consistently impressed his coaches. After graduation, he started on the bottom rung with the Baltimore Colts in 1975, getting paid $25 a week.

“I never felt I had to reach or was in an alien profession,” he told Halberstam. “I knew I had a better instinct for it than some of the older coaches on the staff. What I didn’t know, I could learn—one of the things I had working for me was that I knew how to learn.”

From all that, a template emerged that forms the foundation of the Belichick Rules for winning, guidelines that are transferable to industries that don’t involve a football: 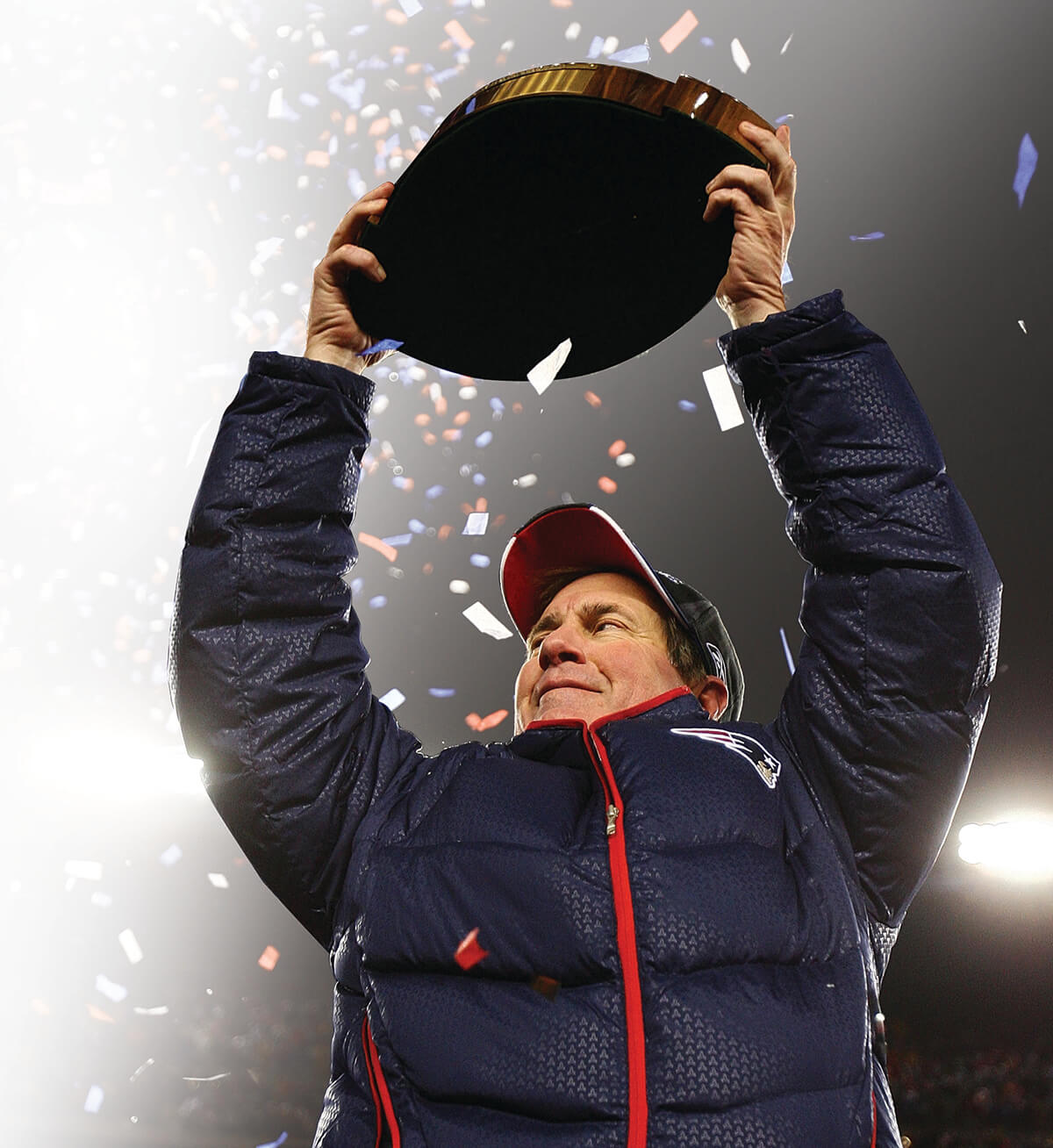 “His game plans are never the same,” Hughes points out. “If you are in business, you are constantly looking at your competitors and what they are doing. Belichick is always devising something that will take advantage of his competitors’ weaknesses. He does that week in and week out, better than anybody else. And he does it on all three sides of the ball.”

Be the most prepared.

“The only sign we have in the locker room is from The Art of War,” Belichick said in a 2017 interview with CNBC. “‘Every battle is won before it is fought.’ You have to know what the opponents can do, what their strengths and weaknesses are, and what to do in every situation.” To that end, he is constantly learning, about the implications of the salary cap, about every player’s background and emotional intelligence, and about how to make all the pieces fit together.

Be decisive under pressure.

Halberstam interviewed Ernie Adams, a Belichick classmate at Phillips Andover who became a career-long colleague. According to Adams, Belichick excelled not only in preparation before a game but also while the game was actually going on. He was much more analytical than most other coaches, and he never lost that analytical ability, not even in the tensest moments of a game. He also was never a prisoner of what he had decided to do beforehand. “He had the rarest kind of ability: the ability to see the game as if it was over, even as it was being played out,” said Adams.

Belichick lets it be known that there is only one whistle … and he has it. “There is no doubt that he is the CEO,” says Harvard’s Greyser, who has long studied the business of sports. “He has complete support from ownership, the equivalent of his board of directors.”

Early in his Patriots tenure, Belichick instituted what became known as the Patriot Way, a set of guidelines for how players and coaches behave, and he has never hesitated to invoke it, even if it means trading or releasing popular and successful players. In 2001, for example, the All-Pro starting quarterback Drew Bledsoe, a popular and successful veteran, was injured in the second game of the season, against the New York Jets. His backup was Brady, who at the time was a virtually anonymous second-year player. But Brady led the team to the playoffs. By that time, Bledsoe was healthy again, but Belichick made the decision to stick with Brady (Bledsoe was eventually traded). The move, to say the least, paid off.

According to Hughes, Belichick teaches his players and coaches in a unique manner, which in turn creates great teachers out on the field. “He is intent on knowing what he doesn’t know and bringing in the requisite experts to drive the organization forward,” Hughes says. When the offensive line was struggling for two seasons after superlative offensive-line coach Dante Scarnecchia retired, for example, Belichick offered a lot of money to convince Scarnecchia to return in 2016. He knew the importance of keeping Brady from being hit and harassed, and he also knew that Scarnecchia was the best in the business. Since his return, the Patriots have played in three straight Super Bowls, winning two of them.

Belichick often dismisses the idea that achievement on the gridiron would translate into immediate corporate success. After all, there are many intangibles in both football and business. But nothing succeeds like success, and the principles he effectively deploys in New England reflect a unique set of skills that are translatable.

The most successful business leaders have all been enigmatic to a degree, and Belichick is no exception. He has mastered the art of revealing little, holding emotion in check, and saving his best performances for gridiron Sundays. Not unlike an iconic general, Belichick has made an art of leading without overwhelming ego and finds ways to draw the most and best from his troops. In an era of high salaries and players exerting more control over their careers, the ability to push the organization in one direction, without distraction, should be the goal of any CEO.