It sounds like some fantastical Blade Runner-esque future. Fleets of autonomous driverless cars flowing effortlessly under a neural net that controls traffic. 3-D holographic meetings among employees across the globe. Swarms of messenger drones buzzing through cities to deliver packages. Smart glasses that let users instantly identify anyone, anywhere.

As communications systems go, 5G may be oddly named, but the hype about its potential is no exaggeration. In short, experts say, 5G adds the instant to instantaneousness, a true step up from what anyone can imagine today. But what technology giveth, technology can taketh away, and for now, companies appear barely able to grasp either its potential opportunity or the nightmare scenarios.

On the one hand, 5G could inject $12 trillion into the global economy by 2035 and add 22 million new jobs in the United States. On the other, many of these jobs will require specific skills, and there may not be enough qualified personnel. In the long term, the machines may take over the planet, but in the short term—say, the next 30 years—there may not be enough humans in the workforce.

Take the sheer number of devices (including the Internet of Things, or IoT) that will plug into 5G networks. “We expect the number of connected devices to go up a hundredfold,” says David Barnette, sector lead for communications and devices in Korn Ferry’s Professional Search practice. Indeed, estimates state there will be 21 billion devices by 2025. But each one is a point of entry into the network, which will spawn a security challenge and a new class of security professionals, whose numbers are already short. Plus, all of this interconnectedness will generate unseemly amounts of data. “It creates a crunch within data science—data science security, for example, areas that are already hot,” Barnette adds. “Companies will have trouble filling these positions.” 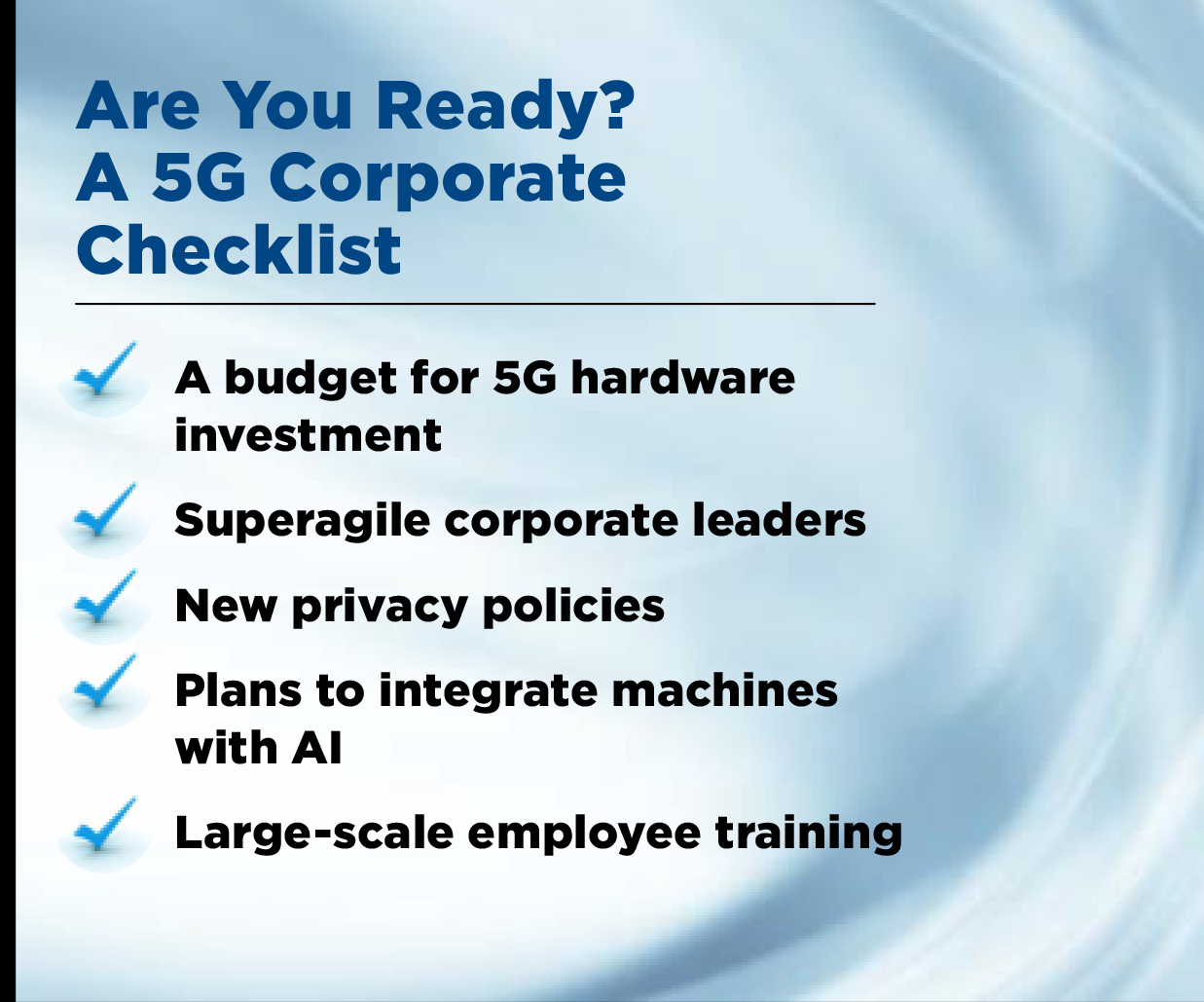 Therefore, Barnette proposes, “you can try to outbid talent competition, or you can create academies to develop that talent.” Whatever the case, companies will need to invest in ongoing education. The only problem? “Even if companies have a budget for retraining, they are often reluctant to use it,” says Dr. Rikin Thakker, a research assistant professor in the Department of Electrical and Computer Engineering at the University of Maryland.

Nevertheless, Sylvain Rochon, who markets himself as a futurist, prefers to view the big picture. Because of 5G, he says, labor could be more adaptable. Remoteness is enabled, so workplaces will become collaborative social spaces because workers could do their jobs from anywhere in the world. That will likely translate into fewer full-time employees and more contract workers—
more consultants, and far greater reliance on
the gig economy.

What’s more, there will be privacy implications. Rochon says companies will easily be able to track whatever their employees and consultants are doing at any time. “Because of geofencing, you can know if anyone is beyond the bounds of where they should be, so that helps covers your liability,” he says. “Instead of floors, offices, and cubicles, businesses will have far less overhead. You go to the office to get that energy and synergy from people. The actual tasks, you stay home to do them.”

As 5G networks spread across the US, experts say companies should plan for the incoming tech tsunami. First, they should create a 5G strategy so that they aren’t caught with their digital pants down. They need to budget for investment in 5G hardware so they have 5G-ready equipment for when there’s a full-scale launch. They should be on the lookout for corporate leaders who understand the changes that 5G will bring as well as fortify their data analytics divisions. Finally, they need to plan for a new wave of automation and artificial intelligence and work with engineers to reassess operations where machines can be automated and artificial intelligence can be integrated.

Companies that do all this, pros say, should be able to ride the 5G wave. “Within 20 years, we’ll have widespread artificial intelligence because of 5G,” Rochon says. “We’ll have to transform
our economy.”