Birding gets a boost during the pandemic.

Under a hot sun and an intensely blue sky, we climb a steep gravel path up Mount Pisgah in Eugene, Oregon. At the summit, we’re treated to a 360-degree view of rolling hills and, in the distance, the last traces of snow atop the Cascade Mountains.

Suddenly, we’re distracted by a dark shape riding low over the tops of dense pine trees not 50 feet from us. Wide wings pump in the still air, then catch an air current, and the bird soars higher. It’s a red-tailed hawk, which are common here. But for us, it’s thrilling to see one so close.

Without really intending to, we’ve joined the 50 million Americans who observe wild birds every year. Some are casual watchers. Others are die-hard enthusiasts—birders like Jay Risk, a retired nonprofit executive in suburban Chicago who has helped introduce many others to this world. Over decades of watching birds, from bald eagles in Alaska to the secretive ovenbird hiding in the undergrowth of native prairie plants, Risk has amassed a birding list of 400 species—and counting. (There are about 10,000 bird species in the world.) Without hesitation, he explains the fascination. “It’s life-changing,” he says.

This is clearly one of the reasons why birding has exploded during the pandemic. As personal space feels smaller, noticing more makes it feel larger. Plus, birds are everywhere, from country roads to city parks, and on every continent including Antarctica. 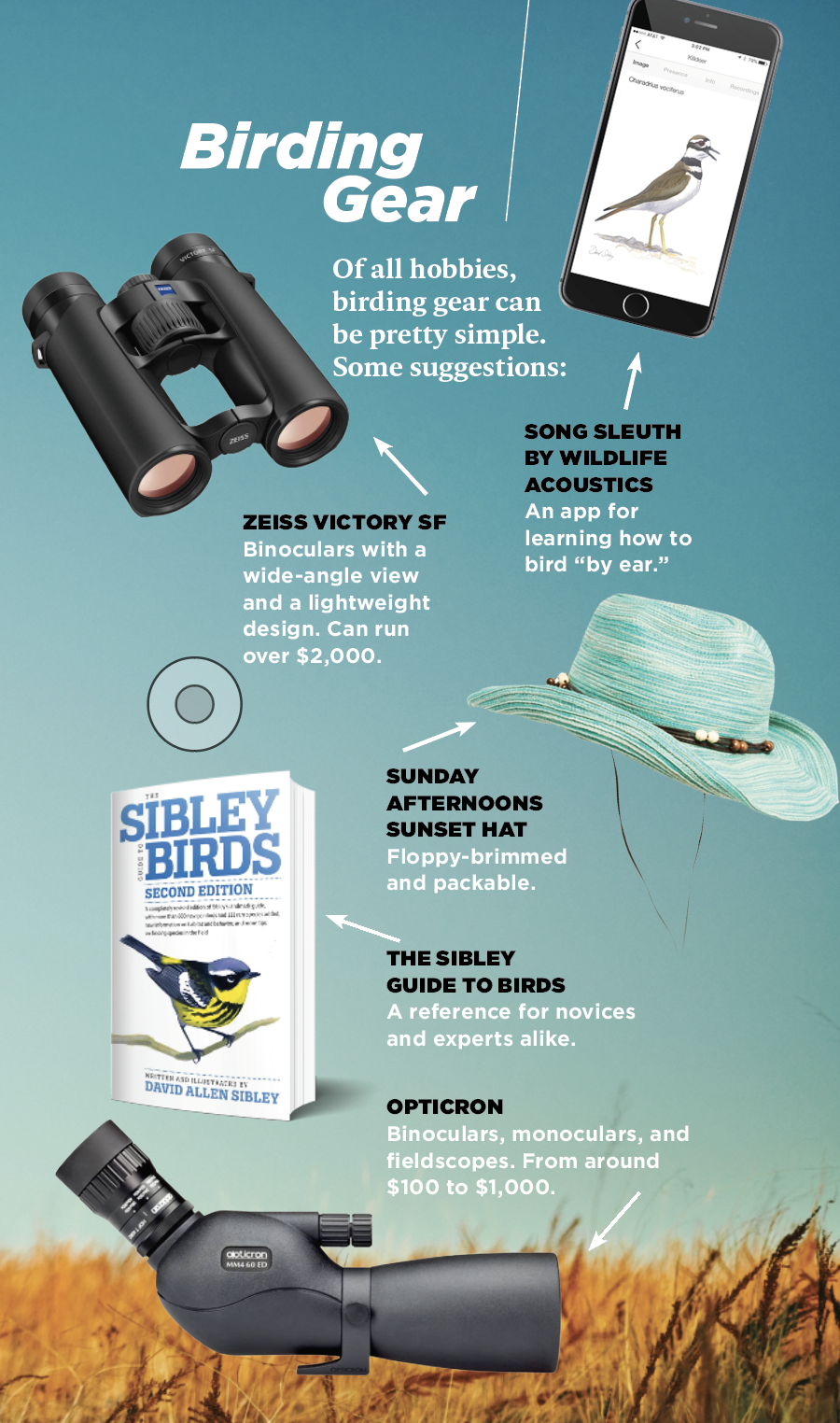 A hearty, bearded outdoorsman, Gordon spent his early career traveling the world as an ecotourism guide and has led many CEOs and other leaders on birding outings. Birding is full-immersion in nature with the excitement of the hunt—armed only with binoculars, of course.

One option, Gordon tells us, is to “camo up” and sit in a hunting blind in a field or woods to silently observe what emerges. The other is to go on a quest to find a particular bird—say, a sky-blue cerulean warbler—“a treasure hunt that’s very directed.”

And sometimes, it just happens. After our hike up Mount Pisgah, as we sit on a backyard terrace, a darting stranger comes to a standstill. A brown-feathered rufous hummingbird—we looked up the name later—hovers just over our heads.

While birding (or bird-watching, as it’s also called) may conjure up images of people in tweeds and sensible shoes with ornithology guides in hand, it has fans of all ages. For instance, Risk shares his enthusiasm with his adult son, who has translated an interest into academic studies in environmental science, and now his grandchildren. It’s a legacy he considers important to pass from generation to generation. “When you’re a birder, sooner or later you decide you are going to make the future better,” adds Risk.

Even as birding grows in-person, there are online alternatives. Cornell University’s School of Ornithology (birds.cornell.edu) offers the eBird online platform of live streams, videos, and photos of birds around the world. The Audubon Society (audubon.org/birdcams) offers up-close looks at everything from Atlantic puffins to ospreys nesting near San Francisco’s Golden Gate bridge.

While people aren’t traveling much these days, the birds haven’t stopped. Many migrate seasonally between the Southern and Northern Hemispheres. For Gordon, that meant keeping up his birding while sheltered in place outside Philadelphia. “It was kind of refreshing to be at one place and let the birds come to me.”