How can firms reverse last year’s historic exodus of female professionals from the workforce during the pandemic?

Among the catastrophically awful economic damage produced by COVID-19, one number in particular stands out: 2.2 million. That’s the number of American women who dropped out of the workforce between February and October 2020, according to the National Women’s Law Center.

It’s one thing to get those women back into the workforce, but it’s another, far trickier obstacle to get high-achieving women back into the executive ranks, or at least on track to join them. While hard numbers have yet to be produced, leadership experts believe that besides the women who actually left their jobs, there are hundreds of thousands of high-achieving women who have worked fewer hours, turned down high-profile projects, and taken leaves of absence to take care of family members. All of those actions put women at risk of missing out on promotions and raises or seeing their careers sidetracked in other ways.

Organizations have to move fast to fix the issue, because high-talent women are already questioning their roles. In one survey, one in four women said the pandemic is making them consider either leaving the workforce or downshifting their careers. “The pandemic could wipe out all the hard-earned progress we’ve seen for women in management in a single year,” says Rachel Thomas, cofounder of the women’s leadership group Lean In, which cosponsored the survey.

Indeed, the pandemic laid waste to wide swaths of the female workforce at a time when there were multiple encouraging signs for women at the highest levels of corporate America. By the end of 2020, there were 30 women CEOs leading S&P 500 firms, an increase of 25 percent from just two years before, with two more scheduled to take over in early 2021. More than 28 percent of S&P 500 directorships are now held by women, and nearly 226 of the boards of those big companies comprise at least 30 percent women.

But while multiple milestones have been set at the top of the corporate ladder, the damage done below the top rung has experts worried. Nearly two-thirds of senior-level mothers have been unable to “perform optimally” or have revised their career goals during the pandemic, according to Catalyst, a women’s leadership research group. Only about half of senior-level fathers said the same thing. “We’re seeing a downsizing of ambition because of the stress of parenting,” says Amelia Costigan, a senior director at Catalyst. “It’s almost like women are stepping off the career path temporarily?…?and we know from previous studies that it’s a lot harder for women to step back in.” In other surveys, female executives reported that they were more likely to feel exhausted, burnt out, or under pressure to work during the pandemic than their male counterparts.

The issue is on the minds of some of the most powerful people in business and finance. This winter, Federal Reserve Chairman Jerome Powell said his biggest pandemic-related fear is the long-term damage to both the economy and people’s livelihoods from women being pulled out of the labor force and kids falling behind in their education. But that awareness, experts say, needs to be transformed into action, because companies are already seeing the results of not specifically helping women back onto the leadership track. “If I had a panic button, I’d be hitting it,” Thomas says.

If they aren’t already, companies should offer flextime that properly addresses the multiple issues many female leaders or high-potential women are dealing with at home, such as having childcare only a few days a week, says Trish Foster, executive director of the Gloria Cordes Larson Center for Women and Business at Bentley University. Those benefits, in addition to expanding caregiving leave and stipends, and bolstering mentorship and sponsorship programs, should become permanent, rather than disappearing once the virus does. During the health crisis, organizations should also consider adjusting goals and expectations and revising performance reviews—or perhaps skipping them altogether.

The worst-case scenario is if even more women feel unsupported and leave, says Jane Stevenson, global leader for CEO succession at Korn Ferry and head of the firm’s Advancing Women Worldwide initiative. Many women who leave the workforce for any significant amount of time are, often unfairly, thought to have lost some professional abilities during their absences. “What we need to think about is how we enable women in the workforce—all women, but especially high-potential leaders—to weather the storm,” Stevenson says. 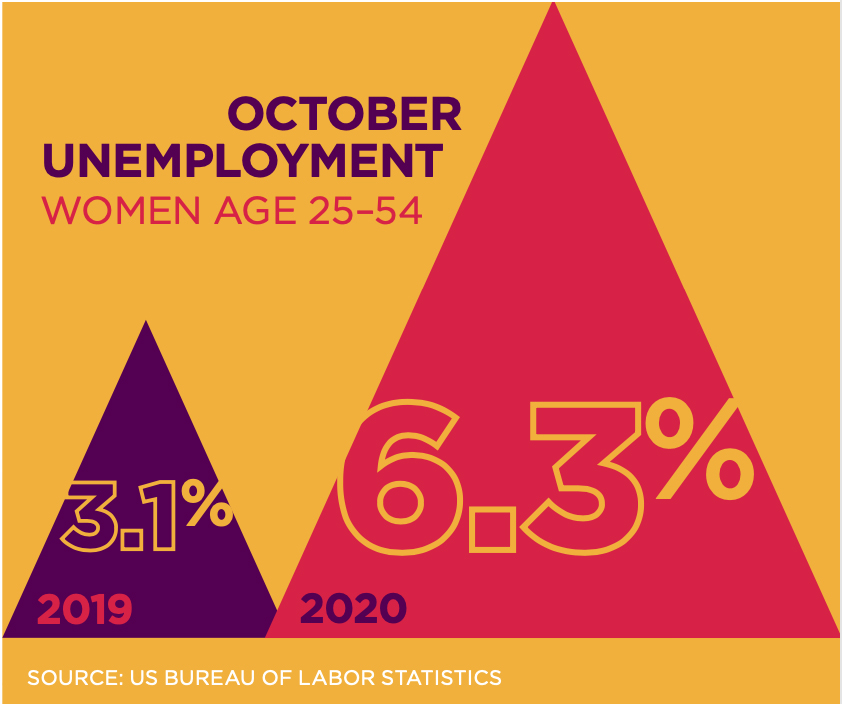