In Business We Trust

With the pandemic still with us, many are looking to businesses to save the day. Will firms deliver?

Government is supposed to be the Big Protector. Elected officials are the ones tasked with holding the Bernie Madoffs and Enrons accountable and, the thinking might go, responding to health and economic crises like those occurring today. But what happens when we the people no longer have confidence in our public servants to get the job done? Well, we put our faith in the almighty market.

According to some recent surveys, more people now think companies are doing a better job than governments at the very job elected officials are meant to perform: running countries. In one report, by the Milken Institute and the Harris Poll, 61 percent of people thought businesses were “more reliable” than government, with the trust extending to firms in every country across the globe. The same survey suggests that a majority of people—55 percent—are actually counting on corporations to find the answers to COVID-19, and a whopping eight in 10 expect firm leaders to speak out on social issues. “In previous crises, business was often seen as part of the problem,” the report says. “This time they are part of the solution.”

All of which is quite a departure from the past. Back in the ’80s, of course, cynicism seeded a famous “greed is good” era, and more recently, the financial crisis of 2008 shook people’s confidence in all things business for years. The mostly White faces of corporate C-suites and boardrooms added to an out-of-touch glare. But experts say governments across the globe were presented with two of the biggest calamities in modern history—COVID-19 and the resulting economic collapse—and came back with generally clumsy and disappointing responses that opened the door for business to step in.

When governments were unable to roll out adequate COVID testing sites, companies created their own far smoother and far faster testing programs for employees. Governments locked down cities and left millions unemployed, creating only marginal assistance programs. Companies, meanwhile, rushed in to create an unprecedented infrastructure to allow just as many millions to keep working remotely. Political partisanship and a controversial presidential election created an impression that government leaders were fighting against, not for, solutions. During that time, business leaders, such as those in the medical field, formed partnerships to pass out life-saving equipment and develop a vaccine. 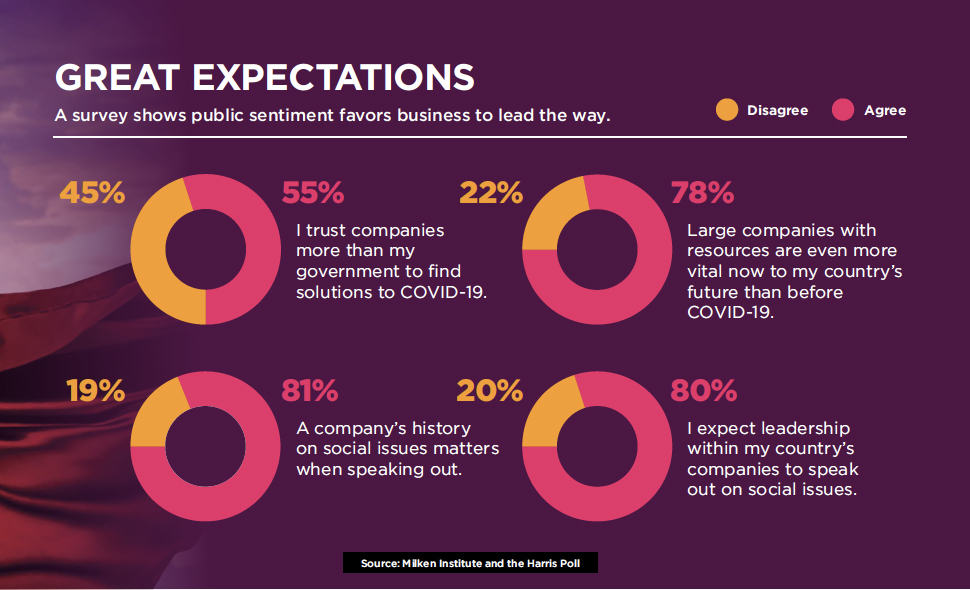 Certainly, the profit motive wasn’t far behind a lot of business responses, and experts say such dual roles will make managing the business world’s newfound trust difficult, especially as a tired public emerges from this pandemic more skeptical. “If a company steps out of line or starts lying on material facts, it pretty quickly will be held accountable,” says Eric Orts, a professor of legal studies, business ethics, and management at the Wharton School of the University of Pennsylvania. Indeed, any company is just one CEO scandal or factory injury away from being cast alongside politicians and pundits. Or as Rob Blair, an assistant professor of political science at Brown University, explains it, gaining people’s confidence can be a blessing—and a burden. “Trust is hard to sustain and quite easy to lose,” he says.

The business world also is operating in a purpose-driven environment that demands more transparency and fair treatment of customers and employees. So even C-suite compensation, as it relates to the rest of the workforce, matters. In one poll, some 86 percent of people expect CEOs to lead on societal issues. “It’s necessary for companies to meet the public where they are,” Orts says. “People trust companies when they start to come forward to recognize big issues and start to make changes.”

Experts says firms have only one option: do a lot of rethinking on their entire operations. Trust can make a big difference on the profit side, drawing in more customers, clients, and other stakeholders. But keeping the greater good in mind at the same time is quite a balancing act. “If business leaders go too far over the line, they will soon be seen as looking out for themselves and no different than our partisan leaders,” says Dan Kaplan, a senior client partner in Korn Ferry’s Chief Human Resources Officers practice.