Joe Rezendes was looking forward to the release of Avengers: Endgame, a much-anticipated climax of the blockbuster Marvel movie series. He was sure he wasn’t the only one, so a week before it hit theaters, in spring 2019, he decided to invest in its production company, Disney, and cash in on the enormous buzz.

Rezendes, who at the time was 21, had made only a few small, simple trades before then. But the digital autodidact had taught himself to code; he was confident he could learn his way around the financial markets. Using the mobile trading app Robinhood, he purchased a single call option, a risky but high-reward maneuver that locks in shares at a certain price. Sure enough, the stock rose by $15—turning his $70 investment into $1,400. “From there, it changed forever,” says Rezendes, a software engineer in San Francisco who is now well-versed in the various trading mechanisms. “I was hooked.”

It has become one of the most important financial stories of late: the growing influence of individual retail traders. This Reddit-powered, Robinhood-riding cohort made headlines a few months ago by unexpectedly sending the stock prices of several firms skyrocketing: Hertz brought back from the brink of collapse! Tesla up 1,000 percent! GameStop soars to more than $400! Since the onset of the pandemic, rebel investors, as they’ve been called in the wake of massive market disruptions, have beaten the Wall Street set at their own game, to the dismay of many.

“There has been a germination of individual investor activism.”

The armchair investors’ success at varying times has been a sign of measured strategy, social media hype, and simply a string of good fortune on a gambler’s run. But there’s no denying the shifting power dynamics: small-time retail traders outperformed the S&P 500 index by 45 percent from March through December 2020 and earned almost double the gains of professionally managed firms, according to Goldman Sachs data. There’s more: as these lone investors realize their collective power, experts warn, it may not be long before they become even more assertive. “There has been a germination of individual investor activism,” says Bruce Goldfarb, CEO of Okapi Partners, a proxy solicitation firm. “Shareholder activism is a powerful tool and one that many business leaders would do well to appreciate.”

That fear has led to a lot of questions about this new generation of investors—and what that “germination” of activism might grow into. Even if regulators try to step on the new user-friendly platforms that have emboldened this sort of trading, it seems a radical democratization of investing is underway that may prove far more influential than any other form of protest in corporate America’s history. Imagine, experts ask, if Occupy Wall Street were to take place tomorrow instead of 10 years ago, with its occupants able to sink stocks instead of squatting in a park? “Companies—their management teams and boards—need to very quickly understand who their investors are, how they think and behave, and how to reach out to them,” Goldfarb says.

Even with all the attention they made this year shifting stock prices, this new class of investors is a mystery to most in the C-suite or boardroom. Start here: they are young (the average user age on Robinhood, their preferred broker platform, is 31), inexperienced (more than half have never invested before), and extremely online. Unlike the forgotten Gen Xer of the “greed is good” era, these individuals came of age during the ideals of environmental, social, and governance investing, or ESG. (On Rezendes’s LinkedIn profile, he describes his engineering work in terms of purpose: “Creating beautiful software is my way of creating a better world.”)

Using a host of contemporary, no-fee online trading services, these self-styled day traders have poured into so-called “meme stocks” (think the battered movie chain AMC), along with buzzy tech companies and Gen Z favorite sectors like cannabis and crypto. For most, this is a side hustle, yet another manifestation of the gig economy. There have been reports of parents opening up accounts for their teenagers, and millennials free of domestic responsibilities depositing their stimulus checks straight into Robinhood. E-Trade, Charles Schwab, TD Ameritrade, Robinhood, and other similar products together added 8 million new users in 2020. Today, small retail investors make up an all-time high of almost a quarter of equity trading. 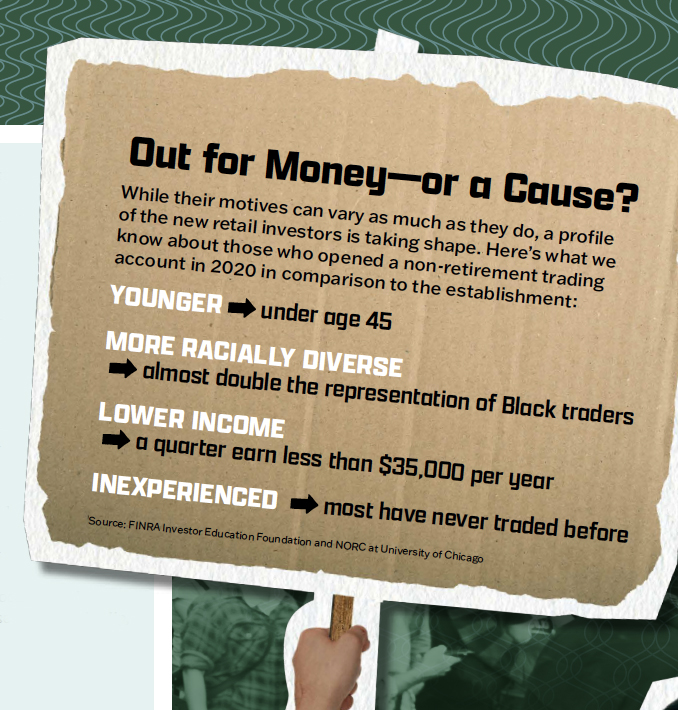 Many treat holdings as a free lotto ticket. Platforms like Robinhood make incredibly risky trades easier than ever—and also more appealing than ever. Critics charge that these apps have gamified derivatives trading, with their one-touch functions and confetti-emoji behavioral nudges creating an addictive urge for ever more and ever riskier behavior. Whereas portfolio managers are professionally obligated to diversify and manage risk, the armchair investor, who pre-pandemic might have bet on sports or spent money traveling, is free to hunt for massive returns at the expense of big losses.

Beyond striking it big, there’s also the drive to amass social capital. For millions, that takes place online in forums like Reddit’s now-infamous r/WallStreetBets, where users post screenshots of all-in hands and huge payoffs, urging one another into bet-the-farm YOLO (“you only live once”) trades. It was this dynamic hive mind that created the army of small traders that pulled off the massive short squeeze on GameStop. “It’s not luck, but in general I don’t think it’s a skill,” says ControlPlusZ, one of the site moderators of r/WallStreetBets, to Briefings. “If you understand this [feedback] loop, you can see how equities can become disconnected from their intrinsic value.”

Regardless, these traders actually served as a buffer for businesses during the worst of last year’s economic downturn, working to stabilize the equity markets. A Bloomberg Business analysis shows the most popular stocks traded on Robinhood were up 56 percent on the year and 90 percent since lockdowns began. “A lot of people get timid when things are crashing, but that’s actually a great time to be purchasing,” says Asad Ahmad, the 28-year-old CEO of the social payment start-up PaySplit in Las Vegas and an avid trader on Robinhood. Ahmad bought into Wynn Resorts during the dip, when it closed as low as $43 per share. By March, it was trading above $130.

While the Rezendeses and Ahmads may not be revolutionaries, trading has empowered them to build their own future by expanding their wealth—or burning it in the name of sticking it to the aristocratic elite. It’s a power that no other generation has had. Unlike the Occupy protesters, who were armed only with picket signs, activist investors get a seat at the table. “Over the last decade, we’ve witnessed the growth of a class of activist investors with significant capital,” Goldfarb says. “They can punish but they look to create reward. They have a powerful voice.”

And they are sending an emphatic message: boardrooms and banks don’t allocate value. Increasingly disillusioned over income inequality and climate change, millennials and Gen Zers, experts say, resent corporate inertia when it comes to solving the host of ills young people are inheriting. As employees and consumers—and now investors—they continue to find new ways to hold companies accountable. Goldfarb warns that once an activist investor (or influential Redditor, these days) is involved publicly, a company’s shareholder base can change dramatically and rapidly. Understanding the concerns and motives of various constituents is crucial.

To be sure, aggressive investors buying or shorting stock isn’t new. Nor is activist investing. The last three decades were filled with hostile takeovers and outsize bets on a company’s outlook. Chad Astmann, Korn Ferry’s global cohead of investment management, hears in today’s market chaos echoes of the dot-com boom of the early aughts. Then as now, a cadre of digital natives flocked toward venture-backed tech outfits and fueled some hard-to-explain valuations. “We’ve seen this movie before,” Astmann says.

Whether this is a lightning-in-a-bottle moment or the opening salvo of a much larger reckoning may largely depend on the courts and lawmakers. The Securities and Exchange Commission and federal prosecutors have launched market-manipulation investigations to uncover whether even greater forces were at play. Meanwhile, there have already been congressional hearings and subpoenas issued to brokers and social media companies.

But for now, individual retail investors continue to have the means to buy into more situations than ever before, while social media allows the masses to communicate in real time. And with the pandemic and social justice movements of the past year altering how people live and think, it may prove to be a recipe for rebellion—or transformation, depending on whether firms go on the offensive. “You can’t rule out that a concerted effort like what we’ve recently seen can happen again to your organization,” says Irv Becker, vice chairman of executive pay and governance at Korn Ferry. Leaders can no longer ignore the market’s effect on everything from dividends to corporate bond ratings to compensation. Most organizations, after all, have long used stock bonuses to reward executives. Rebel investors can now turn this on its head.

Rezendes, just old enough to legally buy alcohol, may have begun trading on a whim, but already he’s cultivating intention and insight, using the lessons of the last few months to change his tactic: “When you get to a certain amount, you’re less inclined to risk it all,” he says. “You’re more comfortable going all-in when you’ve got $300 dollars rather than $5,000.” After hitting big on his Avengers bet, Rezendes lost most of his winnings on other call-option plays. So after the market dip, he started studying positive-theta investing strategies. Today, he rarely purchases call options. “I trade with a plan,” he says.