The Rent Is Due … Eventually

With their multimillion-dollar office leases expiring, corporations have no idea how much space they need.

Ten years ago, the accounting firm was consistently scrambling to find conference rooms and available desks for its 5,000 employees across five floors in a downtown Chicago skyscraper. It signed a 10-year lease to pay nearly $5 million a year for the space, but with everyone in the office all the time and the Lake Michigan views that impressed employees and visitors alike, it seemed worth it.

Fast-forward to 2021, and most employees are working from home. The lease is up and the building’s owner wants the company to sign a new multiyear deal. At some point, hopefully, COVID-19 will recede and some workers will come back—but it won’t be all of them, and certainly not every day. The firm just doesn’t know when that will be or what it will look like. The building owner could conceivably kick the company out, but they aren’t sure they’ll get from a new tenant anywhere near the rent they are getting now.

The pandemic has truly upended the relationship between corporations and the property owners from whom they rent office space. For their part, tenants are unwilling to commit to pricey long-term leases. But landlords aren’t moving to throw them out—yet. “Right now, landlords and tenants are playing a slow-motion game of chicken,” says Robert Mayes, a senior client partner in Korn Ferry’s Real Estate practice. While the federal government has repeatedly stepped in to protect residential dwellers during the pandemic, it has let corporations sort out their own issues. How this standoff resolves has massive implications not only for the $1 trillion market for US office space but also for how people work and even what cities look like.

That it’s still a standoff is an improvement over the nightmare scenario many real estate watchers envisioned. When the economy initially cratered because of lockdowns, industry experts feared that financially strapped tenants might be unable to pay rent, which in turn could squeeze landlords who had their own debts to pay. “In March of last year, no one knew anything,” says Carter Haslam, a first vice president at CBRE, one of the world’s largest full-service commercial real estate firms. But while the pandemic crushed many small retailers and other businesses, areas such as industrial have been better able to face the downturn. In many cases, landlords and tenants found solutions to help weather the storm, Haslam says. At the same time, several court rulings favoring landlords means most rents have been met. 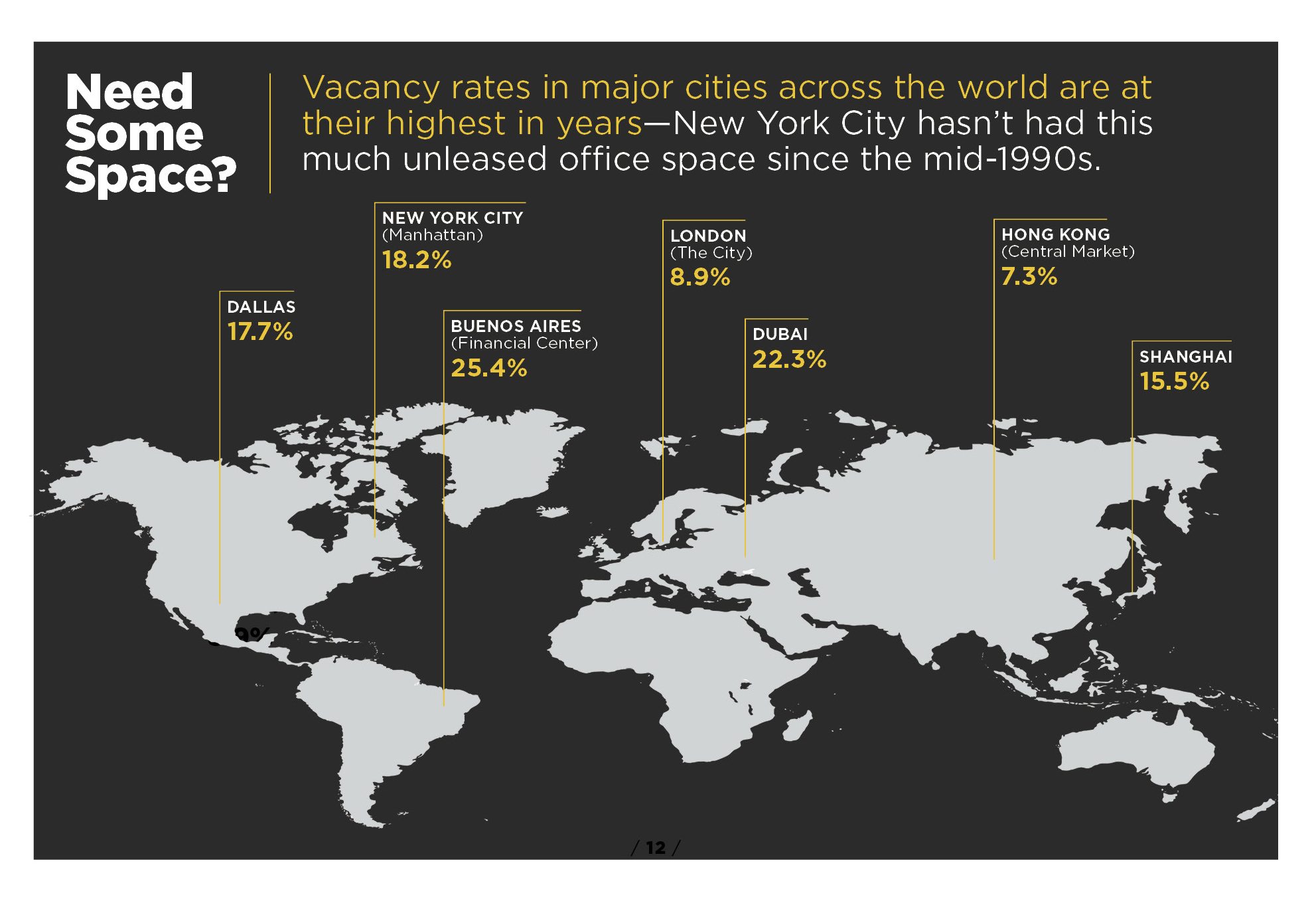 In the world of gleaming skyscrapers and sprawling office parks, property landlords and corporate tenants usually have a solid relationship. But that dynamic is changing. “The office is not dead, but it will have to evolve to meet new challenges and work patterns,” says Elizabeth Norton, senior managing director of Transwestern, a real estate consulting firm.

Not everyone’s lease is coming due, of course, but enough are to cast a growing chill over the market. As of this summer, about 16 percent of office space in the country’s top hubs was vacant and unrented, about the same amount as in the aftermath of the Great Recession. Rents have fallen in many areas, but even so, experts say executives don’t see much point in negotiating a new lease when they have no idea how much space they’ll need. Leaders still aren’t sure when or how many workers will eventually return to the office.

Ultimately, the real estate deadlock is calling upon both sides to face off in a seemingly no-win situation. Creativity is often required at such times, and for now that means many landlords are offering firms the equivalent of month-to-month, a rarity in the corporate real estate world. “No office landlord is going to go month-to-month forever,” Mayes says, “but it works for now.”