When Will Hiring Tail Off?

Despite strong numbers, some experts suggest firms will tap the brakes on hiring. Other changes may not be as easy.

For many firms, the year 2021 may be remembered as the Year of the Scramble. The scramble to fill shelves, to find supplies, to keep cargo ships moving. But the biggest scramble that worried many corporate leaders had nothing to do with products or ships—it was for people. Indeed, facing record shortages of workers, some companies found themselves hiring candidates on the spot, with instant signing bonuses several thousand dollars higher than normal.

But while it didn’t get a lot of attention, something began to change as the late summer months turned into the fall. To a degree that surprised some economists, organizations that were hiring began to make do with fewer workers, at least in the United States. Some companies shifted because they couldn’t find workers with the skill sets they needed. Or they worried about the delta variant’s impact on the economy. Regardless, many experts now suspect that the country’s pandemic-led job boom has peaked.

All of which leaves one big question as a new year starts: What will that mean to the future of hiring? Many experts believe that firms will cut back on fast hiring and fat salary hikes. But they also warn that a lot of worker demands that fell into place during the pandemic—for instance, working remotely—are not likely to change. Firms that think they can go back to the future, so to speak, risk losing the workers they have or having to find more new ones. “Companies and HR executives that try to go back will do so at their own peril,” says Thomas Kochan, a professor at the MIT Sloan School of Management who studies workforce transformations.

Certainly, steady hiring is far from over, but it’s clear that firms are increasingly struggling to find people who would fill their openings. Currently, there are nearly 11 million open roles, but only about 8.4 million people who want a job and don’t currently have one. In Texas, more than three-quarters of businesses surveyed in September by the Federal Reserve Bank of Dallas said a lack of applicants was impeding their ability to hire. Even the government’s own forecasters believe job growth will slow down. Excluding refilling roles that were lost during the pandemic, the number of US jobs is expected to grow 1.7 percent in total from now until 2030, according to the Bureau of Labor Statistics. 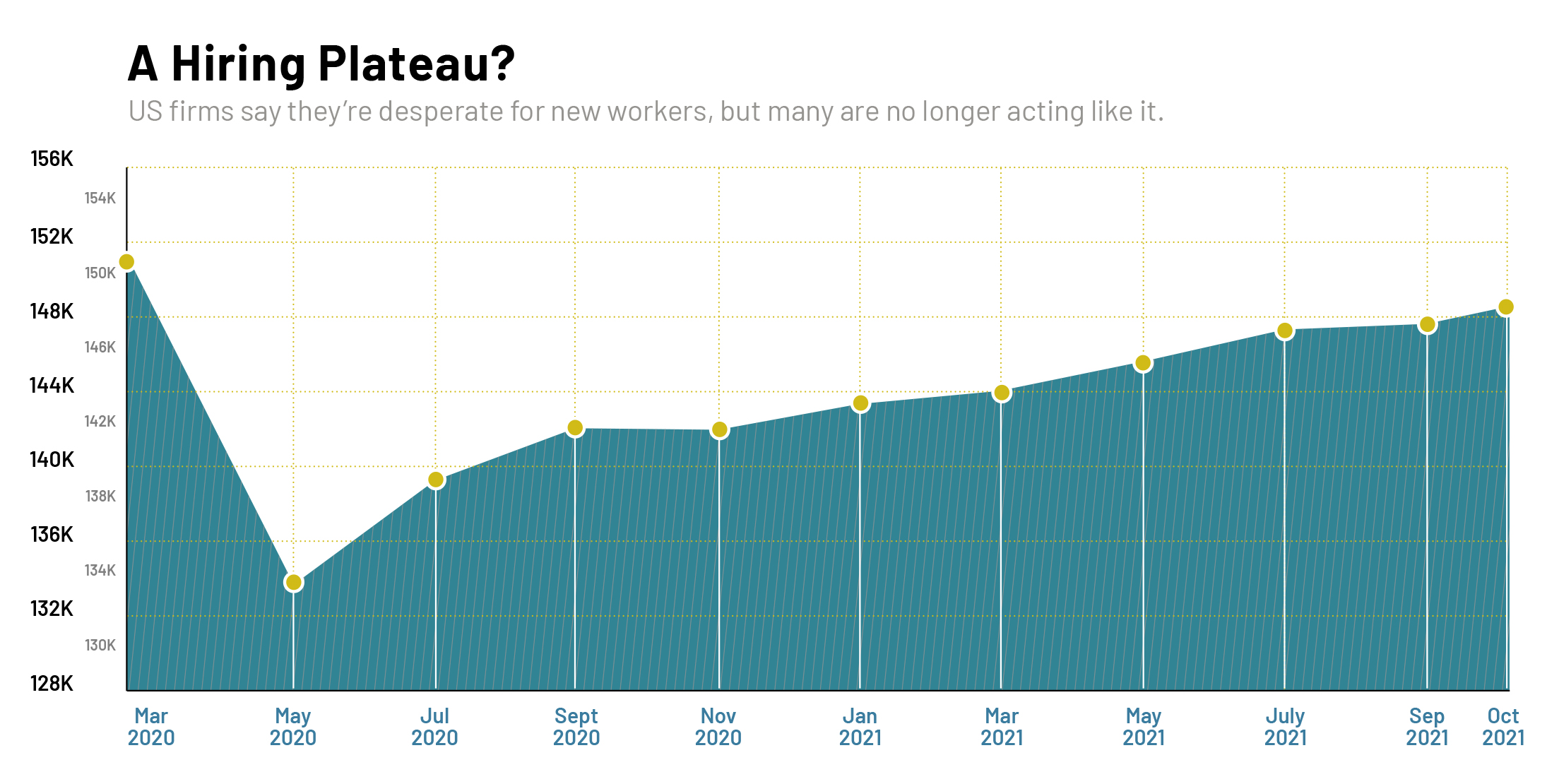 Companies that didn’t blow up their salary budgets now seem pretty savvy. The ones that did now have to contend with a serious pay-equity problem, where new recruits were getting paid, in some cases, 25 to 30 percent more than people who’ve already been doing the same job at that company. There’s very little precedent to suggest that we would return to lower wages, but instead of offering those massive pay bumps, companies may be able to dial them back to 5 percent. “Companies might not have to give away the store to find talent,” says Elise Freedman, a Korn Ferry senior client partner and leader of the firm’s Organizational Strategy and Workforce Transformation practice.

Still, experts say salary offers may be the only area that could go back to “normal.” Employees have spent the last 18 months figuring out that flexibility is something they value, in many cases even more than money. Managers may want to ask everyone to work in the same office at the same time again, but even with a slowing—or, eventually, a receding—job market, many employees will be willing to quit over that. Those workers also want more of a voice at work. They may not accept decisions on health, safety, training, changes to corporate culture, or most anything else unless they are given the opportunity to provide input first. “When you have a sea change, you simply can’t go back to what you had before,” Kochan says.