Covering All the Bases

From competing with Google to guiding an organization through a pandemic, the job of the modern baseball general manager has become as sprawling and complex as any CEO’s. Four of the best run through a role even fans barely know.

As his team arrived in Florida for spring training a year ago last February, Ross Atkins, the general manager of the Toronto Blue Jays, had every reason to be hopeful. He had just signed several prize free-agent players, adding to a team that had gone to the playoffs in 2020. But before spring training even ended, injuries brought down two of his most heralded new stars. That included, as luck would have it, the outfielder who had signed the richest contract in team history.

And then came the real curveball. As in the previous year, pandemic border restrictions meant the Blue Jays would have to play many of their “home” games in a minor-league stadium—in Buffalo. Reasonable people can disagree about the attractions of Buffalo (the New York Times says it’s a city on the rise!); the team never got to find out either way. The city was locked down. “There was no complaining,” says Atkins. “Everybody was focused on one another and the game—on the controllables.” Remarkably, the team stayed in contention throughout the summer, just missing the playoffs after a furious closing burst of wins.

Without a doubt, Atkins was a key contributor to the team’s perseverance in 2021—as much as any one of his players. But how many Blue Jays fans can tell you Atkins’s name, let alone what he actually does? GMs don’t appear on baseball cards, or endorse Frosted Flakes, or compete in the Home Run Derby. Fans know everything about the folks in uniform. The folks behind those folks? Not so much.

What do GMs do? And what can the corporate world learn from baseball challenges that sound strikingly familiar, be it managing a multimillion-dollar budget during a pandemic, processing vast quantities of data, or fighting to keep talent from defecting not merely to other teams but other industries? “GM jobs have changed immensely—as much as any corporate leader’s,” says Jed Hughes, a Korn Ferry vice chairman and the global sector leader for sports. Hughes has been at the forefront of these developments, having helped numerous Major League organizations find new leaders—including four of the best, whom Briefings convened for a series of interviews.

With the season underway, we spoke with the Blue Jays’ Atkins, along with Ben Cherington of the Pittsburgh Pirates, Derek Falvey of the Minnesota Twins, and David Stearns of the Milwaukee Brewers. Here’s an edited version of these conversations.

Briefings: In his 2003 book Moneyball, Michael Lewis writes about the dawning of a new era in baseball. Quantitative analysis was dramatically transforming the way teams evaluated players. How has the role of a general manager changed in the two decades since then?

Cherington (Pirates): There are oceans and oceans of data pouring in—from what’s actually happening in games, from practice environments, from international and amateur player markets. Even from subjective scouting reports, which teams are now treating as data.

Stearns (Brewers): We’re at the point where this is beyond what one person can do on their own.

Falvey (Twins): Because of the number of people we have, you have to act more like a Fortune 500 CEO. There’s so many different areas where if I was trying to navigate every problem, every day, in every space, I’d never be on top of the business.

Briefings: Given the explosive growth of front offices, how does a GM decide what to delegate?

Stearns (Brewers): If I’m doing my job properly, 95 percent of decisions never get to my desk. These could be decisions about playing time that occur throughout our organization. It could be about minor-league free-agent signings. It could be about allocating resources to prepare for a potential off-season pursuit of a free agent.

Cherington (Pirates): Ultimately, we’re in the business of human performance, and that is an extremely complicated and dynamic thing that is rarely linear.

“I think to some extent baseball operations departments have become small tech companies.”

Briefings: Front offices are hiring analysts with PhDs in everything from statistics to machine learning to particle physics. How much competition with other industries is there when you’re hiring new talent?

Falvey (Twins): There have been many people we’ve been competing for with companies like Google, to try to hire as an analyst. And not just analysts. In on-field development, there are coaches in baseball who could potentially work in the NFL or the NBA. We were one of the first teams to hire a female strength coach. She was picked off by Stanford women’s basketball, and now runs their performance and strength and conditioning.

Cherington (Pirates): I think to some extent baseball operations departments have become small tech companies. What data do you want to pursue? How do you take advantage of it? You need people with the skills to make those choices and to convert the data into something that a human being can use to make decisions—whether that’s a player, a scout, a coach, or someone in the front office.

Briefings: In the wider corporate world, the pandemic has provoked mass resignations and shut down supply chains. In baseball, with so many games canceled, the flow of performance-driven data all but dried up. How did you compensate?

Stearns (Brewers): An absence of performance-driven data can be somewhat frightening. It breaks all of your models. It’s not what you had planned for. It caused a tremendous amount of stress around the industry, a lot of work for R&D departments.

Falvey (Twins): Our systems are not built to understand what transpired over the last 12 to 24 months. We need to be able to adapt. Recognize that nothing’s perfect right now; we’re going to have to make some calls. But what you can’t be is fearful. You have to find a way to make the decision and move forward.

Atkins (Blue Jays): Fortunately, all teams are dealing with the same thing. 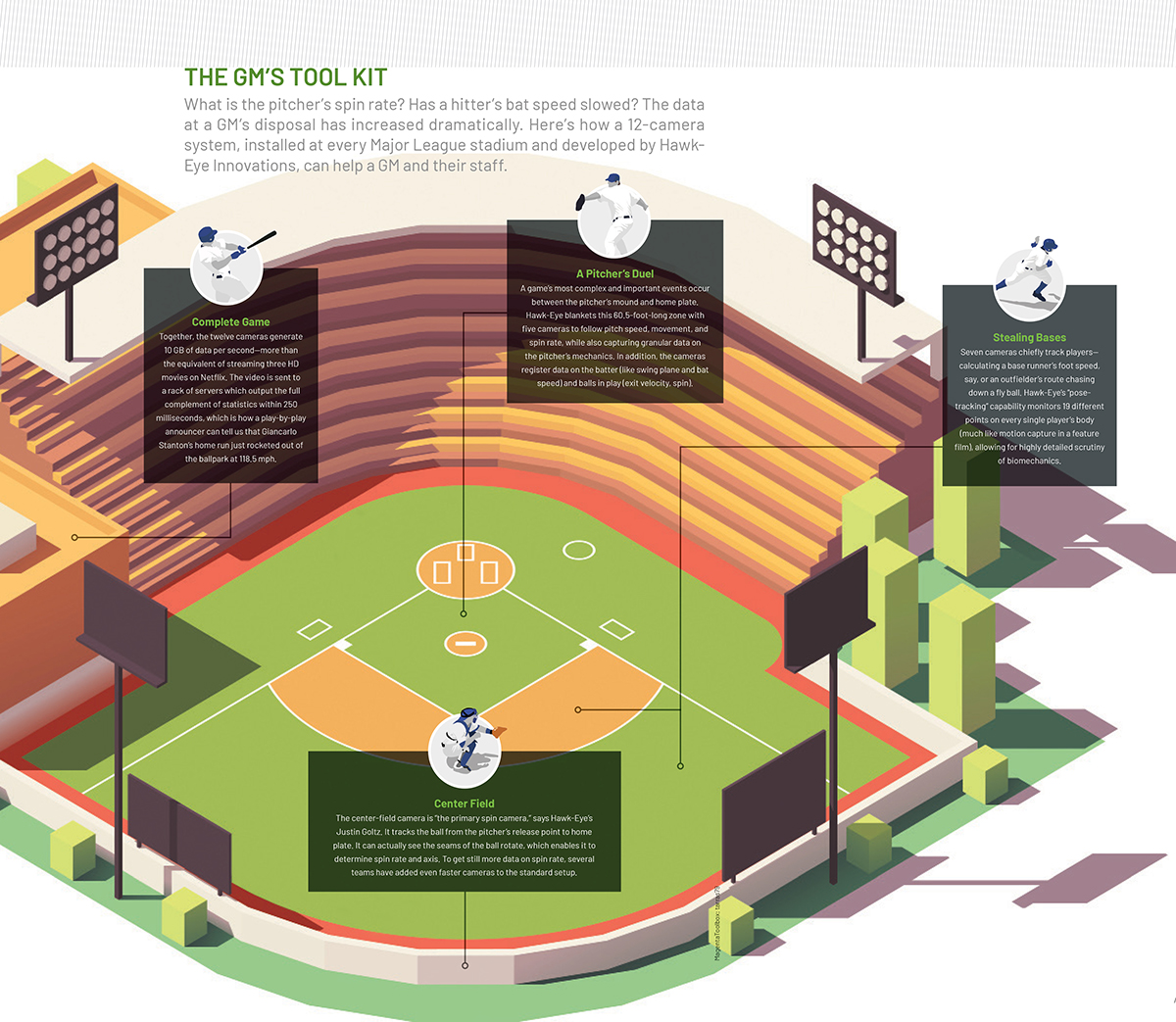 Briefings: The pandemic created mental health issues for people in every sphere of life. What was its effect on baseball?

Stearns (Brewers): We’ve seen anxiety levels rise across our organization, on and off the field. Along with every other team out there, we’ve done our best to provide mental health resources to our players.

Cherington (Pirates): We did see some signal there—not just with players, but with staff. The most important thing is to create an environment where people feel safe to speak up and ask for help. When that happens, we should celebrate that and make sure we give that person the resources they need.

Atkins (Blue Jays): The stress of trying to perform at a high level in itself is already something we’re all cognizant of, that we want to always be thinking about empathetically and proactively. Individuals will always do better in environments where they feel they are cared about.

Briefings: What have been the pandemic’s economic consequences on baseball?

Stearns (Brewers): I think the impact of the pandemic on baseball is commensurate with its impact on live entertainment around the country. We are an organization that relies a lot on in-park revenue, whether that’s ticket sales, parking, or concessions.

Falvey (Twins): Baseball as an industry is set up differently than some other corporations that may be geared toward profit-making each fiscal year. We’re thinking about revenues over a longer time horizon than a 12- to 24-month cycle. This allows us to make decisions that we think are much more focused on winning.

“Ultimately, we’re in the business of human performance, and that is an extremely complicated and dynamic thing.”

Briefings: Historically, GMs have learned the job from the ground up. Today, only a small handful of GMs have played pro ball (among them, Ross Atkins). How important is playing experience for this job?

Stearns (Brewers): I think the biggest misconception about GM jobs in any sports industry is that they’re player-evaluation positions. That’s not what I’m doing. I’m making player selections and determining who is on our roster. I’m doing so based on the evaluations of others who are much more skilled at that particular discipline than I am, and I’m balancing different information sources. Playing the game at a high level can help with evaluation, but it’s not the primary focus of the position anymore.

Falvey (Twins): It’s changed exponentially in the last few years. I just played baseball at the Division III level in college. Increasingly, people that don’t even have that level of baseball background are coming into this space and are capable of leading organizations—both men and women. We’re seeing a massive change in the complexion of our group, and that’s exciting.

Stearns (Brewers): In the last 10, 15, 20 years, we’ve seen a move away from a traditional playing background to backgrounds that more resemble what we’re seeing in C-suites in other industries.

Atkins (Blue Jays): My playing career is part of who I am, but it’s not a big part of how I do my job. I think it’s much more about the entire office, and how the office is built. We are building front offices across the game that are more and more sophisticated, more and more diverse. It really comes down to connecting and relating. You do not have to have played professional baseball to do that.

Briefings: In 2021, the estimated average cost in free agency of a part-time role player—the least valuable variety of player—was $6.4 million per year. Reportedly, 29 of the 30 GMs in baseball earn less. Is it possible that GMs are themselves undervalued?

Stearns (Brewers): I don’t doubt that owners around the industry understand and value the contributions effective executive leadership brings to an organization. We’ve seen a handful of very successful executives who have gone from one team to another, and have managed to bring very consistent winning teams with them. Having said that, I think you should negotiate my next contract.