The massive pay bumps from the Great Resignation may jeopardize company efforts to maintain pay equity.

For years, numerous companies have been trying to close the gap in pay for women and men who perform the same job. The effort, in tandem with threats of lawsuits and public pressure, has taken a long time for many firms.

But just when many organizations are on the brink of solving one pay problem, the so-called Great Resignation that has baffled so many of them may be creating another, potentially even more massive pay issue: the widening gap between the salaries of loyal employees and those of new hires or workers who threaten to quit. In an era of increasing transparency, experts say, coworkers are going to find out one another’s salaries, and the gap could lead to a variety of problems, including threats to quit from once-loyal employees, lawsuits, and a reputation for unfairness. “If there’s an issue with that starting salary, it will only get worse and worse over time,” says Maria Colacurcio, CEO of Syndio, a software firm that helps firms identify and rectify pay gaps.

To some extent, this type of pay issue crops up whenever an economy does well. However, the fact that a record number of people quit or switched jobs last year has many companies stretching salary guidelines to stem the exodus. In the United States alone, wages have jumped almost 6 percent year to year, the highest annual advance in more than two decades. Executives in some industries have seen even higher jumps—salaries doubled, bonuses tripled—either by getting a job elsewhere or receiving a counteroffer from their own firms.

Two years ago, for instance, organizations might have hired engineers at $100,000, but someone being recruited for the same position just two months ago might have gotten $150,000. There was a time when leaders could get away with discreetly doling out offers like these, but experts say those days are gone. The taboo around disclosing one’s pay has pretty much dissipated, particularly among younger workers. At the same time, multiple states and municipalities are requiring firms to list a salary range for open jobs they post. In short order, everyone in an office eventually finds out who’s making what.

Firms worldwide have tamped down the pay gap between men and women who are doing the same job, and in many places that discrepancy is now only about 2 percent. Many organizations have also addressed opportunity gaps—the inability of women or people from diverse backgrounds to rise to top-paying senior roles. The salary surge for new employees threatens to undermine those efforts, and the problem is even more acute with counteroffers. Many companies don’t have consistent, company-wide guidelines around counteroffers, leaving them to the discretion of hiring managers. Those hiring managers might, however unconsciously, be doling out great counters to people who look and act a certain way. “It only takes a couple of blips to disrupt the pay equity,” says Tom McMullen, the leader in Korn Ferry’s North America Total Rewards expertise group.

Pay gaps of all sorts are becoming a key concern not only to employees but also to investors and governments. Worldwide, more than half of consumers say CEOs need to make pay equity a higher priority, according to a 2021 survey by the communications firm Edelman. And in February of this year, a UK tribunal ordered an investment bank to conduct an extensive audit of its London staff to determine whether men were being paid more than women for the same job.

Some experts say a potential solution involves giving onetime bonuses to loyal employees rather than raising salaries outright. Others say firms should consider reviewing salaries more often than the traditional once a year—to provide more hope and motivation for those on the low side of the gap. The best way forward, McMullen says, is to create more robust principles around compensation management, such as hiring guidelines, promotions, hiring and retention bonuses, and counteroffers. “Run the railroad a little more effectively,” he says. 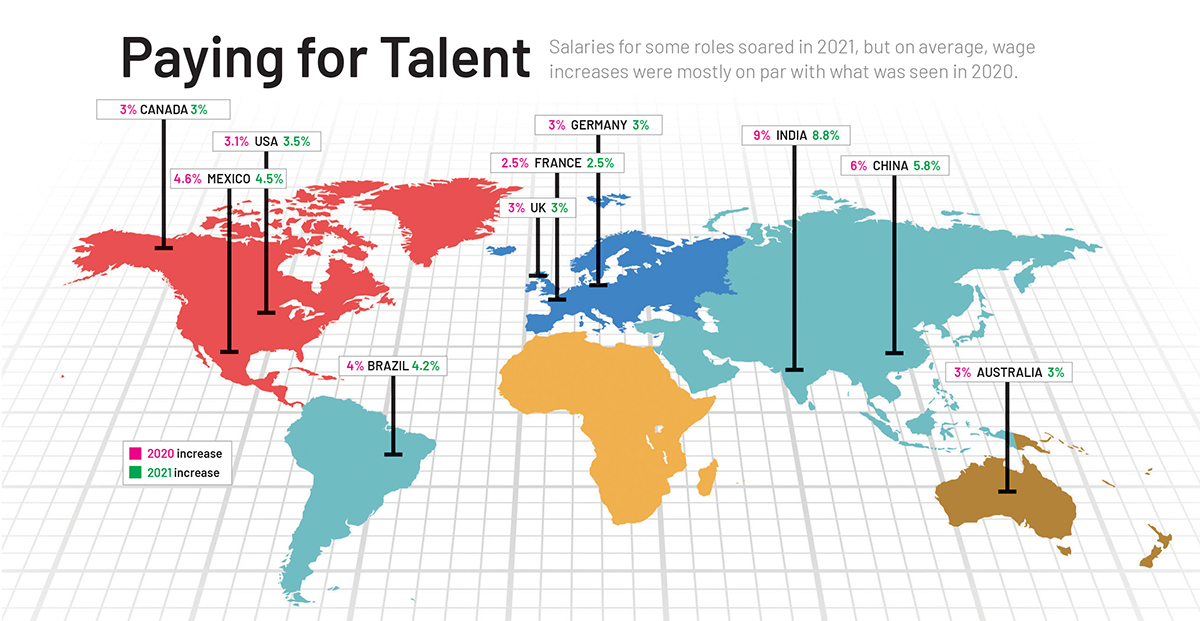