Why African American talent is opting out

A disturbing number of high-potential African Americans are leaving the corporate world. Can companies get them back?

Micae Brown seemed to be on her way to greater things. As the national business development manager for a major city newspaper, she conceptualized and hosted a video series called “Minority Report” that showcased the city’s entrepreneurs and leaders of color. In short order, the five-minute video series became one of the two most watched for the daily paper, generating not only clicks but also much–needed advertising and sponsorship revenue.

So, two years into the project, she decided to pitch her managers and executives at the paper on a more expansive production. The response? They passed, citing a variety of expense issues. Frustrated, she left. “It was clear that I wasn’t going to grow and develop there,” says Brown.

But her story had only started. Inspired by the rise of the gig economy, Brown put together a bunch of side freelance hustles and turned them into her main hustle. She relaunched her series under a new name, “The Micae Brown Report,” began hosting an urban business roundtable talk show on a local radio station, and set up a sales agency. “I got one contracting assignment and then another, and then I was project managing,” says Brown. “And now I’ve been on my own for almost four years.”

At a time when the demand for diverse and inclusive leadership teams is greater than ever, a trend is emerging among high-potential African American leadership talent, who are choosing to opt out of corporate life for independent careers. Lack of representation in the C-suite and boardroom, conscious and unconscious biases, and lack of career support are increasing the risk among organizations that are recruiting and retaining future African American executives and leaders.

“If you were to ask an organization how many of their top African American leaders are thinking about leaving, the answer would likely be more than they realize,” says William F. Busch III, an associate client partner at Korn Ferry who specializes in organizational strategy and transformation.

For their part, businesses know full well the trend is both highly unfortunate and highly unprofitable. Numerous studies show that a diverse and inclusive leadership team and labor force can mean everything from raising customer bases to greater innovations. And that, according to those studies, can improve financial performance by as much as 30%.

But the question remains the same: How can corporations create and engage a more diverse and inclusive work team? “The pressure is on for organizations to create cultures that make African American talent feel like the traditional corporate path is a compelling option to fulfill their leadership potential—before they opt out,” says Busch.

“If you were to ask an organization how many of their top African American leaders are thinking about leaving, the answer would likely be more than they realize.”

For all the progress organizations have made to advance African American talent—which is indeed significant—many of the barriers that exist today existed 10, 20, even 30 years ago. It’s no secret that discrimination and unconscious biases have been and will continue to be factors standing in the way of advancing African Americans into leadership positions. Not unlike in the past, African American workers today cite the lack of role models, mentors, and sponsors within and outside their organization as a significant barrier to reaching top leadership positions. Further, hierarchical structures and unclear training and development opportunities often leave them feeling trapped and as if job performance doesn’t matter.

Jamal Jackson, a Chicago lawyer, for example, says he knew upon entering college that he wanted to practice corporate law. He interned at law firms throughout college and eventually graduated with a combined MBA/JD in 2012. But his limited experiences were enough for him to realize that he didn’t want to work in a big-name firm.

“If you are a new associate at a large firm, they put you behind a desk,” says Jackson. “There is little client interaction, and you don’t control the mechanics of the relationship. The expectation is that you sit back and observe and play the game, and at some point in the future you will have your time.”

More African Americans are getting advanced degrees and entering the workforce in larger numbers than ever before. But that isn’t resulting in larger representation in leadership positions. 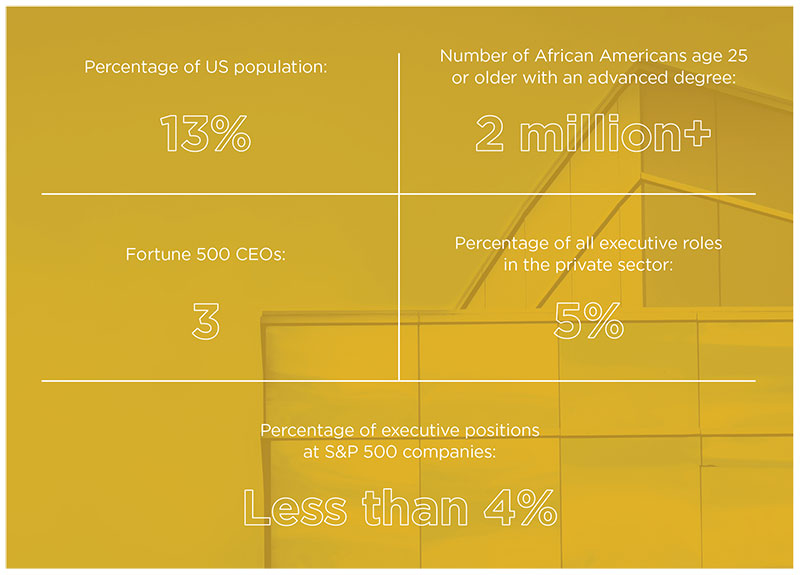 For Jackson, that didn’t fly. After watching his mother, who passed away at age 44, work jobs she didn’t want for most of her life, he wasn’t about to do the same. He started his own firm, Jackson Corporate Law, in August 2013, advising firms from start-ups to organizations with up to $50 million in revenue on tax issues, mergers and acquisitions, commercial litigation, intellectual property, and more.

Jackson’s view of corporate life is not uncommon among the younger generation of African American talent, who feel traditional career routes are not only no longer stable but also a direct contradiction to their ethos of wanting purpose and inspiration from their work. Moreover, while older generations of African American talent may have felt they had fewer options, in today’s start-up and digital-enabled entrepreneur environment, more options are available to younger talent to advance their career goals without sacrificing their cultural identity.

“It is taken for granted sometimes how hard it is to connect and assimilate into the work culture.”

“To this newer generation of African American talent, going corporate means giving a larger entity control over their experiences, salaries, and advancement,” says Andrés Tapia, a Korn Ferry senior client partner who is a diversity and inclusion strategist. “The more engaging thing for them to do is to leverage their knowledge, experience, capital, and relationships to create their own businesses.”

Chasity Williams is doing just that. After 13 years in the corporate world working in tech leadership positions for Xerox, Microsoft, and others, Williams recently enrolled in the executive MBA program at Northwestern University’s Kellogg School of Management. But she isn’t planning on going back after getting her degree. Instead, she’s already laying the groundwork to launch a start-up.

While Williams concedes the move is risky, she says it’s the right one for her. To illustrate her point, she compares enterprise software to consumer tech, saying the former category is all about minimizing risk while the latter embraces change and innovation. “I had to ask myself, do I really want to continue to target corporate executive leadership positions? Or should I leverage my skills to drive innovation through entrepreneurship?” Williams says, referring to her career in enterprise software.

Global markets played a role in Williams’s decision as well. “Just as corporations take advantage of market conditions to thrive, people should, too. The gig economy, work-life integration, the rise in cultural consciousness, and the fact that we live in a more connected global society has brought about a transition in the way we look at working for organizations, entrepreneurship, wealth creation, and the value of how we spend our time,” says Williams.

The common thread running through the experiences of Brown, Jackson, and Williams— and many others—is that they all began their careers in professional firms or corporations. It was the organizations that lost them along the way. “Many African American professionals are losing faith that the corporate sector values them,” says Jesse Tyson, president and CEO of the National Black MBA Association, which has about 14,000 members split evenly between students getting MBA degrees and working professionals who already have them. “Lately we are seeing a growing trend toward entrepreneurship over corporate life, which could enhance the attention on those who continue to pursue corporate careers.”

Based on our survey and interviews, here are some reasons why African Americans with high potential opt out of corporate life:

Discrimination still exists and is standing in the way of advancing African Americans into leadership positions.

Lack of mentors and sponsors

A frequent point of emphasis among high-potential African American talent is that there aren’t a lot of people they can identify with in leadership roles.

Companies typically don’t provide tools to integrate into the work culture and connect with leadership to advance career goals.

Performance measures are too subjective; promotions are generally based on whom you know rather than outcomes. For those in the minority, this is particularly exclusionary.

Building a pipeline of African American leadership talent isn’t just about getting them in the door, it’s about keeping them engaged and motivated once they are inside, experts say. Korn Ferry’s Busch says organizations still need help creating deeper, more sustainable connections to their diversity and inclusion efforts so that African American talent feel more inspired, empowered, and supported to create value in their current work environments. One way to do that, he says, is through formal mentorship and sponsorship programs. The benefits of mentors and sponsors to diverse talent are well documented, from championing them for open positions to helping them understand the unspoken rules of the organization. Individualized development programs that identify and apply the unique skills and perspectives of diverse talent have also been shown to aid retention efforts.

But the most important thing organizations can do, says Busch, is to develop a culture of purpose and “actionable inclusion” that focuses on creating positive emotional experiences for both employees and customers—which in turn will lead to better engagement, financial performance, and growth. “It is taken for granted sometimes how hard it is to connect and assimilate into the work culture,” says Busch. “Think about the fact that most white mid-level managers share more commonalities with an organization’s senior leaders than its black senior executives do.”