More countries are ramping up aerospace and defense systems—and asking outside firms to find and train local experts. Korn Ferry’s take on a critical talent challenge.

Based on its design sketches, the so-called Hunter-class frigates that the Royal Australian Navy plans to deploy will be an awe-inspiring anti-submarine fighter.

Spanning almost 500 feet—roughly one-and-a-half football fields—with a range of some 7,000 nautical miles, the ship comes equipped with an anti-missile defense system, advanced gunnery, and enough space to carry two wartime helicopters. Indeed, with the ship’s state-of-the-art equipment, the Australian government, which ordered nine of them at a cost of $35 billion, sees it as a cornerstone of the country’s defense plan—or as Prime Minister Malcolm Turnbull puts it, to make Australia “truly sovereign.”

Now comes the hard part: building the ship. Construction isn’t expected to begin until 2020, and the first ship won’t hit the water until at least 2027. Part of the delay is because Australia wants BAE, the giant British firm that designed the Hunter, to help recruit and train about 5,000 highly skilled workers in everything from hull construction to the maintaining of the digital infrastructure of its missile systems. To be sure, job creation was a key part of the deal.

Modern warfare has certainly changed in the 21st century. It’s no longer just the superpowers like the United States and China that are bulking up their defense and aerospace systems; countries from Poland to Saudi Arabia are becoming big customers of firms like Lockheed Martin, Raytheon, Boeing, Northrop Grumman, and Spirit AeroSystems. But this multibillion effort comes with a new challenge: Instead of outsourcing the work to these firms, those countries want to largely build and run these massive jetliners and war machines themselves.

“Jobs development and training is a huge part of any sale,” says Jon Barney, a senior client partner with Korn Ferry’s Industrials practice who specializes in aerospace and defense and has worked with both firms and countries on training local talent. “Countries want to develop their economies, train their people, and develop export businesses as part of their return on investment.”

Non-super powers have gotten into the aerospace and defense game in a bigger way as global security issues have risen, creating new opportunities for organizations to methodically expand into international markets. Their presence in markets such as Eastern Europe, Australia, Asia-Pacific, and the Middle East coincides with a conscious push in those countries to address a looming, and possibly economically devastating, skills shortage—not only in this field but others. Indeed, a recent Korn Ferry report estimates the world will be short 85 million people of enough skilled labor by 2030. In the APAC and EMEA regions alone, where much of aerospace and defense company growth stems, the talent shortage is expected to total 61 million people and $6.1 trillion in unrealized revenue.

For the Defense: A Growth Market

Global growth and complexity continue in the aerospace and defense sector. For its new F-35 Lightning II model alone, Lockheed Martin has shipped more than 300 at a total cost of more than $30 billion. Some examples outside the US: 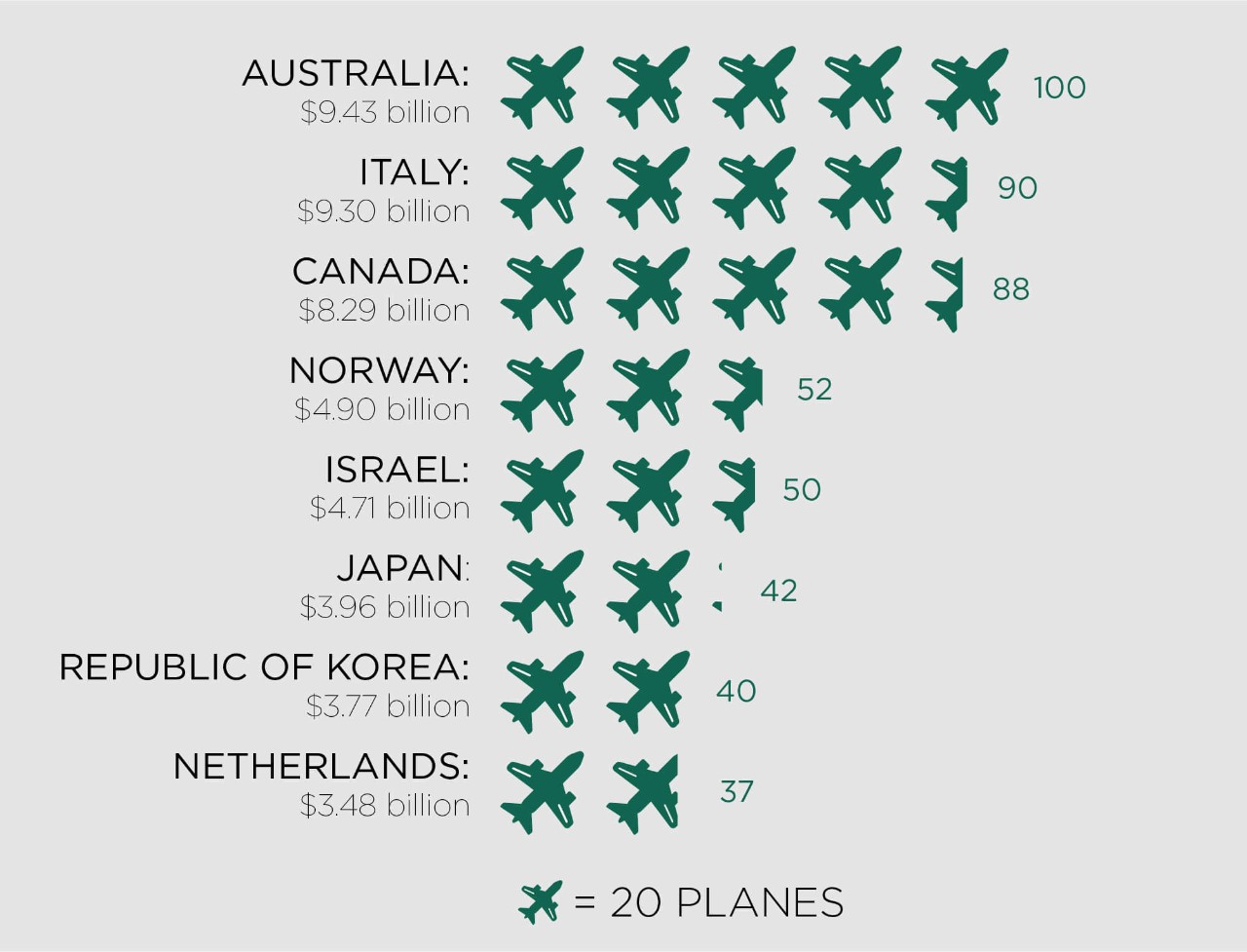 As a result, governments around the world are focusing on job creation and reskilling workers in a bid to diversify and grow their local economies. “There is a new war for talent in the defense sector in Australia,” says Gabby Costigan, the CEO of BAE Australia.

Terms of the BAE deal, for instance, call for ASC Shipbuilding, which is owned by the Australian government, to become a subsidiary of BAE during the construction phase of the program and then revert back to government ownership once it is complete. This will ensure the deal pays dividends for Australia beyond the delivery of the ships to include creating jobs and training workers for a self-sustainable shipbuilding industry, supporting new industries along the supply chain, and boosting the nation’s manufacturing sector overall.

That’s the theory at least. But such agreements have a checkered history, often devolving into ineffective side projects with no real value creation. “Companies did what they were told, didn’t worry as much about performance, and countries didn’t really measure success,” Barney says.

For aerospace and defense organizations—which are already dealing with new competitors, changing demographics, consolidation, and issues driving innovation—the new international talent wrinkle poses a major challenge since it hasn’t been a core competency. “We face a major digital transformation challenge as we bring together BAE and ASC capabilities around design, project management, and engineering,” says Costigan, who cites the industry’s general lack of pipeline planning for talent and succession as another factor contributing to the recruiting conundrum.

Historically, setting up an office or a factory in an international market involved little more than deploying a team from the home office. But that won’t cut it anymore. Nor can aerospace and defense companies solely rely on expats to staff their overseas operations. The importance of international growth—which, in a survey by Korn Ferry, aerospace and defense industry executives ranked second behind core domestic markets as the largest expected source for revenue generation this year—coupled with the local jobs push, is creating a talent strategy issue for organizations.

“The talent supply in home locations is a lot thinner than ever before; new generations don’t necessarily want to work in factories anymore when they have other options,” says Samantha Marnick, executive vice president and chief administration officer at Spirit AeroSystems. “At the same time, having a worldwide customer base means doing work in places you weren’t thinking of doing work in before, so the available labor supply is an important consideration.”

The sale price was important, but the more important piece to the Polish government was job creation.

Marnick’s talent concerns, which are driven by the strong global demand Spirit is seeing for commercial aircraft orders, are shared by a majority of aerospace and defense executives. Our survey of more than 100 industry leaders, for example, found that 66% of respondents expect retaining top talent to be more challenging, while 56% said they expect their need to recruit talent to increase in the next year. According to Jeff Kohler, a former Air Force lieutenant general, head of the Defense Security Cooperation Agency (DSCA), and Boeing senior executive, most foreign countries’ aerospace and defense companies are state-run and “way behind” in operations and management. “Training is a huge learning curve that could potentially add a lot of costs for firms.”

As a result, many of the firms are taking the whole process one step further—in some cases creating partnerships with overseas firms, and in others growing organically at their own global sites. According to Marnick, as well as adding jobs in the US, Spirit is building a new research and development facility in Scotland and expanding its Malaysian site, so the company can expand its reach for talent in those countries as its business grows in those regions. “The availability of talent is now an even more important factor in deciding where we do work,” says Marnick. “To grow in a particular area, you often need the best skill sets from that region on the ground to develop the piece of business you want to develop.”

By way of comparison, other companies that are implementing strategies to grow their international business may take a “hub and spoke” approach to developing overseas talent, which comprises regional offices staffed with executives from the parent company and local offices in key countries with in-country management and staff reporting to them. Included among the factors that go into its local talent calculation are having “centralized or decentralized management, the cost difference in hiring and training locals versus expats, how new business will be developed, skill sets needed, labor and tax laws, and the level of integration,” says Nigel Sutton, vice president international, Northrop Grumman Innovative Systems, Defense Systems Group.

If this year’s Farnborough International Airshow is any barometer, the pace of international deals is only going to accelerate. Lockheed Martin won a $31 million deal to build a new spaceport in the United Kingdom, for instance, and Boeing and Airbus announced more than $100 billion in new commercial plane orders from buyers in Asia, the Middle East, and North America. Aviation analysts estimate that upwards of 80% of US commercial aerospace is exported. Deals like these cut across products and services ranging from aircraft to maintenance and repair, intellectual property, and cybersecurity.

But fewer deals will happen, Barney warns, if countries become frustrated that their local jobs aren’t being created and skill sets are not improving. For example, as part of Saudi Arabia’s Vision 2030 plan—an ambitious initiative to develop the kingdom’s economy and global standing—the country is aiming for local talent to account for 50% of its aerospace and defense workforce by that time. India, the United Arab Emirates, Poland, and other nations are all pursuing, formally or informally, similar measures.

Indeed, in March, after months of negotiations, the Polish government agreed to a deal with the US government to buy the Patriot integrated air and missile defense system from Raytheon for $6 billion. The agreement marked the largest-ever arms procurement deal in Poland’s history. But according to Tom Vecchiolla, currently an advisor to the Boston Consulting Group and the former president of Raytheon International, negotiations dragged on not over price but over technology transfer and the resulting jobs. “The sale price was important, but the more important piece to the Polish government was creating and sustaining high-technology jobs,” he says.

As competition and project sizes only increase, Barney sees a need to develop metrics to prove that very creation. “Ultimately, the gap between country expectations and company investment in international growth boils down to strategic human issues,” says Barney.