The Global Pay Gap Is Growing

From the Middle East to Asia, gaps in pay between entry-level workers and senior executives are quietly widening.

Not a day goes by without the phrase “income inequality” turning up in America. Presidential candidates lament the pay difference between entry-level jobs and senior executives. Employee activists fight to reduce it. And economists report how much it is growing.

But a fact lost in the debate is that pay gaps aren’t just an American issue. Indeed, more than three-quarters of the world has seen the difference in pay between entry-level workers and senior management increase since 2008, according to a new Korn Ferry analysis. “There’s not much of a shortage of people who can do low-skilled jobs. But at the professional/managerial levels, there’s a huge shortage of people with the right skills,” says Ben Frost, Korn Ferry’s global general manager for pay.

According to the analysis, the pay gap in the United States expanded by 12.2% between 2008 and 2017, the biggest increase among the G7 countries. The United Kingdom, Canada, Japan, and Germany also saw their gaps increase, while the gaps decreased in France and Italy. 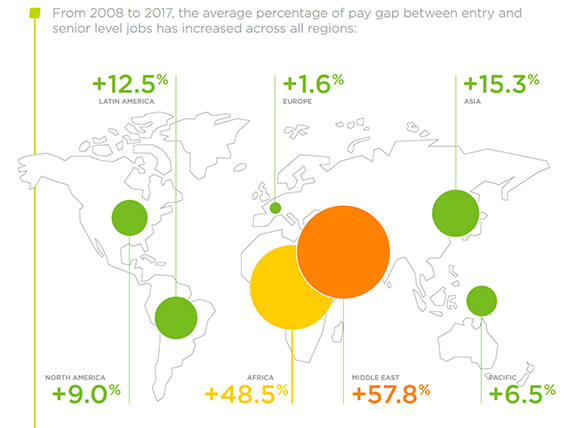 Plus, the gaps show no sign of closing. Lower-skilled jobs once done by hundreds of people can now be done with far fewer, or zero, thanks to technology and automation. That has kept a lid on wage gains for many lower-level jobs. Automation, meanwhile, hasn’t made as many inroads at the senior levels. If anything, it has increased the demand for managers who can interpret and use the data that the latest technological advances produce.

Elsewhere in the world, the gaps grew significantly. For example, in the Middle East, the gap between entry-level wages and executive pay grew 58%, with Bahrain’s gap more than doubling over the time frame. Africa’s gap collectively grew 48.5%, while Asia’s gap collectively grew 15.3%. All the data was drawn from Korn Ferry’s pay database, which contains information on more than 20 million job holders in 25,000 organizations across more than 130 countries.

Experts say the widening gaps outside the United States are due to a changing compensation dynamic. Entry-level jobs are still paid according to the factors going on inside each country. But over the last decade, there has become a de facto international standard for skilled senior-level jobs. “Roughly speaking, a $200,000 job pays $200,000,” Frost says.

While the pay gap is more of a supply-demand issue than a matter of unfair pay practices, it still can cause major challenges for corporate leaders. Following the Great Recession and its aftermath, more people around the world are upset at seeing that rising pay in the C-suite. One answer, say experts, is for company leaders to be more transparent about why and how roles in the organization are compensated. If they reveal the skills needed for certain roles, experts say, workers can have a better sense of the method behind why some jobs are paid more than others.

At the same time, firms need to allow employees to move from those lower-paying jobs into higher-skilled, higher-paying roles. Helping employees develop the hard and soft skills they—and the organization—need will help workers feel more engaged (and potentially save the firm money by filling more senior roles from within).

Those actions may not necessarily close a pay gap, but a lot of its potential impact, at least at the company level, can be reduced, Frost says.