Profit vs Purpose: The Duel Begins

In surprising fashion, Wall Street is telling companies to take the long view and support social causes. Will activists and investors fight back if profits fall?

Kurt Graves had just heard from multiple investors in Intarcia Therapeutics, the pharmaceutical firm he runs, asking him a single question: Why wasn’t he putting Intarcia up for sale?

Intarcia is one of those “unicorns,” a firm with a multi-billion-dollar valuation. Its big product is a pushpin-sized pump that, when placed under a patient’s skin, will deliver medicine without trouble for a year. It’s a potential life changer for diabetes patients, many of whom have trouble keeping up with all the injections and pills to keep their disease at bay.

But the treatment, while succeeding in many clinical trials, was still facing months of regulatory review. Selling now, or taking the company public, the investors argued, would let the owners earn some quick short-term profits. 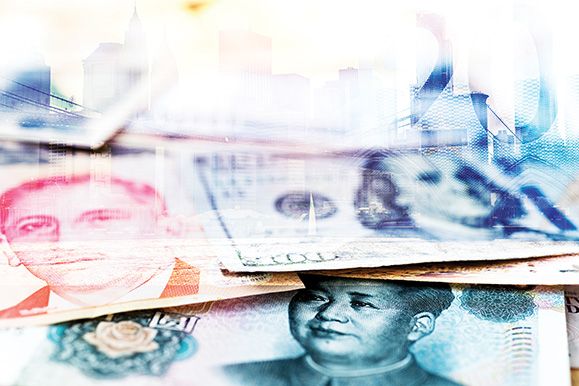 Graves was having none of it. Intarcia, he says, has a higher priority—and purpose—than just making money. “We’re out to create disruptive medicines, new ways of treating chronic diseases that will dramatically improve people’s lives,” he says. Taking the short-term route would be doing a disservice to all the potential patients who could benefit from the treatment and other Intarcia therapies.

Only by coincidence soon after that episode, he read a letter from BlackRock, one of Wall Street’s biggest investors, addressed to the CEOs of all the companies in which the asset manager holds stakes. “Companies must benefit all of their stakeholders, including shareholders, employees, customers and the communities in which they operate,” the letter stated. “Without a sense of purpose, no company, either public or private, can achieve its full potential.”

Graves could only smile and agree at one other sentence: “Purpose, profits and social impact can coexist.”

From the power days of corporate raiding to today’s hedge-fund activism, there has been immense pressure on corporate leaders to make delivering profits the only priority. “Maximizing shareholder value” is the mantra drilled into MBA candidates worldwide; everything else is secondary. There’s no question that the attitude has helped investors—just look at what stocks have done since the 1980s. But critics contend that it has put CEOs under incredible pressure to deliver consistently improving financial results at nearly all other cost. Sometimes that has meant laying people off or forgoing long-term projects. In the worst cases, it has led leaders to condone less-than-exemplary behavior by their employees just to make money in the short term.

But the dynamics appear to be changing. An increasing number of leaders, particularly younger ones, are saying that their organizations are in the business of saving the environment, improving people’s lives, serving their community or some other higher-minded purpose. Making their shareholders money is still critical, but shareholders are just one of many constituencies to serve, and not the most important one.

Even more surprisingly, some of Wall Street’s biggest are going along with that idea. BlackRock may be the biggest asset manager to say purpose matters, but it is by no means the first. Investment groups controlling $114 billion, according to one study, already are telling leaders they should let purpose, not profits, be the driving force in their businesses. And if that means trading some profitability for happier employees, more satisfied customers or cleaner communities, so be it. “There’s been a tipping point among investors,” says Virginia Harper Ho, a professor at the University of Kansas who researches the issue. “Businesses can be profitable and do good at the same time.”

Taking the foot off the profit pedal is a theory that has many names: enlightened shareholder value; conscious business; purpose-driven firms. It’s an idea that has been mandated in the United Kingdom for more than a decade. Whatever it’s called, the premise is simple: running an organization where generating profits is not the No. 1 priority. And there’s a growing body of research that says these purpose-driven firms wind up being more profitable for their investors than those whose primary focus is profits. 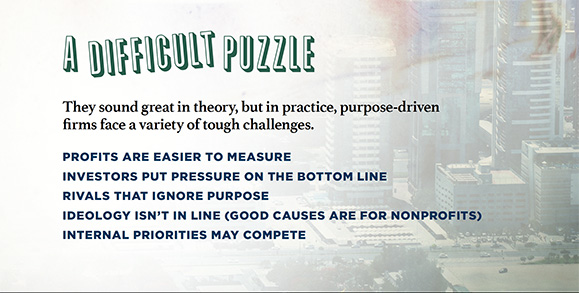 But theories and causes have a tendency to get tossed when stock prices or profits aren’t quite as rosy as they have been lately. Indeed, many say the profits vs. purpose duel hasn’t really been tested, but almost assuredly will be when markets tip the wrong way. Cynics say it is a simply a fad, a marketing gimmick. But adherents are continuing to push the long view, arguing purpose can boost profits. “Purpose isn’t just a nice thing, it’s the source of value creation,” says Kevin Cashman, a Korn Ferry senior partner. 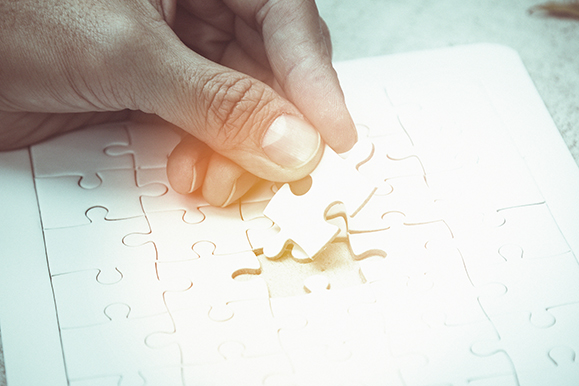 This isn’t the first-time corporations have taken a flier on purpose. Back in the 1970s, many firms started trumpeting social causes. But it was an odd fit. Beverage makers encouraged drinkers to recycle bottles. Cereal firms embraced nature by selling granola. Even coal-consuming electric companies said they were helping the environment by installing new cooling towers. In the 1980s and 1990s, companies began addressing issues that its customers cared about. Many clothing manufacturers committed to better labor practices after the public saw that much of the clothing they were buying was made in Asian sweatshops. Some countries even codified the idea that firms need to look out for other stakeholders. The UK changed its security laws in 2006. Now directors of any publicly listed company have to explain how their company’s actions will impact its employees, customers, suppliers and the environment.

But while many companies embraced a cause, very few let a purpose other than profits drive their business. Many leaders subscribed to the philosophy expressed best by famed economist Milton Friedman: The social responsibility of businesses is to increase their profits.

Choosing profits over purpose is also easy because it’s very easy to measure profits. There are dozens of easy-to-track concepts, including cash flow from operations, gross income and return on invested capital. And those are the metrics that tend to determine leaders’ rewards. There aren’t many cash bonuses for improving employee satisfaction or lowering a firm’s carbon footprint. “If you say your firm’s purpose is to improve people’s environment but have no rewards for actually improving the environment, then improving the environment isn’t your company’s purpose,” says Andrew Hoffman, a professor at the University of Michigan who studies sustainable companies.

That’s why real purpose-driven firms that made a lot of money over the past 40 years stand out. Starbucks wasn’t in the business of serving coffee, it was in the business of serving people, and coffee was just the means, says Howard Behar, who ran Starbucks’ global operations for a decade. Behar and other company executives believed that if they treated their own people nicely, they in turn would treat customers nicely. “Shareholders were always asking, ‘Why are you giving healthcare to part-time workers? They don’t need it,’ ” Behar tells us. Indeed, during Behar’s tenure, Starbucks’ annual employee healthcare expenses often cost nearly as much as the coffee. “It wasn’t the point whether they needed it or not. We felt it was right to have it.” Behar served on the board of the company for 12 years; the decision to provide healthcare never came up. “It wasn’t that we didn’t talk about costs, but that issue never came up because it was non-negotiable,” Behar says.

There will always be a conflict between shareholders and companies whose purpose puts other groups first, Behar says. That, however, appears to be shifting in many circles. Indeed, many big investing firms (but not all) are not only saying they want companies to have a higher purpose, they’re demanding it. There’s an increasing demand for more products—and companies—that support sectors such as clean energy, education and healthcare, according to the investment bank UBS. The number of so-called “impact” investing products has grown from 31 in 2004 to 420 in 2016.

Even investors that are not known for social activism are saying companies need to have a purpose beyond making money. In its letter to the companies it invests in, BlackRock, which manages more than $5 trillion in assets worldwide, said it expects company directors to be able to express how their firm intends to grow profits and benefit the community over the long term. “To prosper over time, every company must not only deliver financial performance, but also show how it makes a positive contribution to society,” the letter stated.

But the biggest boost for purpose-driven firms may be growing evidence of the power of the almighty dollar. What started as a series of working papers in academia in the early 2000s has turned into a body of research showing that purpose and profit not only peacefully coexist, but that purpose can drive profit. A Korn Ferry study found that while purpose-driven consumer-products firms grew their sales at a 9.9 percent annual clip from 2011 to 2015, their peers averaged only a 2.4 percent growth rate. The stocks of purpose-driven firms that also have management teams that have a clear view of where they want to go and how to get there routinely outperform rival firms, says Claudine Gartenberg, a professor at the University of Pennsylvania’s Wharton School. "I believe that the folks on the side of purpose yielding profits are right," adds Kate Shattuck, co-founder and co-leader of Korn Ferry's Impact Investing Center of Expertise. "When you unlock the power of purpose, a company and it’s leadership are unleashing unlimited potential of their people." 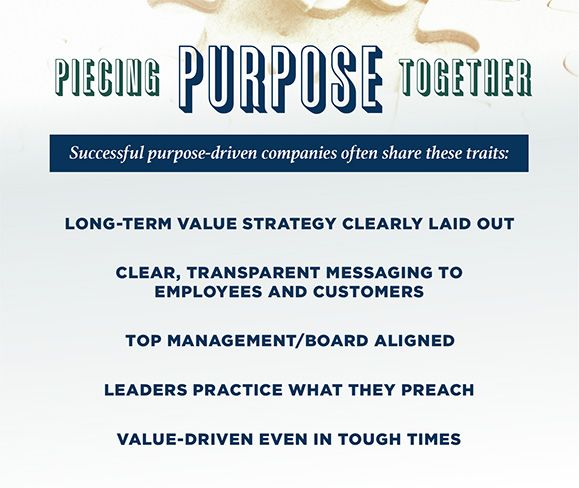 In another study—this one by Harvard University professor Michael Porter and senior fellow Mark Kramer—purpose-driven firms that prioritize a long-term approach over short-term profitability have been shown to have higher brand loyalty, employee retention rates, better resource allocation and an overall competitive advantage. “Shared value is not social responsibility, philanthropy or even sustainability, but a new way to achieve economic success,” the co-authors reported in the study, “Creating Shared Value.”

Profits are still at the forefront for the majority of leaders. They’re easy to find and report, and they’re still what many shareholders will measure a management team’s performance by. But there’s more of an acceptance of firms like Kind, which makes nutrition bars. It was started by Daniel Lubetzky in 2004 with the idea that everyone should be, well, kind. The nutrition bars, made with nuts, fruit and honey, were a way to be kind to one’s body. That purpose imbues everything else the firm does, including giving away $10,000 each month to causes that promote well-being, and letting employees reward a colleague when they see that person perform an act of kindness. Kind sold $1 million worth of bars in the first year. Its annual sales are more than $700 million now.

As for Graves at Intarcia, he’s convinced his antsy shareholders to stick around. It isn’t that he doesn’t care about profits. “They’re absolutely vital,” he says. But he believes that his organization has a higher priority. “The leader of an entity absolutely has to create shareholder value, but I believe the best leaders are those who are driven by a core passion and purpose to do something really good in the world.”