The number of jobs you may have in your lifetime will likely be double that of a generation ago. How workers and companies should deal with this new reality.

These days, you can find Mary Anne Fusco showing luxury condominiums to aspiring buyers up and down Manhattan. She’s quite good at it, too, having brokered more than $500 million worth of sales.

She’s so successful at it you’d think Fusco has been hawking New York real estate her whole life. But this is actually her fifth different career. Among other roles, she has overseen 13 Jenny Craig weight-loss franchises across Atlanta; owned and managed a construction and renovation company; sold women’s sportswear; and taught literature at St. John’s University in New York City. 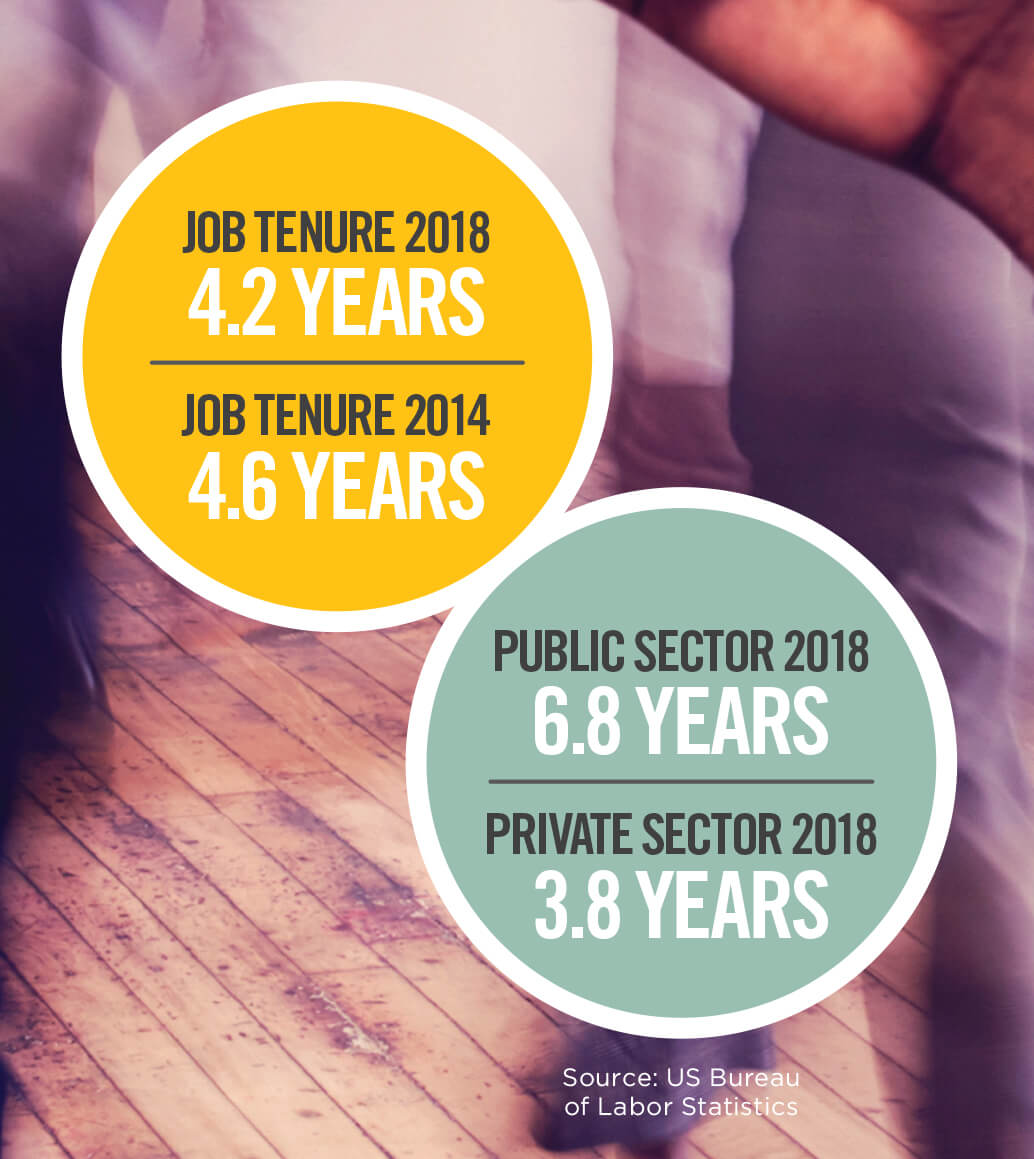 She’s always done well with each role, she says. New opportunities just kept presenting themselves at times in her life when she wanted to try something new. “Today, careers are so much different than what they used to be,” says Fusco.

Decades ago, the “ideal” career was one where you worked at one company, taking on additional responsibilities as you got older and wiser. Switching jobs multiple times was, according to the stereotype, something only people without a formal education did. Switching careers was even worse, a sign that you couldn’t commit or failed so miserably at your first career that you couldn’t be hired to do it again.

That stereotype was prevalent, even if the actuality of one-career-for-life never really was. But now workers are switching their roles nearly 50 percent faster than they swap their cars. Indeed, the average job tenure in the United States has dropped to 4.2 years, according to data analysis by the Bureau of Labor Statistics (BLS). That is down from 4.6 years just five years ago and continues a long-term decline. This isn’t the so-called gig economy, where workers pick up projects on a freelance basis or use their cars for ride sharing. These are people like none other than Amazon CEO Jeff Bezos, a computer science grad who had been a software coder in the telecom industry, a product manager for an investment bank, and a hedge fund analyst before settling on the career he wanted.

Call it the “nomad economy,” where an increasing number of highly skilled employees are broadening themselves by taking on new professional challenges every couple of years. The trend is impacting how workers need to manage their professional lives as well as how organizations should hire and get the most out of them. “Certainly, it has become increasingly uncommon for people to have lifetime or decade-plus tenures at companies,” says Dorie Clark, author of Entrepreneurial You and an adjunct professor at Duke University’s Fuqua School of Business. “As a result, the entire economy is changing, and [changing] how workers need to operate.” 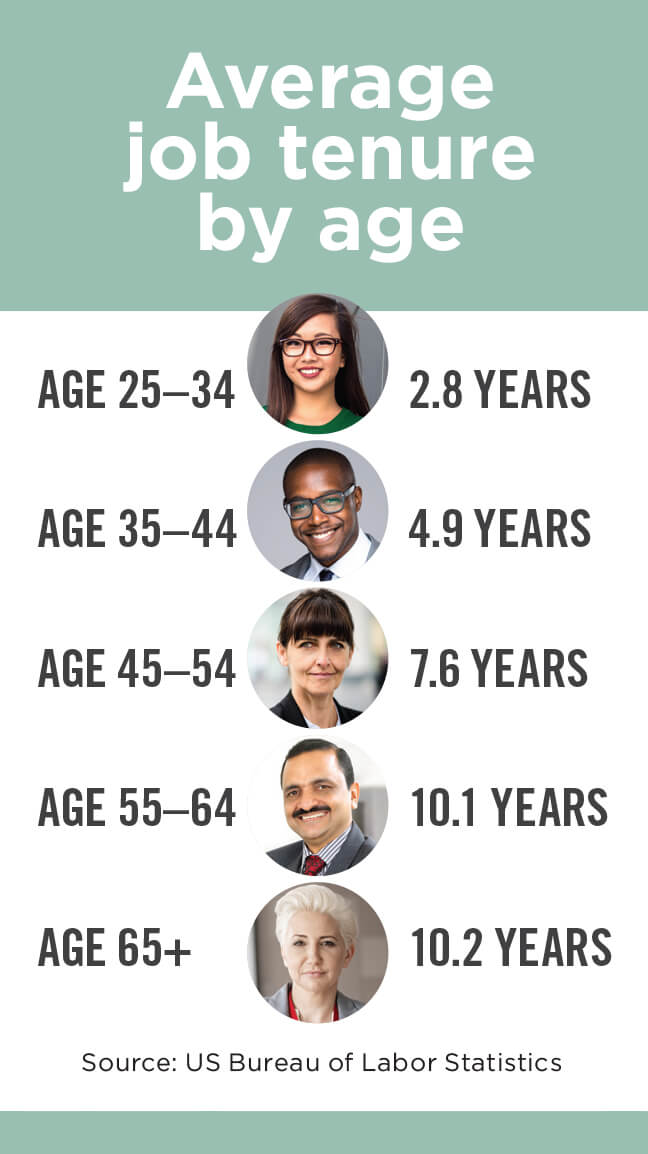 In some ways, the idea of a single lifetime job was always a bit of a mirage. The BLS found that those born between the years 1957 and 1964—younger baby boomers—held an average of 11.7 jobs between the ages of 18 and 48. More than a quarter of people held 15 jobs or more. Those results shouldn’t be too surprising. Business fortunes can go up or down, people get hired away, families move, workplaces can become toxic.

But not only is that old paternalistic ideal disappearing, it has become something of an oddity itself. A recent survey of US workers found that 64 percent of them have a favorable view of job-hopping. Among those 34 or younger, 75 percent said it would actually help their careers. In other words, a nomadic career isn’t sign of instability—it’s a feature.

Millennials, people born between 1982 and 2000 and now the largest part of the US workforce, seem particularly disinterested in staying put. The average job tenure of those ages 25 to 34 is less than three years, BLS found. For those ages 55 to 64 it is three times that, at 10.1 years.

Part of that is sheer age, of course. Younger workers haven’t had as much time to find their calling, set roots, and settle into the right job. But experts say it’s also part of a larger cultural shift. Indeed, while job-hopping once was a sign of a lack of commitment or worse, nowadays it’s almost as if the reverse is true.

“Hiring managers used to be very skeptical of job-hoppers and people who moved around a lot,” says Jeanne Meister, founder of the New York City-based advisory firm Future Workplace. “Now the pendulum has swung to, ‘Why did you stay in one company or one job role for so long? Why did you not develop a breadth of skills and experiences?’ 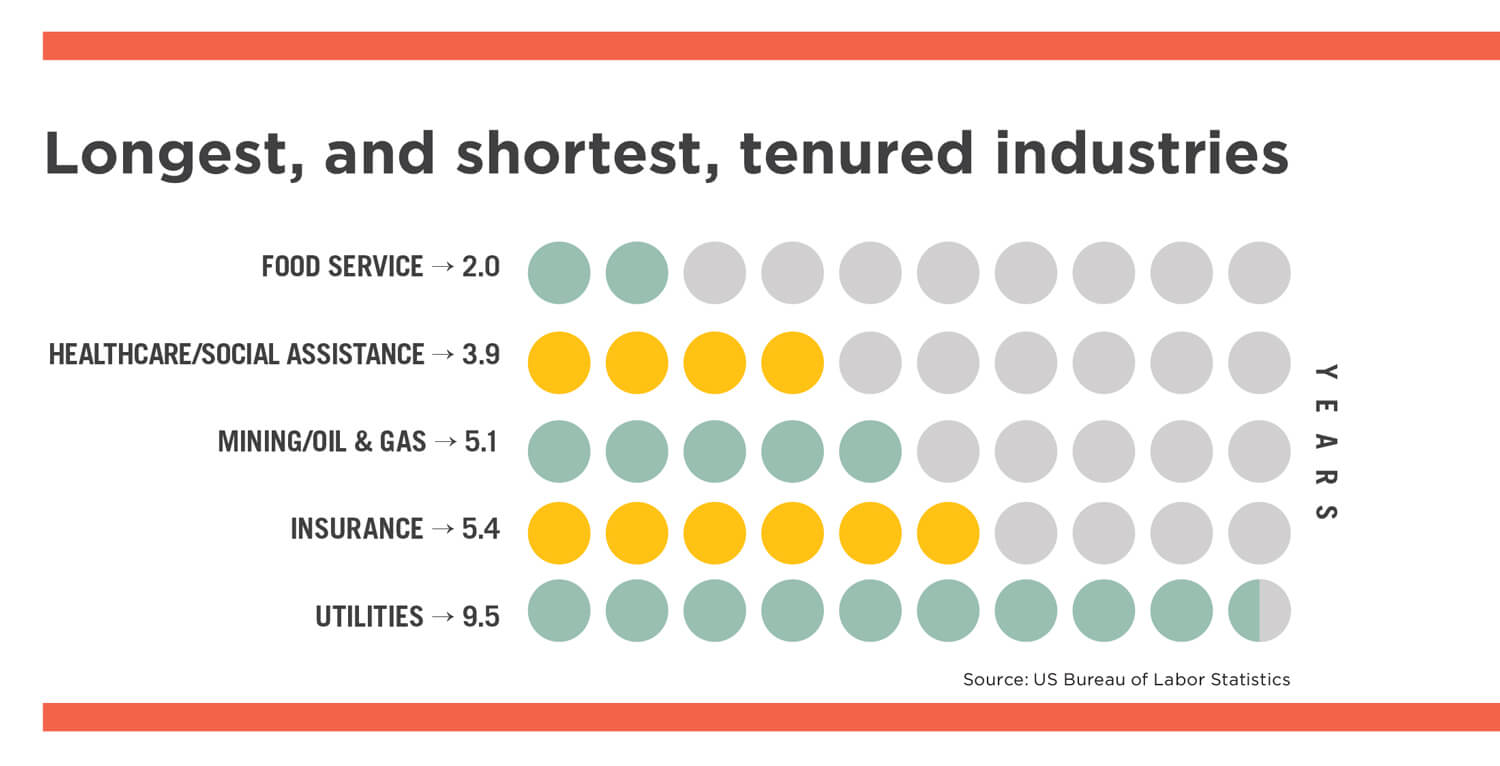 ”Henry De Sio probably would have welcomed this new attitude a long time ago. He has been a labor organizer in several states, an author and both deputy assistant to President Obama and chief operating officer for his first presidential campaign. “About every seven years I take a six-month sabbatical, reflect on where I’ve been, and figure out where I can have impact next,” says De Sio. “I’ve never seemed qualified for any job I’ve ever taken, and yet I’ve always been successful.”

This new nomadic reality is being fueled by a robust economy. Unemployment is below 4 percent, a level not seen since the late 1960s. There are a record 7.1 million open jobs in the United States, and companies are constantly lamenting that they can’t fill roles. There are plenty of opportunities for people to switch.

But while there might be many opportunities, workers have to make some changes of their own in order to take advantage of them. The idea of “climbing the corporate ladder” is rapidly falling away. In the nomad economy, workers have to make lateral, diagonal, and occasionally downward moves to get a new role that they want.

“It’s more like a jungle gym than a ladder,” says Meister. “There is so much movement of talent, and that has advantages for both the employee and the employer. Even full-time employees are operating like gig-economy workers. All the lines are blurring.”

Another fact of life for nomads is that you can’t rely on your existing employer to provide all your professional training. Yes, some firms have established successful learning academies and career path programs as ways to improve employee engagement and productivity. Nevertheless, there’s an increased expectation that employees take it upon themselves to pursue lifetime learning, Clark says. “If you want to be successful, you can’t sit and wait for things to be done for you.”

Next, workers need to drop assumptions around pay. By staying in-house, workers can expect typical pay bumps of around 1 to 2 percent, after accounting for inflation. However, changing companies or careers could change those dollar figures dramatically—both up and down. The good news is that any short-term hit to pay can be counteracted by picking up new skills. “If over three or six months you develop a valuable new skill that the marketplace rewards, like learning a new programming language that is in hot demand, then you can name your price,” Clark says.

Next, think of your personal and professional network as a garden that has to be tended constantly. If you are locked into one job at one company, then there is no urgent career necessity for interacting with people at other firms or in adjacent fields. But in the nomad economy, if you let your network dry up, then you could find yourself in consistent financial trouble. 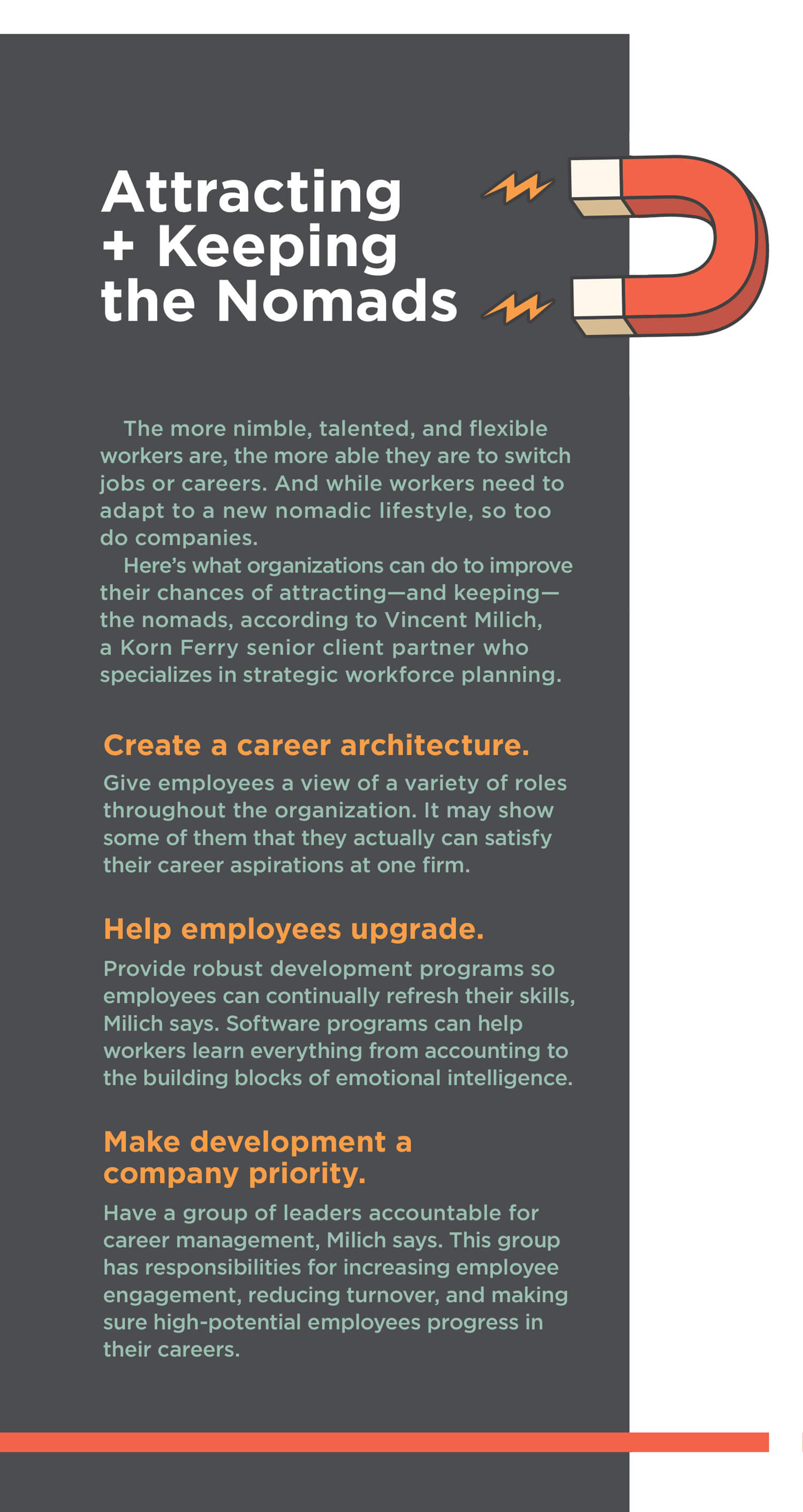 In particular, workers have to extend their networks across geographies and industries. “For instance, if marketers know that data science is transforming marketing, then they need to grow their network in that space too, because that’s where the function is moving,” says Meister.

Finally, remember that even though an array of opportunities may be available to you in the nomad economy, that doesn’t mean you should automatically take them.

This is where discretion comes into play. Only make a move if it is the right fit—though knowing what that “fit” is takes some research and self-awareness. Experts say it’s a point many people miss, especially when they want to change jobs or relocate, or an opportunity excites them.

The notion of career nomads might carry with it a negative connotation of someone aimlessly drifting through life. Actually, the approach shouldn’t be aimless at all, suggests John Petzold, a Korn Ferry senior client partner and leader of the firm’s CXO Optimization practice. It should be deliberate and strategic, even if your path occasionally changes direction. After all, you are basically constructing a “career mosaic,” he says, and you need to do so thoughtfully.

Take Henry De Sio, for instance. He recently left a role as a senior executive at a global nonprofit in the years following his White House stint, and he’s again in the middle of one of his once-every-seven-years sabbaticals. He’s used it to add new skills—teaching as a part-time university faculty member, coaching his kids’ teams, getting certified as an executive coach, and working on a second book. He is also taking time to think about what his next incarnation is going to look like.

A career shift might be intimidating to some people. But not for him, since he has already pulled it off many times before.

“The idea of a traditional career ladder is going to be as outdated as a typewriter on a shelf,” he says. “People have to get much more flexible thinking about their careers going forward. But I want to tell them that it’s nothing to be afraid of. It’s actually very exciting.”