Electric Vehicles: The Race for Lithium

Lithium is not a rare mineral, but thanks to the growth in electric vehicles it is suddenly an in-demand one. Can producers keep pace?

In a desolate part of the northern Nevada desert, more than 60 miles from the nearest town, lies a major key to the United States’ ability to compete in the electric-vehicle market of the future. Thanks to a volcanic eruption millions of years ago, the area is considered the largest known lithium deposit in the US—and it is the proposed new site of what will ultimately be the largest lithium mine in North America.

Known as Thacker Pass, the mine is budgeted at more than $500 million, and upon its completion in 2023 it is expected to produce just less than 44.1 million pounds of lithium hydroxide annually. “The time required to line up the financing and build a mine and chemical plant takes years,” says Jon Evans, president and CEO of Lithium Americas, the Vancouver, Canada–based company that is building Thacker Pass.

Make no mistake; the race to procure lithium is on. While the mineral is not rare, the expected growth in electric vehicles, energy storage units, mobile devices, and other technology that uses it in batteries means that lithium is suddenly hot. The International Energy Agency estimates electric-vehicle sales of between 23 million and 43 million annually by 2030, for instance. “The industry has moved faster than lithium development has,” says Seth Steinberg, a principal with Korn Ferry’s Supply Chain Center of Expertise. “There’s concern amongst our clients about their ability to meet demand.”

There’s no question that the electric-vehicle market is only going to get bigger. The question instead is how fast. Volkswagen, for instance, plans to make more than 70 electric models by 2030. Amazon is already on record with a commitment to buy 100,000 electric vehicles over the same time frame. Part of the reason for the United Automobile Workers strike against General Motors in 2019 was the company’s plans to shift more production toward electric and autonomous vehicles. 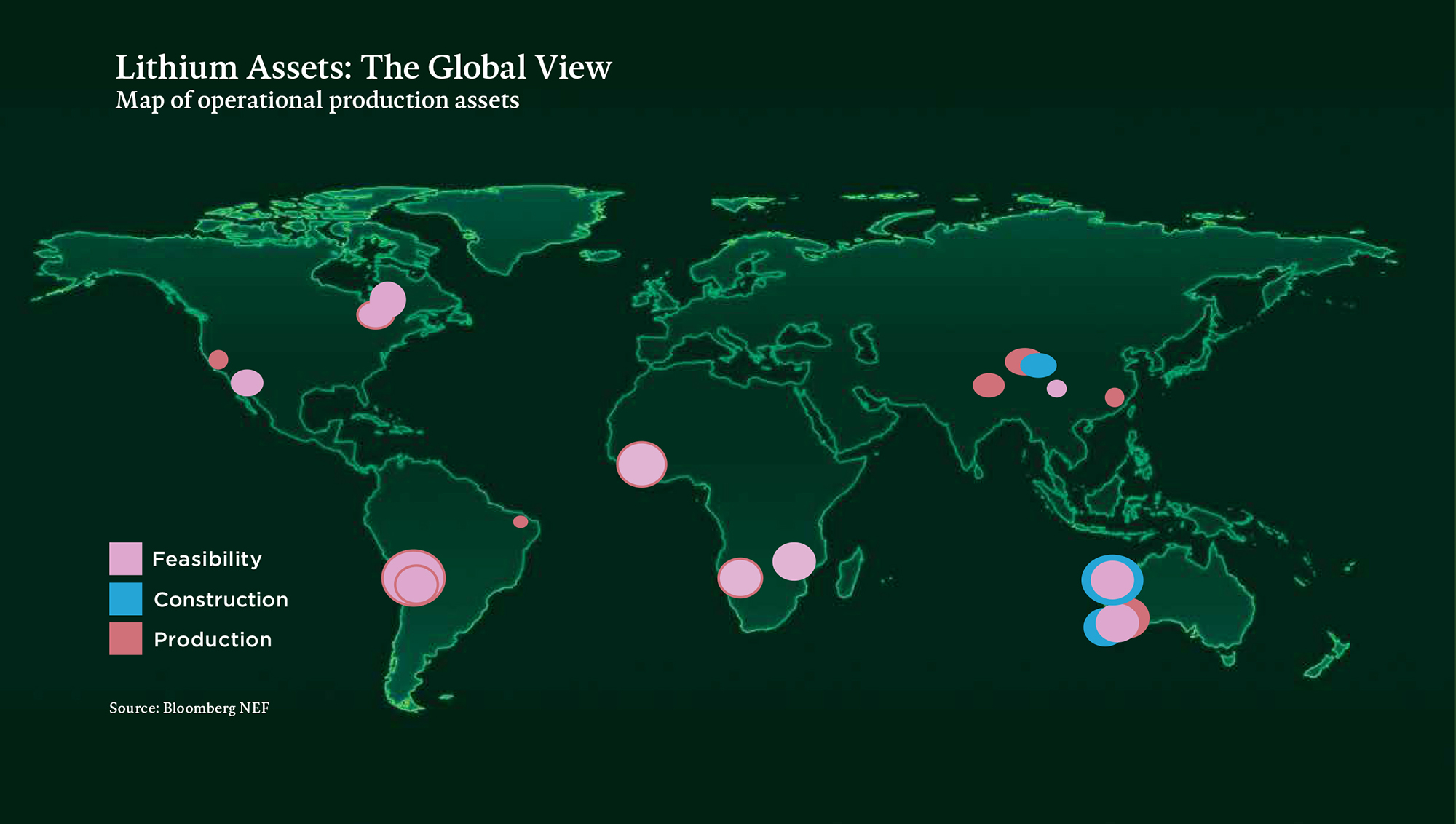 “The change in the mix of vehicles is going to change how the market works,” says Evans. “The US and Europe don’t have the kind of supply chains needed for electric-vehicle production at scale right now.”

The very first lithium extraction occurred in California in the 1930s, and the US ranked as the world leader in lithium production until the late 1980s. After the nuclear arms race ended, however, the market shrank and most of the functioning mines moved overseas, closed, or shifted focus to other, more lucrative minerals. Of course, leaders of that age could not have foreseen the market for mobile devices and electric vehicles of the future. But leaders of today could have seen it coming a lot sooner. After all, mines don’t turn back on with the flip of a switch.

Four countries today dominate lithium production: China, Argentina, Chile, and Australia. Thanks in part to some friendly government policies—namely a requirement that foreign automakers use locally produced batteries—Chinese makers of lithium batteries exert a great influence over the global market. Moreover, China ranks as the largest seller of electric vehicles, with more than 50 percent of the market.

US and European business and political leaders have raised concerns over China’s position as the top seller and battery maker in the burgeoning electric-vehicle market, and not just because of supply-chain issues. Given the ongoing trade battle between the US and China, as well as general apprehension about each other’s technology policies and practices, lawmakers in both countries consider the development of the electric-vehicle market a national security issue as well.

“Competing in electric vehicles will require creative strategies as pertains to strategic sourcing and supplier relationships,” says Steinberg. That means forming joint ventures, profit sharing, and co-owning ventures, which hasn’t been a strong suit in relationships between the US and other countries. It’s worth noting that Tesla’s massive Nevada “gigafactory”—a partnership with Japan’s Panasonic—accounts for most of the electric-vehicle battery manufacturing in the US. (Tesla is also building a new factory in China.)

This security consideration is also part of the reason the US government is trying to promote and support lithium production activities. A Department of the Interior regulation finalized in May 2018 includes lithium on a list with 34 other minerals deemed critical to national security. European countries are taking similar steps to ramp up lithium manufacturing over the next five years. “Capacity expansion takes years, and the US and Europe are trying to figure out how to keep supply churning,” says Steinberg.

To be sure, according to the Financial Times, China will control 56 percent of the world’s lithium-ion battery capacity by next year, with Europe and the US following at 19 and 14 percent, respectively. In Australia, no fewer than half a dozen new mines have begun operations since 2017.

Part of the reason for the lag in the US is that companies are hesitant to commit to the capital investments required, especially since the projected return on investment won’t be realized for years. While growth projections for electric vehicles are strong, they are still just projections, and some boards of directors prefer to take a wait-and-see approach to the market’s development before signing off on hundreds of millions of dollars in investment capital. Consider, for instance, that Warren Buffett’s Berkshire Hathaway wants to develop a lithium mine in California’s Salton Sea but is having trouble securing partners and funding commitments. Or that electric-vehicle sales in the US and Europe combined don’t add up to those in China alone (fewer than 500,000 units annually for the US and Europe versus more than 1 million in China).

Recent market volatility and differing views among analysts and industry experts about whether or not lithium pricing has reached a bottom are further complicating new investment decisions. James Bardowski, who follows the lithium market as the chief investment officer at GLJ Research, says new projects are being held up and expansion has stalled because of the confusion. Bardowski, who thinks lithium pricing will continue to decline until at least the second half of the year, points to a couple of companies that have said they would review expansion plans or have filed for bankruptcy protection.

“There is a lot of lithium inventory sitting in China that needs to be digested before pricing can change,” says Bardowski. “Right now there is enough capacity to supply nearly all the demand for electric vehicles until 2025.”

The relative newness of the lithium market, combined with the nuances in pricing and supply chains, presents talent-pipeline challenges for leaders. “Organizations need strategies to ensure a robust supply of lithium at the right price, and there’s a finite universe of people with the skills and knowledge who can do that,” says Korn Ferry’s Steinberg.

To build up their talent pipelines, organizations are pulling seasoned veterans who spent time in the industry during its heyday—which would put them at the tail end of their careers today—back into the field. Think of it like a sports team signing a proven veteran to a free-agent contract to make a final run at a championship. Experts say demand remains high for seasoned professionals in both technical and nontechnical roles.

Since many lithium jobs are located in rural areas, organizations also partner with local colleges and tech schools and offer incentives such as rotational training to students who stay to work on-site. Lithium Americas actually created its own class at a college in Argentina to train students in lithium-related work who then graduated to working at its location in that country.

Two factors working in favor of lithium companies when it comes to recruiting younger talent to the industry are its growth prospects and sustainability features. Lithium mining is less damaging to the environment than other forms of mining, for instance. “Lithium mining and chemical purification is poised to take over the smokestack part of the economy,” says Lithium Americas’ Evans. Of course, there is a downside to that—workers in traditional auto and energy plants could see their jobs moved overseas or lost without reskilling to transition to new energy roles.

Still, with many lithium mines being either retrofitted or built from scratch, they offer young engineers an opportunity to create innovative and sustainable features that can limit environmental damage. Mines are being built away from ecologically sensitive locations, such as areas that are susceptible to wildfires. Designs also call for them to be as close to carbon-neutral as possible or to minimize the use of fresh water through recycling. Studies also show that a greater proportion of electric vehicles relative to gas-consuming ones will reduce pollution, and that the recycling of the lithium batteries used in electric vehicles will ultimately reduce reliance on new mining.

“Lithium chemical companies can do well and do good by leveraging smart design and community relations to create an auto industry that is more environmentally sustainable than the one we have today,” says Evans.