Many large food companies risk shrinking in size if they don’t keep up with consumer preferences.

Propelled by the pandemic, the plant-based proteins market is poised to grow to $85 billion. But only if food makers can adjust quickly.

In central Canada’s Manitoba province, not far from a water tower painted to look like a large Coca-Cola can, stands one of the most important links in the modern food supply chain: a $500 million pea-processing plant owned by the French-based food ingredient company Roquette. Under construction since 2018, the plant is the largest pea-processing facility in the world, capable of handling more than 125,000 tons of peas annually.

And that’s just the beginning. According to Roquette CEO Jean-Marc Gilson, the plant will initially employ around 150 people in one facility, but there is space to add another four or five more facilities that would accommodate up to 1,000 employees and hundreds of thousands more tons of pea-processing power. Based on the growth projections for the plant-based protein market, of which peas are a major part, Roquette will need the extra capacity to keep up with demand.

“It’s a race,” says Gilson. “The plant-protein industry is going to be very big, and it is a top-of-the-house priority for every food company.” 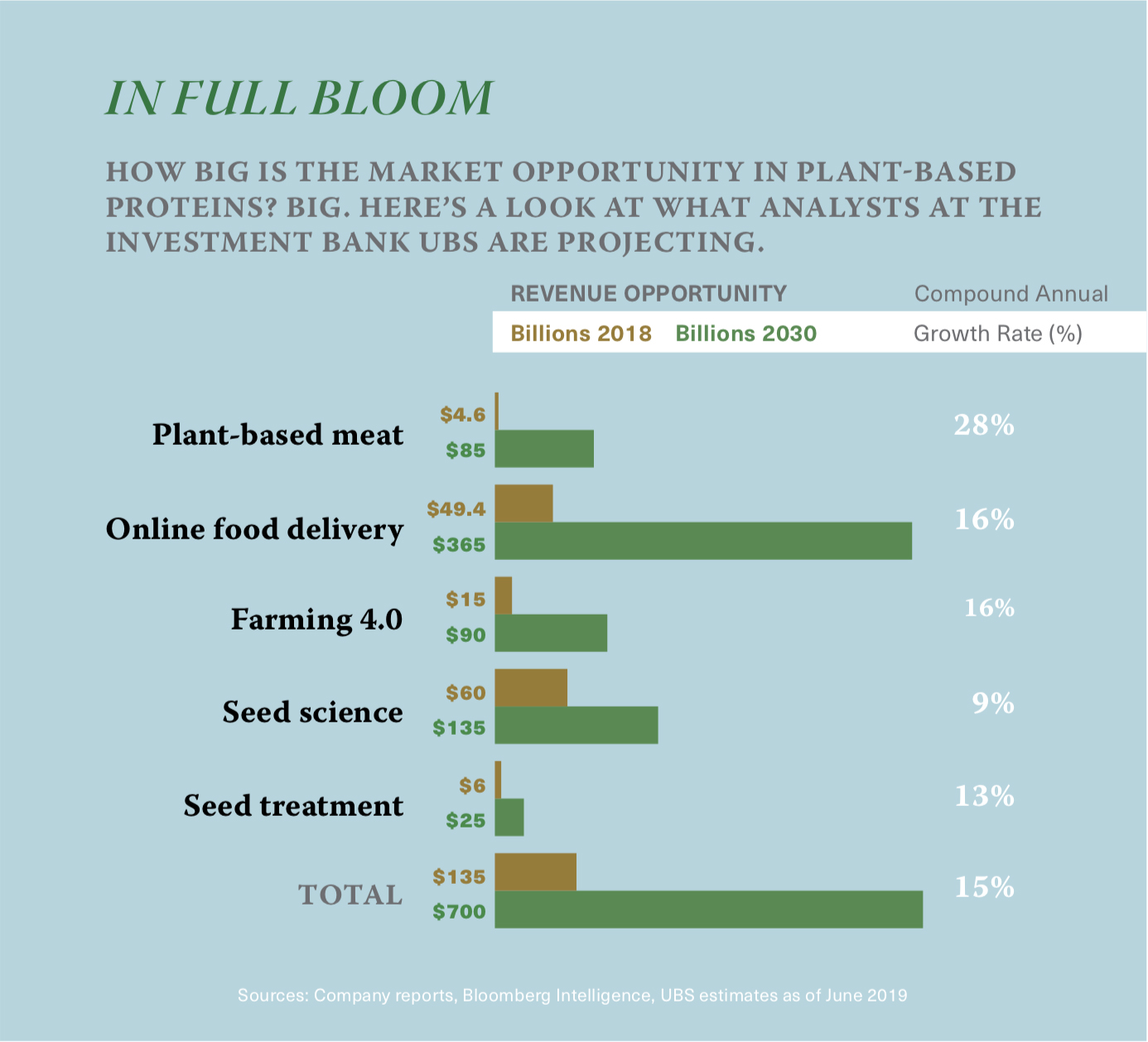 Analysts predict that the market for plant-based protein and alternative meat will explode from $4.6 billion in 2018 to an eye-popping $85 billion by 2030, driven by a growing global population and consumers who are making more sustainable, health-conscious food choices. It’s small wonder that major traditional meat producers such as Tyson, Smithfield, and JDS now have C-suite executives overseeing dedicated plant-based food divisions, and start-ups like Beyond Meat and Impossible Burger are worth billions of dollars.

While the trends driving plant-based protein’s expansion were there before COVID-19, the pandemic certainly accelerated them. “COVID heightened awareness around the impact of meat on the environment and health, and encouraged more people to find alternatives to the animal-based food supply chain,” says Frederika Tielenius Kruythoff, a Korn Ferry senior client partner responsible for the firm’s Agribusiness practice in Europe, the Middle East, and Africa. She notes, for instance, that between 60 and 75 percent of emerging infectious diseases in humans come from animals. What’s more, the COVID-related shutdown of several meat-processing plants has also helped drive some of this, motivating people who aren’t necessarily vegetarians to incorporate plant-based food into their diets.

Great growth doesn’t happen without great disruption, of course, and the potential impact of the shift to plant-based proteins on food manufacturers cannot be overstated. It takes, for example, a lot of capital to build a plant-based protein facility. Other challenges include figuring out which plant protein source to focus on (there’s more than peas), developing solutions that imitate the taste and texture of meat and fish, and building a purpose-driven business at scale, among others.

And there’s the people side to all this. Kruythoff says that as plant-based proteins become an even bigger part of their growth strategies, food manufacturers will need to develop new tactics and pipelines for recruiting as well as enhance retention efforts to protect in-house talent. “The fight for talent is already underway and is only going to intensify,” she says.

The growth in plant-based proteins isn’t coming at the expense of animal-derived meat, however. People aren’t abandoning bacon and hamburgers—in fact, they are eating more than ever. Experts estimate the animal-protein market will grow at a compound annual rate of 6 percent between now and 2025, for instance, reaching $205 billion.

Much of that growth can be traced to geography and socioeconomic status. While plant-based proteins are experiencing exponential growth in fully developed economies like North America and Europe, areas with less mature economies, such as Africa, Asia, and South America, are eating more meat. From a market perspective, Sean McBurney, a Korn Ferry senior client partner and sector leader of the firm’s North American Agriculture practice, says what’s happening is that as demand for animal protein migrates to new markets and demographics, plant-based protein consumption is rising to fill the void.

That macrotrend helps explain the so-called “flexitarianism” movement, which refers to meat eaters who are making a conscious effort to substitute animal meat with plant-based proteins in their diets. The practice has already been on the rise among younger generations, and since the pandemic, other groups appear to be giving flexitarianism a try. Indeed, recent data shows that around 18 percent of Americans who have bought plant-based proteins did so for the first time during COVID-19. More importantly, 92 percent of those said they would likely continue to buy plant-based meats.

“COVID led people to experiment with plant-based meat alternatives due to animal protein shortages, and those first-time buyers are turning into repeat customers,” says McBurney.

From an organizational design perspective, though, all this creates challenges for most food manufacturers. Historically, large food companies are designed around product lines, and since many of them are commoditized, there isn’t much differentiation in how they are run. Now, however, McBurney says firms need new skill sets to develop new specialty products and quickly shift investments from slow-growth areas into fast-growing ones. As Leticia Gonçalves, president of global specialty ingredients at the food ingredient company ADM, sees it, future growth will depend on how companies can adapt their supply chain and innovate new plant-based protein products without compromising taste and texture. “It takes a lot more work to make chicken nuggets from plants than from a chicken,” she says.

And it takes a lot more experience. This market is so nascent, experts say, a lot of executives aren’t even familiar with the field. But organizations will need people who can understand the right strategies to develop the business, for instance, and to formulate a sales and marketing approach for it. Given the complex web of regulations governing food production from country to country, there will also be a demand for corporate-affairs pros to navigate the political landscape. Then there’s the need for biologists, chemists, nutritionists, and other research and development staffers to create new food items from plant-based proteins.

For its part, ADM is turning to partnerships to help tackle all this, such as the one it has with the beef producer Marfrig called PlantPlus Foods. The partnership calls for Marfrig to handle production and distribution, while ADM will contribute plant-based ingredients, flavors, and product development expertise. “We’re creating an entirely new ecosystem in a high-growth area within the company that is separate from our other, more traditional operations,” says Gonçalves.

Traditional food companies are also investing heavily in plant-based protein start-ups like Meatable as a way to forge relationships and gain expertise. For instance, 301 INC, a business development unit within General Mills focused on identifying top-line growth opportunities in emerging food companies, has invested more than $100 million in venture capital across a dozen start-ups, six of them plant-based, including Beyond Meat. Similarly, Tyson Ventures features an “Internet of Food” fund through which it has invested in plant-based start-ups like Future Meat Technologies and New Wave Foods. “Large food companies are missing the muscle to be as close to the ground as start-ups when it comes to consumer trends,” says Pete Speranza, one of the founders of 301 INC.

Venture capital investments also provide both sides with a de facto talent pipeline. Executives at food companies making the investment often join the start-up company’s board to help recruit talent and sometimes end up on the other side as they follow their own passions. For instance, Speranza recently left 301 INC to become the CEO of the plant-based food brand Wicked Kitchen UK. He made the move, he says, because he wanted to use his expertise and passion to drive more impact on the health of people and the planet. “Plants need to shift to the center of the plate,” he says. Similarly, venture investments give larger food companies a path to a merger or acquisition, bringing innovation and entrepreneurial talent in-house.

Another combination of sorts is taking place on the talent side, with younger workers drawn to the sustainability and purpose aspects of plant-based food production converging with veteran food executives who have the operational skills and institutional knowledge needed to scale the market.

“Right now, it’s a barbell-shaped talent pool,” says Korn Ferry’s Kruythoff. That’s not necessarily a bad thing, however, as organizations are pairing mission-driven younger workers with experienced older workers in mentor-mentee relationships. “Each side gets something from the other,” she says.

Food companies are also looking to other industries that have gone through a similar transformation journey for talent. Roquette’s Gilson is one example. Prior to joining Roquette in 2014, he spent the bulk of his career in the specialty chemical industry. Gilson says that while he didn’t know much about the structure of the food industry before joining Roquette, there were clear parallels with specialty chemicals in terms of how the business needed to evolve. “The basic knowledge about separating and refining existed, but the talent and focus needed to shift from commodities to faster-growing specialties such as peas and other plant-based proteins,” he says.

Another big change, he says, is that food, like chemicals, is evolving from isolated silos to an ecosystem approach. That involves moving from a single-ingredient focus to working more closely with partners all along the supply chain, from the farmers growing the crops to the technicians creating new products to marketing and sales. Under the traditional model, for instance, a product specialist would focus on a particular protein. In the new system, there is a greater need for technicians who can marshal a broad range of ingredients to create a flavorful product at scale and in line with rapidly evolving consumer tastes. “The field is growing so fast, it needs to be separated from other activities and treated differently,” says Gilson.

That’s part of the reason Roquette is making its pea play in Canada. Canada ranks as the largest pea-producing country in the world and exports about 95 percent of its annual yield of the crop to countries like China and India. From a sustainability perspective, pea farming has one of the smallest environmental impacts. Most importantly, Winnipeg, the capital of Manitoba, has aggressively collaborated with local companies to develop talent and retention programs to attract skilled young workers. Indeed, Roquette has said most employees for its plant were recruited locally, and the company worked with Canada’s Southern Chiefs’ Organization to match talent with its employment needs.

“We want to hire and train talent close to the plant,” says Gilson. “The area is attracting a lot of young talent out of university who, from a sustainability point of view, like the idea of working with plant-based proteins.” And that, he hopes, is a recipe for success.

“The plant-protein industry is going to be very big, and it is a top-of-the-house priority for every food company.”

“COVID led people to experiment with plant-based meat Alternatives, and those first-time buyers are turning into repeat customers.” 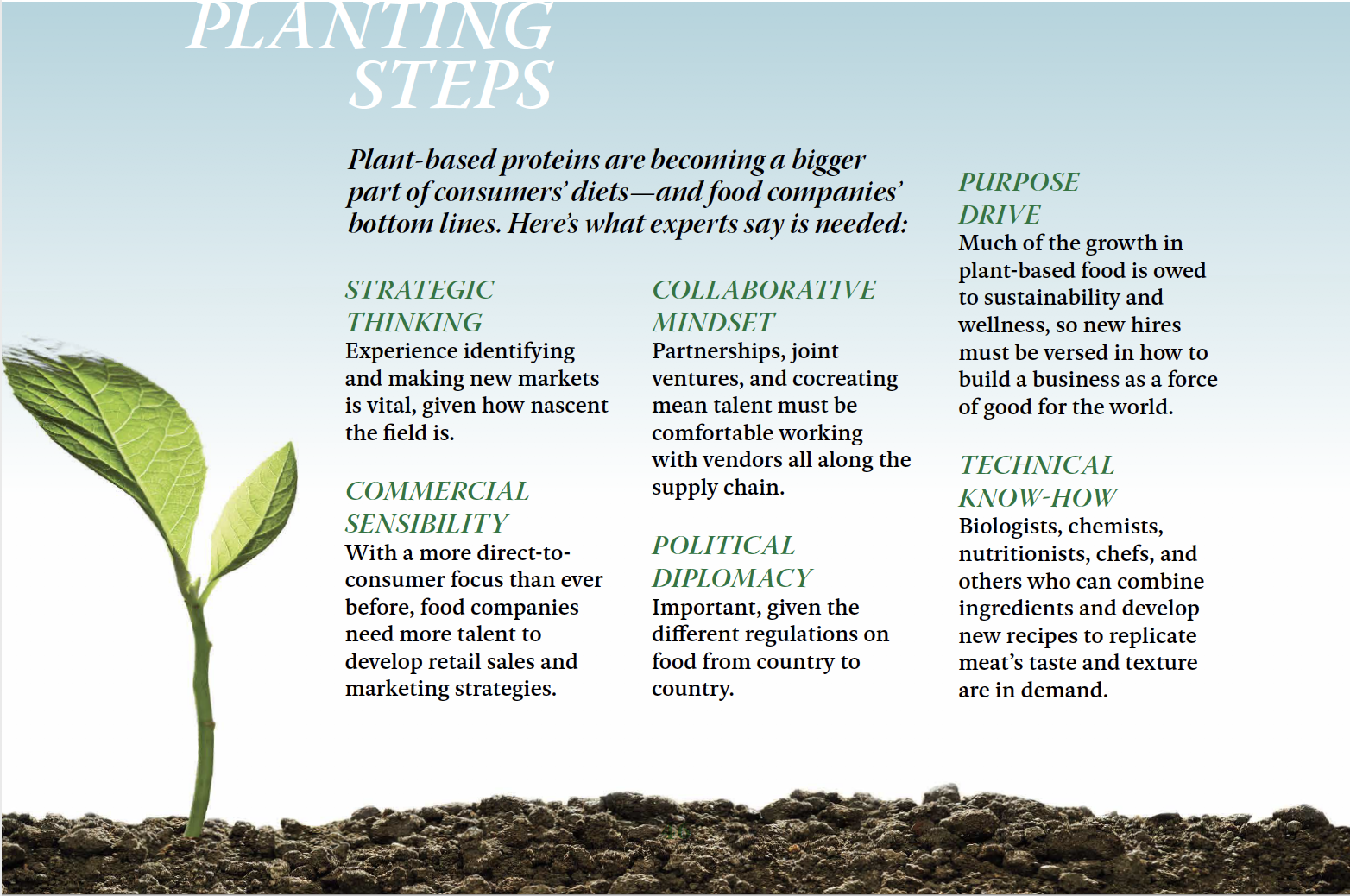