With diversity numbers still lagging, some employees are taking matters into their own hands.

It was the smart step to take. During the summer, at the height of racial tensions and goals for healing across the country, the massive online-dating corporation Match Group decided that, following a spinoff, it would assemble a more diverse board of directors. Instead of having one woman and no people of color on a board of nine, it created an 11-member board with five women and three directors of color. All of which got Thomas Gaissmeir thinking.

As the chief human resources officer of the Dallas-based tech firm, he realized that while everyone now knew the makeup of the board, they still didn’t know the diversity numbers among Match Group’s 1,800 employees. Few firms release this number, so on his own, Gaissmeir decided to publish those demographic statistics in the company’s internal newsletter. Never mind that the idea hadn’t been signed off yet by the entire C-suite or CEO. He felt the time for transparency was needed. “You have to start with an honest assessment of ourselves,” he says.

An executive having an innovative idea to help solve a difficult challenge isn’t new. What is, of course, is that he skipped all of the bureaucratic steps usually needed to implement something on such a controversial business issue.

Call it “do-it-yourself diversity.” These mid-level managers and executives are, often single-handedly, trying to make their organizations more inclusive. Sometimes their bosses have just told them “do something.” Other times they’re frustrated at how slowly their firms are moving, and have their own good ideas. Whatever their motives are, these self-starters may very well be a key factor in determining whether the latest round of corporate commitments to diversity—an estimated $7.2 billion worth and counting—will succeed. “Everyone has a sphere of influence, no matter what level of leadership you are,” says Michelle Silverthorn, author of Authentic Diversity: How to Change the Workplace for Good. 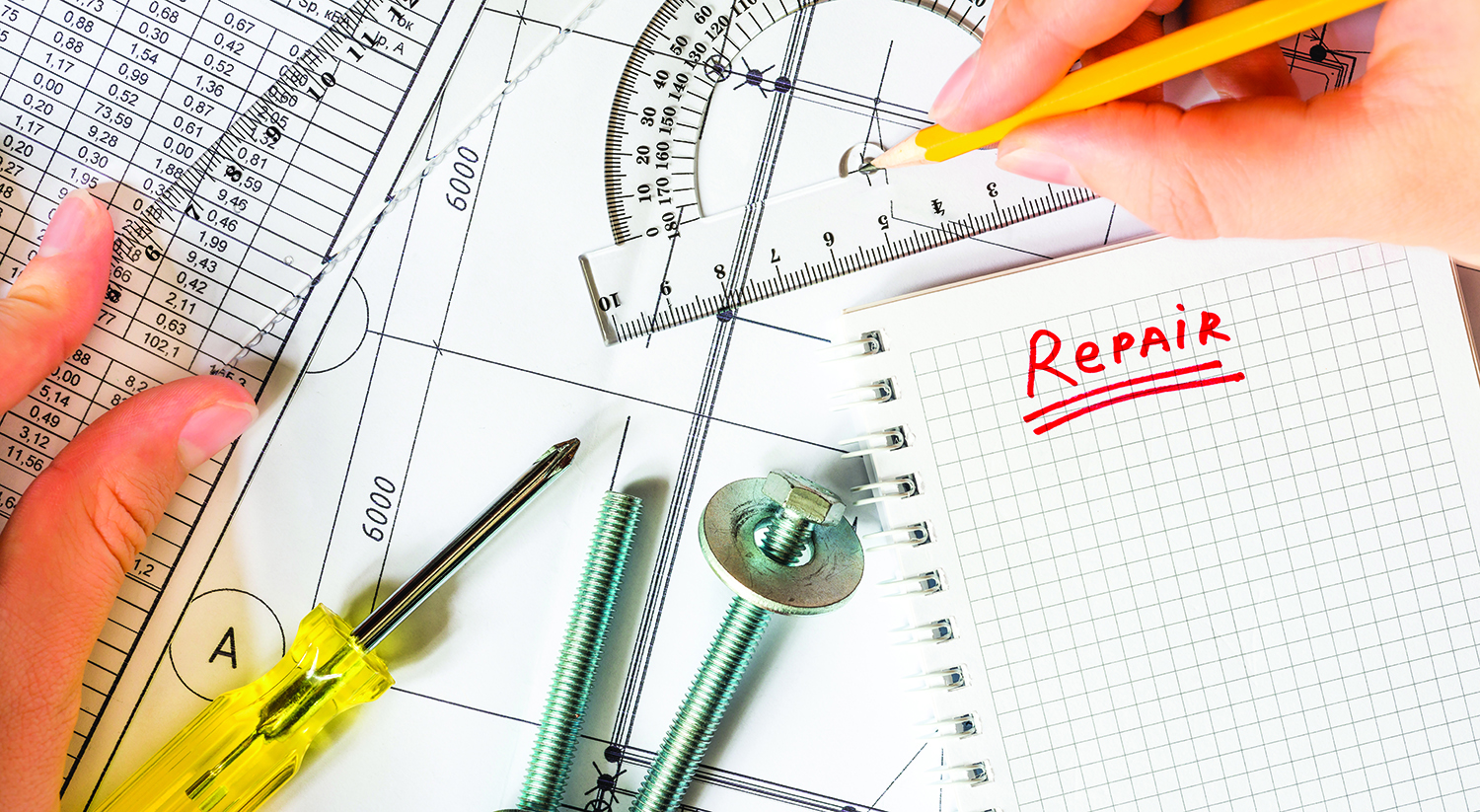 Clearly, in the area of diversity and inclusion, nothing much else has worked. At last count, there are only four Black CEOs in the Fortune 500 and nine Latinx top bosses, while the percentage of senior leaders below the C-suite who are people of color isn’t much better. Even entire industries throwing a vast amount of time and money at the issue haven’t made much of a dent; in 2014, fewer than 9 percent of employees at any of the United States’ biggest tech firms were Black—and that’s still true now. Minority-owned businesses are often left off supplier lists, and non-White customers are too often considered an afterthought at too many organizations. That said, going it alone on diversity is often easier said than done. As anyone who’s worked in any company knows, taking on a problem alone can backfire fast. Experts say it takes a great deal of empathy, agility, and organizational awareness to pull off these diversity drives successfully. The big question is: Are there enough DIYers who can push their organizations to change?

Entrepreneurs and CEOs often get the credit for inventing and driving big innovations, and certainly the idolization of Silicon Valley culture perpetuates that. But the history of big business is filled with brilliant ideas that came from the depths of the corporate hierarchy. Scotchgard was invented and perfected by two 3M chemists in the 1950s. Back in the early 1960s, a group of mid-level managers at Rolls-Royce started offering a performance-based contract for its Viper engine, tying compensation to how well the engine actually worked—a business-model redesign that turned the manufacturing world on its head. One of the foremost innovation factories of the 20th century was a group of scientists and managers tucked away among the hundreds of thousands of employees at the telecommunications giant AT&T. “At big companies, it’s the mid-level people who have to generate the ideas,” says Tom Nicholas, a professor of business history at Harvard University.

So it isn’t surprising that ways to diversify a company aren’t coming from the top. After all, many massive, corporate-wide attempts have failed. It isn’t that companies don’t want to become more inclusive (although there are still some). Indeed, experts say there’s a push by firms worldwide clamoring to be more diverse. (Depending on the country, diversity could mean expanding roles for people of different religions, nationalities, genders, or skin colors.) But experts say it takes years of effort to unwind the historic underrepresentation and unconscious bias that have been baked into corporate cultures. Companies—and their leaders—often haven’t devoted the time, resources, or will to make programs successful at a corporate scale.

Some of the problems are so small that they can be tough to notice from the top. Their small size belies how big of an obstacle they can become for a company that wants to become more inclusive, though. Over the summer, as George Floyd’s killing and the subsequent protests put a spotlight on racial inequality, many large firms pledged to do more business with Black-owned suppliers. That sentiment change would have seemed to bode well for William Yates, MD, a one-time surgeon who four years ago started a firm selling metal detectors and other security-screening equipment. As COVID-19 started ravaging China, he recognized it could become a problem in the United States, so last January, he added temperature scanners to his screening products. 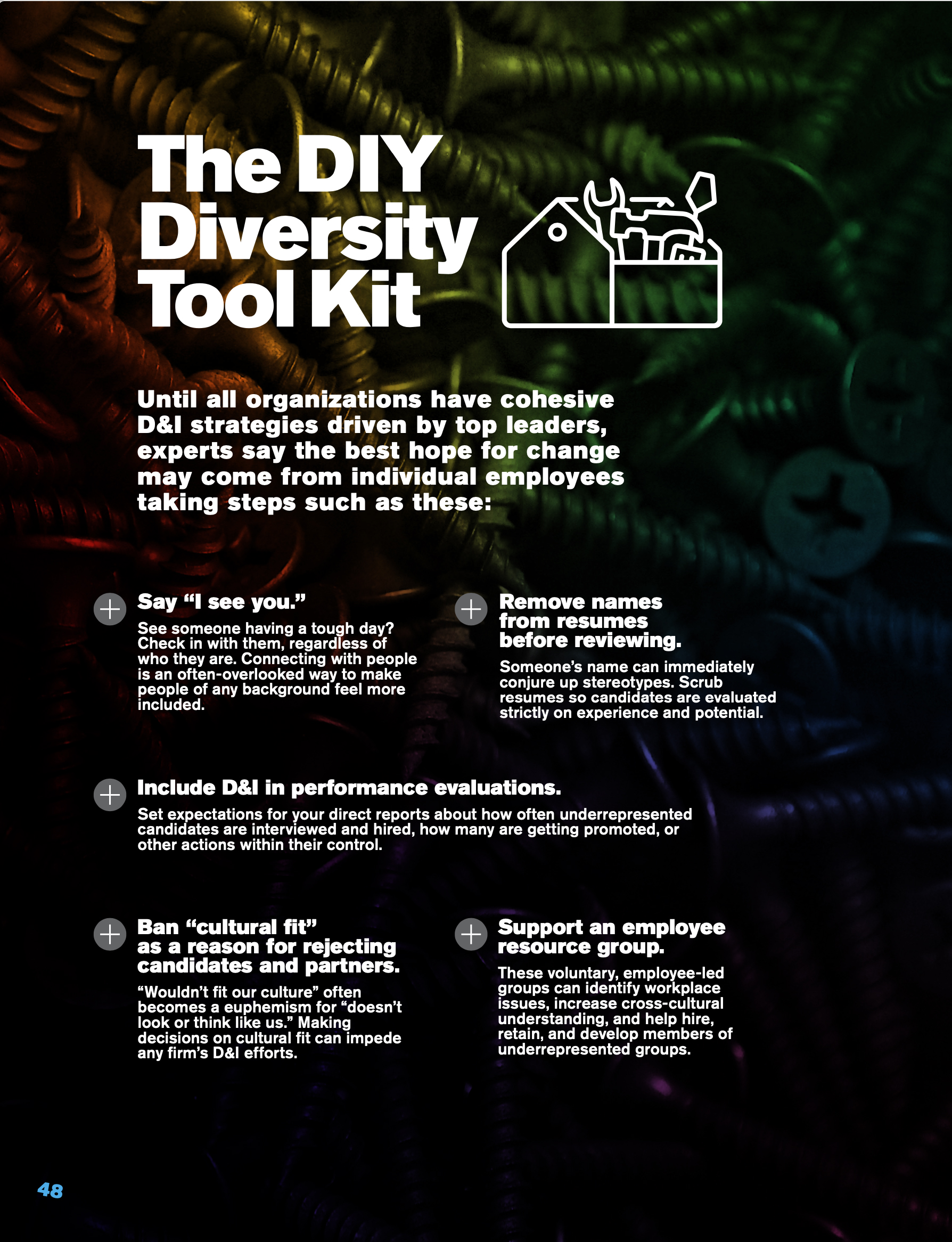 Interest in Yates’s products certainly soared, but a sales bump hasn’t come remotely close to what one might expect given those two massive tailwinds. Yates says his sales have been stymied by little-noticed corporate procurement rules, written or otherwise. Mid- and large-size organizations often require their vendors to have at least 10 years of experience or millions of dollars of global sales, automatically excluding many Black-owned businesses like Yates’s, because there are very few Black-owned businesses that can hit those requirements. Worse, Yates says, is a bias against any new vendors. “If I get the job, someone must go,” he says. Since there aren’t many Black-owned vendors to begin with, the system of exclusion perpetuates.

It’s why many mid-level managers have decided to take matters into their own hands. Forest Harper, the president and CEO of INROADS, says his phone calls have quadrupled over the last year from companies interested in setting up the types of minority internship programs his nonprofit provides. Commitments from CEOs are driving the push, he says, but often it’s the mid-level executive he is speaking with who is driving the change (the “doers,” Harper calls them). Plus, he says, there are at least two calls a day that come from mid- to senior-level executives who don’t think their firms are moving fast enough.

These DIY diversifiers aren’t always asking for outside help, either. The legal teams at companies such as Uber, Ford, and Intel have asked the law firms they’re considering hiring how many lawyers of color they employ and how many would be assigned to their work. The corporations are either not hiring or lowering their compensation to law firms that don’t show a commitment to diversity.

At a September virtual meeting of the Procurement 50, a group of top supply chain officers who collectively control more than $1 trillion of corporate purchases, members talked about how several unilaterally added Black- and minority-owned businesses to their preferred-vendor lists. “These aren’t diversity people, but they are very focused on the power of what they have,” says one executive who attended the meeting.

To be sure, many experts argue that the do-it-yourself approach to diversity and inclusion can only scratch the surface. In the past, many corporate leaders used the existence of these individual efforts at their firms as a reason that major overhauls weren’t necessary. “Most organizations are still relying on it rather than having fully cohesive strategies, unfortunately,” says Alina Polonskaia, Korn Ferry’s global leader of diversity and inclusion solutions. There are risks to going it alone, too. The efforts could backfire, angering both underrepresented employees and White workers alike. Even successful efforts can have repercussions that impact, sometimes negatively, the DIYer’s career.

Employees who don’t want to go the DIY route can still make a difference. Already, individual employees have shown support by raising their voices and demanding that their firms become more inclusive. Thanks to the high-profile protests last summer, underrepresented employees—along with their White allies—have more influence than ever before. “These groups that historically don’t have a lot of power, at this moment, have an increasing sway over some of the most powerful people on the planet,” says Andrés Tapia, Korn Ferry’s global diversity and inclusion strategist.

And if they’re so inclined, they can go as far as Match Group’s Thomas Gaissmeir. He knew his superiors were receptive to D&I efforts, but his plan to publish the firm’s employee demographics would be potentially embarrassing. The firm’s percentages of Black and Latinx employees were not great, he says. So he created a presentation for the C-suite, and the CEO signed off immediately. Now the firm will show the statistics to employees each quarter, a useful benchmark as it installs programs to hire and retain underrepresented employees. Indeed, the stats started a whole series of new conversations about what other efforts the company can try to become more inclusive. “The sheer fact that we are shining the spotlight on it is most impactful,” Gaissmeir says.