The story of what happened at the Smart Investor may sound familiar to the many who are struggling to solve the hybrid remote-worker dilemma.

Last summer, the Los Angeles–based personal finance website asked its employees to come in to the office two or three days a week and then work from home for the remainder. While everyone would be socially distanced on-site, they’d try to use the face-to-face opportunities to hold meetings and brainstorm. The rest of the time, people would work more individually, with the firm paring down meetings and other distractions.

Give the Smart Investor an A for effort, but by the beginning of this year, the company had abandoned its hybrid work model. Of course, there were issues when California imposed lockdowns, but the bigger issue turned out to be that too many workers ended up coming in only to keep to themselves. At home, meanwhile, video calls didn’t end up as limited as some had hoped, so people spent too much time in virtual meetings. Work piled up, productivity fell. “We can’t fully maintain the hybrid model,” says company founder Baruch Silverman.

To many, it sounds like an ideal post-COVID arrangement. Employees work at the traditional office part-time, connecting with colleagues, engaging with managers, and collaborating on new ideas. But they also have the autonomy to arrange their own schedules, which cuts commutes and creates more space for their personal lives. According to a Stanford University survey conducted during the thick of the pandemic, more than half of employees reported wanting some form of hybrid work model. Implementing such a schedule, however, might be one of the biggest challenges that organizations will face in the coming months. There are myriad questions to answer: Who works remotely? On what days? If some employees are never in the office, do you pay them the same as you would an in-office employee doing the same job? And how do you manage a disparate team?

On the heels of the massive overnight shift to working from home at the start of the pandemic, companies now feel pressure to facilitate yet another wholesale revolution around how business is done. Many organizations assume they have to adopt hybrid models to attract and keep top talent. They might be right—but that’s only if they can get it right. “This is an experiment that everyone is enrolled in, with or without their permission,” says Eric Anicich, a business professor at the University of Southern California.

While widespread adoption may be novel, companies have been bandying about hybrid work models for decades. Back in the 1990s, numerous companies started adding “family-friendly” benefits, flexible schedules, leaves of absence, and other options primarily geared toward helping workers balance their careers and families. But many workers believed, not unduly, that taking advantage of these benefits would jeopardize their careers.

Over the last decade, though, many leaders have come to realize that flexible arrangements allow them to attract individuals they might not have been able to when a certain job was anchored to a certain desk every day. By 2018, 70 percent of knowledge professionals worldwide were working remotely at least one day a week, according to a survey from Zug, a Switzerland-based office provider. Flexible or remote options consistently rank near the top priority among potential recruits, higher even than salary. Then COVID came along, and for all the well-documented problems that arise from blurring work and personal lives, many organizations discovered that working from home is actually doable at scale. In a January survey of 133 CEOs, board directors, and vice presidents, 83 percent said the shift to remote work has been successful at their companies. There were and still are problems, of course, but fewer than 20 percent of those executives wanted to return to the office as it was pre-pandemic. 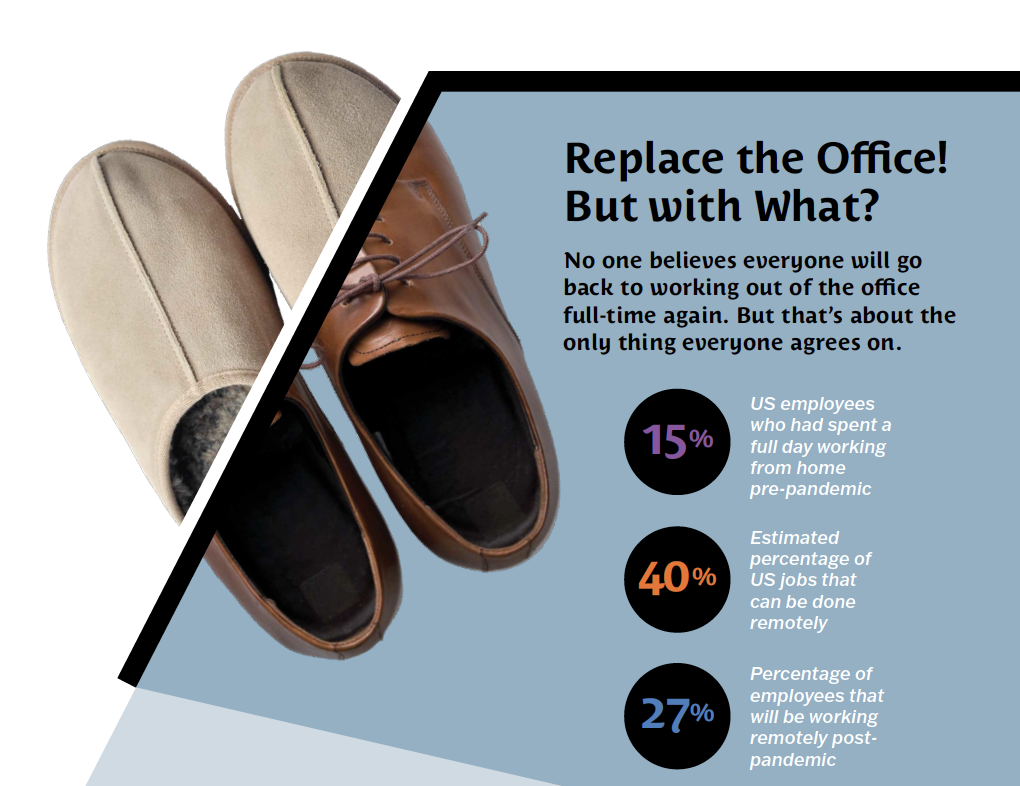 However, organizations of all sizes are finding that it’s easier to get everyone to work remotely all the time than it is to design a system that lets some of them work remotely some of the time. Unless they were already overseeing a broad, country-spanning team, for example, managers are used to working with people who are centrally located. Tracking productivity and keeping people motivated becomes much more nuanced in this new setup. Just communicating becomes an issue: How do you make requests across time zones? A phone call? Slack? Email? As it stands, many employees feel as if they must respond to everything urgently, which has already led to massive burnout. “Having access via so many communications channels is so exhausting,” says Tammy Bjelland, founder and CEO of Workplaceless, a consultancy that advises organizations on remote and hybrid work. Hybrid configurations also create a host of real estate headaches. On the surface, the change seems like a great rationale to shed a considerable expense, since less office space is needed. Companies paid about $900 billion in rent last year, even when a significant amount of that square footage went unoccupied. Assuming firms can break lengthy leases, they will then have to reconfigure what remains. Looking ahead, open floor plans just seem silly for many reasons—from empty rows to viral contagions. “You can’t just assume the space you had before will be the best for the new world,” USC’s Anicich says.

The major medical lab Quest Diagnostics is in the midst of navigating these many dilemmas. At the beginning of last year, the firm’s roughly 50,000 employees worked in more than a dozen large laboratories, a slew of smaller call centers and patient clinics nationwide, and corporate headquarters in New Jersey. “Culturally, we were an in-the-office firm,” says Cecilia McKenney, Quest’s chief human resources officer. That all changed in March 2020. The roughly 10,000 employees not directly responsible for drawing blood or analyzing tests left their desks on a Friday and started working from home the following Monday; and for the most part, they haven’t been back since. “It was an out-of-body experience,” McKenney says of the sudden shift.

In the ensuing months, the new setup helped lead the firm to enormous success in terms of scope and profit. But despite the advantages, leaders discovered that many of the 10,000 employees don’t want to be totally siphoned. In a survey of those workers about six months after going remote, Quest found that many wanted the option to meet in person a few days a week. “We have to figure out how to do hybrid,” McKenney says. 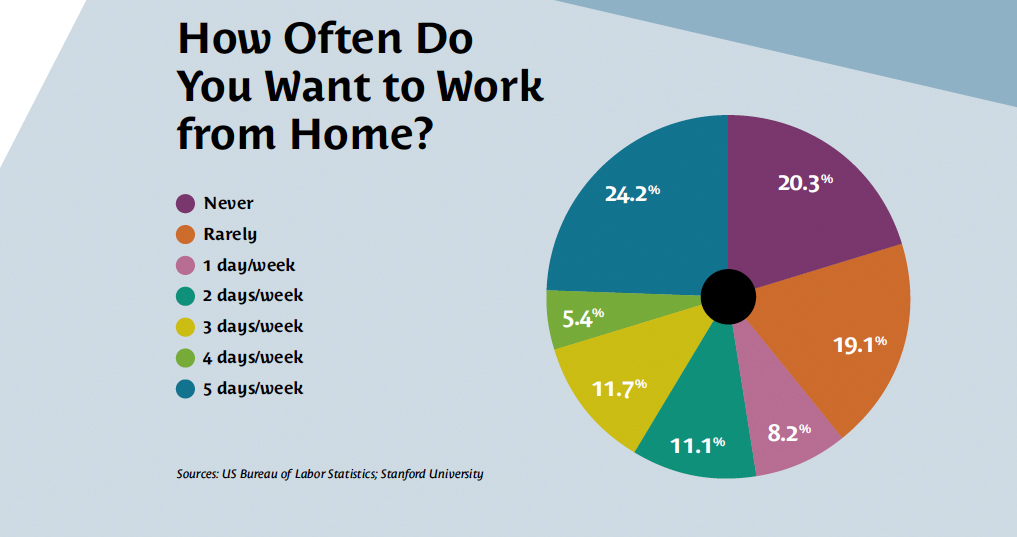 Doing so includes figuring out the issue of pay. Some companies have announced that people who opt to work permanently in a lower-cost city than where the office is located will have their salaries adjusted downward. Experts say that might be a hard sell, in part because it runs counter to the idea that everyone who has the same role and responsibilities gets paid equally. It isn’t just salaries in question, though. Quest is expanding its consumer digital team, with members based anywhere in the United States. But the company expects the team to travel routinely to a central site for in-person meetups. Who covers the costs of travel and lodging? Plus, if one of those new hybrid recruits lives in a state where Quest doesn’t currently have employees, then the company must set up a new taxable entity. “That’s a lot of work for HR, IT, and payroll,” McKenney says, adding: “That’s the price of attracting talent.”

With no easy answers, experts say that before making any plans, organizations should follow Quest’s lead and ask their employees what they want. How many days, if any, do they want to work from home? Would that be consistent week to week, or would they prefer to cluster remote workdays during a certain time of the month? Anicich also suggests collecting data on personal circumstances, such as whether workers have dependent children or are taking care of other relatives. Not everyone will want to provide this sort of information, he says, but if enough do, it increases the chances of developing a hybrid schedule that is satisfactory to a majority of employees.

Organizations should be intentional about what sort of work they prioritize when people are physically in the office. Aim to dedicate that time toward collaborative tasks, while leaving outside time for individualized projects, says Mark Royal, senior director for Korn Ferry Advisory. Meanwhile, leaders can use this opportunity to rethink what each role entails. The pandemic changed the responsibilities and skills needed for a variety of jobs, but many managers didn’t have a clear understanding of what their direct reports were doing to start with.

In the end, the complex issues associated with hybrid working may be enough for some firms to just say “everyone back to the office.” But even that line is becoming harder to take, as competitors increasingly wade into these uncharted waters. Google announced it will roll out a pilot program in the fall that allows some staff to go remote twice a week. London-based employees of the accounting firm KPMG will soon be able to spend part of their workweek at home. And Salesforce, the massive business software firm, expects that when the pandemic comes to an end, as many as two-thirds of its worldwide workforce will adopt a flexible schedule. With all the options at hand, experts say, resuming the “old” work model, circa 2019, isn’t really a likely course. “Taking all that away will be hard to justify,” Anicich says. 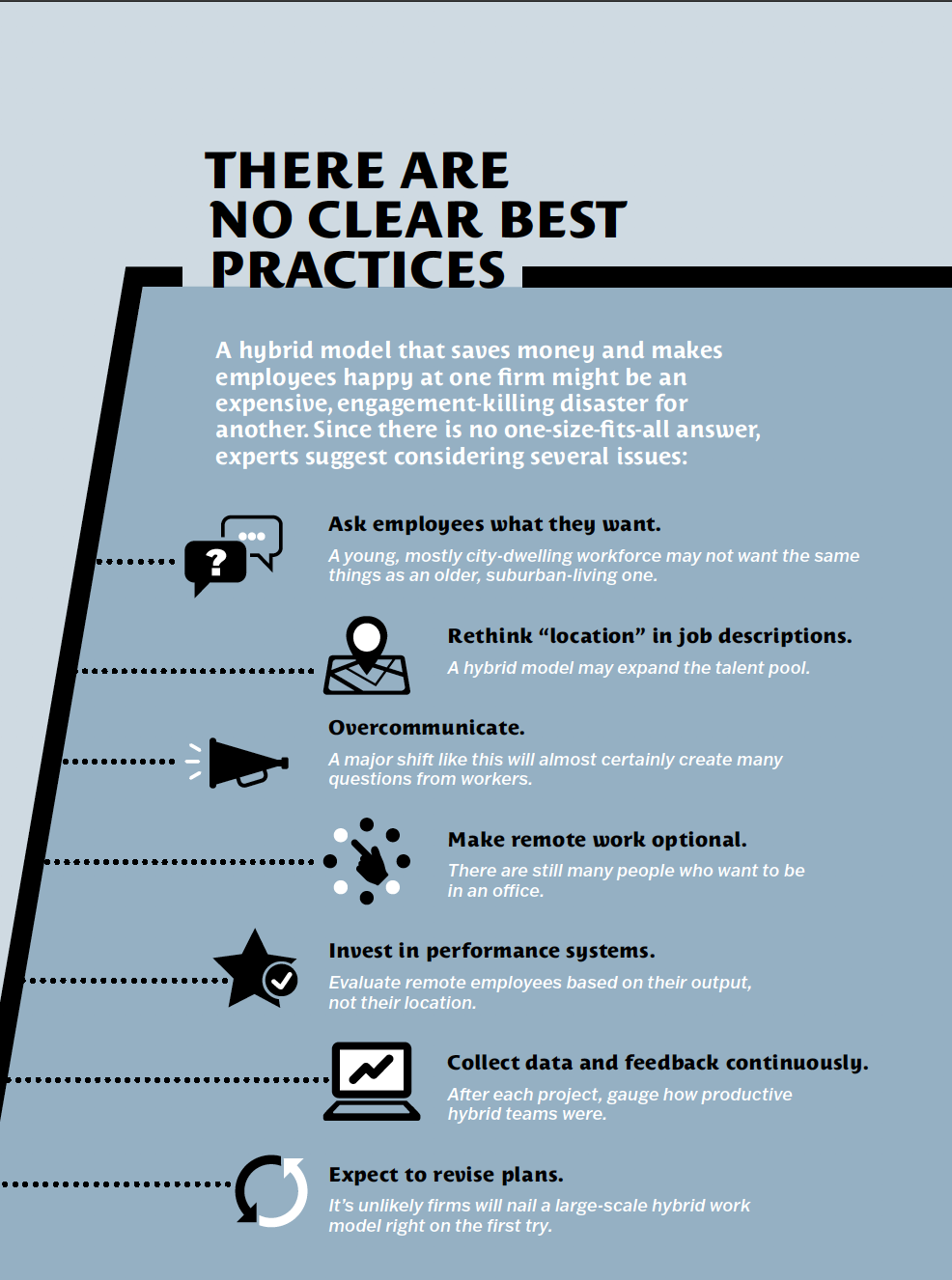