CHROs to the Rescue

Amid the urgency of the pandemic, CEOs reached out to get the right CHROs in place—even if that meant going outside their industry. Our discussions with some of the very top CHROs in the field.

Once is an anomaly. Twice is a coincidence. Three times is a trend. A half dozen times or more, however, is the making of a paradigm shift—and that’s apparently what crisis times and big movements have done to the critical role of the chief human resources officer.

Over the last year, several of the biggest and most recognizable companies in the world have appointed new CHROs who have limited experience in their new industries. While it’s tempting to dismiss the pattern as no big deal—to a degree, HR skills are industry agnostic, right?—the reality is that it is a very big deal. It isn’t common, after all, to see a CHRO move from aerospace and defense to restaurants or from a software company to a retailer. Against the backdrop of the COVID-19 pandemic and the purpose movement, the surprising new model not only reinforces the elevated importance of the CHRO function in the minds of CEOs and boards. It also opens up previously blocked pathways for C-suite talent to move into the CHRO position and from it to other operational roles, including, perhaps, CEO.

In his view, Doug Charles, president of Korn Ferry’s Americas region and global consumer operations, says the pandemic pushed and stretched the demands on CHROs in a way never before seen. “With so much on the line, CHROs showed their strategic and tactical agility,” he says. “Organizations that didn’t have the right executive in the role were exposed.”

The names of some of the organizations behind these changes certainly couldn’t be bigger—and they aren’t the kind that make such huge shifts often.

So that sent us straight to the top of the field—CHROs from McDonald’s, PepsiCo, Tyson Foods, and Walmart. They all were appointed between 2018 and 2020 and came to their new industries with limited prior experience or following a prolonged absence. The following are excerpts from our conversations. 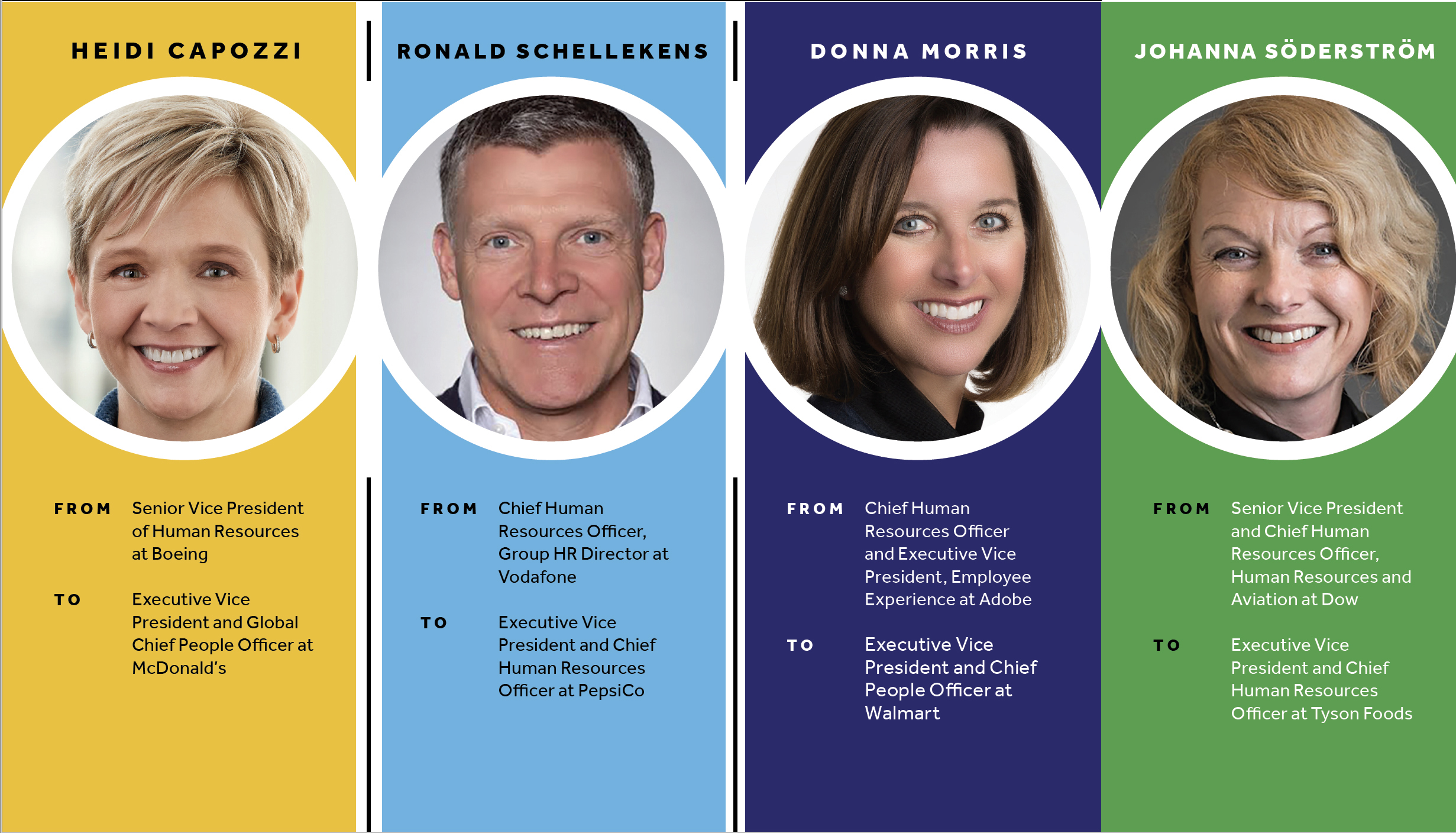 What’s behind the trend of organizations recruiting outside CHROs with limited experience in their industry?

I think there are a couple of dynamics at play. One is that current sitting CHROs demographically tend to skew older, so there are more retirement-eligible folks that could be impacting demand versus supply. Another is CEO turnover: as new CEOs seek to build their own people and culture agenda, there’s a personal element to whom they pick as CHRO. Certainly, it’s someone who shares their values and brings expertise in the areas that support their future vision.

The CEO-CHRO relationship has definitely been elevated, particularly in light of the pandemic. There’s a new and greater recognition among CEOs, executive committees, and boards of the complexity and impact of the CHRO role. We are an integral part of the business and are expected to have an opinion and provide guidance on every part of it.

I’m thrilled this trend is happening. It’s great to see so many talented CHROs transitioning into new roles and sharing their wealth of experience across industries. This allows for a fresh set of eyes and a different filter to question processes and systems. For Walmart, for instance, my two decades of experience in technology allows me to look at issues through a new lens.

Talent is increasingly being recognized as driving the transformation agenda. As a result, the CHRO role is now viewed as a transformation and growth role, and strategically minded CHROs who have built people agendas to help solve business issues and provided a competitive advantage are in demand.

Why did you decide to switch industries?

Walmart is an amazing company, and I knew it would offer the opportunity to make an incredible impact, which was so important for me. And that has absolutely been the case over this past year. The role Walmart has played to make an impact on its associates, customers, and communities around the world is second to none. While I’m proud of my 18 years at Adobe, growing the company from 3,200 employees to 25,000, and actively recruiting many senior leaders, I am excited to have this opportunity to learn about a new industry and make positive contributions to a strong company. Walmart is also a company in an industry I resonate with, bringing together my passions for both people and digital.

While food is certainly different than chemicals, there are similarities between Tyson and Dow that made it easy to switch industries. Both are manufacturing companies with massive production facilities. Both have two distinct employee cohorts—frontline workers and office employees—with different HR needs and experiences. Both are global players. I felt Tyson was a great fit for me to use my skills and experience to help the organization achieve what it has set out to accomplish with its people agenda.

What advice do you have for CHROs who come into an industry that they have been out of for a while or are unfamiliar with?

It’s one thing to bring great HR subject-matter expertise to the table, but you have to understand the industry and business to apply that expertise in the most relevant and effective way. Anyone considering a move should have a curiosity for the new and be very intentional about their onboarding. One of the first things I did when I got to McDonald’s was don a uniform and get trained up to be a crew member at one of our restaurants in Chicago. I spent over a week there making Big Mac sandwiches, working the register and the drive-through line, cleaning up. I talked to restaurant crew and got to see the day-to-day inner workings of the business.

You definitely need to get a sense of the uniqueness and rhythm of the business. The worst thing you can do is copy and paste a previous HR strategy and system to a new organization. Even though this was my second stint at PepsiCo, I had been out of the company for 16 years and had never worked in the US, so I went in very consciously saying this was like joining a new company and not the same one I left. If I used old experiences and visions of the past to interpret what PepsiCo is now, I’d set myself up for failure. The same goes for anyone entering a new industry. You need to be clear about your past experience while appreciating the uniqueness, culture, and needs of the new role and business. You may think you recognize patterns based on previous experience and rush into action faster than you should. My advice is that slightly slower and right is better than quick and wrong.

Sector matters less than cultural fit. You need to understand who you are going to work for and with. How receptive the organization and its leaders are to change directly relates to how successful you will be able to integrate and bring forward ideas. To be successful, CHROs need to develop partnerships and interpersonal connections; and if you don’t understand how you will work together with other leaders in advance, it could be a derailer.

That’s part of the challenge: balancing cultural fit with your mandate. It takes a certain amount of sensitivity and emotional intelligence to understand what the culture is enabling and hindering while also driving the changes the company hired you to make. They did hire you for your specific background and expertise. You need to understand how to use the organization and its leaders to enable change and bring people along.

Given that the issues of remote work, D&I, and employee well-being aren’t going away, how does being more visible create opportunities to elevate the role?

Last year, our team gave more news media interviews than any other function in the company, as we shared the steps we’ve been taking to protect our team members during the pandemic and what we’re doing to promote a culture of well-being and build a healthier workforce. People and purpose are now on the table in a way they never were before, and they elevate everything a company takes on because of the impact they have on communities.

The fact that our position is more public is an opportunity. Now, everyone is listening. It’s a chance for us all to step up and make more progress and a greater difference. We need to use this time to innovate around how to connect people and ideas better, particularly inside our own departments, because we can then fan that out to the rest of the organization and the wider CHRO community.

It’s no secret that CHROs have one of the shortest average C-suite tenures, and they rank at the low end on C-suite succession planning. How much does that play into the switching industries trend?

On the tenure topic, I’m actually not sure given the pace of change that it’s a good idea to have a CHRO in the job for more than a decade. I question how objective someone who has been in the seat that long can be when they built everything. If the role is a catalyst for change, that becomes hard when you are in a fixed position. I’m not sure four years is right, but I’m not sure 10 or 18 years, like I put in at Adobe, is right anymore either. Given the global demands of the role now, I’m not surprised though that an average tour of duty is three to five years.

On the succession side of the equation, we spend a lot of time helping other leaders plan succession pipelines for their functional areas. In reality, CHRO succession should be a model for how it is done in other positions. We should be using ourselves to experiment and pilot ideas to improve succession management.

There’s no question that boards and CEOs are turning to CHROs to help them drive the business agenda. And if they don’t have the right person in the role to do that, they are going to go out and get the right person, which plays into the tenure and succession issues. No matter the industry, certain aspects of the role are always transferable. What companies are looking for are CHROs who can establish deliverables around an organization and people agenda to meet their business priorities.

As CHROs now become more accountable for delivering on a business agenda, does that open a path to the CEO position?

I could see a path opening up sometime in the future depending on your career path and experience. We are at a point in time where CHROs are expected to step up and lead in a broader space than before. With purpose, culture, strategy, and other people agenda topics becoming part of everyday C-suite conversations, CHROs are core business enablers and value creators.

Although HR is more integrated with the business and plays a much larger role, I don’t think we are quite at that point yet. I think there’s a value to moving HR executives into operating roles so that they can understand other elements of the business and to be on the receiving end of HR policies and practices and see what has an impact and what doesn’t. But when it comes to most CEO roles, it’s critical to have a deep understanding of the consumer and how to run end-to-end businesses at scale.

I’ll put it this way, the function has a lot of runway to make a sustainable impact on an organization, whether as CHROs or in another leadership position.