After four decades in financial services and a cancer scare, Jeffery Rose planned to retire last year. Then the pandemic hit. Suddenly the 66-year-old vice president and principal credit examiner, who oversees a $4.5 billion commercial lending portfolio for Amegy Bank, a Zion Bancorp subsidiary, didn’t have a daily commute. He no longer had to put on a suit or contend with airport security lines. “I wasn’t interested in all the trappings that go along with going into the office every day,” says Rose. “The ability to work from home made it easy to stay on.”

Purely by demographics, the 2020s should be the decade when one generation passes the reins to the next—with millions of boomers approaching the time to hit the beaches. But along came COVID-19, and now quite a few executives are delaying their goodbyes, discovering that in the work-from-anywhere era, their roles aren’t quite so grueling. True, many high rankers report increased stress since the pandemic, but what’s not to like about hanging with family more, skipping hours in traffic, and in some cases becoming more valuable to firms? “Remote work gives older workers more choice, especially for those on the fence about retirement,” says Bill Castellano, a former human resources executive and a professor at Rutgers University’s School of Management and Labor Relations.

The problem is, there’s another, very eager generation waiting for their turn at the table. While much has been written about how the pandemic forced an estimated 4 million older employees into voluntary and involuntary early retirement, studies show younger generations bore the brunt of layoffs and job eliminations, much like during the Great Recession a decade prior. And now, with the eldest occupiers of upper management, executive, and C-suite positions delaying their final exit, Gen Xers and millennials may be impacted even further.

It isn’t just a bummer for eager corporate climbers. Organizations have been feeling the age bloat for years as life expectancy lengthens and people scramble to amass greater savings to cover the extra few trips around the sun. Since 2000, the labor force participation rate has grown 23 percent among those age 60 to 64 and 42 percent for those 65 to 74. Roughly one-quarter of all management positions are currently occupied by leaders 55 or older, a number experts expect to grow.

Pandemic aside, says Castellano, companies are in an awkward position as they attempt to reshape their teams to keep pace with the ongoing digital transformation without pushing veteran leadership out the door on the way. The past year only accelerated and exacerbated their dilemma. “There is no doubt that blocking the leadership pipeline by individuals delaying retirement is a succession challenge for organizations,” says Joseph McCabe, vice chairman of Korn Ferry’s Global Human Resources Center of Expertise. 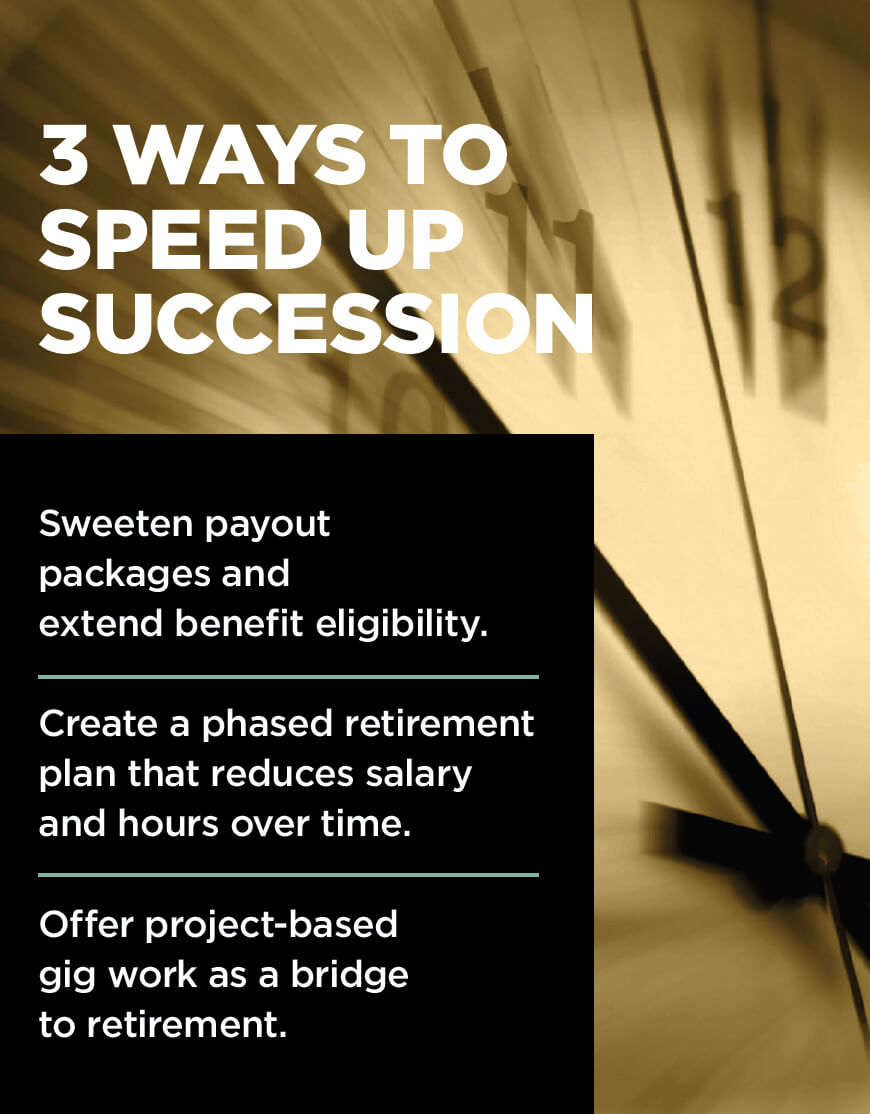 Solutions to such problems are never easy. Some proactive organizations are upping their retirement packages with lucrative payouts and extended benefit eligibility. Others are utilizing phased retirement plans, where hours and salary are reduced over time, or transitioning older workers into contract or project-based work as a bridge to retirement.

There’s also another solution: do nothing. After all, not everyone agrees that the AARP crowd is impeding the progress of youthful ambition. The idea that Gen Xers and millennials are being stymied assumes a static number of job opportunities, says Anqi Chen, associate director of savings research at the Center for Retirement Research at Boston College. In a properly functioning economy, she says, “more growth equates to more jobs, which equates to more leadership opportunities for everyone.” Chen’s research shows that during times of uncertainty—like the current one—the institutional knowledge and experience that veteran workers possess is particularly relevant.

For his part, Rose, the financial services exec, is grooming a junior colleague to take over for him when he eventually retires—and says he doesn’t feel guilty about delaying the transfer. “The department will be hard-pressed to replace 44 years of experience,” he says.