As business travel takes off, not all workers are on board.

Airport security lines are suddenly snaking back to their former reaches, and the coveted A1 seat has returned to unicorn status. Even airline CEOs, who didn’t anticipate corporate travel to resume in a meaningful way until the second half of 2021, were taken by surprise when bookings began hitting records in March. It’s official: business travel is back—and along with it an ethical quagmire that firms must now wade through.

As vaccinations become more widespread, pressure is mounting for workers to book that red-eye. A Korn Ferry survey shows that while the majority are looking forward to traveling on the job again, a significant number are apprehensive. Nearly one-quarter of professionals say that even with widespread vaccinations, they’d be afraid to travel. Another consumer study found that among those older than 55, that number jumps to three-quarters. Then there’s the cohort that just doesn’t think it’s worth the hassle anymore. But if succeeding in your role relies on face-to-face meetings, is working from home really an option?

Corporate travel is usually one of the first industries to recover from global interruptions because of the perceived value it generates, experts say. The quantitative forecaster Oxford Economics reports that companies reap $12.50 in incremental revenue for every $1 invested in business travel. “It can take 20 emails, 10 phone calls, or five videoconferences to replace one hour of face-to-face,” says Niklas Andréen, president of traveler experience at the travel management firm CWT. Many workers echo that belief. According to the Korn Ferry survey, nearly two-thirds say they’re more effective when allowed to travel, and even more say in-person meetings create better long-term relationships. “Business travel has been an integral part of how they form strong ties and how they get the job done,” says Sarah Jensen Clayton, leader of Korn Ferry’s Culture and Change capability in North America.

As with so many equations in business, though, COVID-19 changed the corporate calculus. Travel managers now must answer a slew of highly charged (and litigious) questions: Have travelers—and family members—been vaccinated? Does the client feel comfortable with the risk, and have they agreed to mutual safety procedures? Is there a policy to purchase an extra seat between passengers? Is the company prepared to enforce local quarantine ordinances, which can extend beyond a week? Add to that the ethical dilemma that no shot is 100 percent effective, and that the dangers of emerging variants and the longevity of immunity remain unclear. Some medical experts say it may be two years before the full efficacy of vaccinations is understood. Firms need a plan for how to handle promoting those who choose to resume travel versus those who don’t (particularly since older people and residents of wealthy nations were the first to get vaccinated, creating an unfair advantage). 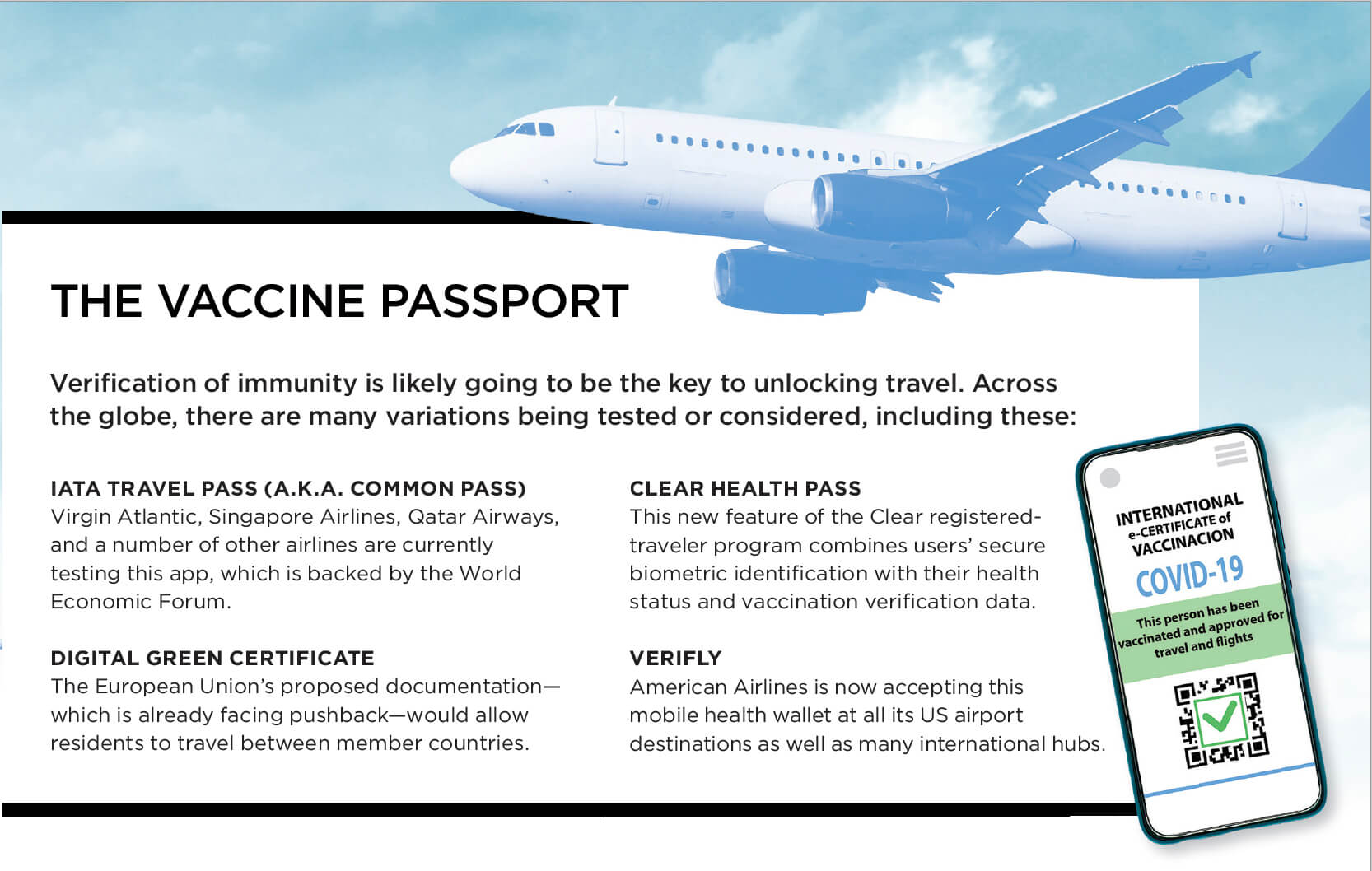 As companies have learned to secure results in the absence of in-person face time, some are opting to keep travel lean and focused, instead prioritizing making the most of every jaunt. “The attitudes of corporations and travelers alike toward travel and risk have changed, perhaps irrevocably,” says Andréen. Maybe salespeople travel to close a deal but not for routine meetings. Meanwhile, executives accustomed to being on the road for four days out of seven might consider empowering local managers to handle remote work.

Optics matter here too. Leaders may be inadvertently sending subtle messages that competitors are visiting clients. Naturally, workers are likely to fear falling behind, missing out on the deal or a promotion. Even just seeing their CEO jump on a plane for a face-to-face meeting may subtly put pressure on employees to do the same. “Leaders will set the example,” says Brian Bloom, Korn Ferry’s vice president of global benefits. “How they return to travel will set the tone for how others return to travel.”