Bitcoin for luxury suites. A LeBron James dunk for nearly $400,000. Why are pro sports way ahead of the game in digital transformation?

While most people are looking forward to the Labor Day holiday, Steve Ehrlich is focused on the weekend before. That’s when the Oakland A’s host the New York Yankees for the first time this season. Ehrlich is a die-hard Pinstripes fan, relishing a rivalry that dates back to the days when the A’s were a dynasty of their own. Come game time, Ehrlich says, he and a half dozen of his friends and clients will be sitting in his luxury suite along the third-base line.

But Ehrlich is more than just an adamant baseball fan. He also happens to run a cryptocurrency brokerage. So when he heard the A’s were moving to a new, more high-tech means of selling tickets, he put his credit card away—and nabbed the $64,000 suite with Bitcoin.

The team refers to their unusual ticket-selling plan as part of a “digitally progressive” platform. In the corporate lexicon, this is more commonly called “digital transformation.” Whatever name it goes by, it’s clear that while most multinationals continue to struggle to move forward digitally, one corner of the world is way ahead of the game: pro sports.

Over the past decade, companies in one industry after another have spent hundreds of millions of dollars trying to transition brick-and-mortar operations to e-commerce and the cloud. They’ve created chief digital officers, chief information officers, chief technology officers, and other C-suite roles. They’ve invested heavily in data and ana­lytics and remade their workforces with engineers, software developers, and specialists in emerging technologies like artificial intelligence and virtual reality. Yet for all their progress, many companies and industries are still far behind the technological curve.

Sports, however, have teleported ahead. Whether it’s MLB or the NBA, the NFL, or Premier League soccer, sports teams and leagues have adapted to the digital world faster than a Jacob deGrom fastball. The A’s are already moving on from selling tickets with digital currency to exploring ways to use it for sponsorships and ads. Over in the NBA, nonfungible digital tokens (NFTs) are being used to create and authenticate original digital memorabilia, with a LeBron James dunk, for example, selling for nearly $400,000. While other industries barely recognize NFTs as legitimate, the NBA has created a $500 million market out of them in less than a year.  It’s all “scoring big points with fans,” says Sascha Schmidt, a professor of sports and management and the editor of 21st Century Sports: How Technologies Will Change Sports in the Digital Age. “No question, other industries could learn from how sports has stayed ahead of the game in technology.”

“We want to be where our young fans are and be available to them in any way they want.”

Part of the nature of sports is taking risks, of course, and teams have a bit more freedom to experiment than, say, a global conglomerate. Teams aren’t going to lose too many fans—or millions of dollars—because their app flops, for instance. Still, teams or even leagues that are worth hundreds of billions of dollars remain surprisingly bold in their willingness to disrupt their core products, something few other companies of such size have tackled. For many, it raises one obvious question: Why sports?

Sports teams and leagues have adapted to the digital world faster than a Jacob deGrom fastball.

Of all businesses, you could argue that sports should have been the last to launch a digital transformation. It’s steeped in nostalgia and tradition. It took more than a century for Major League Baseball to break its two major leagues into divisions, for instance. For its part, while three-point shots dominate the National Basketball Association today, the league only allowed them in 1979, more than three decades after its formation. “Fans are mostly traditionalists, and their general position is not to change the game—the game is sacred,” says Schmidt.

But it was those very fans who may have helped trigger the dawn of the digital age in competition. (Not to mention the athletes themselves, who have long relied on new tech to train and rehab—see “Robo-Athletes.”) In customer-loss numbers that few industries have seen, fans began to turn their backs on professional sports—in person and on TV—toward the end of the 20th century. The decline has been remarkably steady and across most sports in younger age groups, with about 20 million fewer fans 18 to 34 years old watching last year’s Super Bowl, the crown jewel of US events, compared to 10 years ago. According to Marc Ganis, whose firm Sportscorp Ltd. advises and negotiates stadium, licensing, and other financing deals, the declines could have a major impact on sports’ core revenue source: TV contracts. “There’s concern about what will happen with the next round of contracts,” he says.

In the face of such blows, many industries have neither the resources nor the top-tier interest to find digital solutions. But sports teams turned straight to their young and digitally savvy fan base for answers. “We want to be where our young fans are and be available to them in any way they want,” says Mark Cuban, the business- and tech-savvy owner of basketball’s Dallas Mavericks. “We can’t wait for them to come to us; they may not get there. We have to go to them.” He says creating and maintaining the emotional connection between teams and fans is a critical responsibility for owners. Fans want more access and greater insight into the players and teams they root for, and digital media is the primary way to provide those connections.

Cuban was an early internet pioneer—he sold Broadcast.com in 1999 in one of the first huge internet deals—and is just one of a growing number of team owners who have recently come into sports from the tech world. That roster includes big names such as Steve Ballmer, a cofounder of Microsoft, and Joe Tsai, formerly of Alibaba. As Jed Hughes, a Korn Ferry vice chairman and the firm’s global sector leader for sports, sees it, these influencers are helping drive the digital transformation engine. “They’re savvy enough to experiment and invest with tech innovations to edge out their peers,” he says.

LeBron James gets the pass at the top of the three-point line, dribbling once before jumping in the air, windmilling the ball as he soars for a spectacular reverse dunk. It’s February 2020, about a month before the pandemic hit the US, and in the past such a play would be printed as a poster, sold by the millions to young fans, and hung in kids’ bedrooms around the world. Now, however, it’s rendered as a digital collectible authenticated by NFTs and sold via digital currencies like Bitcoin. It comes in the form of a virtual 3D cube, with different faces showing the final score, James’s jersey number, and, of course, the play itself in a constant loop. Only 59 of them were made, and in April one sold for nearly $400,000.

Though they’ve been around since 2015, the potential for NFTs to monetize intellectual property and create new avenues of innovation only began to blossom last year. The NBA, as usual, led the way, with the formation of NBA Top Shot, a joint venture between the league, its players association, and the digital design firm Dapper Labs. What began as a tiny experiment exploded in the wake of the pandemic, as fans who were unable to attend games sought something more than SportsCenter highlights or YouTube clips to fill the void. “I’m a huge NBA nerd,” says Steve Veerman, an NBA Top Shot collector and Toronto Raptors fanatic. “This gave me both a new hobby and a way to socialize with other fans from all over the world about the games.” 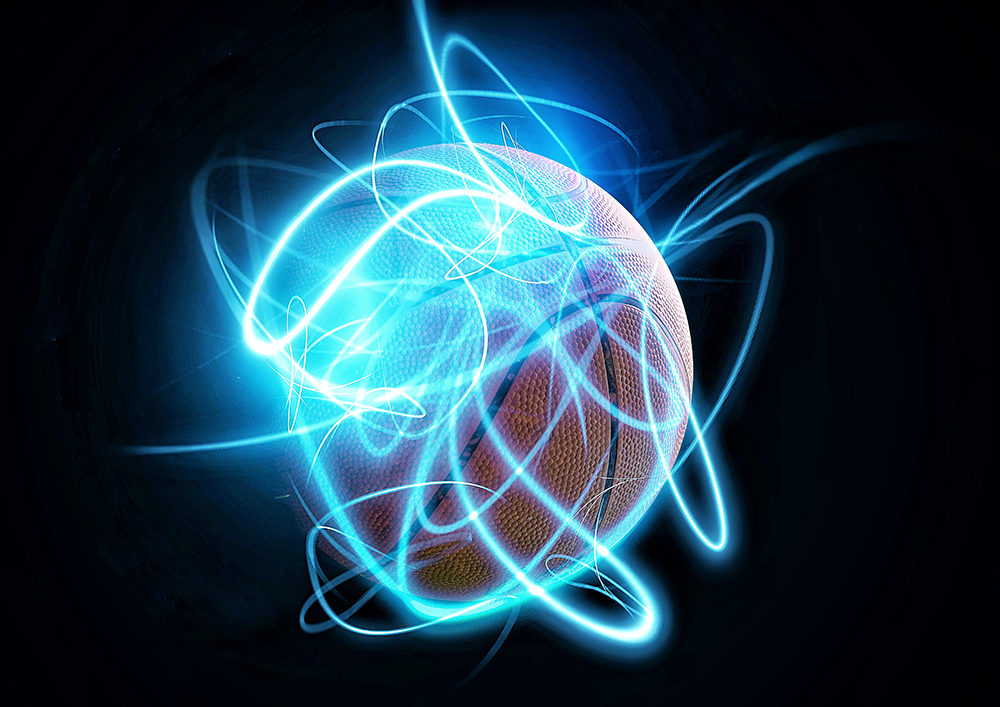 Unlike Bitcoin, NFTs aren’t a currency. Rather, they are digital certificates that verify the authenticity and ownership of an asset and assign value to it for buying, selling, or trading. The token acts as a digital record, tracking transfers from one user to the next and triggering payment. Unlike digital currencies, where the value of each individual coin is equal, the value of a given NFT varies based on its uniqueness.

Think of NBA Top Shot as a digital parallel to trading cards, except you can put your entire collection in your pocket. “Moments,” as the clips are officially dubbed, can be bought individually or in packs, ranging from less than $10 to more than $200. Owners also buy, sell, and trade them among each other. Each time the license is transferred, the NBA gets a cut of the revenue. “The license from the league is what turns it from a regular play or clip into something that could be a very big deal,” says Veerman.

He should know. Veerman, who started collecting NBA Top Shot moments after selling his physical basketball cards, now ranks as one of the platform’s top 10 collectors, owning about 12,000 rare NFTs valued at a total of $8.4 million. He says the marketplace is exploding so fast that it won’t be long before the record sale for the LeBron James dunk is broken. In fact, he believes there are clips currently in existence that could sell for a million dollars or more. Furthering the trading-card analogy, Veerman says a single copy of a truly rare NFT—say the shot that crowns a new NBA all-time scoring leader—in the future could end up being as rare and as prized as a Mickey Mantle rookie card (which recently sold for a record $5.2 million).

It’s that rare, once-in-a-lifetime, have-to-see-it-to-believe-it element of sports that makes NFTs so promising. Owners view them as a key way to get fans back into the stadium, which is the ultimate aim of all these technology experiments anyway. Dave Kaval, president of the A’s—the same team that sells tickets via Bitcoin—imagines fans being in the stands for a no-hitter, or even better a perfect game, and getting an NFT of the last out as a giveaway that they can buy, sell, collect, and trade. “What a way to bring together technology, the fan experience, and new revenue streams,” Kaval says.