For eight years, from the birth of her oldest son, Paulina Hudson maintained the balancing act—raising her kids and working as an analyst at a commercial airline. But when the pandemic hit, just as for many women, the weight of responsibility became too much: Hudson quit. When her elementary-school-age kids go back to the classroom in August, the 40-year-old will join millions of other women on the hunt for a new job. And what’s top of mind for Hudson? She worries employers may see the gap as a red flag, proof that she couldn’t maintain. “I’m always going to be looked at as a woman in the workforce,” she says.

As more of the Western population becomes fully vaccinated and kids prepare to return to the classroom full-time, both women and companies are coping with a harsh reality—the need to rebuild decades of gender-divided career gains that the pandemic erased. With the share of women in the labor force at its lowest in 30 years, some experts estimate it will take several years for women to reach pre-COVID employment levels. Others fear it will take far longer. But getting women back to work is only the beginning; the real question is whether leaders can restructure the arrangement so women no longer have to serve as employees and social safety nets. “This is definitely a moment of reckoning,” says Mona Zanhour, an assistant professor of human resources management at California State University, Long Beach. “We need to change the rules of the game.”

"I’m always going to be looked at as a woman in the workforce."

So how did we end up with this exodus of women workers? Nearly double the number of women compared to men worked part-time at the onset of the pandemic. (The vast majority—84 percent—of those women worked fewer hours for noneconomic reasons, such as taking care of family.) Women were also more likely to work in vulnerable industries, such as travel, leisure and hospitality, and domestic services, or in job tracks that lack critical P&L responsibility. A 2019 Korn Ferry analysis of the 1,000 most profitable US companies found that women accounted for only 12 percent of chief financial officers, compared to 55 percent of chief human resources officers. Then there’s the reality that women—including breadwinners—are still expected to carry the bulk of the domestic load, which the COVID outbreak only magnified. “It was only a matter of time before it finally caught up to us,” says Evelyn Orr, senior vice president and chief operating officer of the Korn Ferry Institute. 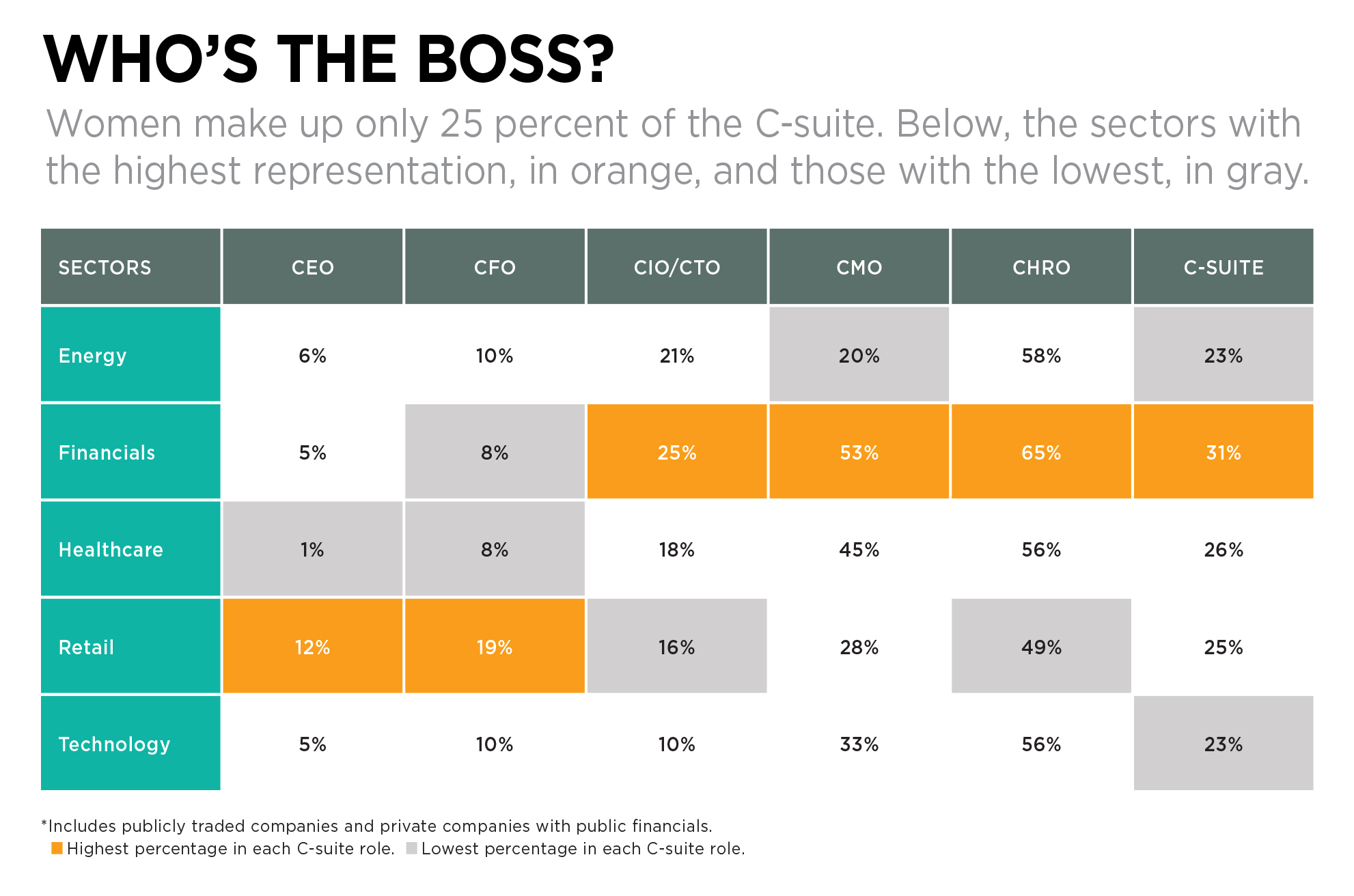 The solution, of course, is multifold, requiring both systemic change and buy-in from women, but experts say that companies have an outsize impact on influencing the trajectory of gender equality. Zanhour and other experts see the disruption as an opportunity: for women to move into more revenue-generating roles, to transition from part-time to full-time, to have the autonomy to make their own schedules. In the UK, data shows women are flocking to entrepreneurship. “The thing that brings women the most flexibility is when they are the boss,” says Orr. Meanwhile, a LinkedIn poll from earlier this year showed that 80 percent of women seeking work in the US are now willing to switch industries or functions—a 10 percent uptick from women surveyed last fall. Some might want to pivot, experts say, because they recognize that the sectors most affected by the pandemic are becoming obsolete. Others may want to work for companies that allow a better balance between job and family responsibilities.

Firms can make it easier and more appealing for women to make lateral moves, says Dana Sumpter, an associate business professor at Pepperdine University. In the short term, this means making the workplace human-centered, not task-focused. Build in flexibility, prioritize outcomes over face time, and offer benefits that reflect the realities women face (meaning access to no-cost childcare, meal preparation, laundry services, and so on). Longer term, it means creating much more robust pipelines into a variety of industries and professions (if there isn’t a significant representation of women on the sales floor or construction site, experts say, that’s a reflection of leadership failure).

To be sure, not all women want to change course. One in four women, other studies have found, are still considering leaving the workforce or downshifting their careers (versus one in five men). Many have spent the last year with their children and don’t want to return to rigid schedules or long hours away. Others aren’t in a position to negotiate.