It’s been 10 years since the government-backed solar start-up Solyndra went up in flames. Was it worth it?

It was a play on the future of solar power. But it was more than that. It was a bet on Silicon Valley innovation, on the role of public-private partnership, on an economic rebound, and on a green jobs revolution. (Déjà vu, anyone?) And then, just two years into what was supposed to be a multibillion-dollar government investment in renewable energy, that bet went bust.

The 2011 collapse of Solyndra still reverberates today, a decade after the Bay Area solar start-up defaulted on a first-of-its-kind government-backed loan. The company laid off more than 1,000 workers and filed for bankruptcy, leaving American taxpayers on the hook for more than $500 million. “Solyndra is a prime example of the perils that come when the federal government plays investor,” one scathing Congressional report wrote. But now, three presidents and a revived movement toward clean energy later, some are asking: Was it really such a bad bet?

The Solyndra affair grew out of a government loan-guarantee program enacted in 2005 under President George W. Bush designed to support early-stage research into renewable-energy sectors, an unsure industry that struggled to secure traditional bank loans and venture funding. The 2009 stimulus bill expanded the program, and later that same year, Solyndra became the first company to tap into the new funding mechanism, signing $535 million in loan guarantees.

"Like so many stories of irrational exuberance, the problems arose when the math didn’t meet the vision."

But Solyndra wasn’t producing just another flat, boring solar panel. The founder, tech veteran Chris Gronet, had created a novel, thin-film cylindrical design that was not only much lighter and easier to install but could also capture more sunlight when placed on flat residential and commercial rooftops than typical panels. Investors were enamored, and nearly a billion dollars of venture funding poured into the glass-walled Fremont headquarters. “They have the potential to become the next great energy company,” Anup Jacob, a partner in Richard Branson’s Virgin Green Fund, told reporters in 2008. Nicolas Gourvitch, of the financial advisory firm Green Giraffe Energy Bankers, called the technology “groundbreaking.”

Like so many stories of irrational exuberance, the problems arose when the math didn’t meet the vision. Sure, a dramatic drop in the price of polysilicon caused Solyndra to lose its market advantage, and skyrocketing solar production in China drove down the cost of foreign-made cells, but an inspector general report also concluded that Solyndra’s leaders engaged in a “pattern of false and misleading assertions.” (The company denied the allegations, and the Department of Justice declined to press any charges.) In one example, the firm claimed to have contracts worth $2.2 billion, while in reality, investigators said, the company was offering price-wary customers deep discounts that eroded profitability. At the same time, government loan processors under pressure to make moves, the report said, failed to perform the necessary due diligence. 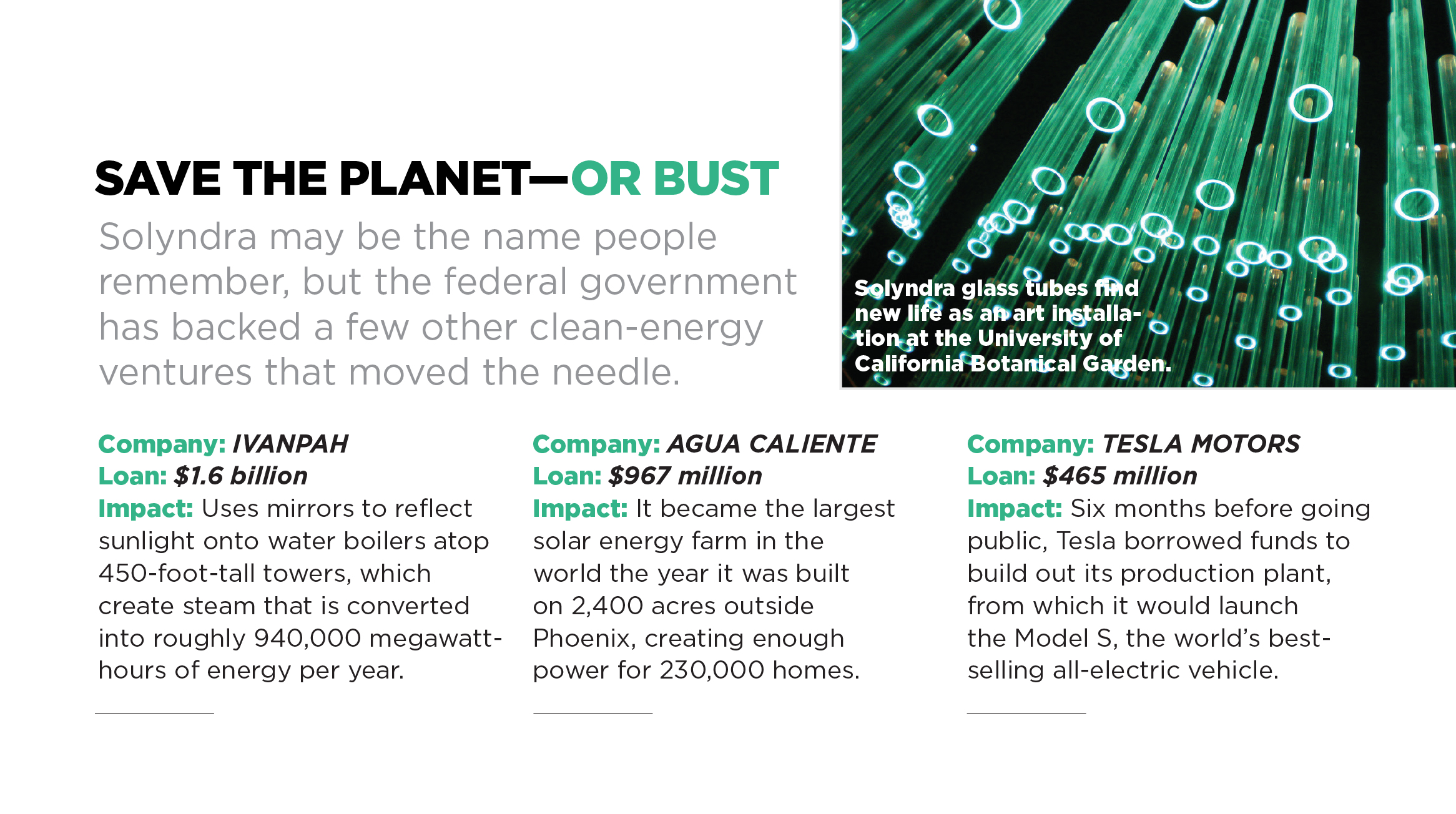 The Solyndra scandal has been scrutinized from every angle. One bankruptcy-law case study concluded: “Solyndra will likely be remembered as a cautionary tale of how taxpayer dollars were wasted when the government made financial investments based on political considerations.” However, for all the hoopla surrounding Solyndra, it wasn’t the only—or the biggest—bet that the Energy Department placed. In all, the program has issued loans and guarantees of about $32 billion to dozens of climate- and energy-related projects, and in most cases, those bets paid off handsomely. In fact, its loss rate of less than 3 percent is well below most venture funding benchmarks. Additionally, DOE projects interest on its loans to generate some $5 billion for American taxpayers.

Included in those recipients happened to be another little-known Fremont start-up: Tesla. The automaker repaid its government loan within three years. Not all bets are created equal. “Nine out of 10 start-ups fail,” says Mark Jacobson, a senior fellow at Stanford University’s Woods Institute for the Environment. “Solyndra did make some advances that were then used by other companies.” And so, for now, the quest to fight climate change in style continues on.