Turns out that CEOs are just as susceptible to irrational decision-making as the rest of us.

If you had asked him in the past, the chief executive of a life sciences firm would have told you he has an average tolerance for risk. But that was before he took a personality assessment. As it turns out, his propensity for risk-taking was in the 90th percentile compared to the overall population. That penchant for adrenaline may have contributed to the avid marathoner’s personal and professional success, but it also made him susceptible to impulsive business decisions, which at his level could have disastrous impacts.

CEOs tend to be extensively experienced, highly educated, and ultra successful. The common sentiment, of course, is that they’re more measured and rational than the common person. “There is this idea that because they know how to run a business, they make really good decisions all the time,” says Marius Guenzel, an assistant professor of finance at the Wharton School. Yet a growing body of research, including multiple studies by Guenzel and associates, suggests that top bosses are just as vulnerable to rash decision-making as the rest of us, bolstering the theory that traits or biases are not correlated to education or experience level but rather are hardwired into the human operating system.

The difference is, a CEO’s partiality can have monumental implications. And after years of attributing success to their own talent and failure to external factors, “CEOs tend to overestimate themselves,” says Stu Crandell, global leader for Korn Ferry’s CEO and Executive Assessment practice. Having worked with hundreds of leaders, Crandell says he has seen this play out time and again. Take the sunk-cost fallacy, which happens when you resist changing course purely because you’ve invested time, energy, or money into a project or journey. People commonly do this, for example, when they end up hating a film at the movie theater but don’t leave, because, well, they’ve already paid to see it. When a CEO is motivated by loss aversion, though, the stakes go from a wasted couple of hours to entire livelihoods. Common leadership traits—notably confidence, or in many cases overconfidence—can amplify sunk costs, Guenzel says. 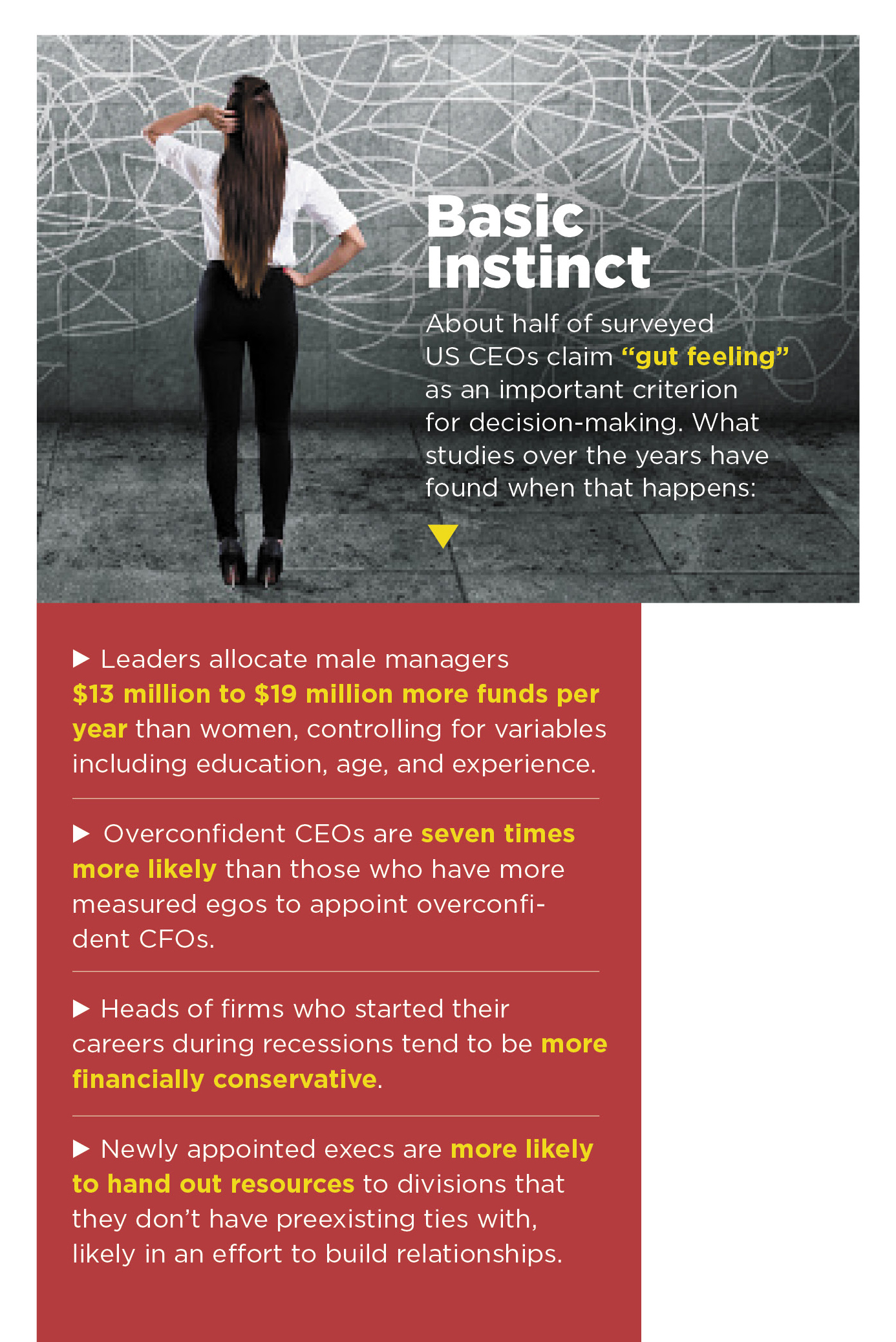 Generally, in the messy, complex realm of corporate finance, it’s difficult to draw a causal relationship between executive bias and real-world impacts. However, researchers have recently identified an exception: mergers and acquisitions. Bullish executives, new studies suggest, often grow emotionally attached to acquisition targets, priming them to overpay and even engage in bidding wars. If the deal goes south, the sheer size of the investment keeps them struggling to fix something that is irredeemable. It can take years for a firm to accept that it’s made a bad decision and offload the acquisition to stem mounting losses. (Hello, sunk costs!) Sure enough, after a takeover announcement, the acquiring company’s stock value typically falls.

So how can leaders use this understanding to make more sound decisions? Self-awareness is an obvious but overlooked starting point. That can be achieved through personality assessments or other tests that help leaders understand their wiring, including their personal proclivities. From there, they can build teams that have a counteracting effect. A risk-taking CEO can mitigate impulsive investments by working with a more cautious CFO, for example. But given that executives overindex on confidence—a trait that can make it hard to self-administer external limits—Guenzel recommends more radical measures, such as moving authority from a single leader to a group. Involving multiple people, including an outside observer who is detached from internal emotions and politics, forces the company to validate assumptions that would otherwise go unchallenged, he says.

And that’s just good business. After all, biases are not a reflection of inadequacy. They’re a marker of humanity—and in an era when that is becoming the ultimate measurement of leadership, perhaps there’s no better time than now to embrace individual foibles.