The Struggle to Move On

Forget competitors and talent wars. Leaders say they’re more consumed than ever by everything but operations.

The CEO wanted to devote the week to making decisions on how to adjust her company’s operations as the world’s economies soften. Instead, she had multiple meetings about the firm’s yet-to-be-finalized flexible-schedule policy. Another day was spent answering questions about which political candidates the organization would donate to, and why. Adjusting healthcare policies in light of recent Supreme Court rulings took up another two days. Finally, there was the earnings call to prepare for.

So much for time to make critical business decisions.

It’s not as if leaders haven’t always been deluged with demands for their attention. “Three years ago wasn’t the beginning of distractions,” says J.R. Klein, coauthor of the new book Global Business in the Age of Destruction and Distraction. But before COVID-19, senior leaders’ biggest distractions were pretty much the same as other professionals’: emails, micromanaging, information overload, and social-media scrolling. And meetings, especially—too many meetings. The average leader spends around 25 hours each week in meetings, twice as much as in the 1960s.

But it’s not only those outside disruptions that take up a leader’s time. It’s also the topics of many of those disruptions. It’s endless debates about where and when employees should work, how to respond to new state-level laws, and whether to get involved in social causes. And all this is only going to get worse, Klein says. “These disruptions are highly corrosive, personally and organizationally. They’re drivers of physical and emotional distress.” Since 2020, as these new, noncore issues have come to the fore, the level of self-reported burnout among people managers has risen considerably, from 28 percent to 35 percent, according to one survey.

However critical these new time sinks may be, an increasing number of experts say they are drawing attention away from other, even more critical priorities. That’s especially true with today’s tough economic conditions. “The goal is to make a decision and move on,” says Dan Kaplan, senior client partner in Korn Ferry’s Chief Human Resources Officers practice.

Among the biggest C-suite and management-level distractions, the debate over remote versus hybrid work reigns supreme. Hammering out this policy can be complex. A multinational organization might have thousands of roles across dozens of countries. Plus, employers initially feared that the wrong decision on remote work could lead to a mass exodus of employees. But the issues that first arose during COVID three years ago need resolutions. If executives are still debating hybrid schedules, experts worry, they may not be managing their teams or strategizing about how to navigate the new era of higher inflation and lower growth.

Topics like these are so sticky, in part, because of the fatigue of the past three years. Most executives and employees expected to see a remodeled workplace around the third quarter of 2020. As for issues around corporate activism, experts say, many organizations made these a top priority in the summer of 2020, around the time of George Floyd’s murder. But two years later, leaders are endlessly rehashing every single issue, every single time, rather than adopting a consistent policy.

It’s OK for big decisions to take time, experts say—but not to the point where they take up huge swaths of a leader’s day. Address them quickly and thoroughly. Be transparent with stakeholders about what is being decided and why. Assign subordinates to monitor the situation, and make necessary, data-driven adjustments. “Issues are distracting if you let them be distracting,” Klein says.

That might require leaders to adopt a different mindset. These noncore issues aren’t existential, business-shattering threats; they’re simply problems to be solved. Leaders might have to change their opinions. They might have to change long-standing policies. They might even have to reimagine their companies to some degree. But that’s what agile, best-in-class organizations do. 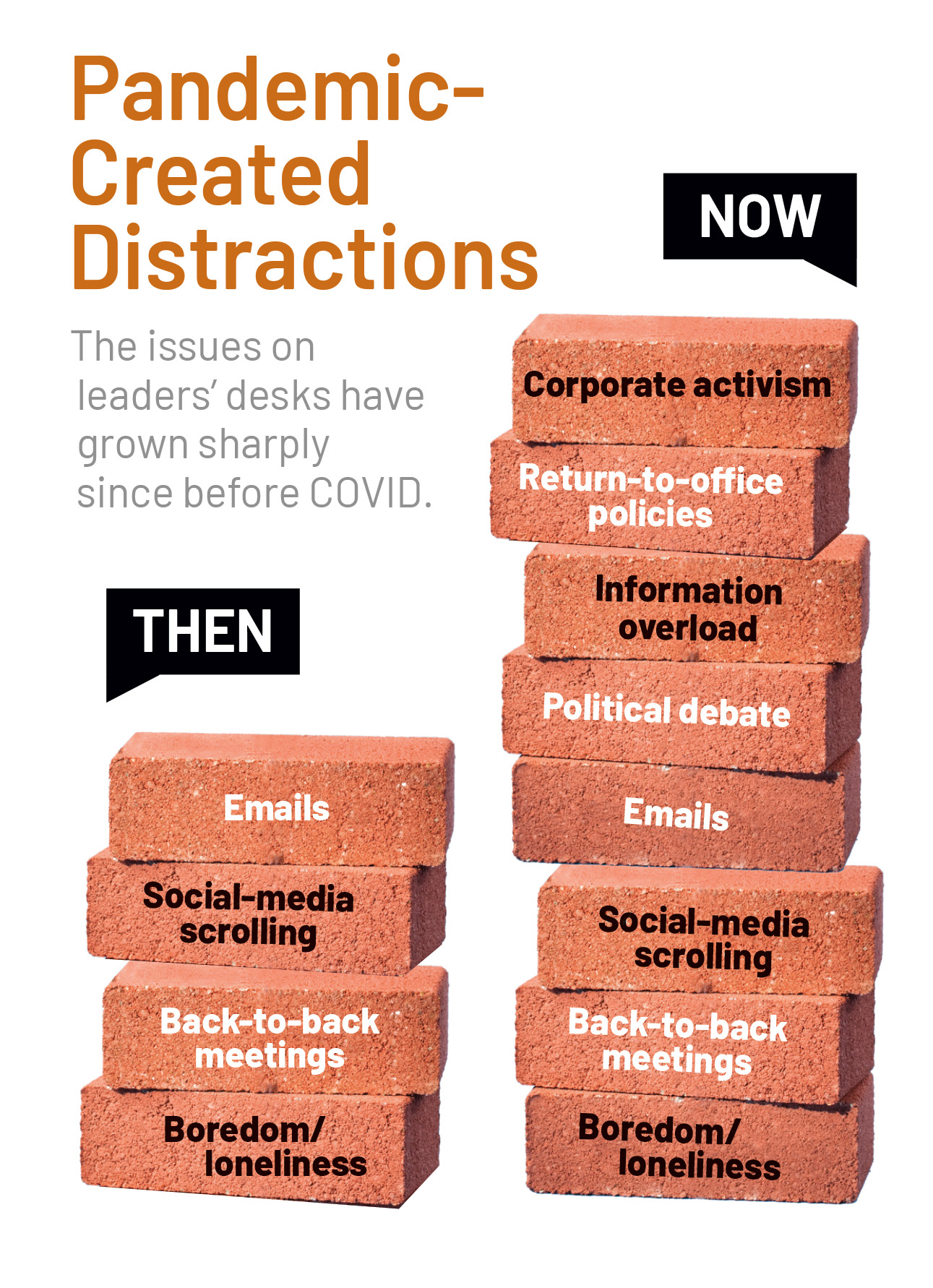