Chatter Bots: ‘The Spiral of Misery’

Despite enormous frustrations for consumers and corporations alike, data scientists believe new uses of chatbots are on the horizon. Our look at 7 that promise not to drive people crazy.

For the last few weeks, Victor has been reviewing hundreds of pages of transcripts of conversations with bank customers who made inquiries about credit cards. He’s trying to figure out why these requests, out of the thousands of others the bank received, weren’t converted into applications and new business. At the same point in every interaction, he notices, the customer gets frustrated and ends the conversation. But Victor, it turns out, isn’t a call-center manager, and he isn’t reviewing conversations with a customer-service representative. He’s a data scientist looking at interactions between customers and the bank’s chatbot.

Each day, millions of people will come into contact with a chatbot—a technology that tries to mimic human conversation, frequently through texts. We all know the drill: the chatbot asks how it can help, but often offers too few choices and provides no option for human assistance. Despite their growing ubiquity, chatbots are still regarded as one of the most frustrating corners of the artificial-intelligence and machine-learning world. The industry even has a name for the headaches chatbots create: “the spiral of misery.” Or as Brian Manusama, a former Gartner AI analyst and current chief strategy officer at digital-communications company CM.com, more diplomatically puts it, “Chatbots are struggling to meet the expectations of consumers and corporations.”

“Chatbots are struggling to meet the expectations of consumers and corporations.”

But that hasn’t slowed their momentum at all. During the global COVID pandemic, the volume of customer-service calls increased by as much as 300 percent in some industries. Today, companies are investing more resources than ever into developing and deploying chatbots. According to Gartner, nearly half of all organizations will use chatbots for customer care in the next couple of years, up from about 23 percent now. Estimates suggest that the market for chatbots will exceed $3 billion worldwide by 2025. Indeed, experts are hoping that the technology may—emphasis on “may”—soon reach a tipping point where it transitions from the ultimate digital annoyance to a fast and convenient problem-solver for consumers and a revenue generator for corporations. “Companies are pushing the boundaries of what’s possible,” says Rashid Khan, cofounder and chief product officer of Yellow.ai, an artificial-intelligence company that has deployed more than 1,000 chatbots for organizations in banking, insurance, government, energy, and other industries.

Right now, as anyone using them knows, the functionality of chatbots is limited to common questions with predictable answers. The technology is great at handling simple tasks like telling a bank customer their account balance or serving up a link to a company’s travel policy. But chatbots aren’t so great at answering open-ended questions. Ask a chatbot what options are available to change an airline flight or how to alter the investments in a 401(k), and the spiral of misery begins.

Making interactions with chatbots more dynamic—and less scripted—is a major focus of investment. But what’s on the horizon? Will anything change soon? We spoke with leaders in the field and came away with a few surprises (ever hear of a chatbot with feelings?) as we glimpsed into what a different chatbot world may look like. 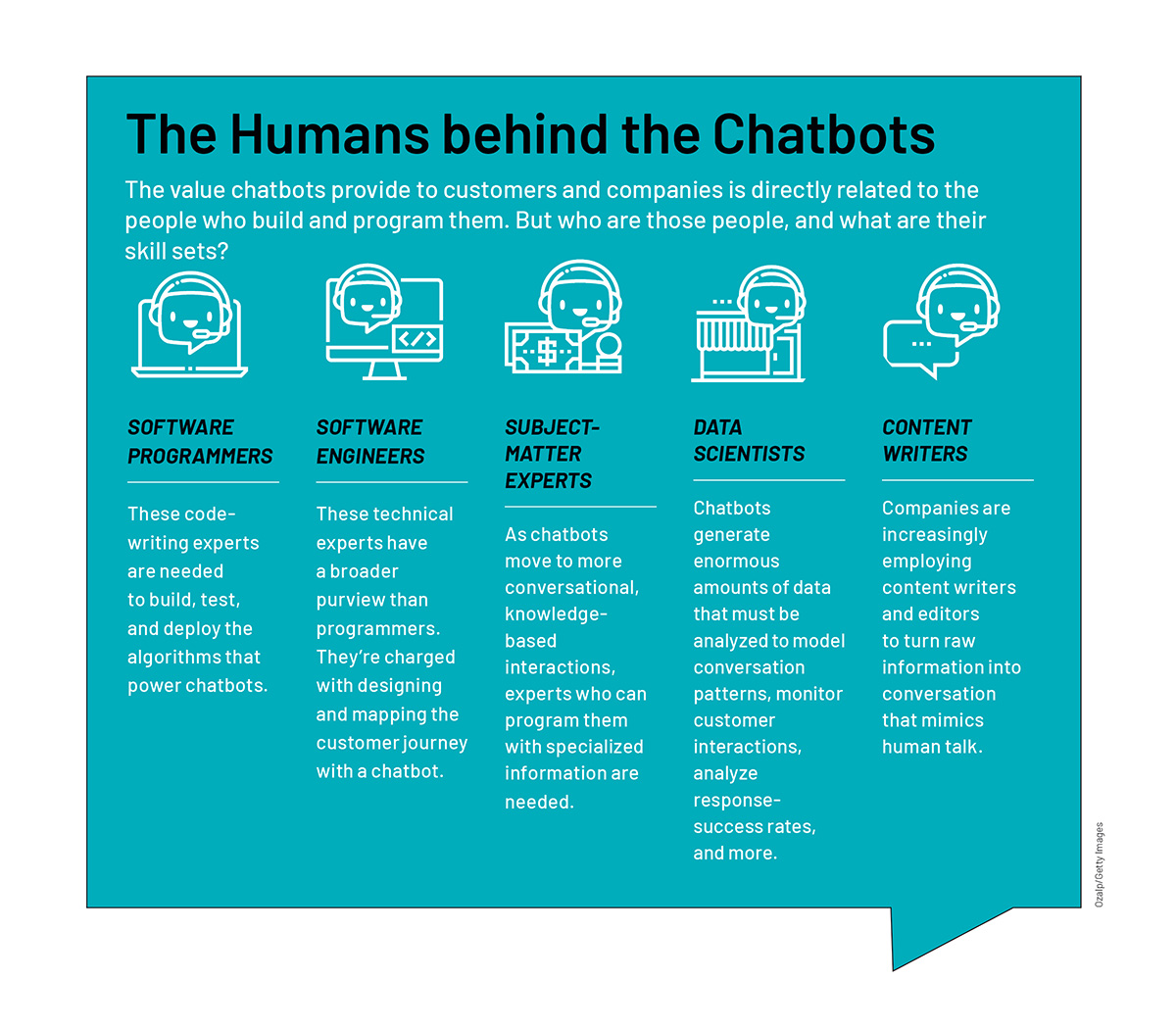 As anyone with Siri or an Alexa can attest, misunderstood requests and difficulty with conversational nuance are among the biggest headaches consumers have with chatbots. The issue is navigating dialogue—easy for humans, less so for machines, despite years of efforts. But hope may be on the way: experts say advances in processing natural language and conversation are on the horizon. These would enable chatbots to break away from stilted language and conduct productive humanlike interactions. “Consumers increasingly don’t care if they are talking to a bot or a human, so long as it provides the answers they need in a timely manner,” says Chris Cantarella, global sector leader for software at Korn Ferry. The technology is still rudimentary at this point, but experts predict that within three to five years, voice-enabled bot technology will replace the current system—typing into a text box and waiting for a reply—and become the dominant form of customer service at most organizations. In fact, Juniper Research predicts that there will be 8 billion voice-assisted devices in use by 2023.

Getting in Touch with Their Feelings

A Google engineer recently set off a major debate in the tech world by claiming his company’s LaMDA AI system had feelings. The claim was widely debunked, however, and the engineer was subsequently fired.

While nobody believes chatbots are sentient, the ability to decipher the emotions and intent of users—known in industry parlance as sentiment analysis—is a major area of research and development. Chatbots today are increasingly capable of telling whether a user is satisfied with how the interaction is going. Using a green/yellow/red signaling system, chatbots can monitor conversations and tailor responses to meet the customer’s emotions, says CM’s Manusama. “If interactions are going south, the bot can hand off the customer to a supervisor or manager,” he says.

Sentiment analysis will become a real game changer for companies once bots can determine not just how a customer is feeling, but what exactly they are asking for, says Daniel Faggella, CEO at Emerj Artificial Intelligence Research. “Are they asking for a refund or trying to cancel service?” he asks. Once a chatbot can figure out a customer’s intent, it can determine the best way to satisfy it.

Finding the information a customer is looking for is only part of the equation. How it’s served up is the larger part of creating a satisfying user experience. Should chatbots be used to answer detailed questions about mortgage terms, for instance? And if so, what is the most efficient method—sending a link to a lengthy document, or having a subject-matter expert program the algorithm to address specific terms and conditions?

Until recently, companies hadn’t paid that much attention to how chatbots deliver the information customers request. “Companies are struggling to figure out what knowledge to transfer to customers via chatbot and the best way to communicate that knowledge,” Emerj’s Faggella says. Companies are analyzing customers’ most common questions and most frequent actions on digital channels to decipher how to present that knowledge in the most concise, conversational, efficient manner, as well as when it makes more sense to deploy a chatbot instead of a human representative.

By far the most common reason companies use chatbots is economic. Estimates suggest chatbots can save companies as much as 50 percent on customer-support costs. For a telecommunications company or insurance provider with massive call-center operations, this can amount to tens of millions of dollars per year.

Only recently, however, have leaders awakened to the fact that chatbots can be effective revenue generators as well. During the pandemic, for instance, companies started using chatbots to push out information to loyal customers on sales and special promotions via text messages and social media. Retailers routinely use chatbots on their e-commerce channels to direct shoppers to similar or complementary purchases. “Chatbots are one of the best tools for upselling and cross-selling new products and services,” says Yellow.ai’s Khan. As an example, he cites a cable-company chatbot that first resolves a customer’s internet-access issue, then provides offers for faster speeds or bundled services. Khan warns that companies need to tread carefully, though. Failing to solve a customer’s issue while simultaneously trying to sell them on something else won’t win any new fans, he says. 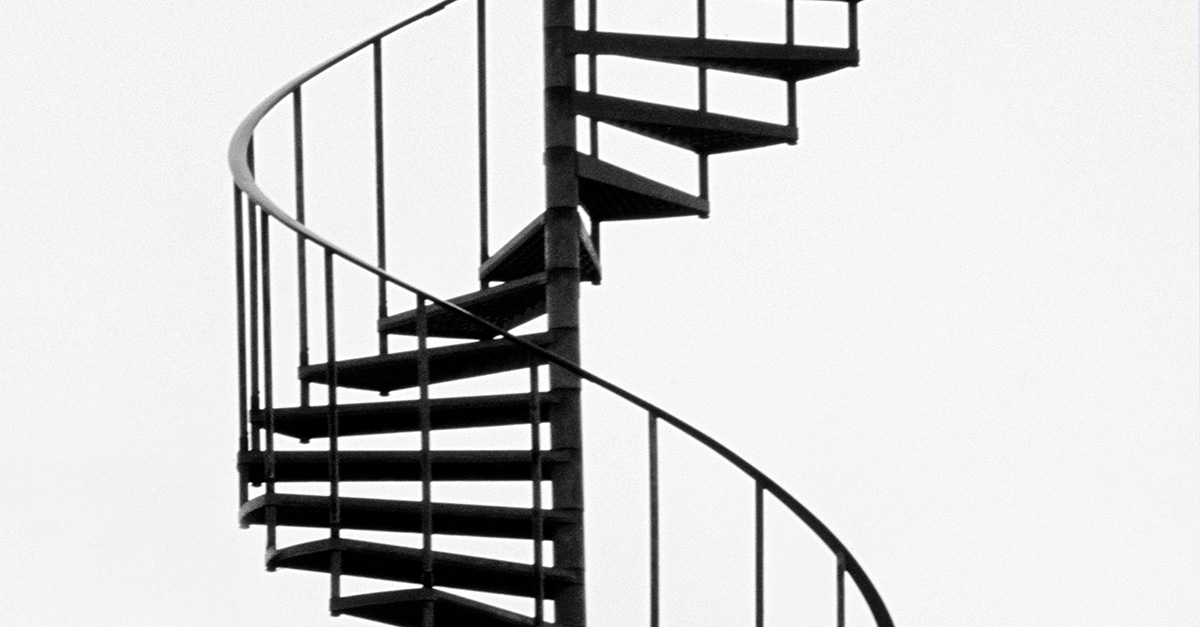 In addition to answering questions, chatbots can direct consumers to products, fill their carts, and even tally their bills. But these interactions stop at the checkout line. The ability to collect payment via chatbot is limited. Data and privacy concerns are part of the reason direct payment has yet to take off. But companies are increasingly working with providers like PayPal and Stripe to solve this problem.

The ability to pay using a chatbot is something both customers and companies want. For companies, chatbots can act as knowledgeable sales agents while also cutting down on costs. For customers, the ability to find and pay for what they want in one seamless interaction saves time and improves the overall experience. Korn Ferry’s Cantarella says customers view such functionality in chatbots as table stakes nowadays: “The customer experience is everything, and the value chatbots create for customers is very transient.”

One of the fastest-growing areas in the use of chatbots is in human resources. For many companies, chatbots are already the first point of interaction for job candidates and new hires, whether it’s asking prescreening questions and scheduling interviews or providing onboarding documents and even conducting performance reviews.

The use of chatbots in human resources is becoming more and more sophisticated, says Korn Ferry’s Cantarella. The technology is increasingly being deployed to answer employee questions about benefits, to book travel, to handle training and development, and to gauge engagement and productivity. “The data collected by chatbots can alert CHROs to what is happening around such things as retention or productivity before they become issues,” says Cantarella.

Critics question whether chatbots actually provide employees with a better user experience, however. Using a chatbot to dispatch reams of onboarding documents and a first-day schedule to a new employee could come off as impersonal and send the wrong message about the company culture, for instance. Moreover, there is a fine line between using chatbots to generate insights about employees and violating privacy or rights. To be sure, AI-powered recruiting algorithms have come under fire in the past for racial and gender bias. “There is still a significant spook factor around the use of chatbots in human resources,” says Emerj’s Faggella.

In the post-pandemic remote-work environment, maintaining employee productivity is top of mind for leaders, and many are turning to chatbots for help. According to research firm Gartner, 70 percent of white-collar workers already interact with chatbots in the workplace. For instance, instead of using IT to grant access to certain applications, companies are now experimenting with deploying chatbots to automate and respond to access requests, says Yellow.ai’s Khan. Chatbots are also being used to analyze emails, Gchats, and Teams messages to determine their criticality. They can alert employees if they need to respond immediately and even schedule time with the appropriate contact, if necessary.