From live video shopping to virtual storefronts in the metaverse, a transformation is underway in online retail.

When Bloomingdale’s held one of its early live shopping video streams, it wasn’t just an opportunity for audiences to hear Jimmy Choo’s creative director discuss the company’s latest styles and inspirations. Those who signed up in advance received a package containing cocktails and macarons to accompany the experience. There’s more.

During the event itself, viewers could inquire in the social feed about fit and feel; they could even ask for suggestions—which the host responded to in real time—about working with the color palette. It was much like interacting with an associate on the sales floor—if that sales associate also happens to oversee the design of the product. For those ready to buy, there was no standing in line. The purchase link was readily accessible on-screen. There’s more.

The first 50 people to buy a pair of Jimmy Choos during or immediately after the livestream received a personalized fashion sketch. Not ready to check out? Those who watched through to the end were entered into a drawing to win other goodies.

Live video shopping, sometimes called live commerce, is meant to feel more experiential  than simply a sale or a marketing ad. It facilitates interaction and personalization. The most effective iterations evoke the senses, including touch, taste, and smell, in ways that mimic real-world encounters. In the case of luxury retail—say, buying a six-figure car—live commerce often looks like an intimate one-on-one exchange. All of which may feel novel, maybe even gimmicky, to the Western shopper, but in other areas of the world, this mode of online retail is quickly becoming the standard. 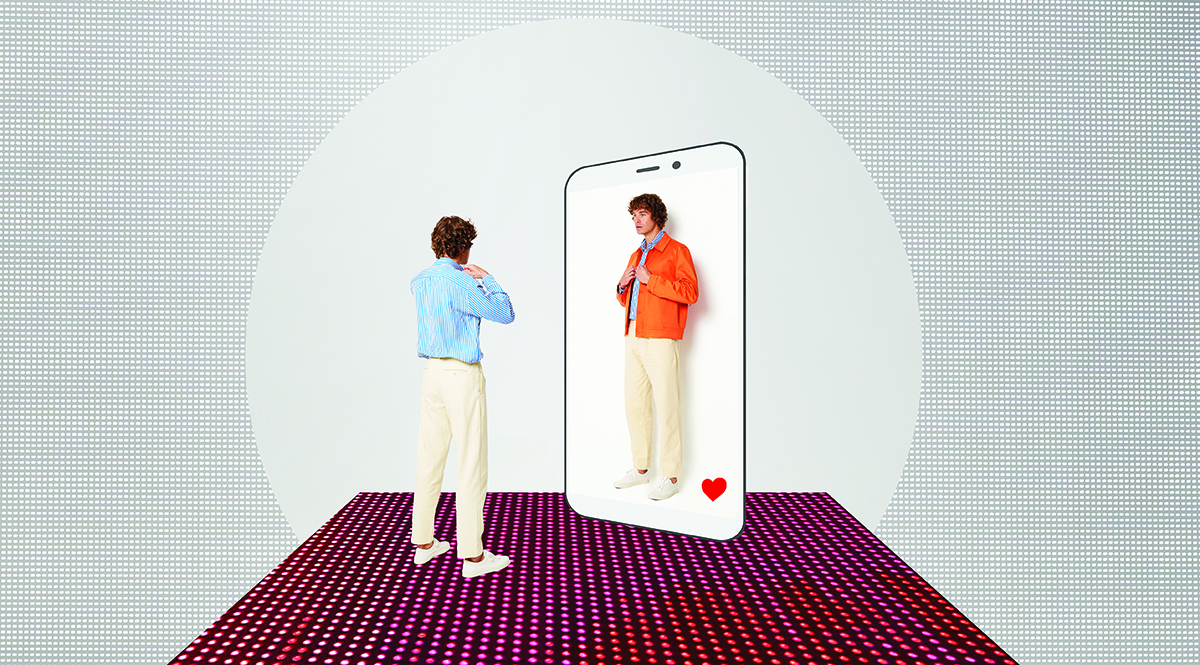 Live video shopping took off in earnest in China in 2018; today it accounts for more than 10 percent of the online retail market and generates tens of billions of dollars a year. Some estimates suggest that by 2026 it could represent as much as 20 percent of global virtual sales. The live-commerce trend, though, is only one expression of a larger shift toward finding innovative, seamless ways to bridge the lonely and sterile gap between offline and online shopping. The latest highlight of this came during Fashion Week in September when Bloomingdale’s announced it will celebrate its 150-year anniversary with the launch of a virtual store in the highly anticipated metaverse.

In 2021, e-commerce sales totaled $870 billion in the US, a 14 percent increase over 2020 and a 50 percent increase over 2019. Digital purchases represented 13 percent of all retail sales. While significant, that figure is dwarfed by China’s, where almost 25 percent of total retail sales were made online. The reason for that, experts say, is the digital infrastructure that Chinese retailers have constructed, featuring storefronts, social feeds, gaming capabilities, and payment systems that are all embedded into singular platforms. If the East is any indication, converting the masses to digital shopping will hinge on creating more immersive retail ecosystems. Enter the metaverse, a world built on blockchain and fueled by cryptocurrencies, whose greatest aspiration is a more fulfilling virtual reality. Where the internet ushered in the e-commerce era, the metaverse will inaugurate the age of immersive commerce, or i-commerce. (Of course, behind the pixelated curtain, what the technological utopia aspires to is the accumulation of still more customer data.)

“With brick-and-mortar, consumers get to shop with all five senses,” says Phillip Adcock, a behavioral science retail consultant. With the internet, he says, retail has been all wrong from the beginning. “It’s the equivalent of shopping from a giant spreadsheet,” he says. “The metaverse is an attempt to try again.” 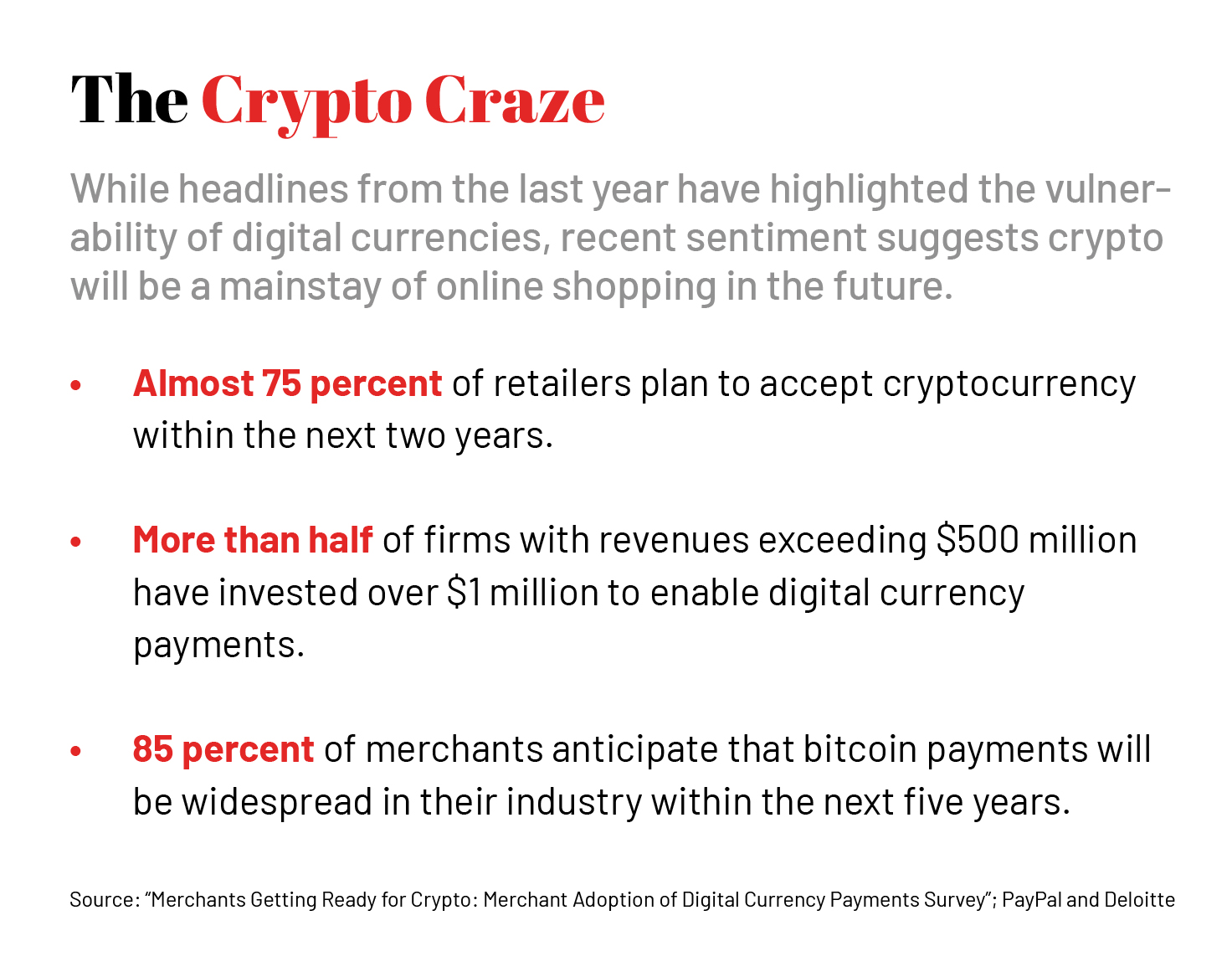 Before the industrial revolution, retail was made to order. As personalized as it gets. When factories and assembly lines came along, it became less personalized, but more affordable. With the internet, consumers traded the sensory experience of shopping for accessibility and choice. Eventually, through social media and online reviews, customers began to have more and more say over product development. Still, buying online was slow to catch on. Though it began in the mid-90s, digital retail didn’t go mainstream in the West until more than two decades later.

Then, the pandemic. Between March 2020 and April 2020, digital sales in the US jumped almost 50 percent. By the end of the year, 8,700 brick-and-mortar stores closed. “The e-commerce world was put on steroids,” says Craig Rowley, a Korn Ferry senior client partner. And no place bulked up its online marketplace like China, which now accounts for more than 50 percent of all global online retail sales. And what has been China’s secret sauce? Immersion, which is what the metaverse promises. In the West, Google is used to search, Facebook to socialize, Amazon to shop, PayPal to make payments. In China, all of these capabilities are combined into sprawling platforms that track users’ every move, giving companies far more consumer data—so much so that in certain sectors, a reverse supply chain, known as consumer-to-manufacturer, has emerged.

Today, the more adventurous—and resourced—companies are attempting to create their own full-service offerings, trusting that it’s only a matter of time before the masses abandon sentimental notions of privacy and skepticism about virtual reality goes the way of cable television. The early days of social media were met with a similar resistance. Brands had to be convinced, usually by the success of rivals, to fully dive into Facebook, YouTube, and, most recently, TikTok. As with so many of today’s cutting-edge possibilities, the crude technology already exists. What’s lacking is appetite, regulation, and trust. “The difference with this technological innovation is there isn’t a question of if it will last or not,” says Justin W. Hochberg, CEO and cofounder of Virtual Brand Group, which designs, builds, and operates consumer experiences in the metaverse. “All of the technology used in the metaverse has been out there being used for years, just not by mainstream Western countries.”

Older generations tend to think of the metaverse as little more than a cartoonish web platform that Gen Zers play video games on. In fact, a recent survey found 55 percent of adults with yearly incomes over $100,000 are not at all interested in the metaverse. What they don’t understand is that the game has changed quite a bit since the days of Super Mario Bros. Fortnite, the free multiplayer game played by 271 million people in 2021, is a world, not just a contest. It’s much more about hanging out than about winning. It’s the new mall.

The metaverse is essentially a 3D cybergalaxy that allows people to create and interact in real time. Incorporating the most cutting-edge technologies, including augmented and virtual reality, nonfungible tokens, cryptocurrency, and blockchain, it’s a place to play, work, and shop. But unlike users of other platforms, those in the metaverse—which is entirely decentralized—own their online identities. “Web 1.0 was read-only,” Hochberg says. “Web 2.0, with the introduction of social media, was read and write. With Web 3.0, the leap forward will be read, write, and own.”

Sure enough, people will purchase Balenciaga hoodies for their Fortnite avatars. That’s easy money for companies. The avatar market was worth $10 billion in 2020 and is expected to reach $528 billion by 2030, according to market research firm Emergen Research. The trick is to get people to buy the threads IRL too. This is known as going “phigital.” “Short-term, we’re saying put Gabbana on your avatar,” Rowley says. “There’s a market for that—but not a big market. The bigger picture is to make the technology work so that we can go online to experience a product—and then order the real thing.” 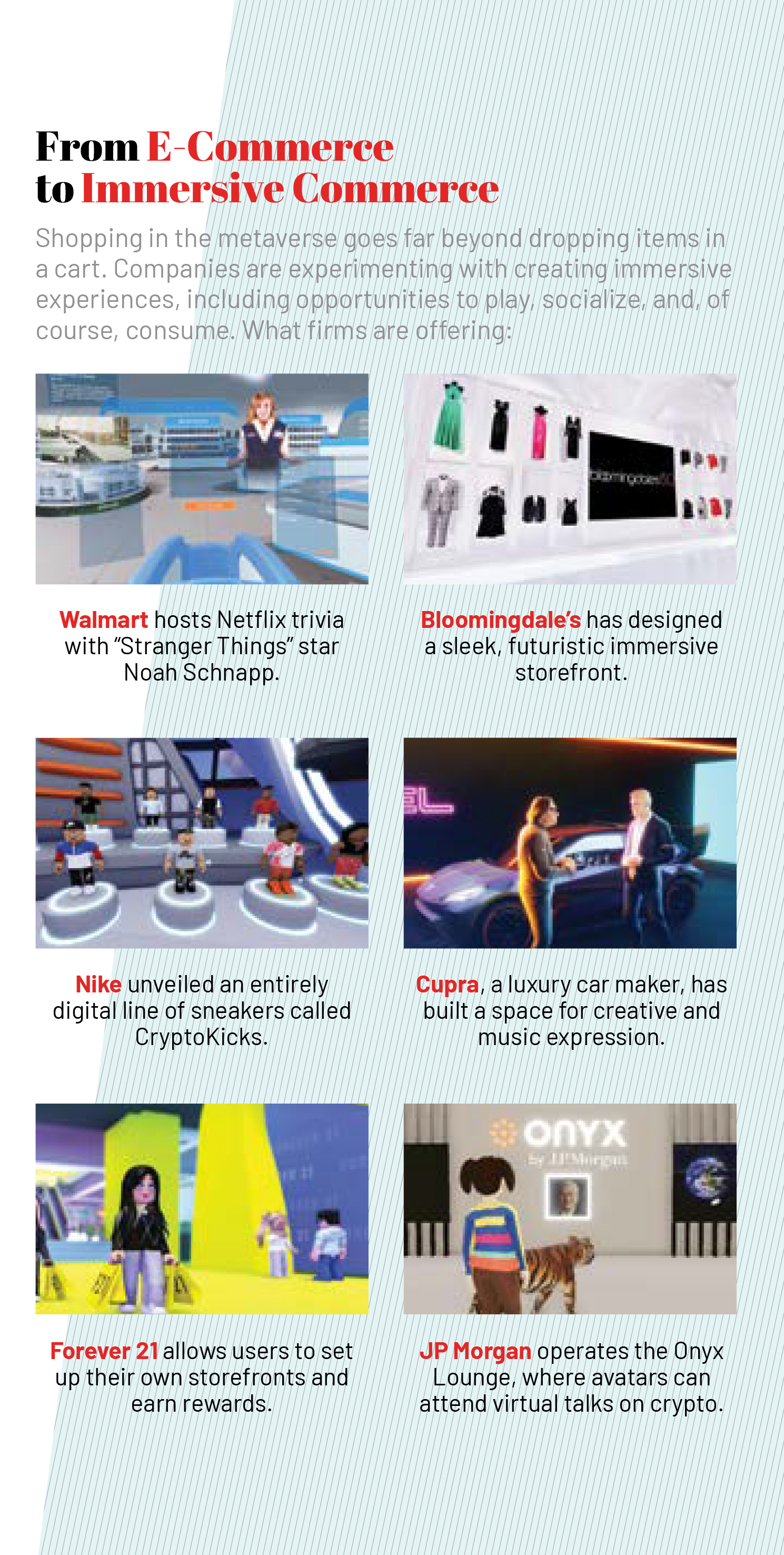 That’s the potential of the metaverse. We walk our avatar into a digital store, where we are greeted by a sales associate’s avatar. Then we stand shoulder-to-shoulder with other shopping avatars as we peruse the sale racks. We’ll be able to try on clothes and see our friends’ faces when we come out of the dressing room. Instead of a credit card, we’ll pay with crypto, which will serve as a global currency and a payment system much less vulnerable to fraud. The hope is that these technologies will be more sustainable—that they’ll reduce the $428 billion in annual product returns. Companies will be able to reduce waste on the front end as well by testing demand in the digital realm before stocking warehouses. Meanwhile, any purchase made in person will be tracked with QR codes and other digital footprints, allowing companies to capture the full consumer journey.

More than 100 companies have already set up storefronts in this alternate reality, including Nike, Walmart, and Forever 21. Even JP Morgan has moved into the up-and-coming virtual ‘hood. The new luxury-car brand Cupra, which first found success with live video shopping, has announced plans for METAHYPE, a space in the metaverse where people can create and share art, music, and style. Because consumerism is, at its core, about cultivating culture, and, culture, at its core, reflects the human desire to be a part of a greater whole.

“The bigger picture is to go online to experience a product, and then order the real thing.”

But as provocative as all of the hype is, big questions remain. Like: How, in a construct built with only sight and sound, will sellers replicate real-world exchanges, which since the dawn of civilization have relied on the spectrum of senses to evoke impulses of desire? (Research shows that fragrance alone elicits up to 75 percent of our emotional reactions.) Sure, the genre and tempo of ambient music can influence purchase decisions. But how do you convey the smell of a perfume on a screen? Or the feel of fabric? This is the new frontier in marketing.

Experts are testing how various color shades influence buying behavior (tip: digital storefronts should be well lit), and how to arouse salivary glands with a strategically placed image of a cupcake. “This is where the trickery comes in,” Adcock, the behavioral scientist, says. “If we can get them to hold a cold drink in their right hand, is that going to make them more likely to look at something on the left side of the screen, and can we trick the brain into compensating one sense for the other?”

There are questions about sizing, too. Retailers around the world are going to have to adopt standardized sizing for avatars so they can embody realistic representations. And the international governing bodies are going to have to figure out how to regulate borderless commerce. All of which is to say, we’re still not entirely ready to plug into the matrix.

Just a few years ago, merchants needed little more than a website and a shopping cart (or a Marketplace account) to sell their products online. Now chat apps, live streams, and voice technologies are becoming the standard. By 2030, Goldman Sachs predicts the metaverse will be worth $8 trillion. But right now it’s still an idea. “It takes time for mass adoption,” says Emma Fieldhouse, a digital content strategist. “Whether that’s five or 20 years down the line, we don’t know. What we do know is that the adoption of technology is only accelerating, so the breakthrough may come faster than many expect. Then it will be a race.”